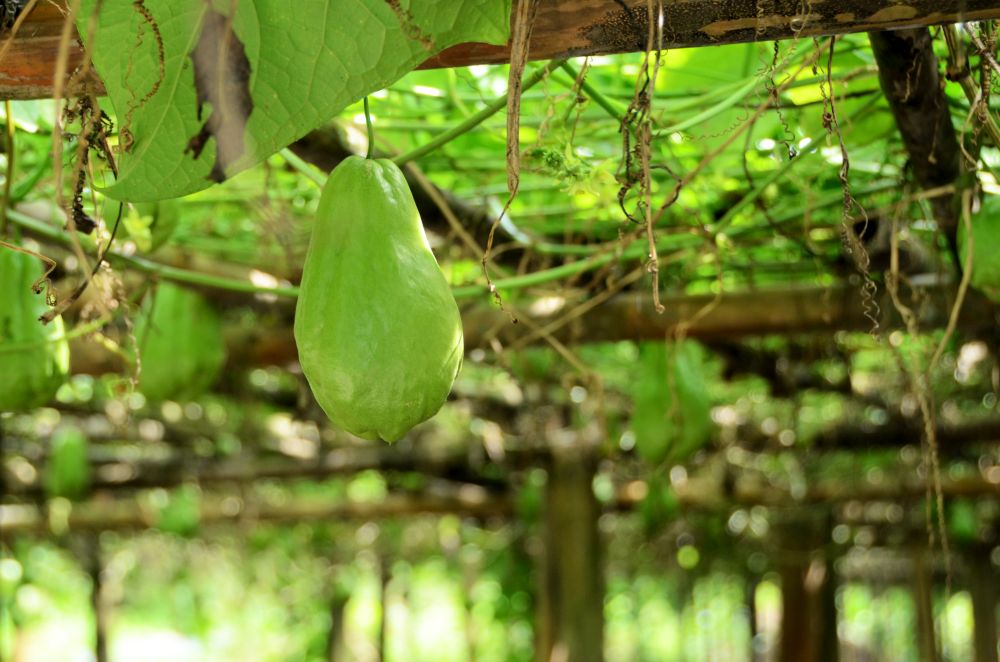 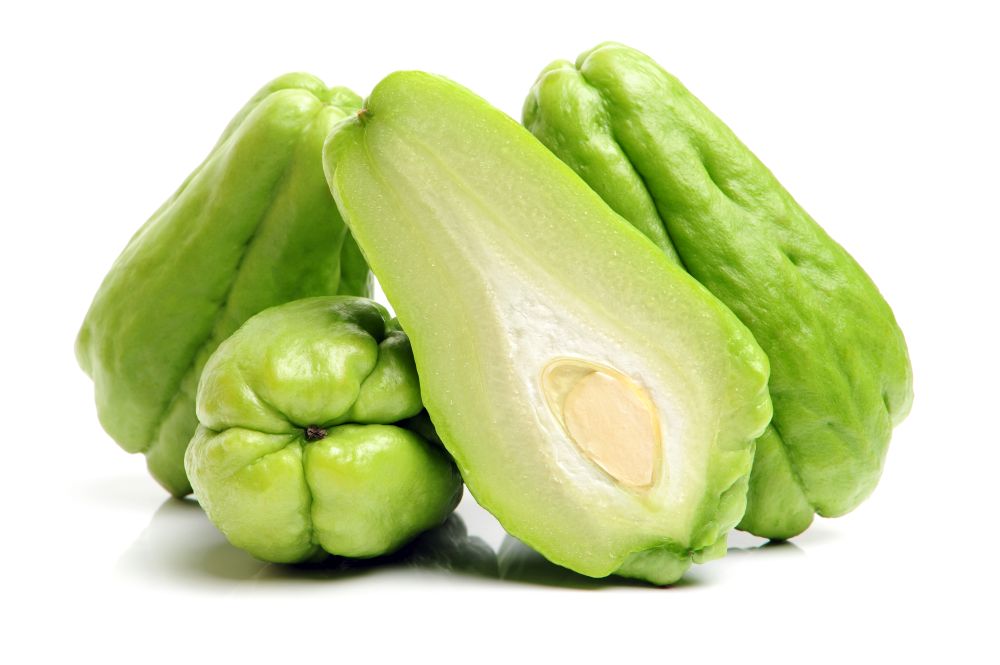 With firm flesh and subtle taste, chayote sneaks on your palate and overwhelms your taste buds with its delicate flavors. The squash-like fruits are packed with vitamin C, lots of fiber, calcium, and potassium. You can eat it raw or cooked. Boil it and mash it like potatoes or use it to make an apple pie without the apples. Some people stuff it with meat and make a sumptuous meal of the humble chayote. As for the leaves and shoots, they add flavors and a crunchy texture to your salads. 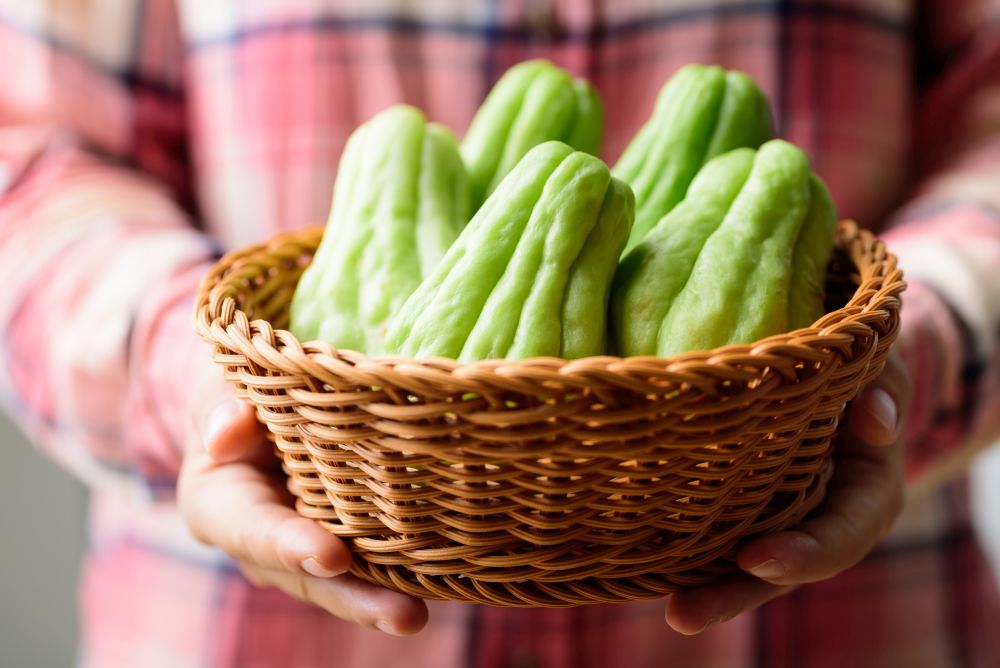 Mind you, it’s the small fruits that have all these goodies. The large fruits you find at the grocery store are mostly bland and lack the exquisite taste you will find in the young chayote fruits. But since it’s not easy to buy the young ones for obvious reasons (the fruits sell by weight), then you’ll have to grow them yourself. That way, you can harvest chayote fruits and enjoy their crisp and succulent flesh. Read on to find out more about this delicious veggie and the different varieties available for you to grow and harvest.

Along with tomato, chayote (Sechium edule) was one of the few plants that Christopher Columbus carried back to Europe from his travels. After failing to find a passage to India and the gold he had promised Isabella, the Queen of Spain, he offered a few veggies to placate the royal anger.

Chayote made its way across Europe slowly but back home, it spread across the Americas like wildfire. Soon it became a staple food for the different civilizations that had sprung all over Latin America. As a member of the gourd family, it tends to sprawl and requires a trellis or posts to support its vines. That’s important to keep the fruits off the ground and prevent rot.

The average chayote vine grows to about 36 feet high. The leaves are shaped like a heart and average about 10 inches wide. Both male and female flowers appear on the same vine, so you don’t need to grow more than one chayote plant in your garden. The male flowers appear in clusters, while the females are solitary.

After pollination, the female flowers develop a single fruit at the center of each flower. Unlike the smooth gourd, chayote fruits have deep wrinkles that give the fruit its singular shape. The skin is always green, even on ripe fruits, while the flesh is greenish-white. You don’t need to peel the skin. The whole fruit, except for the flattened pit, is edible.

After crossing the Atlantic, chayote veggies underwent some noticeable changes. And even the species that had traveled up and down the New World, became the subject of crossbreeding to create more productive crops. Much like squash, cucumber, and gourd, the new varieties are tastier and have softer flesh than the original species that were growing a few hundred years ago. And while most of the chayote varieties you’ll find at the store belong to the common species, there’s another type called wild chayote that grows in ravines and along river banks. The wild types are larger in size and sometimes covered with thorns. Here are a few common varieties that you can grow in your garden.

How to Grow Chayote

Although you can start chayote from seeds, that’s not the recommended way to go about growing this veggie. For one thing, this will take a lot longer to grow the vine. Besides, the germination rate of the flattened seed is close to zero to start with. Here’s an easier and more convenient way to grow chayote in easy steps.

Chayote, first and foremost, is a vine. And as with all vines, it needs extra attention when it comes to training and pruning the branches and new shoots. Besides water and fertilizing, the plant doesn’t need much care.

Chayote grows in rich and moist soil. Check the structure of the soil and if it’s poor or lacks the basic nutrients, dump a lot of organic materials into it. The richer the soil, the better the yearly crop you’ll get out of your vine. The soil should also be between neutral to slightly acidic. This means that the pH levels should average between 6.0 to 6.8. And for a plant that’s more suited for zones 7 to 10, the spot you choose for chayote needs to have full exposure to the sunlight. Chayote can still tolerate partial shade, but that will impact the productivity of the vine.

For a thirsty plant like chayote, you need to pay attention to the irrigation schedule. On average, you need to water the young plant about three times a week. Watering should focus on keeping the soil moist but not getting it thoroughly wet. It has a low tolerance to drought, so you should not let the soil go dry. You can factor in rainfall when scheduling your watering plans for the vine. But if the top one inch of the soil goes dry, that’s your cue that the plant is getting thirsty. If you allow more than one inch of soil to dry out, dehydration will turn the leaves yellow, and the vine will start to wither and wilt.

Besides being a thirsty vine, chayote is also a heavy feeder. It draws a lot of nutrients out of the soil and only thrives in rich soil. But as is the case with all perennials, the roots deplete the riches in the soil rather quickly. So before you plant the fruit, mix in plenty of aged manure and organic compost. After about six weeks, you’ll need to apply a well-balanced 10-10-10 fertilizer. You’ll need to repeat that every 6 weeks. Then in the middle of the summer, when the fruits are still small, apply a generous dose of compost and aged manure. Mix it well into the soil and water the vine.

As a fast grower, chayote demands your full attention in the first few months. You’ll need to train the shoots and make sure the vine is crawling all over the trellis but not outside of it. In the fall, after you’ve harvested the last fruit, you’ll need to give it a good pruning. Cut it back by about half to protect it against the cold winter and to encourage vigorous growth in the next spring. In cold zones, you might have to cut the vine down and cover it with mulch throughout the winter. It will grow back in the spring and reclaim all its territories.

Many pests attack chayote, but the two most prominent ones are aphids and striped cucumber beetles. Aphids are those tiny insects that feed on the sap in the leaves and young shoots. You can hose them off the vine with water or use neem oil to kill them. As for striped cucumber beetles, they are a more dangerous foe. They eat young chayote vines and cause a lot of damage to the foliage and crops. These beetles also spread bacterial diseases. So pick them by hand and drown them in a bucket full of a mixture of water and bleach.

Common diseases that affect chayote plants include bacterial leaf spots. The spots might also appear on the fruits, so improve the airflow around the vines and don’t get water on the leaves.

Timing is crucial when it comes to harvesting chayote. Luckily the fruits are ready to eat once they grow to about 4 inches in girth. Usually, the young veggies are sweeter and tastier than old ones. On average, a chayote vine will yield about 80 fruits. You can also collect the young and tender shoots and use them in salads.