Tropical plants are becoming part of every garden and houseplant collection all over the country. The bromeliad plant took some time to catch up since most people thought it was hard to grow. That’s not entirely true. Although the tropical bromeliad plant certainly needs rather high temperature and humidity, you can still grow it in your garden or home. Unlike other flowering plants, the bromeliad plant is not toxic and is safe to grow around pets. 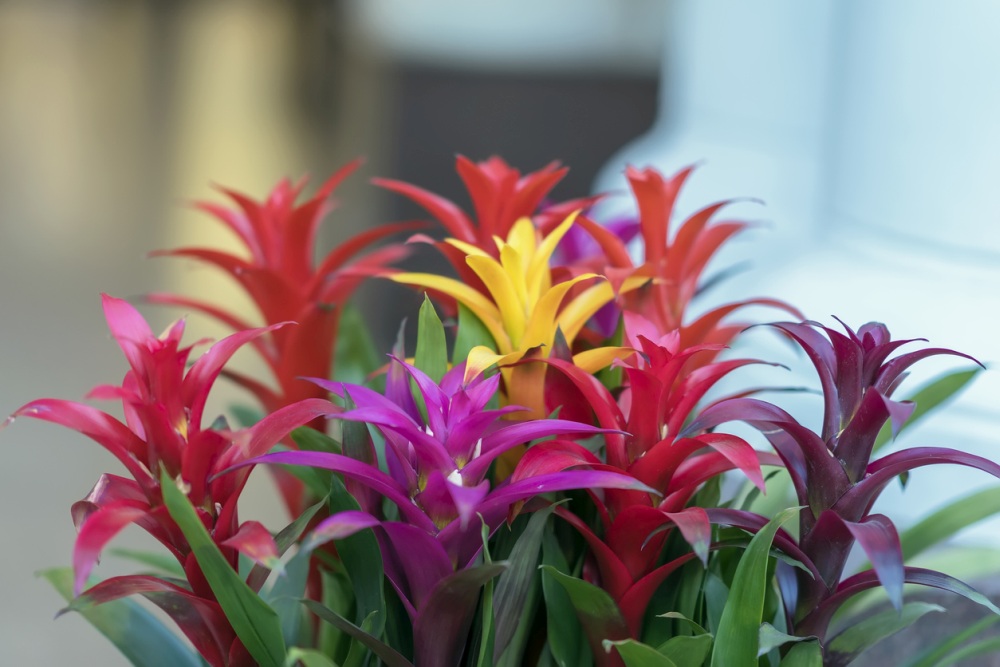 Truth be told, it’s easy to grow the bromeliad plant, but caring for it is a whole different matter. I think we can all agree that it’s a little fussy and would need a little bit of extra attention than your average houseplant. It also requires some gardening skills so it’s not recommended to start your tropical garden with the bromeliad plant.

The bromeliad plant (Bromeliaceae) is an epiphytic plant that uses its roots to hang on to other plants, rocks, and trees. In that aspect, they’re similar to orchids that need to latch on to something for support. So how do they get their nutrition if not from the roots? Usually, they absorb water and nutrients with their lush and large leaves.

The blooms of the bromeliad are both exquisite and breathtaking. The only problem is, some varieties will only bloom once in their lifetime. Some varieties of bromeliads are annuals and once they flower, they will die. So you’ll need to plant them every year. However, it’s easy to start these plants as we’ll see later. Other varieties are perennials and will hang around for years.

So which bromeliad varieties are best suited for your climate, geographical location, and gardening skills? While some varieties adapt well to your garden, others will only grow indoors and in certain conditions. As we mentioned, bromeliad plants are similar to orchids. That includes growing conditions and care as well. Here are the common varieties of the bromeliad plant you would consider to grow.

How to Grow A Bromeliad Plant

We mentioned that people have considered the bromeliad plant to be an advanced species that needs a highly skilled gardener to grow. But as we’ll see, there’s nothing special about growing bromeliads. The easiest way to plant them is by using their pups to grow new plants. Here’s how you can do that in simple and easy steps.

Perhaps the only difference between planting the bromeliad plant and many other flowering plants we covered here is the supporting stake. Other than that, the planting process is straightforward and simple. So what makes many people hesitate about growing this epiphyte? It’s the light, water, and pruning that need special care.

Watering for many plants is the lifeline that keeps them growing healthily. And with bromeliads, it’s no different. The only difference is, instead of watering the soil, you pour the water on the plant itself. This has to do with the way the plant absorbs water and nutrients through the leaves, not the roots. And that’s where watering the bromeliads differs from other plants. You need to keep the cup full of water all the time while the soil needs to be dry. Make sure the water is fresh. You might have to scoop the water out and replace it to avoid stagnation and fungal infestations. As a tip, avoid using tap water since the chemicals in the water damage the plant. Use filtered water or rainwater instead.

If watering the bromeliad leaves, not the soil sounds weird, wait until you hear about misting. The bromeliad plant thrives in high levels of humidity. Naturally, the air in your home is usually dry thanks to the air conditioning systems. However, some rooms in your house are more humid than others. The bathroom and kitchen are good examples. You can place the pot in either the bathroom or the kitchen so you won’t have to worry about misting it. If that’s not possible (as in if neither of those places has bright light) you’ll need to mist the bromeliad. You could also install a humidifier near the pots to maintain adequate levels of humidity.

While some varieties of the bromeliad plant thrive on a bright light, others tolerate dim to medium light conditions. However, they all share one thing in common. They don’t like exposure to sunlight for long hours. This leads to leaf burn which could prove fatal to the plant. If you’re growing it inside, then a grow lamp will give the bromeliad the right amount of light it needs.

The bromeliad plant takes good care of itself. Also, it doesn’t have a higher than usual growth rate, so you won’t have to worry about pruning. From time to time you would need to remove a dead leaf or get rid of a fading flower. But other than that, the plant will need as little intervention from you as possible. As long as its cup is full of water, it will grow happily.

Where there’s water, succulent leaves, tender hanging roots, and flowers, there will always be bugs and pests. That’s just a fact of the gardening life that every gardener knows and accepts. The most common pests that assault your bromeliad plant are mealybugs and scales. Neither of them is a bug to tolerate. So use neem oil to kills these bugs before they spread and become a risk to the plant. If you don’t’ have neem oil, just dip a swap in rubbing alcohol and give the bromeliad plant the full treatment. It’s not recommended that you use chemical pesticides since the bromeliad is sensitive to chemicals that could kill it.

How to Grow Bromeliads at Home

Guzmania Plants – How To Grow And Care For Guzmania Bromeliads