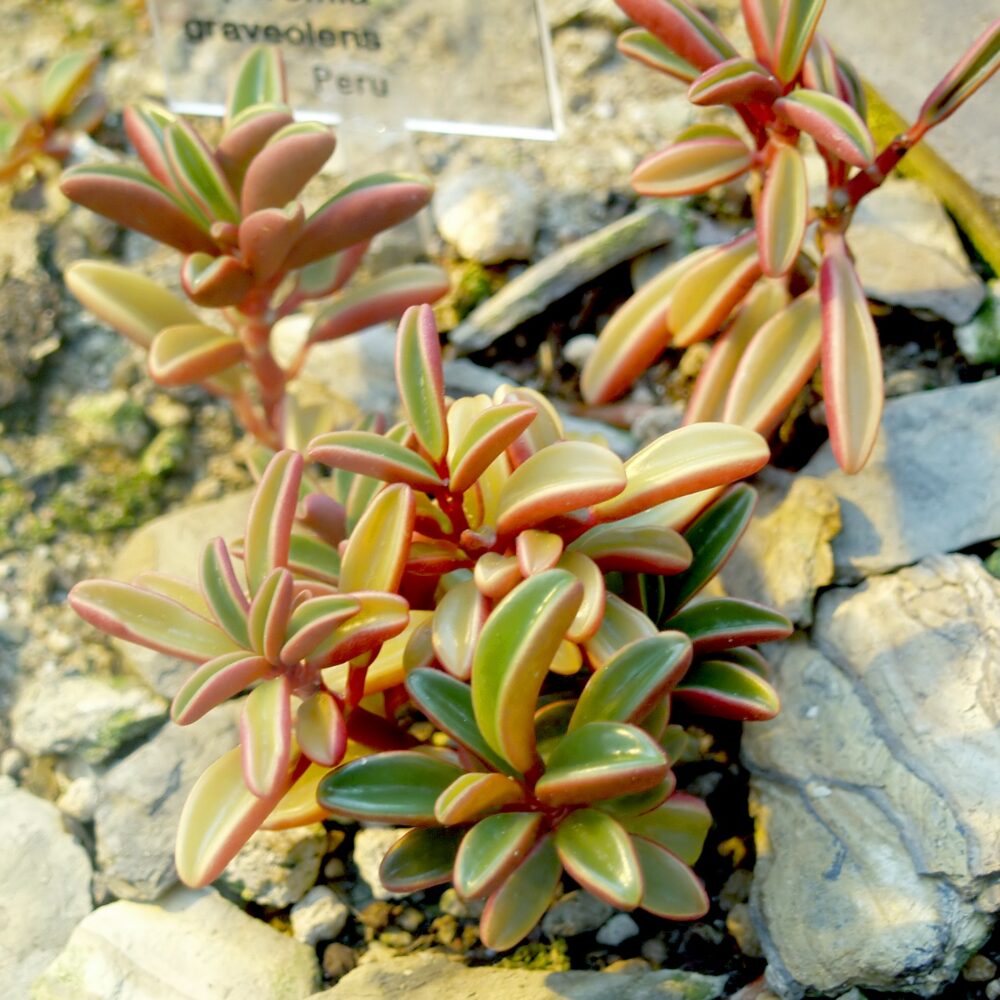 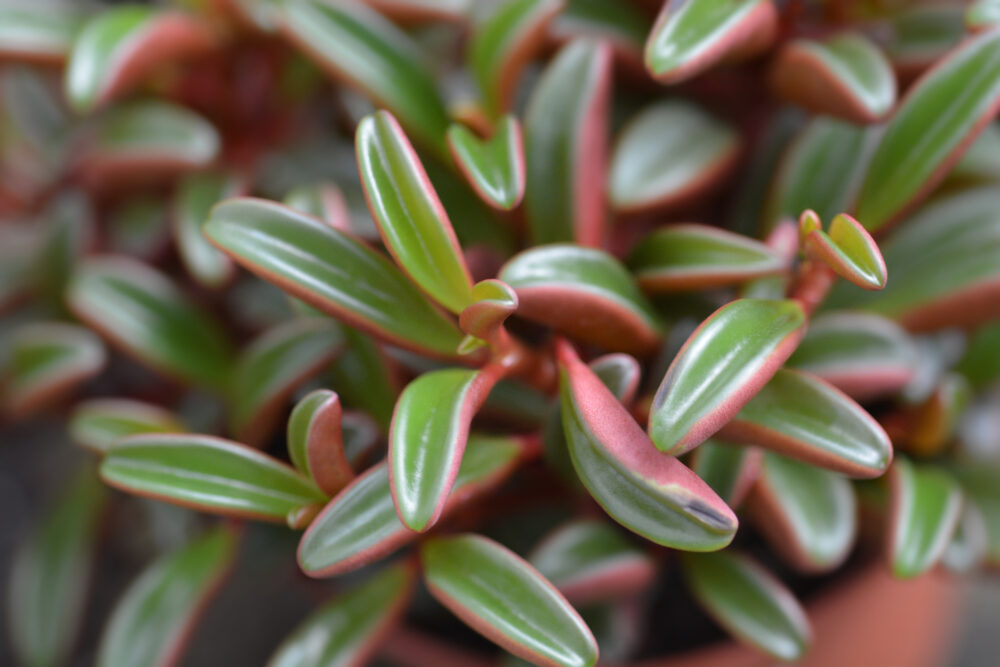 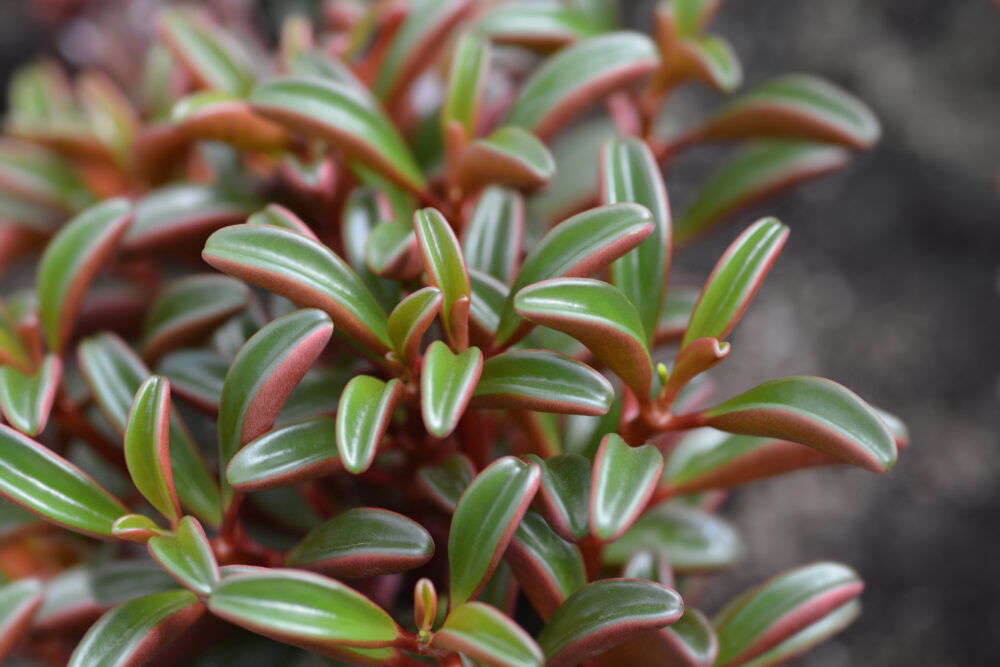 Nothing interests many first-timers when it comes to growing a houseplant than starting out with a succulent. Succulents are unfussy and not easy to kill. And as far as tolerance goes, the Blue Glow Peperomia, also known as Graveolens Peperomia, carries so much dominance that remains uptight even when the growing conditions seem significantly unfavorable. 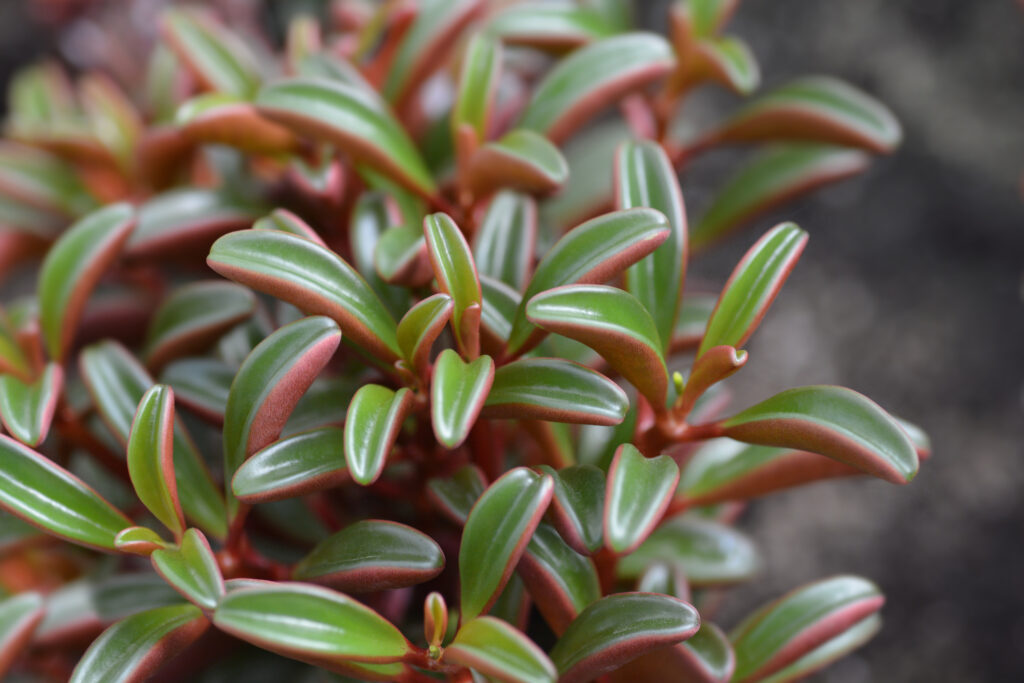 This member of the Piperaceae family has a number of vibrant attributes that make its routine maintenance come with less effort. Read on to learn the ropes and know to care for your Blue Glow Peperomia using the right nurturing conditions.

More About the Blue Glow Peperomia

This shrub-like succulent is a petite type that holds V-shaped leaves attached to pink stems. And that’s what mostly makes this species from the Piperaceae family be grown as an ornamental houseplant. It’s natively from the tropical parts of southern Ecuador, making it tolerant to warmer temperatures.

On average, this epiphyte would grow up to 10” inches in height but can grow a little taller when grown indoors since it will elongate in search of light. Peperomia graveolens isn’t only grown for its glowing red stems and wine-red succulent leaves, but also due to its capacity to live with less and adapt to the photosynthesis process quite well.

Apart from Graveolens Peperomia, the other two common names you’ll hear it being referred to as quite often are ‘Ruby Peperomia’ and ‘Ruby Glow Peperomia’.

This perennial epiphyte from the Piperaceae family blooms raceme flowers that resemble a rat’s tail. On average, the flowers would grow up to inches and have a powdery lime color that looks faint at first glance. In the later stages, they’ll become yellowish-white and grow on the edges or tips of longer stems on the plant.

Don’t expect to smell any fragrance coming from the flowers of your Ruby Glow Peperomia. But if you smell them close enough, you’ll probably be hit with an awful odor. In actual fact, “graveolens” is an old word that means bad smell.

Your Ruby Glow Peperomia will do well in soil that’s evenly moist especially during the warmer months. Aside from topdressing the potting soil with organic compost to make it nutrient-rich, you’ll need to make sure it drains wet. And one of the easiest ways to achieve that is by adding peat moss. In most instances, a functional succulent mix is usually made of one part of perlite or sand, together with two parts of peat moss.

Even though this Peperomia type prefers to be root bound, don’t miss to use a growing pot with enough drainage holes to let out any excess water that would cause the roots to rot. Repotting should ideally be done anytime around the spring season when the growth hormones are densely active. Remember to replace the old potting soil with one that’s revitalized with nutrients and tweaked to help with the drainage process.

Since the Ruby Glow Peperomia natively comes from Ecuador, it would naturally prefer to grow under warmer conditions. It can’t withstand temperatures that fall below 12°C but can keep up with a warm and humid temperature, so long as it doesn’t get entirely dry. Besides using well-draining soil, you want to place the growing medium somewhere with sufficient access to bright light.

So, the most ideal location would be placing the container near a north or east-facing window. You can also opt to grow your Ruby Glow Peperomia under artificial grow lights. Try to keep the room temperature between 18°Cand 24°C, to give your Peperomia graveolens the prototypical growing conditions it’s natively accustomed to. 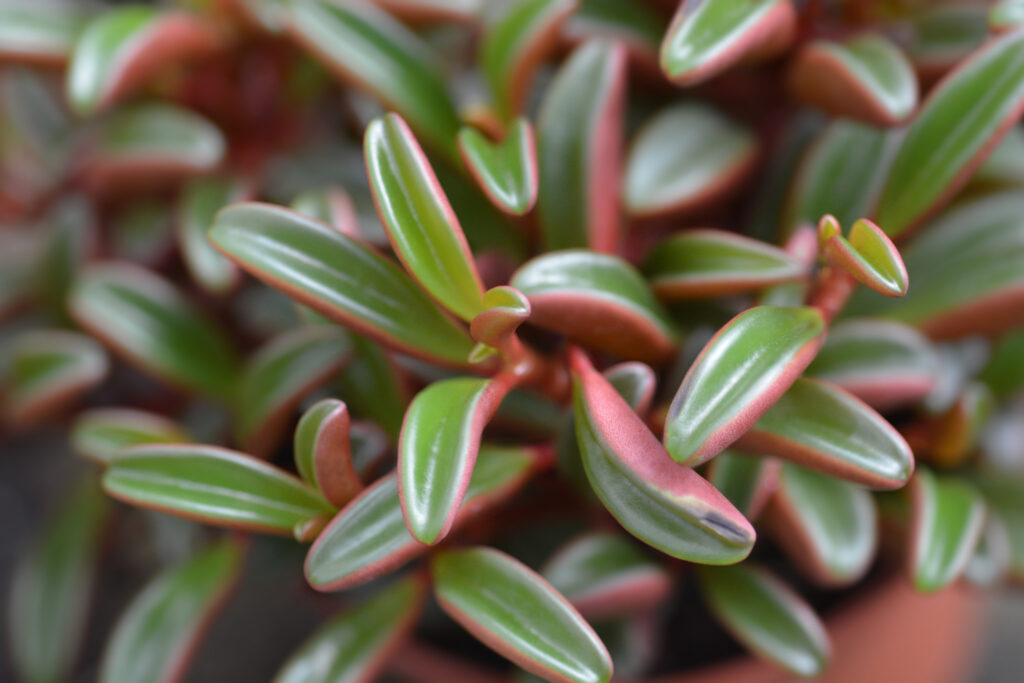 The watering intervals need to be routinely aligned and try to keep the soil moderately moist. Always remember to check whether the first few inches of the topsoil are entirely dry before watering your Ruby Glow Peperomia again. Lessen the number of times you water this epiphyte during winter.

A thick waxy coating forming on the leaves could be an effect of overwatering, so you want to watch out for such signs while grooming your houseplant. It’s quite normal for it to shed the bottom leaves, but if the dropping is intense, you want to check if you’re using the right fertilizer and whether the temperature and conditions are favorable.

Another cause for this condition would be if the growing pot doesn’t have enough drainage holes to let out excess water. As a plant natively accustomed to tropical conditions, you’d expect it to get through higher humidity levels. But there’s no great need for making adjustments since it can as well withstand lower levels of humidity.

Even though succulents are known for being hardy and tolerant to grinding conditions, it’s quite essential to use the right blend of formula when it comes to its feeding needs. You need to use a low-balanced soluble fertilizer, preferably one with an 8-8-8, or 10-10-10 formula on the label. Use the fertilizer at half strength since the feeding needs for most Peperomias tend to be minimal.

To control its shape and appearance, you’ll need to prune your Ruby Glow Peperomia quite a few times every growing season. One thing you’ll note about the foliage and leaves is they grow in different shapes and sizes.

Some leaves will look fleshy while others will appear faintly pale, depending on whether they have a single or different color shade on the foliage. When trimming the tips, it’s best to start with the leaves on the base part since they tend to lose their vigor the most, compared to those on the apex part of your Blue Glow Peperomia.

Apart from the severe effects of overwatering, there seem to be other major diseases you’ll need to grapple with. You’ll, however, need to watch out for yield-suppressing pests such as whiteflies, mealybugs, and spider mites. To find out whether your Peperomia houseplant has been infested with any of these pests, look out for any unusual spots on the leaves.

While that could be a sign of a pest attack, you also want to avoid keeping the soil overly moist, especially when the temperatures are too cold. Dip cotton swabs in alcohol and used them to get rid of any visible mealybugs. Repeat the exercise at least once or twice every week until the affected areas begin to show major improvement.

How to Propagate Your Ruby Glow Peperomia 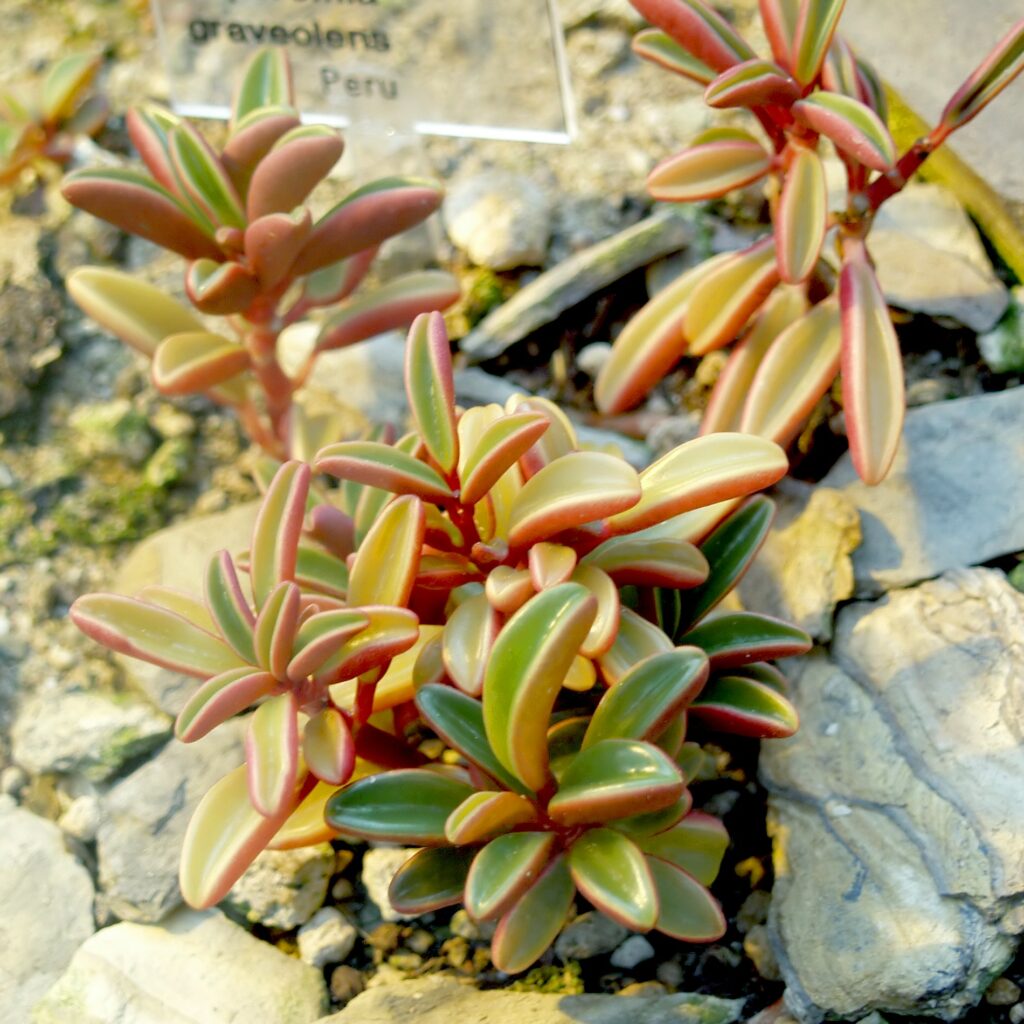 One of the most practical ways to propagate your Ruby Glow Peperomia is using stem tip cuttings. And when carrying out the propagation exercise, you just need to:

It’s also worth noting that you can propagate your Ruby Glow Peperomia using leaf cuttings. If you’re looking to Graveolens Peperomias in your garden or indoor space, you can try out the two propagation methods so you can know which one yields the best results.

In most instances, the Ruby Glow Peperomia looks a lot more graceful when grown indoors. They don’t grow beyond 12” to 18” inches, making them suitable for any setting. You can place it on your home office desk, windowsill, or dining table. It can also look stunning inside a hanging basket. Being a hardy succulent, it can survive quite well while sitting on your balcony or when used as a potted plant to level up the appearance of common areas such as sidewalks or hallways.