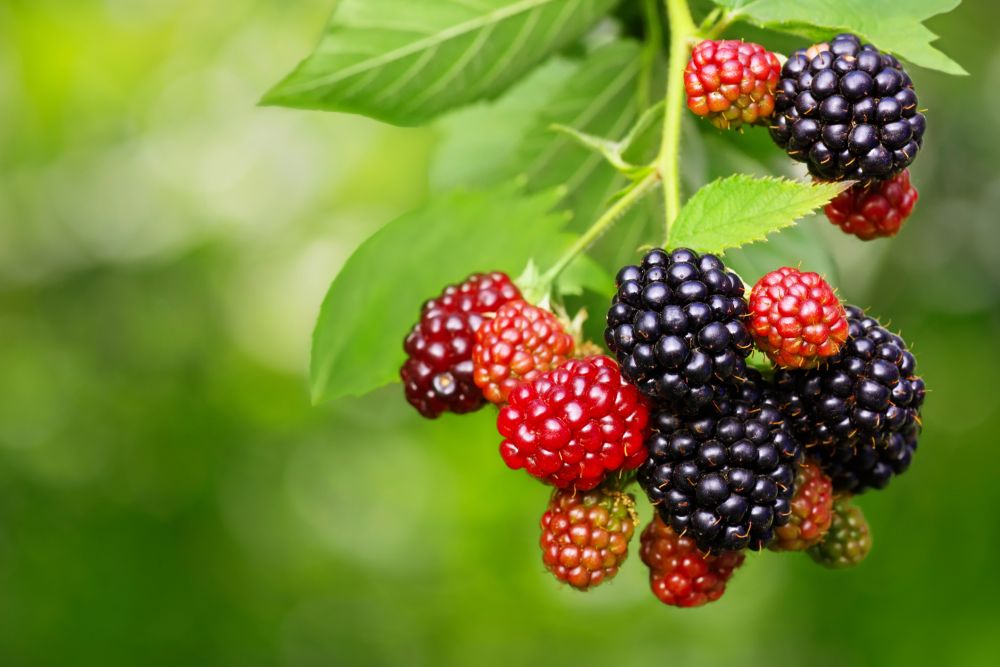 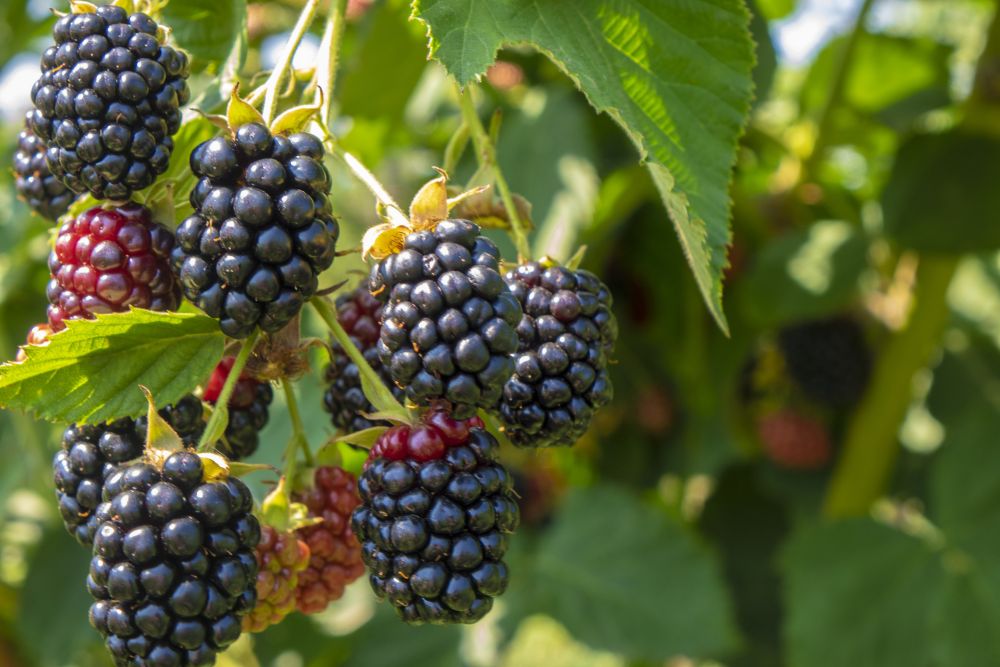 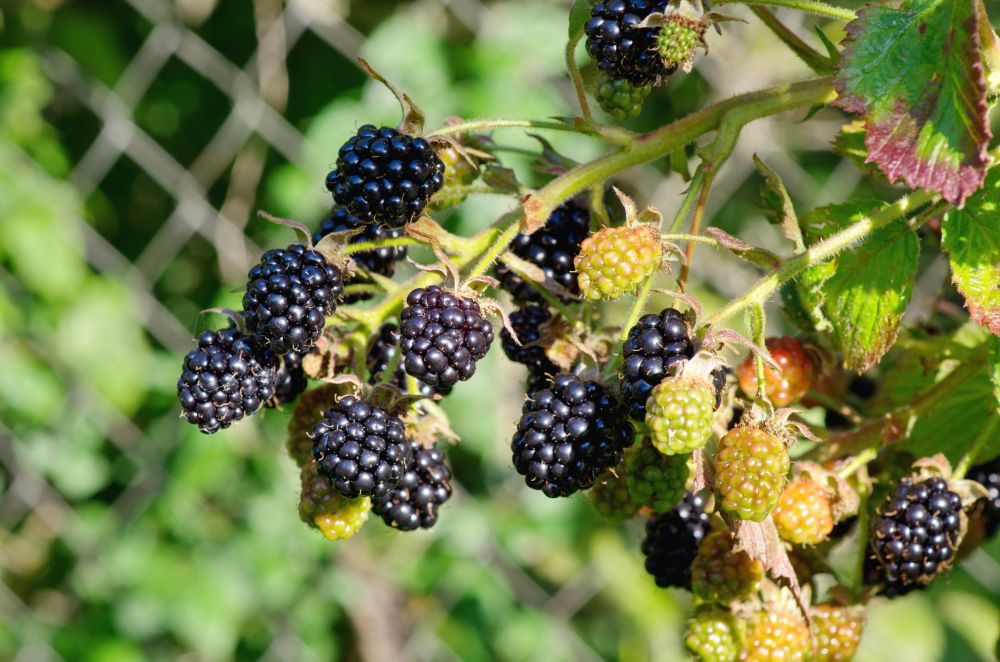 The blackberry is the type of plant that can get out of hand very quickly. For all its sweet fruits, the plant has an amazing growth rate that it can turn into an invasive plant pretty quickly. On average, it reaches its full height within the first year and from there on out it focuses on spreading out and propagating. 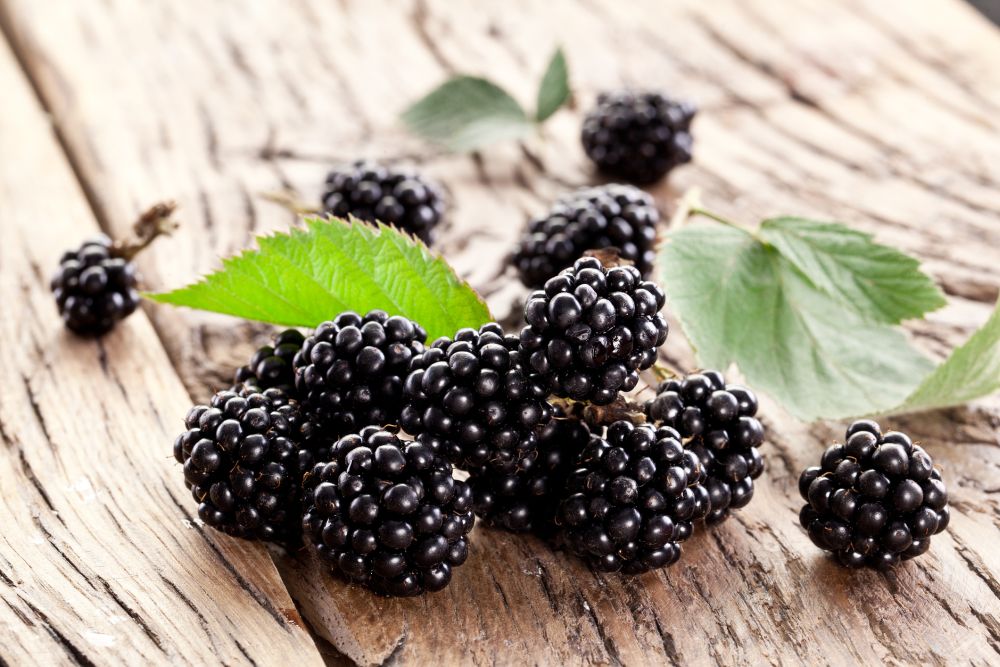 So if you’re planning on growing blackberries in your garden, be prepared to do plenty of pruning and maintenance to manage the growth and spread of the plant. Whether you’re growing the bushy or the trailing type, blackberries are rather demanding and need a lot of work. So if you’re ready for your adventure with these fruits, read on to find out how to grow, care for, and harvest them.

Despite the name, the blackberry (Rubus Fruticosus) is not a berry at all. The knotted black crop is actually a fruit. The small and sweet fruits are packed with vitamins C and K and have high fiber content. Eating blackberries on a daily basis might boost your brain health as well as your oral health. You can use them in fruit salads, desserts, smoothies, and ice cream.

On average, the blackberry will reach about 18 feet high. The stems of the plant are called canes and either grow erect or trail on the ground depending on the type of blackberry you grow. Once it has reached its full height in the first year, the blackberry develops lateral shoots and spreads out to claim every inch of garden real estate you have.

The compound leaves on the main cane are usually large with seven leaflets while those on the lateral shoots are smaller and have about 3 leaflets each.

A native of North America, the blackberry is suitable for zones 5 to 8. And thanks to their dense foliage, regular pruning is necessary to keep the plants manageable. They flower in the late spring or early summer. The white or pink flowers are about one inch in diameter. They need bees to pollinate them and poor pollination is one of the main reasons many blackberries don’t produce.

With hundreds of cultivars and hybrids, you won’t lack options when it comes to finding a blackberry variety that works for you. But rather than listing some of the most popular cultivars as we usually do, we’ll classify blackberries by type instead. That will help you select the right variety based on the amount of work you plan to put into growing it. Here are the main blackberry types.

How to Grow Blackberry

Since each blackberry type has some quirky qualities that require specific growing and caring steps, we’ll focus on the general steps that apply to all types. If you choose a specific cultivar, make sure to follow the instructions for planting it. Here’s how to grow any type of blackberry in your garden.

While ensuring that bees are doing a good job pollinating the flowers would be a top priority, blackberries are also demanding in terms of water, fertilizer, and pruning. To say they are a handful is an understatement. But with proper care, you can ensure that these perennials will keep producing delicious fruits for about a decade or so.

Perennial plants require rich and well-drained soil. The only exception is aquatic plants that thrive in wet or waterlogged soil. But the blackberries don’t like to get their roots wet so the soil has to have good drainage. If your garden is mainly clay or heavy soil, you can amend it or plant the blackberry on raised beds instead. This automatically improves drainage and soil aeration. If the soil is loamy, then you don’t need to amend it. Use mulch to retain moisture in the soil and prevent the spread of weeds which could be quite competitive and impact the growth of the perennial. As for soil pH, it should be between 5.5 to 7.0 which is slightly acidic to neutral.

When it comes to watering, you should err on the side of caution. The Blackberry only needs one inch of water per week during the growing season. If you live in a rainy area, you need to factor the rainfall into your irrigation. Check the top two inches of the soil with your finger and make sure they are dry before you water the plant. Overwatering can cause many problems and leads to root rot. It also keeps the soil wet which encourages fungal spores to infect the blackberry. Water deep and aim for the roots. The best time to water blackberries is in the morning. Once the plant goes dormant in the late fall, hold back the water until the next spring.

Your blackberry is a heavy feeder. It needs a lot of nutrients to support its phenomenal growth rate and keep its bushy canes growing. Nutrition is also important for a sweet and abundant crop. You should start off the season with a well-balanced 10-10-10 fertilizer in the spring. Apply it as soon as the blackberry shows signs of new growth. Side dress with organic compost and aged manure especially before flowering and as the first fruits are about to develop. After harvesting, hold off fertilizing until the next year. If you fertilize the plant after pruning, that could trigger new shoots that would die in the winter.

That’s where things get a little interesting. Every fall after the last harvest, you’ll need to cut away all the canes that were carrying fruits. Don’t trim first-year shoots since they will bear fruits next summer. Instead, cut off the tips of the new shoots to encourage them to branch out. On average, your mature plant should be cut back to about 4 to 5 main canes. In the spring, check on the plant and remove any broken or damaged canes. How often you need to prune your blackberry depends on the type and maturity of the plant. Erect types are bushy and have an aggressive growth rate. So you’ll need to prune them once or twice a year to keep them manageable.

As for diseases, the most common ones are gray mold, stem blight, anthracnose, and crown gall. Some viruses such as the blackberry calico virus and the raspberry bushy dwarf virus can have a devastating impact on the plant. Growing disease-resistant cultivars is the best way to avoid these serious and sometimes fatal diseases.

Harvesting blackberry fruits can be a little tricky. For one thing, the fruits can look very much ripe even though they still taste sour. Once picked, the fruits will not ripen anymore so you need to make sure they are sweet before collecting them.

Some signs your blackberry fruits are ripe include the skin is deep black and a little shiny. The fruit feels firm between your fingers but when you yank it off the cane, it comes off easily. If you need to twist it a little, the fruit is not yet ready.

Blackberries don’t ripen all at once. So your harvesting will be done in batches about once every couple of days. Use your hand to gather the delicate fruits and don’t remove the central plug from the fruit. You can harvest either in the early morning or in the late afternoon when the temperature is at its coolest.

To store the harvested blackberries, keep them in the fridge as soon as you gather them. They have a short shelf life and you have a few days to consume them fresh before they perish.

Blackberry Growing Problems: How to Fix All Issues