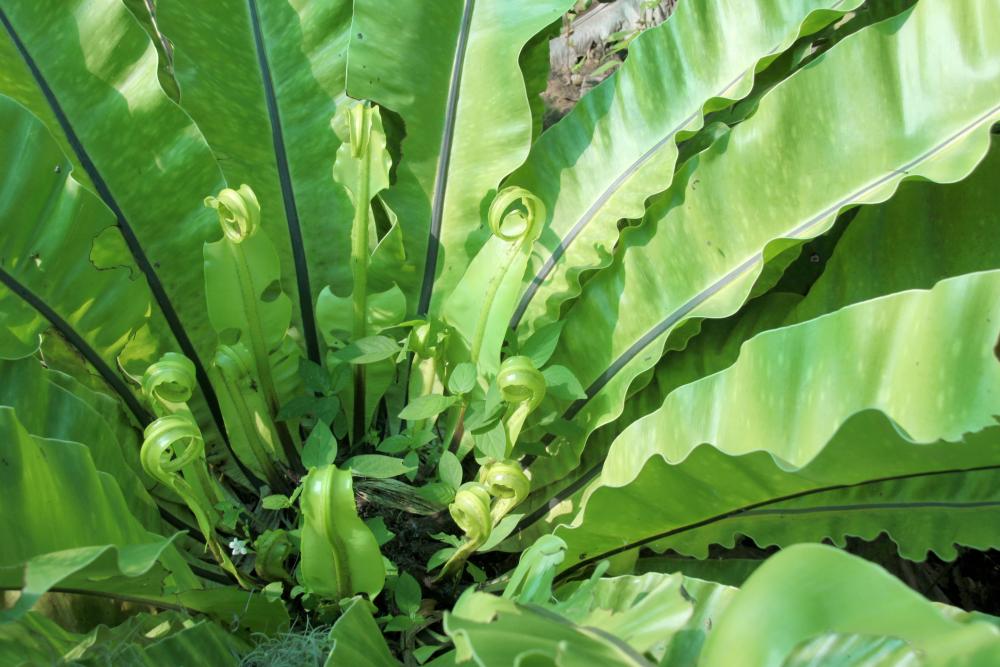 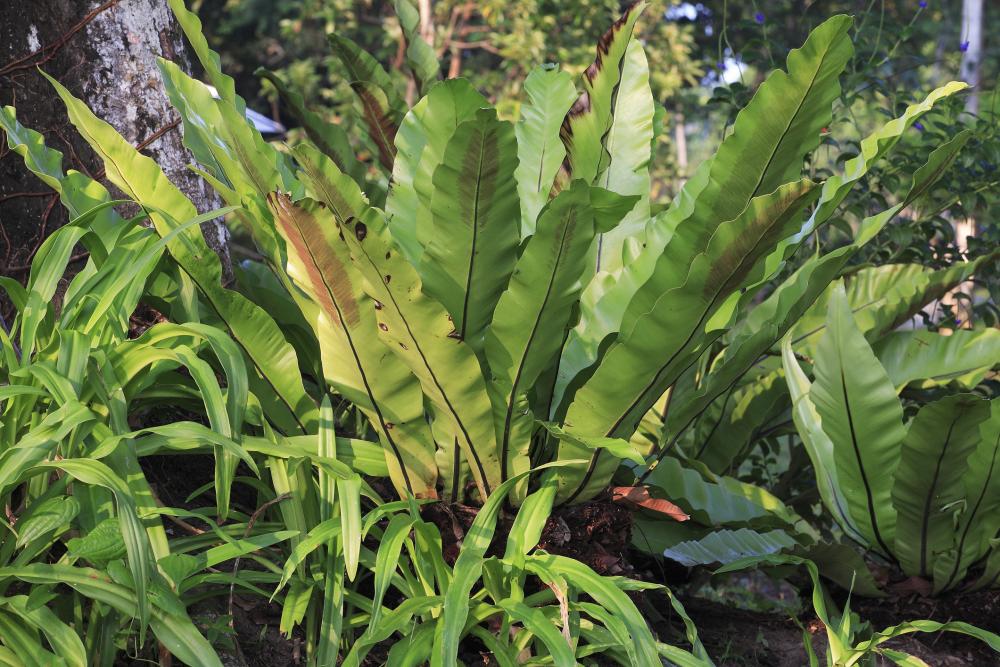 Bird’s nest fern is an ideal plant to grow indoors. As a potted houseplant, it has all the advantages of the lush and ornamental ferns without the hassle of pruning, feeding, and other care tasks ferns are famous for. That’s because the bird’s nest fern is easy to grow and is low-maintenance. 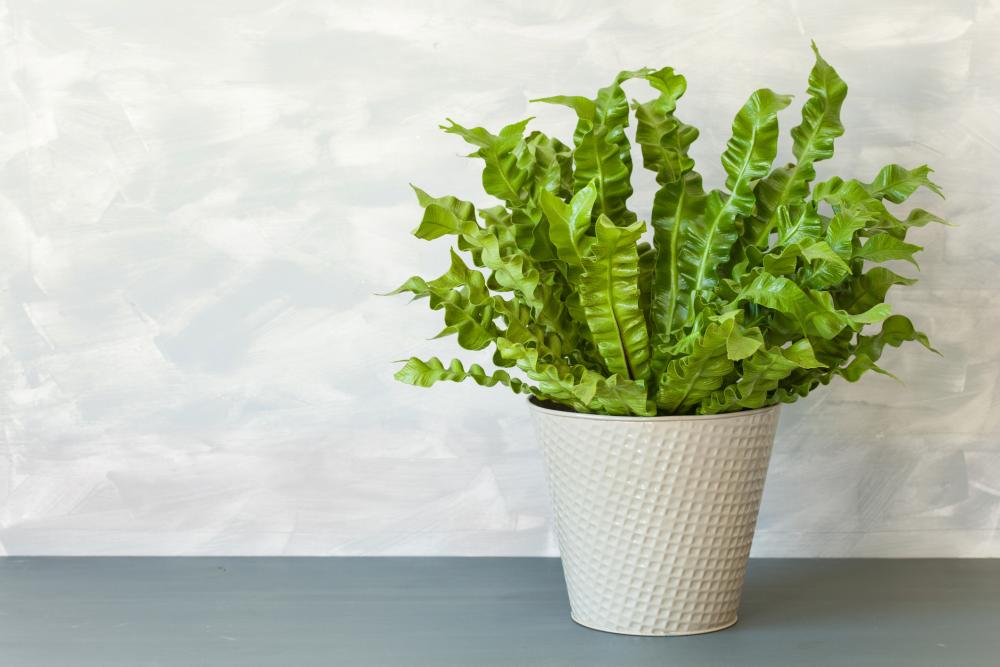 Another advantage to this fern and one of the reasons for its sweeping popularity is that it comes in different varieties. Some fern varieties are more suitable for an office environment with its dim light and low humidity while others cannot do without the sun, fresh air, and a decent level of humidity in the air. So you always have a choice when it comes to the different bird’s nest fern varieties. Not just that, but the different cultivars also have colorful foliage and can be a great addition to the setting and atmosphere.

Crissie or Asplenium Antiquum Crissie as hardcore botanists like to call it is a very inviting plant with its open bowl shape and crisp and divided leaves. To be honest, there’s nothing not to like about this Crissie. It’s not demanding in terms of light, soil, or nutrients. It’s also hardy to drought and if you’re the forgetful type, it will forgive some neglect.

Not only that, but Crissie is also suitable both for indoor and outdoor growing. It will thrive in a pot on a window sill as much as in your subtropical garden. It’s hard to imagine this plant looking out of place anywhere you put it. Whether in the kitchen, the bathroom, or the living room, it adds a lush green atmosphere and a calming ambiance to any setting.

The average Crissie grows between 15 to 21 inches at most. You can start it in a 5-inch pot and repot it every couple of years, increasing the pot by one size every time. And while it can handle regular soil from your garden, it’s best to make your own potting mix. Use cocopeat, vermicompost, perlite, and charcoal chips along with potting soil in equal measures to create the ideal growing medium for your Crissie.

It doesn’t need a lot of watering and you should allow the soil to dry out in the pot between irrigations. And as long as you keep it away from direct sunlight you won’t have a problem with this fern.

Another bird’s nest fern cultivar with unique and distinctive foliage. The dark green leaves are so curly you might mistake them for the leaves of an overgrown parsley herb. This decorative and shade-loving cultivar grows well indoors as well as in a shaded spot in your patio or even on the branches of trees. You can also hang it on a green wall or dot the corners of your subtropical garden with it. With all these different design uses, Leslie is a low-key ornamental plant that doesn’t need much care nor does it make a fuss when you forget to water or feed it.

Similar to Crissie, Leslie is the kind of cultivar that thrives in indirect bright to medium light. If you place it on a window sill make sure it’s facing either the north or east. Otherwise, you would need to draw a lace curtain when the sun gets intense in mid-day and the afternoons.

It also requires a potting mix that is based on perlite and vermicompost along with organic materials to improve drainage.

Leslie has the same size as Crissie and will not grow an inch above 21 inches no matter how hard you try. And because of its curly foliage, it’s better to keep it compact.

An epiphyte fern that hails from Japan and is grown for its light green leaves with ruffled edges. As a perennial, it matures quickly and reaches its maximum height of 3 feet within the first year of its life. The rosette also spreads out and has a similar width of 3 feet.

This variety is also easy to grow and prefers well-drained soil. That said, it will grow just as well in your garden soil as in any custom potting mix you design. If you choose to make your own potting mix, add more charcoal chips and coco peat to improve the drainage of the soil and reduce the risk of the soil staying wet for a long period of time.

As an evergreen variety, Osaka first produces yellowish-green leaves that mature into deep and rich green shades. You can grow it both in full sun or partial shade as the plant has good tolerance for different light conditions. This makes it ideal both as a house or office plant and an addition to your tropical garden.

Water the pot about a half-inch of water every week during the spring and summer and cut the watering by half during the fall and winter.

This fern got its delicious name from the meaty fronds with deep grooves and ruffled edges. But unlike Osaka varieties, the Lasagne Fern has glossy fronds that shimmer in the light. The middle of the leaf is creamy yellow and the ruffled edges turn into deep wrinkles toward the tip of the leaf. So it’s not an easy plant to miss as it stands out among other ferns.

What gives the fern such a prominent disposition is the erect rhizome. Along with the leaves and rhizome, the Lasagne Fern will average anything between 1.5 feet to 2.8 feet when fully mature. It also has a spread that matches its height.

The large rosette is the first to develop out of the rhizome and then the meaty fronds grow in a full circle. Each leaf can reach between 1 to 1.2 feet long. You can grow it in the garden without having to amend the soil unless it’s heavy and poorly drained. Add some perlite and organic materials to improve drainage. You can also grow it as an indoor plant or use it to add an exotic flair to the landscape. It has average water needs just like many other garden plants with a water quota of one inch per week during the spring and summer.

This epiphyte variety is native to the tropics between Sri Lanka to Polynesia. That said it has adapted well to subtropical and monsoonal climates. Unlike other bird’s nest fern varieties on this list, Parks’ Asplenium is a compact fern that doesn’t grow above one foot when fully mature.

This fern also develops a rosette from which the fronds grow and form a bowl shape. Each frond will have anything from 20 to 40 leaflets. The leaflets average about 1.5 inches long and a half-inch wide.

In its natural habitat, Parks’ Asplenium can be found growing at the base of trees and on the edges of tropical forests. That explains the plant’s preference for partial shade and dappled light. If you want to grow it in the garden, make sure it’s protected from the intense afternoon sun. The same applies to indoor growing. Keep it away from windows that get mid-day sun.

This fern variety is ideal for small gardens, as a houseplant, and in offices. It doesn’t require much care and its watering needs are medium to minimal.

The common name for Asplenium viviparum is Mother Fern. It’s a herbaceous plant that thrives in tropical climates. As a perennial plant, it grows tall and spreads itself in every direction by the time it turns into its second year. The average height of the plant is 2 feet and grows to 3 feet in diameter. This height can be attributed to

The foliage of this fern is rather curious in many ways. For one thing, it doesn’t develop fronds out of the rosette. Instead, it grows aerial plantlets out of the middle of the foliage. The plantlets start as round and curved but then grow lobes and their light green colors turn darker shades of green.

When it’s fully mature, the fern has very decorative values and since it keeps its leaflets all year round, it’s ideal for indoor as well as outdoor settings. Plant it around the gazebo, or dot the corners of the deck with the potted Mother Fern to get the most out of the green foliage.

It favors partial shade or even full shade over direct exposure to the sunlight. So avoid placing it on window sills. For outdoor growing, keep it in the shade of larger plants or near the base of trees.

Another fern variety that grows originally in Japan and Indochina. This perennial is a showboat and likes to get all the attention wherever you grow it. It’s ideal for small tropical gardens as well as spacious landscapes and indoor growing. As long as you provide the specific growing conditions that the plant thrives in, you won’t have trouble with it.

The first of these conditions is moist soil. Unlike other ferns, Kunze prefers moist soil and has little tolerance for drought. So it’s not the kind of plant that you grow and forget to water it or care for it for weeks on end. Its ornamental foliage will suffer and it will lose most of its beauty due to the stress.

As a small and compact fern, Kunze doesn’t grow above 10 inches high. The small leaves grow out of the rhizome and reach about 4 inches when fully mature.

And even though it prefers moist soil, you don’t have to water it all the time. Just allow the top one inch of the soil to go dry before you water it again. Keep your watering shallow and close to the base of the plant to avoid issues with fungal infections.

This cultivar is similar to both Leslie and Crissie. The similarity is not in the appearance, however. Rather it’s in the growing conditions. Native to the Philippines, this fern has pale green fronds with reddish to brownish hues. It’s very ornamental in the right light and can serve as a background for more showy ferns or even flowering plants.

All the fronds grow out of the rhizome which is semi-hidden in the soil. However, the erect fronds really steal the show as they mature and acquire their colorful shades. The mature plant averages less than one foot and stays compact with fronds rarely spilling out of the pot.

It has a high tolerance for drought and prefers dry soil over moist one. So you’ll need to allow the pot to go fully dry before you water the plant again.

The two things to be wary of when growing the Silver Wing are sunlight and humidity. The fern prefers partial shade and indirect light over the exposure to the harsh light of the sun. It also needs good air circulation since high humidity is the main cause behind many of the bacterial and fungal infections that this fern suffers from.