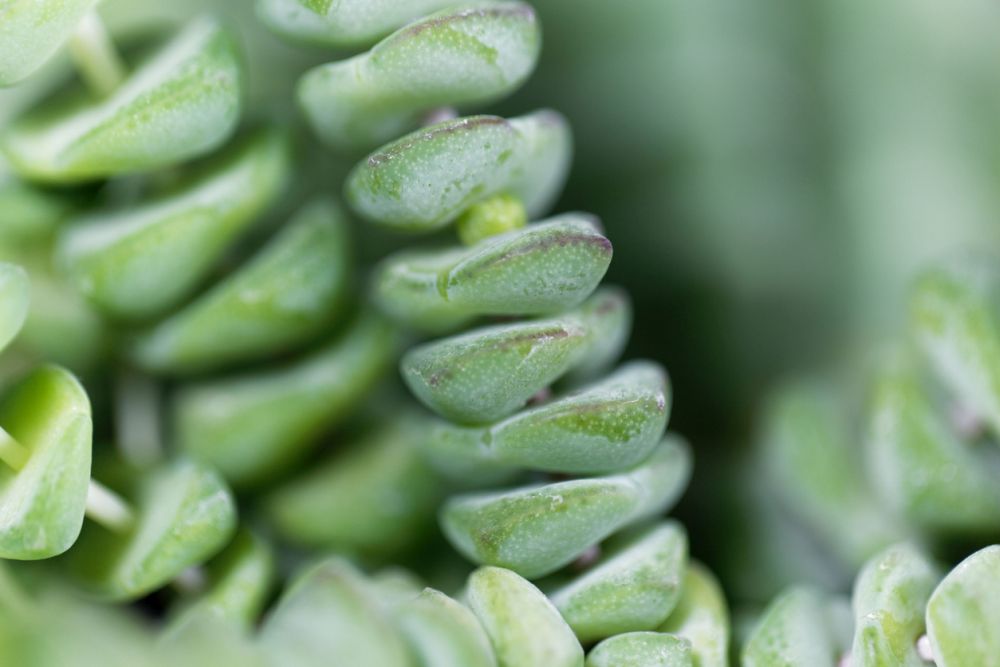 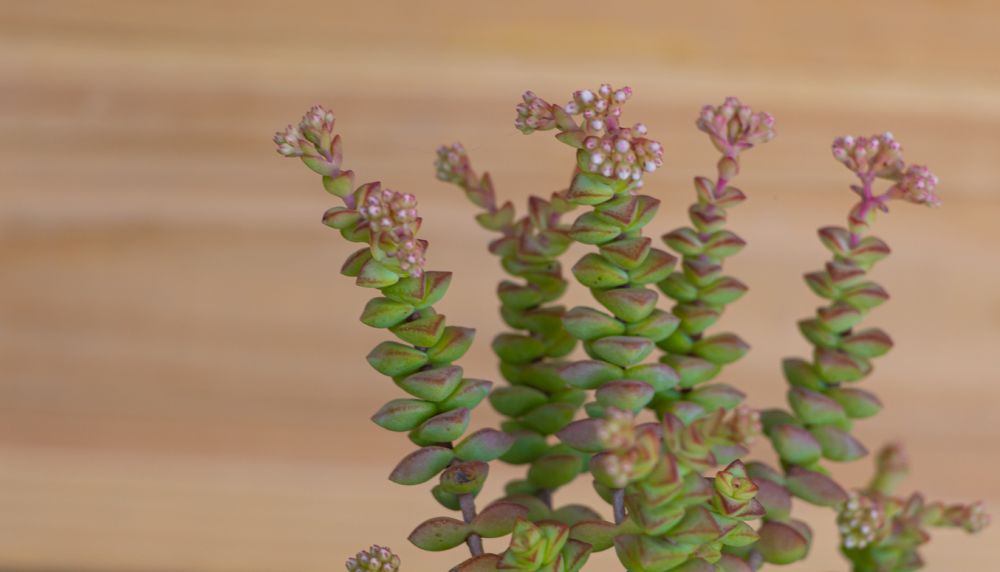 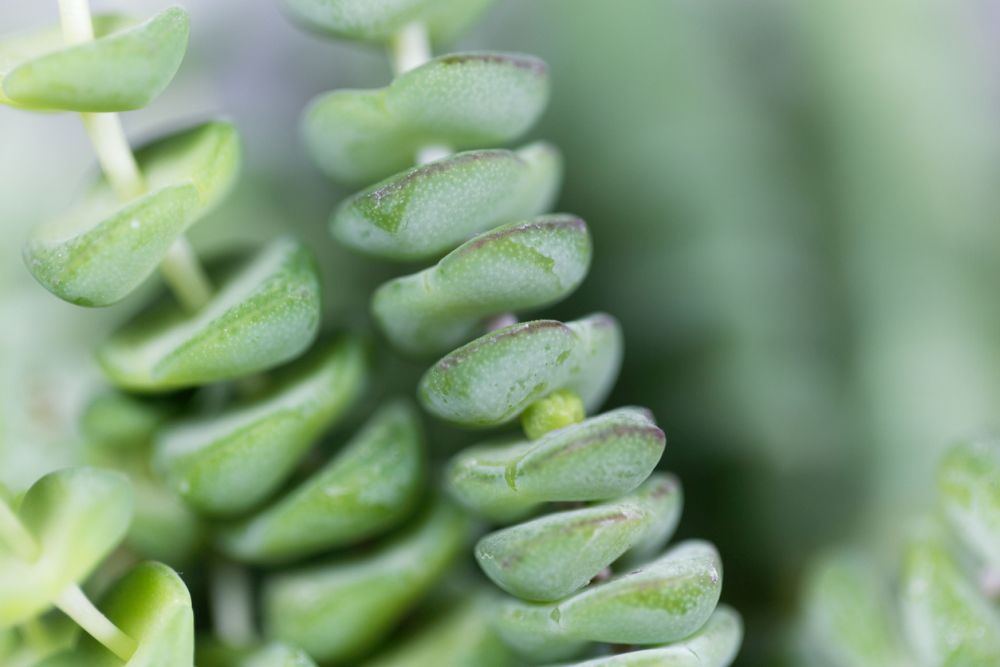 The Crassula Baby’s Necklace is a gorgeous succulent species from the Crassulaceae family with honed adaptations for an indoor setting. It’s a houseplant that stuns many gardeners for its trailing vines that hold leaves growing in a matchless pattern and resemble beads.

In this guide, we’ve rounded up the elementary caring tips you need to grasp, to make your Crassula Rupestris houseplant have an aura that’s beyond compare.

The Baby’s necklace Vine is a South African native that looks impeccable even at its worst. It’s a hardy succulent with crafty ways to beat neglect. Even after hitting maturity, the houseplant remains petite with an average height of 12’ inches. It grows upwards then spreads all over the container as it ages.

Its star-shaped leaves grow in a spiral pattern around the stems and have a rose-red tone on the edges, making the foliage own a novel stature. You’ll also find it going by these other names across many gardening stores:

The Baby’s Necklace Vine borrows its botanical name from the Latin phrase—Crassus—which means thick and fleshy. And that depicts how fluffy and stunning the foliage could get as it grows older. Apart from the average height, the leaves will grow from 1′ to 1.5′ inches tall, while the blooms could span up to 0.25” inches during the flowering season.

Apart from its thick oval-shaped leaves, this succulent plant will yield a few flowers during summer. They’re star-shaped and grow in clusters. Most will have a pale pink to white tone and die off once the blooming season is over.

During the growing season, the leaves will form varying shades with a blend of yellow and red, depending on the light conditions which we’ll look at shortly. The red and yellow tone tends to dominantly appear on the tips of the leaves.

Succulents thrive under the full sun fairly well. But for a radiant tone on the foliage, you want to place the foliage somewhere with some shade. Expose your Crassula Rupestris plant to the direct sun at a gradual pace to protect the leaves from burning. The intense heat would cause the plant to have some ugly patches that are hard to treat. And it’s no wonder why the Baby’s Necklace Vine is mostly grown indoors.

When it’s nighttime the succulent will enjoy cooler temperatures ranging from 10 to 12 degrees Celsius. During the daytime, keep the room temperature at 21 degrees Celsius. To maintain its dense growth and bright tone, keep the growing medium close to a window that lets in enough light. If it’s growing indoors, the Kebab Bush plant will need about 4-6 hours of light each day for it to blossom and look wholesome.

With a staggering preference for USDA hardiness zones 9 to 12, you want to overwinter this succulent especially if you want to see it bloom during the next growing season. While the Jade plant which happens to be in the same species prefers low humidity conditions, you can grow the Kebab Bush under slightly high moisture levels.

Other species in the Crassulaceae can tolerate modest frost conditions, but most die if the temperatures are extremely low. If your winter seasons are dark and long, you can make the best use of grow lights to help the plant with chlorophyll production. During summer, a south-facing window would suffice.

Most succulents can grow without hurdles with the commercially sold cactus mix, or the normal potting soil that’s optimized for drainage. And since they have adaptations to help them store water, any excess moisture getting stuck in the soil for too long could cause grave damage to the roots.

You, therefore, want to make sure the potting mix is permeable enough to allow excess water to pass through drainage holes right beneath the growing pot. You can purchase the commercial cactus mix, then amend it with coarse, sandy soil. Using perlite would help achieve the same results. Make sure to top-dress the soil with mulch so it can help retain some moisture.

Use a pH meter to check whether your Kebab Bush plant is growing in soil that’s preferably neutral to slightly acidic. As a miniature and slow-growing houseplant, there won’t be an alarming reason for transplanting it anytime soon after propagating it. But if there’s an intense need for that, carry out the exercise during warmer months. After transplanting, avoid leaving it in drenched soil for too long. Soggy soil causes the roots to rot.

Same as other succulents commonly grown by homeowners, the Baby’s Necklace Vine can’t tolerate the adverse effects of overwatering. Space out the watering intervals and neglect it when it’s winter since the growth hormones will go into dormancy around this season.

It’s hard for this succulent to recover from root rot. And it’s more reason why the ‘soak and dry’ method tends to be a suitable option for this houseplant. There’s technically no solid schedule for watering your Kebab Bush plant. Its watering needs depend on the temperature and surrounding humidity levels.

Check whether the first few inches of the topsoil are entirely dry before watering again to protect the roots from rotting. Your succulent houseplant would also be prone to fungal infections if it gets stuck in wet soil for longer hours. During summer you want to adhere to watering intervals of about 7-10 days, thereabout. But when winter check-in, you want to stretch the intervals out a little further, say, 10-14 days.

Common Pests & Diseases to Watch Out for

Succulents such as the Baby’s Necklace Vine are sternly prone to the effects of overwatering. Most species in the Crassulaceae family are often infested with pests such as aphids, mealybugs, and spider mites, especially when grown indoors. Synthetic-free products such as neem oil would help suppress the numbers if the infestation is massive.

For spider mites, you can rub isopropyl alcohol on the affected areas using cotton swabs. Place the growing medium somewhere far from kids and pets since the leaves of this succulent houseplant have a sticky sap with high toxicity levels. The sap from the plant could lead to skin irritation or stomach upsets when ingested.

How to Propagate the Baby’s Necklace Vine

Like most other succulents, propagating the Baby’s Necklace Vine is much easier using stem cuttings than seedlings. You can also choose to use leaf cuttings. To run the propagation exercise and get a rewarding yield, make sure to:

DIY Wine Cork Necklace – How to Make a Beautiful Necklace