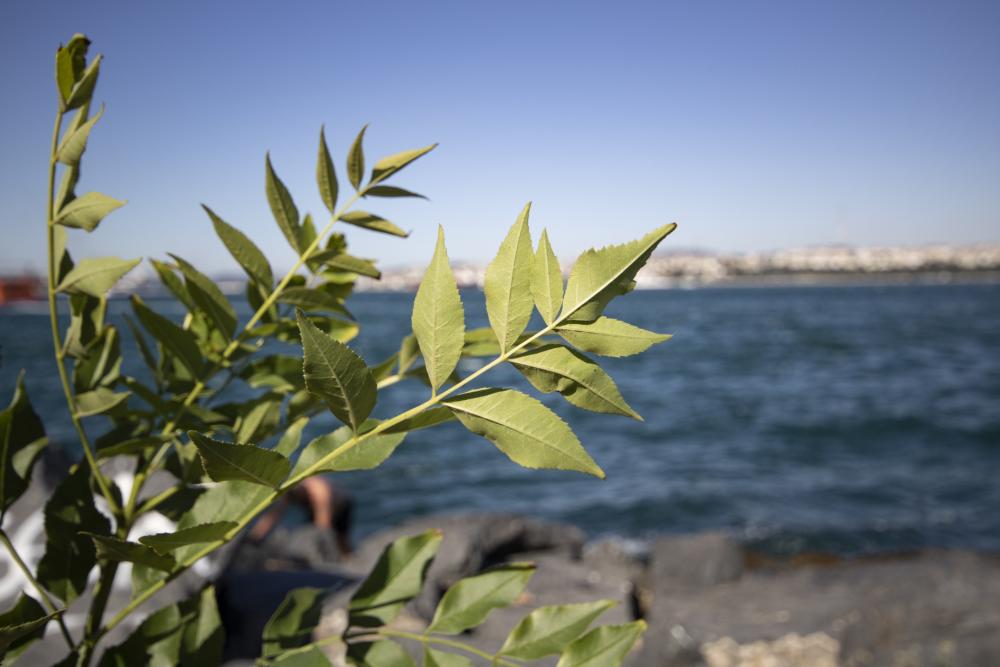 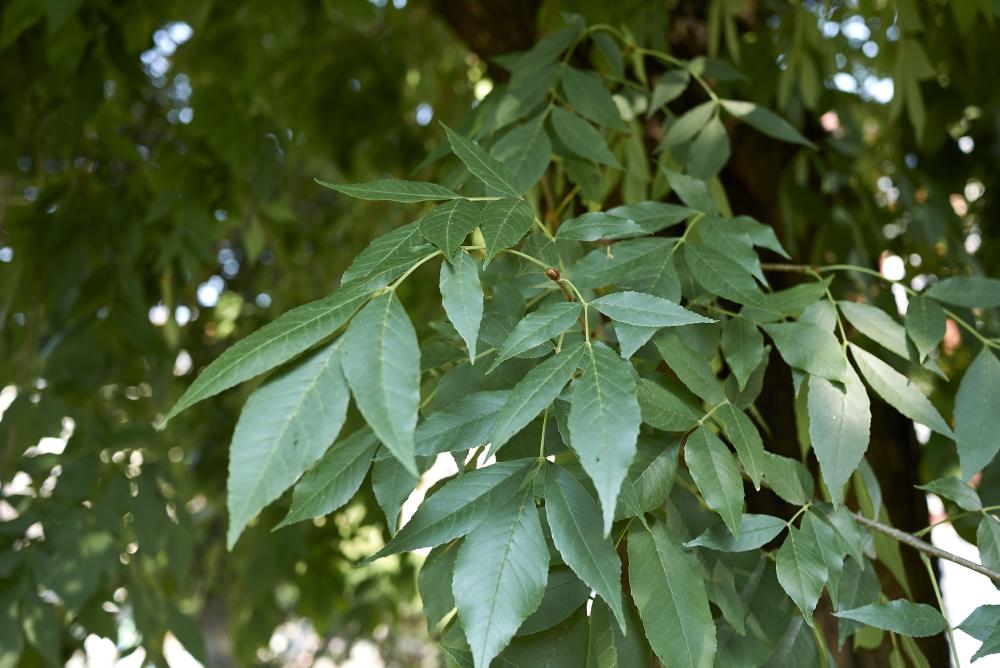 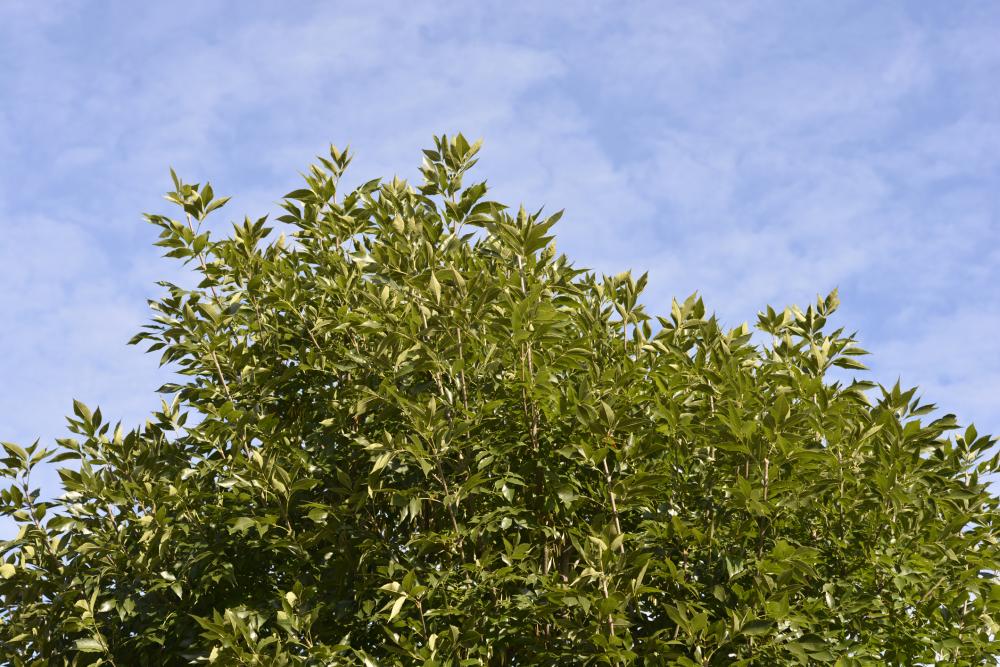 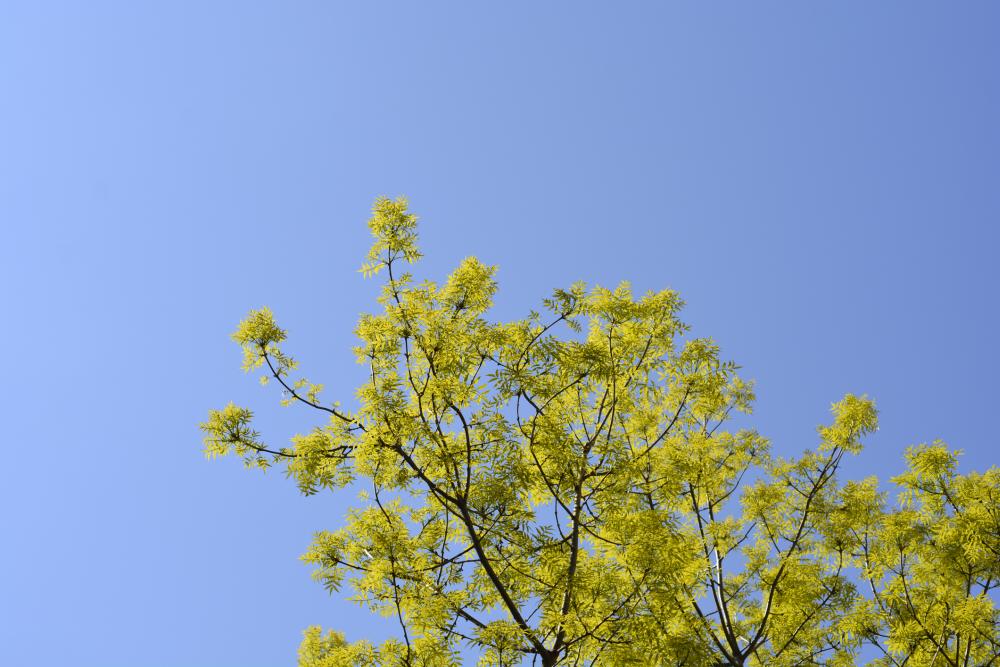 It is often said that the ash tree is as American as apple pie. There’s merit to that statement since, at some point, it was a fixture of gardens and lawns in urban and suburban America. While its popularity has dropped a notch or two, the ash tree is still a favorite of every proud new homeowner. 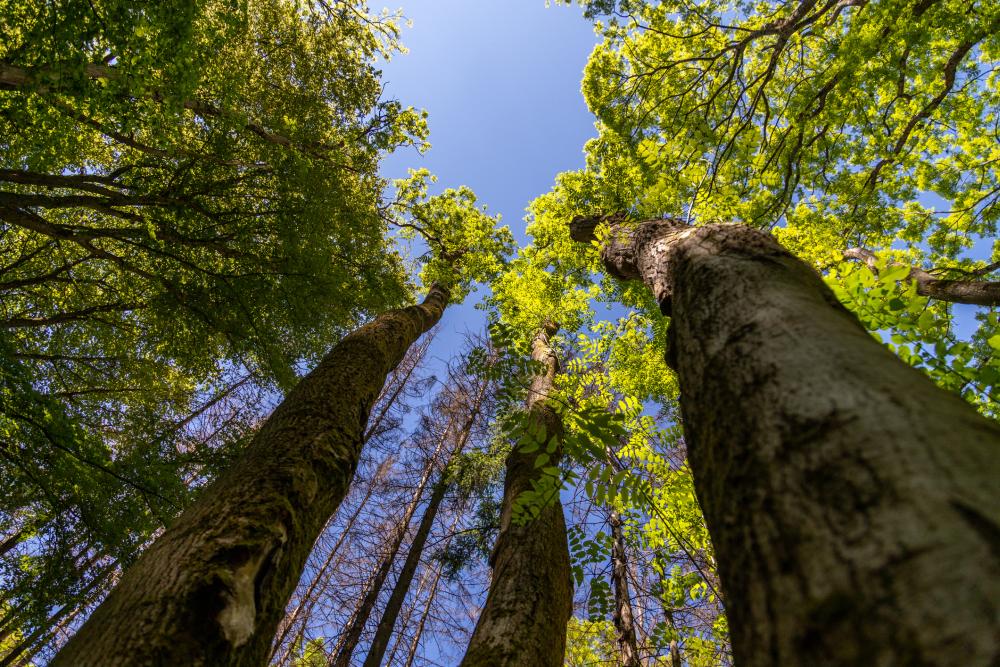 It is estimated that 65 ash species exist across the world, with 18 of them native to North America. And while the ash tree across the United States is still popular, the tree itself is in danger due to a tiny beetle called the emerald ash borer. So in a way, every new ash tree that a homeowner plant in their garden contributes to the survival of this iconic tree. Read on to know more about ash tree varieties and what makes each tree stand out.

While not as tall or prominent as other ash species, California ash has its distinctive qualities. A native of California, Arizona, and Nevada, the tree is more of a shrub growing only to about 21 feet high.

But if height is not the tree’s most distinguishing feature, it makes up for it with a unique leaf structure. The leaves usually grow in small clusters of about 7 leaves. They are light green until they turn ashen yellow and drop in the fall. The edges are often serrated and can cause quite an itch when they come in contact with the skin.

The flowers of the California ash are another attraction. They are small, white, and have two petals each. This is why this ash is sometimes called the two-petal ash. They have a delicate fragrance that spreads in cool summer evenings.

The California ash requires little maintenance and care once you get it started. It’s best suited for zones 7 and 9 and thrives in warm, dry weather. You’ll need to plant it in a spot that gets the full sun. As for water requirements, the tree has a high tolerance for drought, so if you get moderate rainfall every year, that should be enough for the established ash.

The main pest that affects the California ash is the emerald ash borer.

A true American ash, the white ash can be found growing all over North America from Nova Scotia up north all the way down to Texas and Florida. There have been successful attempts to grow it in Hawaii as well.

Along with green ash, white ash is the most prevalent ash species in America. In fact, it’s hard to distinguish the two ash species from each other, considering how similar they are. The leaves, for example, are so much similar in size and shape the only way to tell them apart is to look at the underside of the leaf.

White ash leaves have two-shade leaf undersides. Near the node, the leaf is dark green, and it blends into lighter shades of green toward the tip. Another tell-tale sign is the tips of the shoots. They’re usually flaky compared to the smoother stems of the green ash.

The green leaves of the white ash get a dramatic change of color in the fall. They turn into fiery orange and red, and the clusters of seven leaflets put on a good show. Eventually, the leaves will drop in the late fall, and the tree goes dormant until the spring.

The white ash is suitable for most hardiness zones, but they especially prosper in zones 3 to 9. It’s a tall tree towering over 80 feet high and requires full sun. Like many other ash types, the emerald ash borer is its mortal enemy.

Another large ash that grows to about 60 feet, although in the right conditions, it could reach 75 feet easily. The black ash is also deciduous, and it sheds its lush canopy in the fall. But it’s the bark that gives it that name. The black ash has a scraggy gray or black bark even at a young age. Even the buds that emerge in the winter start out as black before turning into light green.

Its natural habitat centers mostly around the northeastern parts of the US and eastern Canada. However, recent infestations of the emerald ash borer have almost threatened the very existence of this once ubiquitous tree.

With a thick trunk measuring about 24 inches in diameter, the black ash needs plenty of space to grow and flourish. And unlike many other ashes, this one produces its flowers before its leaves. The small flowers have no petals and add no ornamental value to the tree. Before you even notice them, they get pollinated by the wind and disappear.

The leaves, on the other hand, put on a more impressive show. The bright green leaves grow in clusters of 4 to 7 leaflets. The long leaf is about 8 inches long, although sometimes it will grow to about 18 inches. It has a toothy edge, although it poses no risk when it comes in contact with the skin.

In the fall, the leaves become matted yellow before falling. And although the tree has its distinctive ornamental and shade values, its susceptibility to pests makes it unsuitable for many urban areas.

As the name implies, this ash is native to Europe. It grows from Britain to the west and covers the whole of the continent, with some clusters even found as far north as Norway. The European ash has also found a home in parts of the USA, Canada, and even New Zealand.

Averaging between 40 to 58 feet tall, this ash is ideal for medium to large gardens and lawns. It has a slender trunk that grows to about 6 feet in diameter with smooth and gray bark. Older trees have scarred bark which turns increasingly dark as the ash ages.

The leaves grow in clusters, as is the case with many other ash species. Each leaf is about 13 inches long and has an elliptic shape. You should be careful touching the foliage as the leaves have sharp and serrated edges.

It’s also foliage that doesn’t stay long on the tree. As one of the latest to grow leaves in this family, the European ash is also one of the first to shed those leaves. So it’s fair to say that the tree displays its bare branches for the best part of a half year.

Another distinct feature of this ash is how one tree can produce male flowers one year but female flowers the next. The flowers are usually dark without petals and are gone before anyone can notice them.

Probably the only advantage the European ash has over more ornate ash species is that it doesn’t fall prey as easily to the emerald ash borer.

The blue ash grows mainly in the midwest and is a medium-sized tree. As with other ash species, it’s also deciduous and sheds its beautiful foliage in the fall. But this ash has some really intriguing features that set it apart from other members of the family. For one thing, its twigs have a squarish appearance because they have four ridges (quadrangulata means four angles).

This ash also produces its flowers before the leaves. In the early spring, small, purple leaves emerge on the bare branches. After being pollinated by the wind, they are replaced by small fruits about two and a half inches long. The samara fruits are not edible, and apart from the wings, they only have seeds.

The leaves of the blue ash are pretty much similar to other ash species. They grow in clusters of 5 to 7 leaflets, and each slender leaf is about 5 inches long and one inch across. The leaf edges are deeply serrated.

Apart from its fine timber, the blue ash also provided early settlers with dye from its dark bark. It has a higher resistance to the emerald ash borer than other ashes, so it’s a good candidate for gardens as a shade tree. It grows well in zones 5 to 7 and favors the full sun.

Besides white ash, green ash is probably the most widely seen ash just about anywhere you go. Even if you have never left the boundaries of the city, the green ash is still a permanent fixture in many urban settings. It grows naturally along the east coast of North American, covering a large landscape from Florida in the south to Nova Scotia in the north.

Green ash is known by many other names, including red ash, swamp ash, downy ash, and water ash. It grows to about 80 feet on average, although it can reach 140 feet in the right conditions. The bark of the young tree is usually gray and smooth, but with age, it cracks up and becomes less appealing.

One of the reasons it’s called red ash is the red buds that emerge in the late winter. Many ash species with a color in their names are named after the color of those buds. As for the foliage, it’s lush green during the spring and summer but turns yellow in September before the leaves fall.

The leaf of the green ash is about 12 inches long and 3 inches wide. The edges are serrated and sharp. It’s a good ornamental and shade tree except for its vulnerability to the emerald ash borer beetle. It grows well in zones 3 to 8.

Native to North America, the pumpkin ash has rather large fruits and a swollen trunk which gives it this unique name. In general, it’s a medium-sized ash, but in the right environment, it can reach 150 feet tall with a sizable trunk that grows to 15 feet in diameter.

The bark is usually gray and smooth on young trees but quickly acquires a diamond pattern of fissures as the tree ages. In the winter, small buds emerge on the branches with a dark color. They are smooth and velvety to the touch. But once the spring arrives, the tree makes a splash with tiny purple flowers that appear a few weeks before the first leaves.

Old pumpkin ash trees have a rather unpleasant feature. Their bark thickens, becoming deeply fissured, before developing into ridges. In most landscapes, that’s not the ideal look you’d expect out of your tree. Another drawback is, of course, the emerald ash borer. The beetle has threatened the species across the whole of North America.

Apart from that, the pumpkin tree is easy to grow in many landscapes in zones 4 to 9 and favors the full sun.

Ash Tree Growing Problems and How to Fix Them