Anything unpleasant in your garden is something worth eliminating, don’t you think so? Naturally, a weed can find most places quite habitable. And if your sidewalks have cracks, there are chances you’ll have to deal with weeds. Call it ‘a plant in the wrong place’. Weeds will grow in human-controlled settings, such as gardens, patios, lawns, parks, and sidewalks. Even when the outdoor conditions are scorching and unfavorable, it’s still possible for weeds to creep in. Even worse, due to their genetic prowess, getting rid of weeds entirely can be a labor-intensive task. 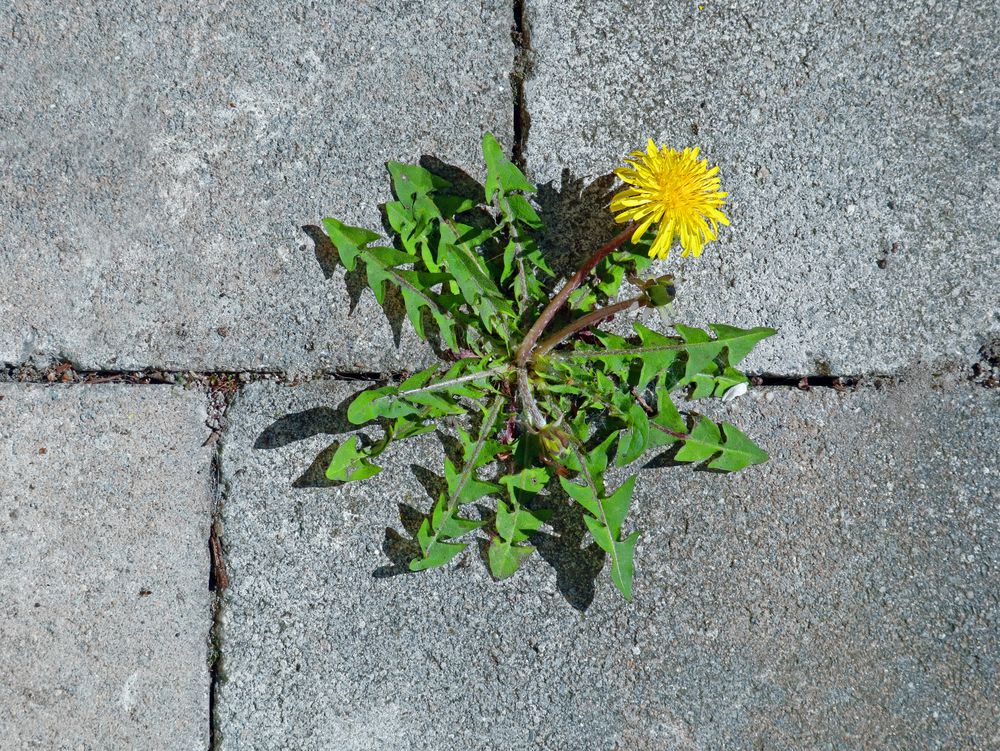 These unwanted plants tend to grow more in the tiny spaces left in pavement cracks that develop due to hot and dry climates, leaving the question if they could survive in these small, narrow fissures. The truth is that these weeds survive and seem to thrive so well in these hot pavement cracks. Despite their tendency to grow and survive in these cracks, they could reduce the appearance of these pavements and potentially cause damage to the entire floor forcing them to be eliminated.

Pavement cracks and sidewalks seem to attract weeds in some type of way since they contain a good amount of soil and organic matter that is suitable for weed growth. A Lot of moisture is also trapped beneath the cracks enabling any plant that has roots to grow and survive there.

Ideally, weeds that grow and thrive in pavement cracks do so because they are genetically well adapted to the conditions created by the material used in paving. Thanks to some preventative measures, weeds can be avoided through the practice of feasible strategies that need a strict routine. Read on to find which could work for you best.

When to Kill Weeds on Pavements

If you want to get rid of weeds completely, it’s best to come up with a pattern that will help suppress them continually. Coming up with a weekly routine for weed control and plucking has seen it work for most homeowners who want their landscape looking neat and weed-free.

For some strange reason, weeds know how to create a symbiosis relationship with the environment as they can keep up with genetic recombination to spread further even when preventive measures are put in place. You will notice that weeds tend to begin their life cycle in summer, germinating throughout winter and actively growing in spring.

Ideally, the best time to kill weeds is after heavy rains or when the soil is damp as this makes it easier to lift the weeds up and out of the soil by the root. It is still possible to eliminate these weeds even during the hot seasons of summer by using chemical herbicides. These chemical herbicides are effective and selective, and this makes them less harmful to the environment when they are used properly.

While prevention is one of the ways to control weeds, do not stress If weeds are already present as corrective measures can be used to eliminate the weeds and restore the look of your pavement, walkway, sidewalk, or patio. Here are several effective strategies for removing weeds between pavers;

Weeds need to take root for them to sprout and most times they do not sprout from beneath the pavers. You want to inspect any sidewalk cracks for any early signs of weeds sprouting. They sprout out of seeds that fall and settle between the cracks of the pavements on the surface. Sweeping your pavement surfaces regularly will help remove surface dirt and also disrupt any seeds before they commence rooting, helping to distort any weed growth. Prevention has to be the most effective strategy and as much it is not 100% guaranteed to work, then there are several other methods to use for weed control. 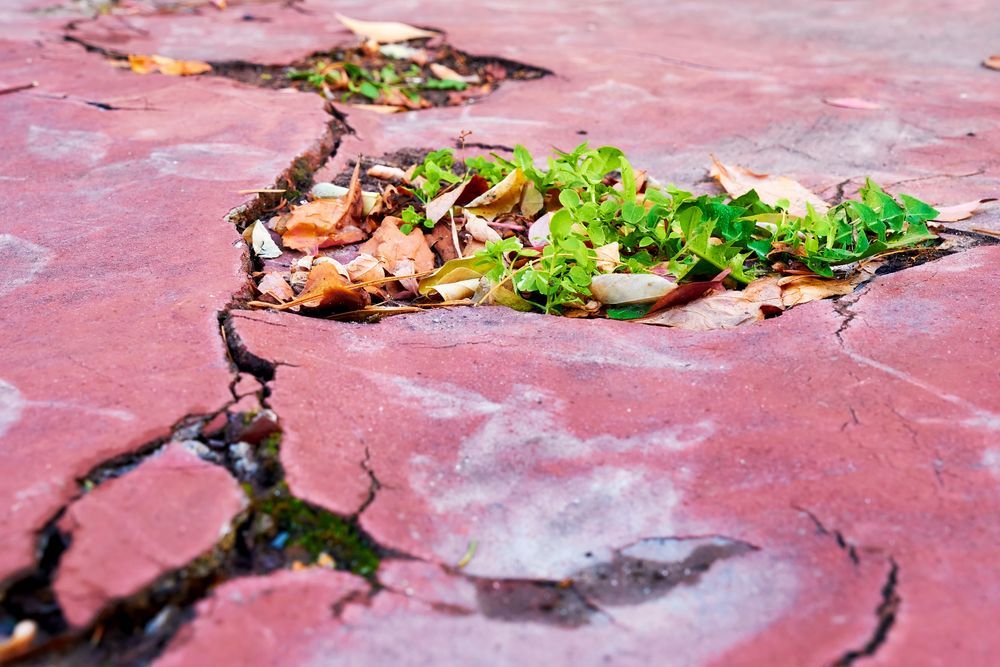 It is one of the most tedious yet effective methods that require a lot of effort and time for the entire plant to be uprooted and for the plant not to resprout again. Again, it is best effective when the soil is damp just after it has rained or you could consider sprinkling some water into the pavement cracks just before uprooting it.

Moist or damp soil softens the root and makes it easy to pull weeds while in dry soil, they often get stuck and the roots remain in the soil to grow again. However, the weeds may keep on reappearing over and over until pavers are completely sealed using crack seals. Sealing and having your pavements properly installed will not leave room for weed growth.

This is a cheap, natural, and easy method to use for your weed control and removal between pavement cracks. Even though some weeds like to thrive in hot conditions, they will survive hot and steaming water. You could also try and add salt into the hot water as salt is believed to kill most weeds. After several attempts of this hot water practice, weeds give up and stop resurfacing. The only thing you have to avoid is using water with leftover foods or oils.

Using vinegar will kill the weeds without damaging the pavements as compared to other chemicals. The type of vinegar used in cooking is low in acetic acid (around 5 percent) therefore it is not the best to use. You will be required to buy a horticultural vinegar that has a higher acetic acid content (20 percent to 30 percent) which can be ordered online as it is not locally available. Acetic acid tends to destroy cell membranes and plant tissues, resulting in plant death.

It is recommended to use gloves for your hands while handling these acidic chemicals as they could irritate your skin. Vinegar is an effective remedy against weed seedlings that are in their early sprouting stage. After mixing the concussion, it should give you results. However, if it’s not proving to be effective, then you’re probably doing it wrong.

Some pro-gardeners suggest that it’s best to use the solution during warm or sunny days since it works better in this kind of environment. The downside of using vinegar is there are risks involved. Vinegar isn’t organic, or if you like, a natural weed killer. It contains corrosive chemical compounds like acetic acid. For this reason, you want to wear protective gear when using the concussion to avoid any contact with your skin. Even though it’s obvious you want to see rapid results, don’t be tempted to increase the concentration as it can cause chemical burns.

5. Use a pressure washer

Using this method will not only kill the weeds but give a deep cleaning on your pavements. This leaves your space looking spotlessly clean. Be careful to use the right nozzle for this so that you don’t damage your pavement. A jet nozzle is not the best as it will wash away the sand out between and under the pavers. It is, therefore, best to use a rotating surface cleaner as it will remove the weeds and wash your pavements at the same time.

Use a weed torch only if the weeds have not grown to structures or plants that are flammable. It is an expensive method to use as the torch is quite costly compared to other weed control methods discussed here. Many weeds cannot tolerate the heat of 2000 degrees produced by a weed torch.

This is an alternative method to handpicking the weeds. Some tools are designed and shaped to fit in narrow spaces, making it easy to remove weeds between pavement cracks. These tools make weeding easier and do not allow space for regrowth. These tools are mostly L-shaped blades that allow cutting from different directions, removing the weed at the base of the stem. 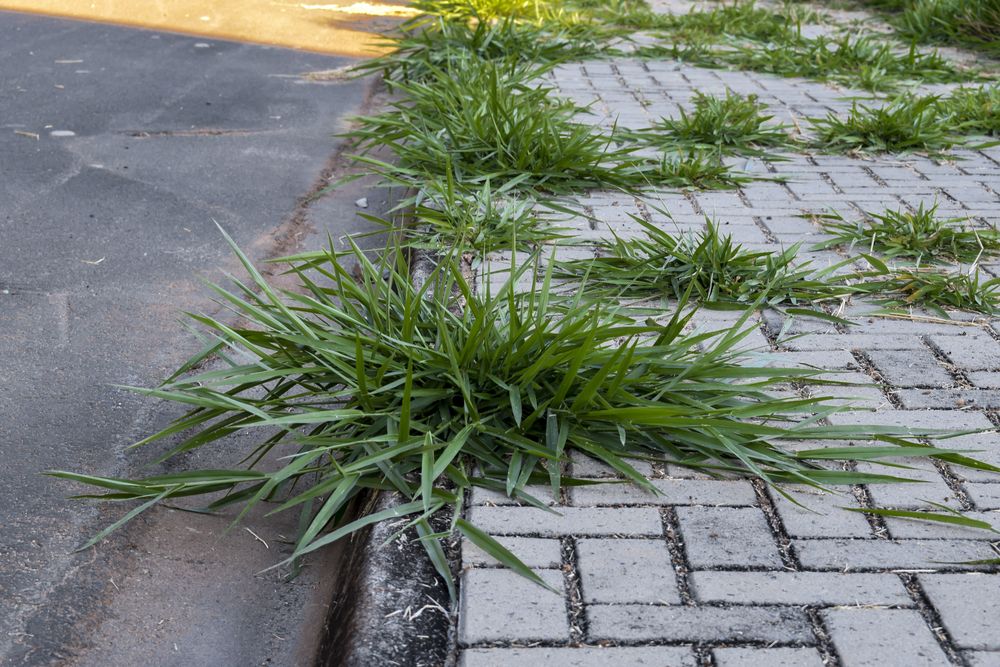 Salt is good for weed killing and prevention. What you do is sprinkle it along the pavement cracks or areas with weeds to kill the existing ones and to also control the future growth of these unwanted plants. Just like baking soda, do not use this salt method while it is raining as it will be carried away by the rain rendering it ineffective. Using salt is not 100% safe, especially when not regularly applied.

Resort to using this method if other methods are not effective since when they are not used properly, they could be unsafe to the environment. It’s important to shop for chemical herbicides that kill the weed and the root at the same time. An example of a herbicide that eliminates both the weed and root is Roundup and the best news is that it is not harmful to the environment.

How to Prevent Weeds Between Pavers 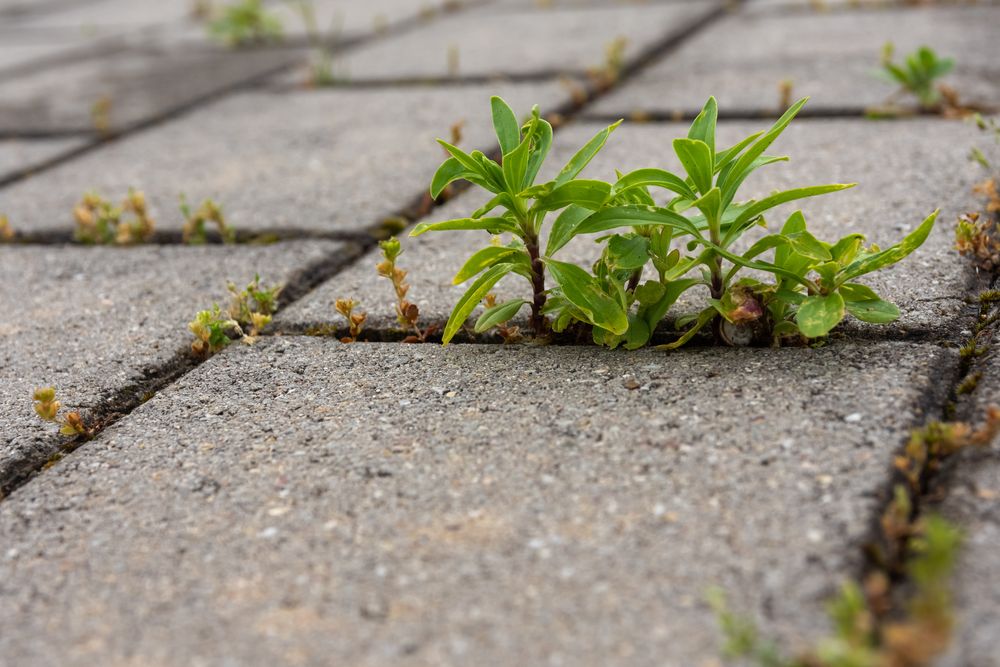 Even with weed removal techniques, you will find stubborn perennial weeds with strong roots resurfacing. It is therefore important to come up with a weekly routine for weed control. A single weed-removal method may not be 100% effective. It may be more effective to combine two or more of these strategies, depending on how severe the weed problem is. Once the problem has been rectified, go back to the prevention methods to keep them away.

The best way to prevent weed growth is to have your pavements sealed and properly installed professionally as discussed above. Interestingly, you will still find some weeds sprouting because of the seeds that can get into the pavement cracks, that is why it is important to practice regular sweeping.

Fill your pavers with polymeric sand. Polymeric sand is a material used to fill paver joints, which is made up of fine grains that helps replace sand that may have been washed, blown, or swept away over time. It also keeps dirt and seeds from finding their way into the cracks in the future.

Homeowners should consider using professional sealing services as they can provide the best services and they help choose the right sand and sealers for your pavement cracks. Professionals will also use the right processes of cleaning, sanding, and sealing to avoid issues of underutilization and overutilization of quantities used for this process. 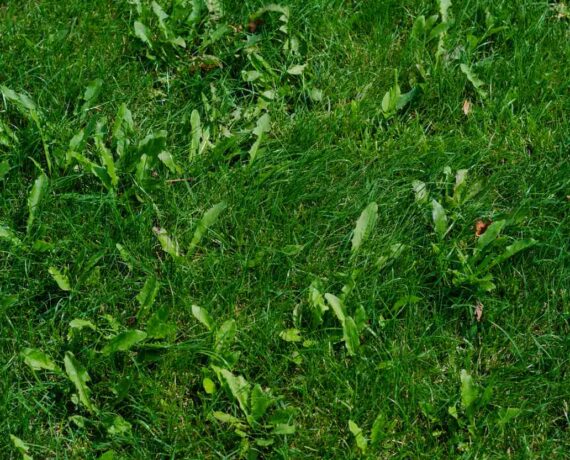 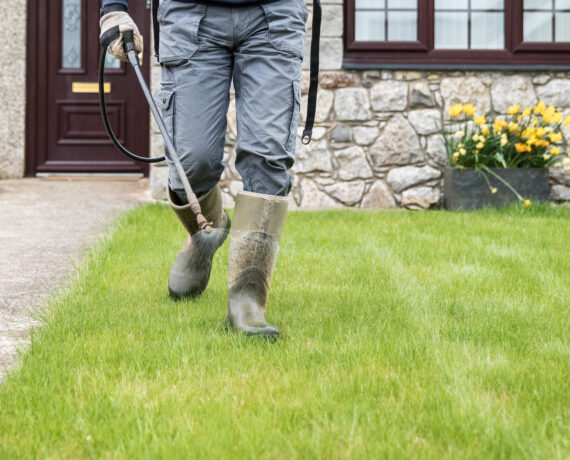 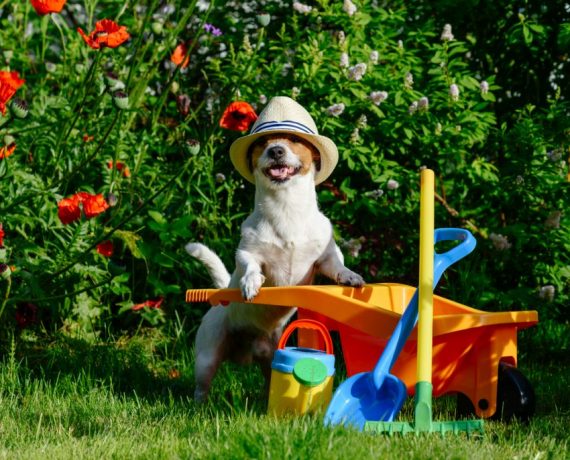 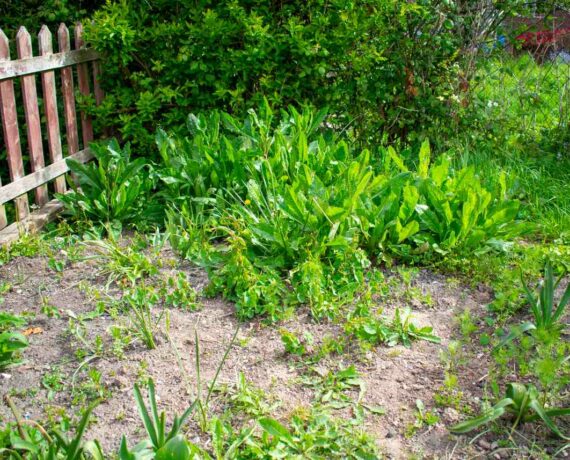