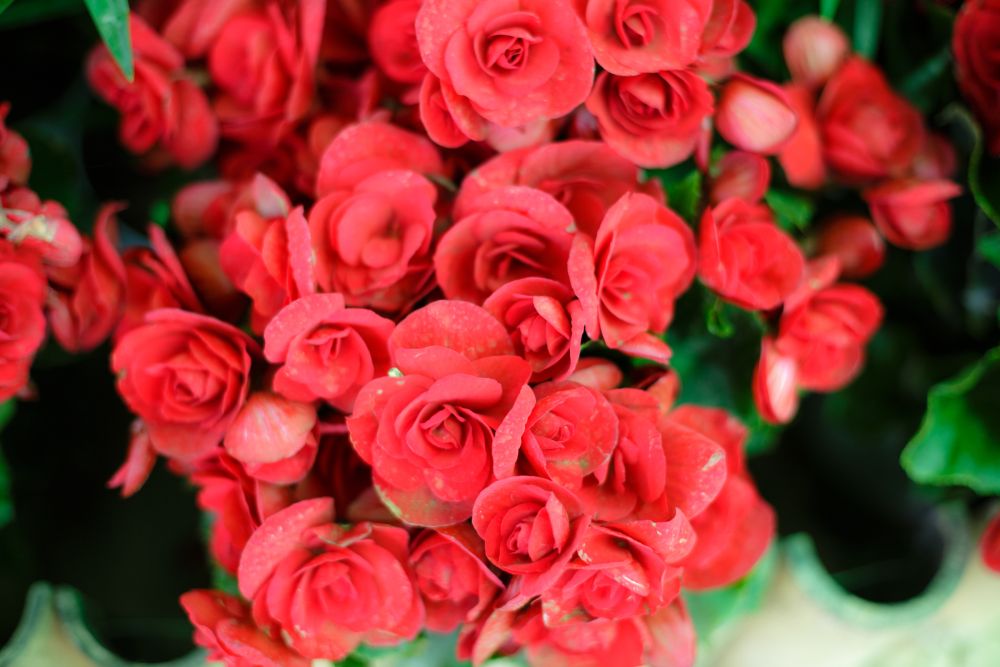 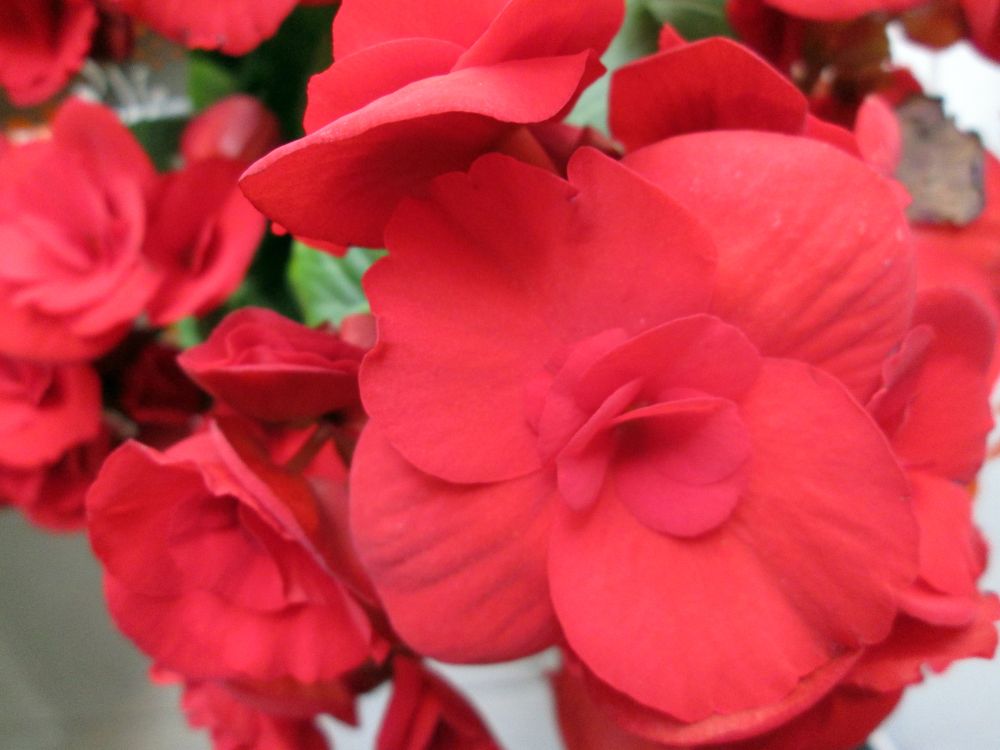 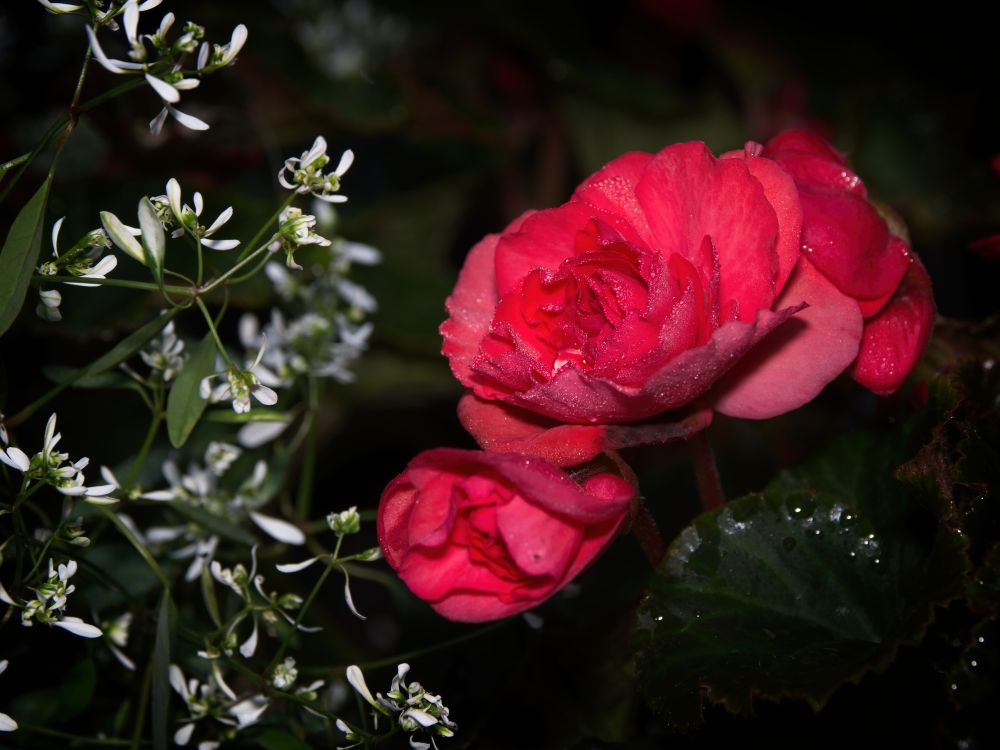 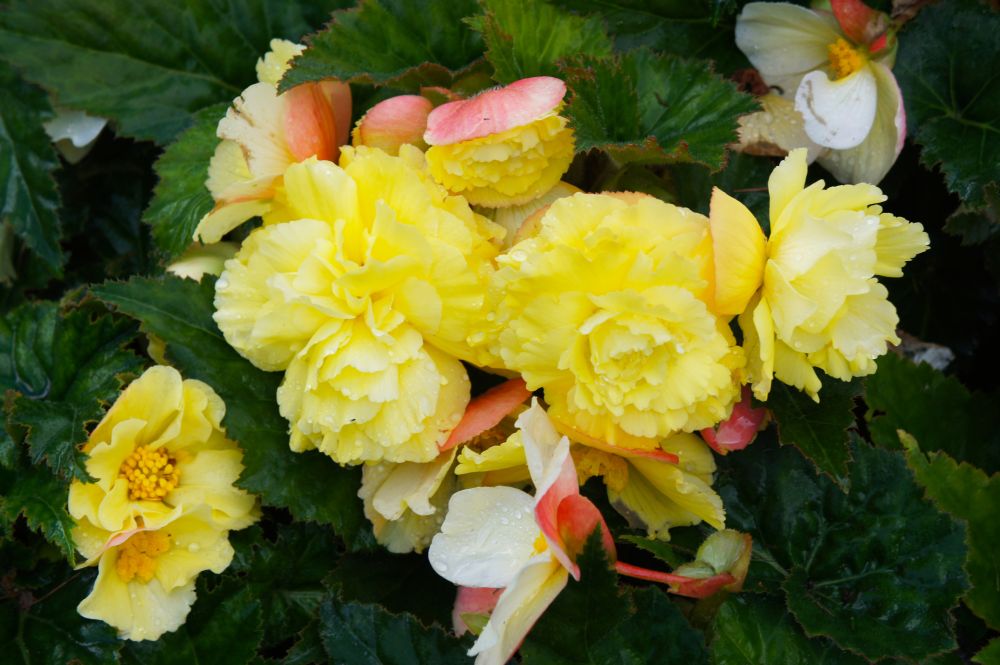 Growing flowering and frost-tender plants such as tuberous begonias can ostensibly seem like an intimidating task. However, nothing would be daunting if you’re matching up with the necessary growing conditions. 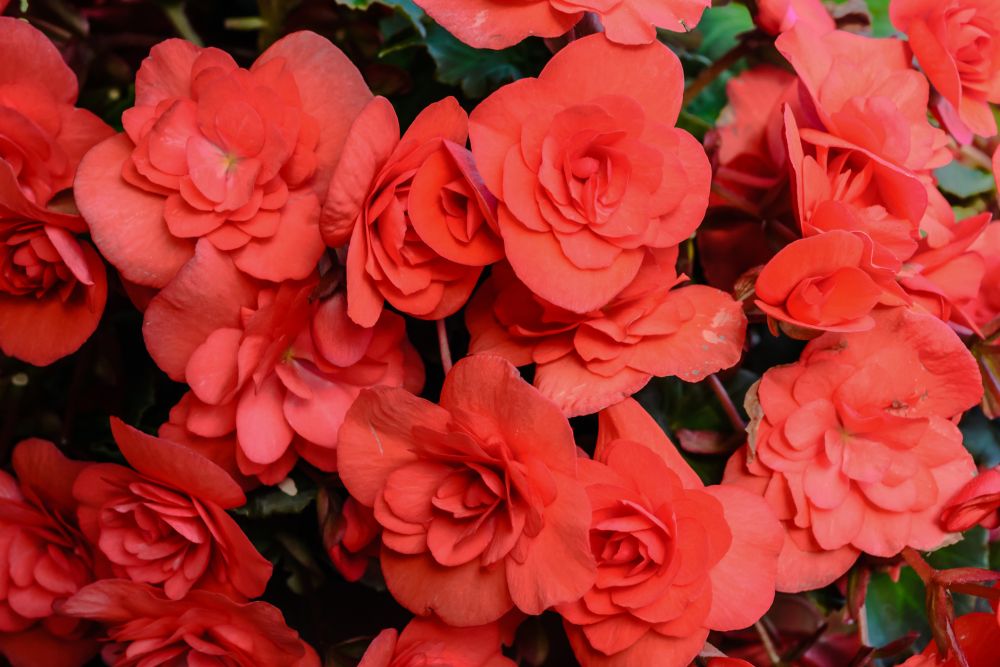 Well, these gorgeous perennials come from the Begoniaceae family and are known to produce vibrant and showy flowers. The blooms create an inviting aesthetic when growing inside hanging baskets. So, let’s get started with the basics so you can get the hang of growing and caring for these flowering perennials.

There are a handful of tuberous begonia varieties commonly grown for their sumptuous and imposing blooms. In most gardening stores, you’ll likely come across types such as the ‘Nonstop Deep Rose,’ ‘Mocca White,’ ‘Go-Go Yellow,’ and the ‘Solenia Cherry’ tuberous begonia. All of these varieties produce bright and vibrant flowers during the blooming season. Tuberous Begonia plants are not difficult to grow. In the wild, you’ll find them in shady but humid forests, often clinging to the limbs of trees. The plants grow from tubers and produce clusters of double blossoms on the stalks and in many colors – white, pink, red, lavender, and more. On average, the flowers spread about 4′ inches wide, and it’s no wonder why most growers use this tuberous perennial as a bedding plant.

How to Grow Begonia Tubers Inside Containers

Growing tuberous begonias indoors inside containers is a safe bet, especially when the outdoor conditions are favorable. For a picturesque display, use hanging baskets that are at least 12′ inches wide. The tubers need to be covered by 1 cm of soil. Be sure to give them plenty of sunlight even when growing indoors, and don’t let the soil dry out completely during warmer months since begonias enjoy humid conditions. Use these tips when planting them inside containers:

How to Plant the Tubers Outdoors

Your tuberous begonia will have a prepossessing stature while growing outdoors. But it would be needful to sync with the exact conditions this perennial needs to thrive in an outdoor environment. So, here are the easy steps you want to work with:

As you probably know, begonia is a genus of flowering perennials. The blooms on tuberous begonias usually grow in various shades such as pink, white, red, and yellow. To ensure blooming takes place in time, you need to plant the bulbs indoors during the early weeks of spring. There are Begonia types with picotee flowers that have varying colors on the petal edges. One of the most captivating traits about tuberous begonias is the bloom even when growing under the shade.

Earlier, we explained that tuberous begonias are native to the Andes Mountains, where the altitude is relatively high. Its indigenous environment has high humidity, and the nights are a bit chilly. You, therefore, want to mimic the conditions when growing them both indoors and outdoors. Tuberous begonias are prone to arid and scorching environments. Sadly, Begonias don’t tolerate cold weather, and they’ll die when left outside during the winter season. Right from the start, the bulbs will need warmth quite constantly. They also need enough bright light once the sprouts begin to emerge.

When growing inside pots, it’s much easier to move your Begonias indoors anytime the temperatures fall below 50 degrees Fahrenheit. Buds of most Begonia varieties will begin to drop once hit by freezing weather. Grow your tuberous begonias somewhere with filtered light or where they can receive morning light at most. Avoid placing the growing medium in a low-light location since the plant will need sunlight to bloom. During the day, most flowering perennials prefer a temperature range of between 55 to 60 degrees Fahrenheit. You also want to grow this flowering perennial far from strong winds.

Before planting your tuberous begonias, you want to ensure the soil texture is light and porous enough to let out any excess moisture. The tubers, too, need ample air circulation. Use ordinary gravel soil, then mix it with sand to improve drainage. Also, consider amending the potting mixture with one part of peat moss. When planting the tubers, place them in individual clay pots. Containers made of clay will allow water and moisture to penetrate through since they’re porous, compared to plastic pots.

For optimal root growth, you want to add a portion of bonemeal. It also helps keep your tuberous begonias from stunted growth. Consider placing pebble rocks on the bottom part of the growing pot to improve drainage. In a nutshell, you want to use a potting mix that’s ideal for bulbs and check whether it’s humus-rich. Before transplanting the bulbs into individual containers, it’s best to wait till two or more leaves have emerged. To avoid any possibility of transplant shock, grow them outdoors after the frost period is over.

When watering, it’s necessary to keep the entire foliage dry. The effects of overwatering include powdery mildew that deteriorates the foliage quality alongside many hard-to-treat bacterial diseases. Keep the soil moist regularly, especially during the warmer months, but avoid overwatering because it could lead to root rot. Using drip irrigation or self-watering planters would be much safer, and both options carry better chances of yielding pleasing results.

During fall and winter, it’s typical for the tuberous begonia to go into dormancy. So, reduce the watering intervals drastically when the temperatures are at their lowest. Apart from rot, too much moisture during this period will attract pests. When using a commercial potting mix, it’s vital to read the instructions on the soil label you’re using and maintain the recommended irrigation schedule.

Using humus-rich soil together with other organic options would be an effective way to feed your tuberous begonias. They don’t need to be fed with synthetic fertilizers to look vibrant and colorful. But, on the other hand, your begonias will likely make the most out of the nutrients. Feeding during the early weeks of spring when new growth is about to emerge is, therefore, a solid idea. Some of the organic suggestions to get you started include fish emulsion, compost tea, and liquid seaweed. If you’re a beginner, then you may not have thought of compost as an option for herbaceous plants such as begonias.

However, you need to know how it works for growing healthier plants. Additionally, your begonia houseplants can benefit from it in many ways to make them grow to be more colorful and robust. The fertilizing standards are pretty much the same as those of most other flowering perennials. So, a significant phosphorus ratio would be needful since your begonias desperately need it during the blooming season. However, it needs not to be in a higher composition than other essential nutrients. For example, you can work with a balanced and soluble fertilizer in the ratio of 10-10-10. Also, you want to use the fertilizer at half its strength.

How to Propagate Tuberous Begonias

Before we even get started with the ins and outs of propagating this flowering perennial, it’s crystal clear but worth mentioning that all tuberous begonias lack a fibrous root system. Instead, they grow in bulbous forms, usually referred to as tubers. The tubers are harvested from the ground during the dormancy period. Once uprooted and split from the parent plant, they’re stored indoors in a dark and cool place, then replanted in the early weeks of spring when the hormones are about to regain their vigor.

Besides the division method, you can propagate your tuberous begonias using leaf cuttings. After few months of receiving favorable growing conditions, the leaf cuttings usually develop new tubers. Therefore, it’s best to dissect the tubers during the summer season since the chances of transplant shock around this period are possibly slim. Here are some of the steps you need to work with when propagating your tuberous begonia using tubers:

Overwatering tuberous begonias is necessary since they’re prone to frost conditions, primarily when growing outdoors. So, they need to stay indoors until the frost period is over. And it’s relatively easy to save them for the following summer.

On many occasions, many problems that tuberous begonias end up experiencing are escalated by poor growing conditions. When this flowering perennial grows under a shady, crowded, or damp location, the foliage is more likely to struggle with powdery mildew. The underside of the leaves might have some greasy spots. Excess moisture getting stuck in the soil also attracts harmful pathogens suck as bacterial leaf spots and blight. It’s best to space the tubers at least 12′ inches apart when planting to leave room for air circulation. You also want to avoid overhead watering. When pruning, get rid of affected leaves and don’t propagate using leaves that look wilted or infected with diseases.

If there are fungi in the soil, your tuberous begonias will die due to stem and root rot. A dreadful fungal infection such as Pythium root rot crops up due to poor drainage conditions in the soil. Some of the pests that find this flowering perennial pretty much habitable include thrips, mealybugs, and aphids. Unfortunately, it’s easy to overlook the potential damage these bugs could cause. Thrips, for instance, are notorious for transmitting the tomato spotted wilt virus. Over time, the virus causes the blooms to have a poor yield. Your begonias might also experience stunted growth. To control thrips, get rid of any weeds growing on the edges of the container and garden soil, or make the best use of insecticidal soaps.

Rieger Begonia: How to Grow & Care for the Elatior Begonia Plant

Cassava Plant – How to Grow And Harvest Cassava