In our house, pretty much all of the room shave been redone in recent years with the exception of our smallest bathroom. Since it’s a place in the house that guests don’t often see, it wasn’t a huge priority in the grand scheme of our house, but now that we’re happy with the other rooms, it’s time that our little bathroom got some TLC as well! We’ve already got a plan for the larger aspects of the makeover project, but we’ve been spending a lot of time scrolling through DIY tutorials and crafting ideas on the Internet that might work well for giving our small bathroom space a bit of character. 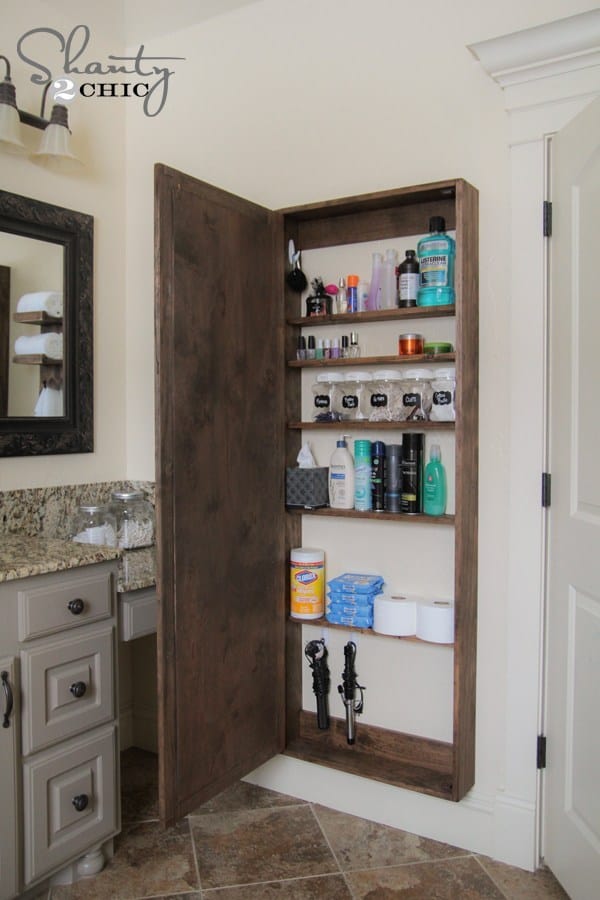 Perhaps you’ve got rather limited wall space to work with in the bathroom in question but you’re determined to somehow incorporate both more mirror space and more storage space into the room, since you really could use more of each? In that case, we’d absolutely suggest taking a look at how Shanty 2 Chic made this full length mirror cabinet that has some awesome shelving all up the wall when it swings open. 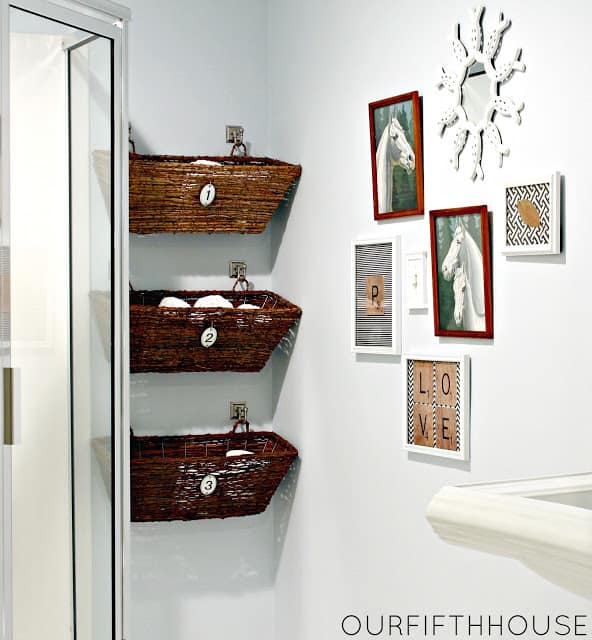 Wall mounted storage is a heaven sent thing when it comes to small rooms because it gives you a place to put things without taking up what limited floor space is available. Personally, we’ve always preferred baskets to shelves because things are less likely to fall, which is probably why we were such big fans of the way Our Fifth House used window boxes as wall mounted storage, fitting them into a smaller spot where classic shelves probably wouldn’t fit. 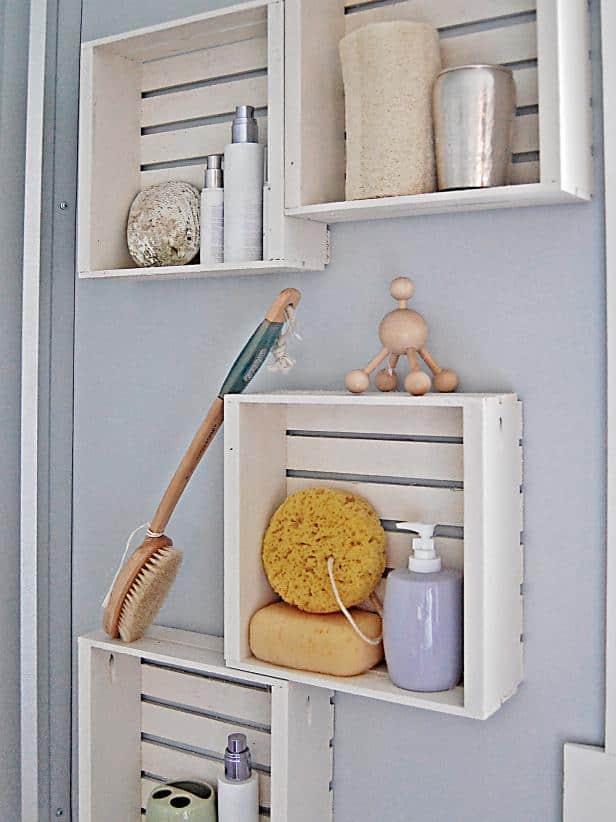 Did we really catch your attention with the idea of putting in alternative wall mounted storage because your little bathroom does have limited floor space for shelving but you’re also hoping to build a slightly more rustic chic aesthetic in there than what you’ve seen so far looks like? In that case, we’d absolutely suggest taking a look at how HGTV did something similar with wooden crates that they painted to match their colour scheme.

Perhaps you’re a huge fan of the suggestion of mounted storage baskets or cubbies but your wall space is actually so limited that you’re just not sure you’ll be able to fit any? Then we think you might get along a little better with this idea from Remodelaholic that shows you how to mount some storage bins on the inside of cabinet door instead! 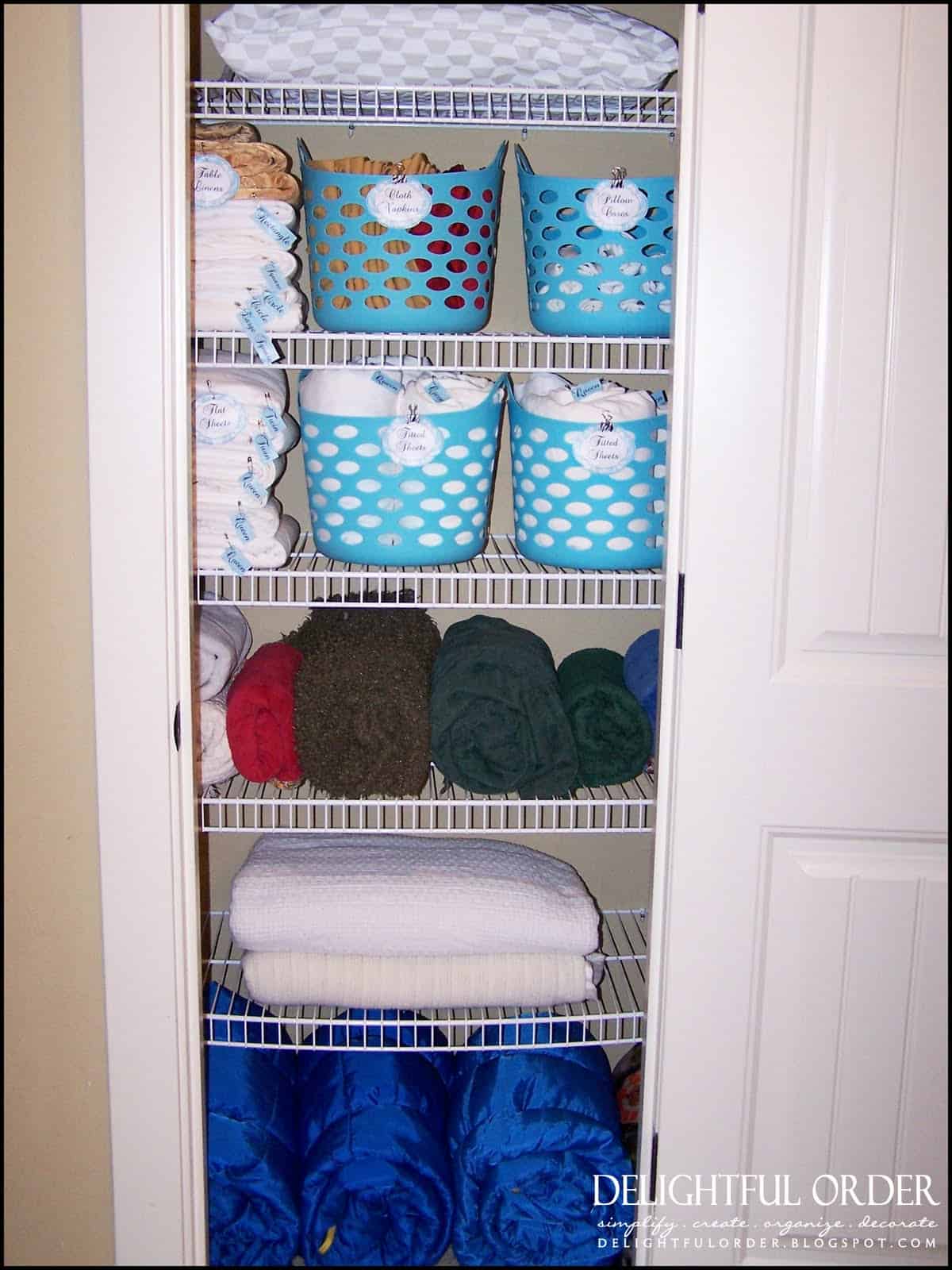 Perhaps you actually do have a little bit of storage in your smallest bathroom in the form of a little linen closet but it’s not very much and you’re convinced there’s got to be a better way to organize it? In that case, we have a feeling you’l really appreciate the way Delightful Order used some simply installed wire shelving and some labelled baskets to make their own limited closet space a little more efficient. 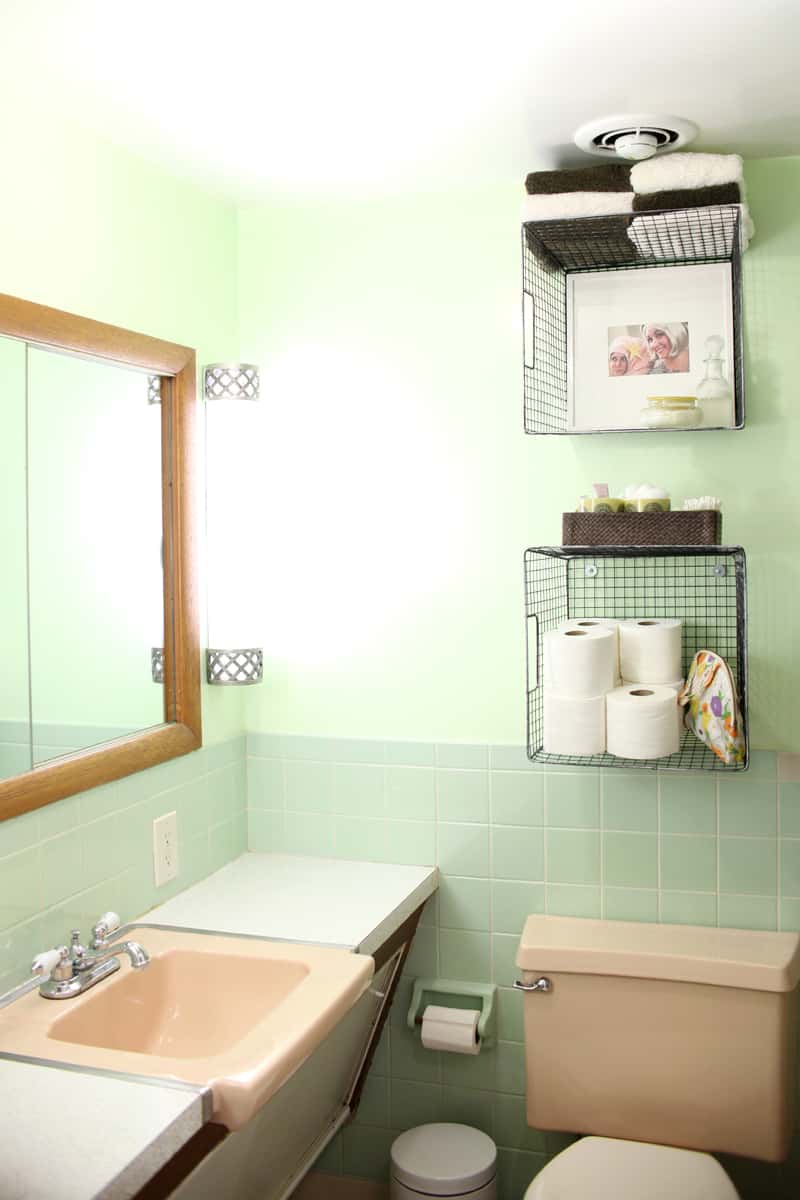 Are you still feeling rather intrigued by the idea of crates turned on their sides and mounted to the wall in order to make storage but you’re just not sure that the rustic wooden look is really the one for you? Maybe you’re looking for a version of the same idea that’s a little cheaper that what you’re seen so far. In either case, we’d absolutely suggest taking a look at the way Cute DIY Projects made their turned and mounted storage from simple wire baskets.

7. Vintage ladder shelf for bathrooms with no counters 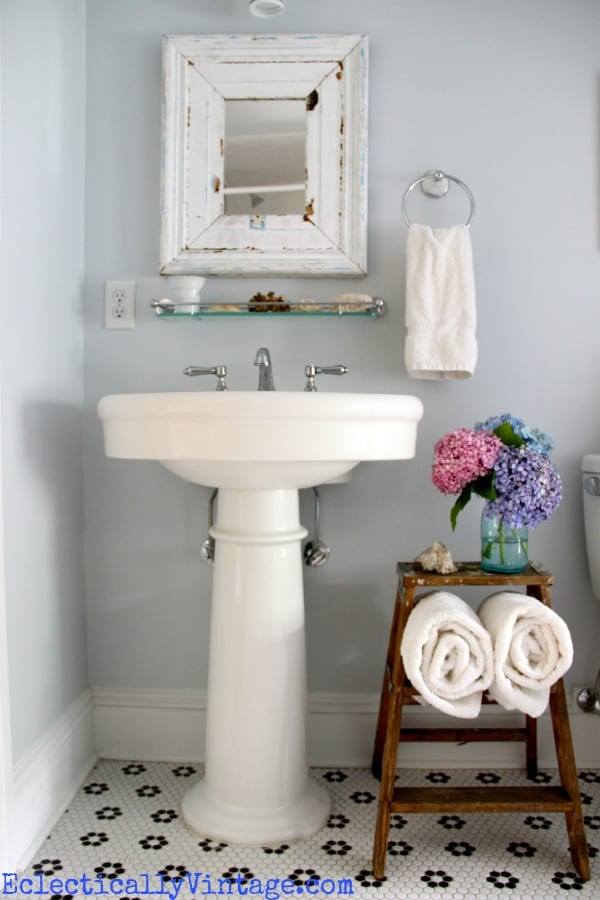 Perhaps you’re actually really in love with the small, old fashioned “wash closet” style of your littlest bathroom but you’re still in need or somewhere to put at least a couple things because your standing sink doesn’t offer any counter space at all? In that case, we’d definitely suggest taking a look at how Kelly Elko turned a rustic looking step stool into a little storage shelf in a way that suits the room’s aesthetic and takes advantage of a space that probably wouldn’t otherwise be used. 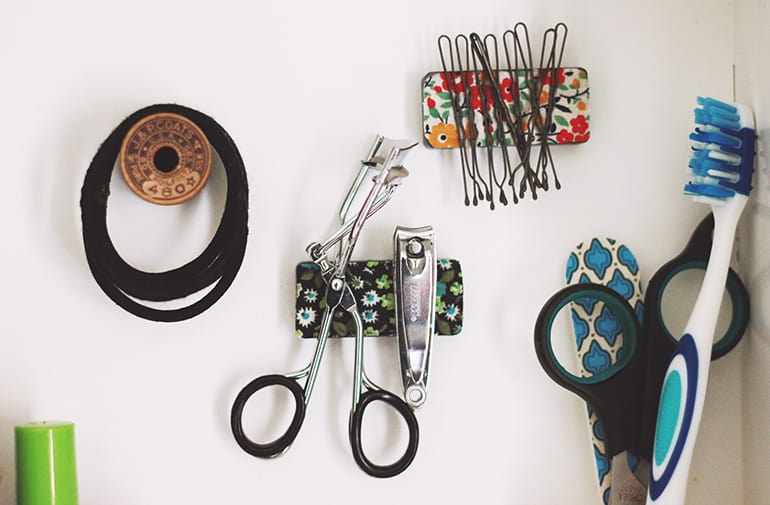 Perhaps you’ve been trying to find yourself something very simple and affordable that will help you organize a few of your smaller supplies? You the kind; those little bits and pieces that you use all the time but that often cause you clutter on the countertop. In that case, we have a feeling you’ll get a kick out of the way The Merry Thought used magnets to organize at least those little bathroom tools that have a bit of metal to them! 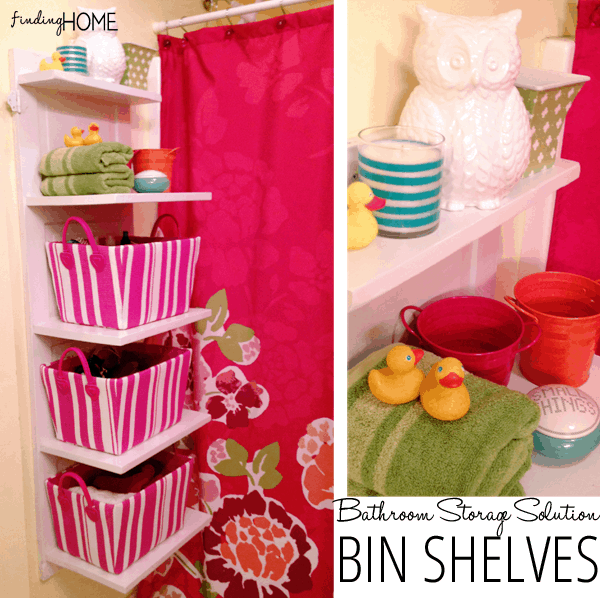 Have you actually been thinking about the different options you’ve seen so far when it comes to choosing between mounted shelving and storage bins in a bathroom and realized that you’re not sure one or the other will be better for your kids, who you’re trying to encourage to help you keep the bathroom clean? Then maybe you’d prefer a blend of each option! We love the way Finding Home Farms installed some space efficient vertical shelves and placed an affordable storage basket on each one. 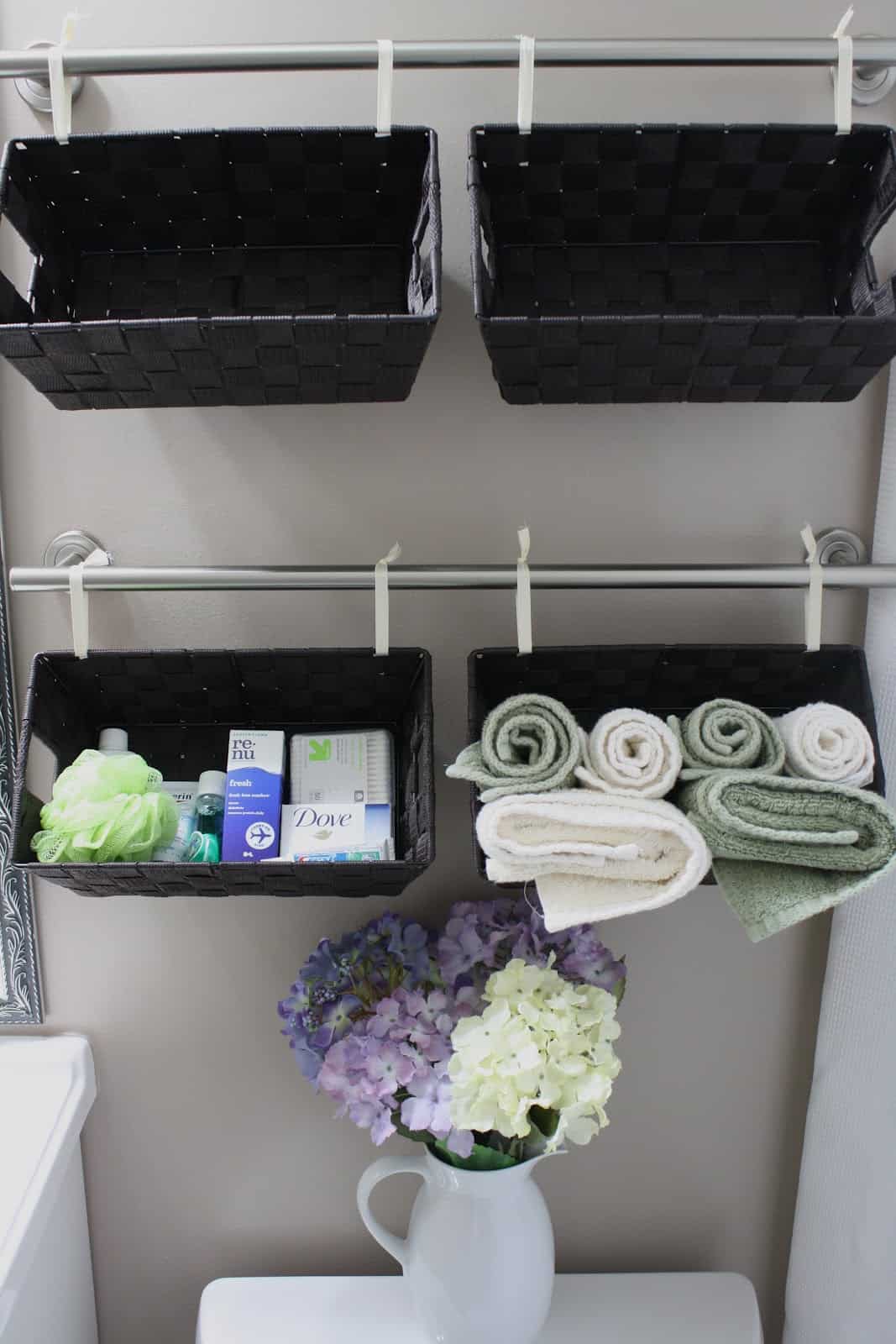 Perhaps you’re stilling thinking about how much you like the idea of hanging some simple baskets as bathroom storage in your smallest washroom but you have a big gamily and you want to make sure they’re hung in a way that’s a little more solid than the sticky hooks you a used in the previous tutorials we showed you? In that case, we think you might get along a little better using towel bars for your baskets, just like Simply DIY 2 did here! 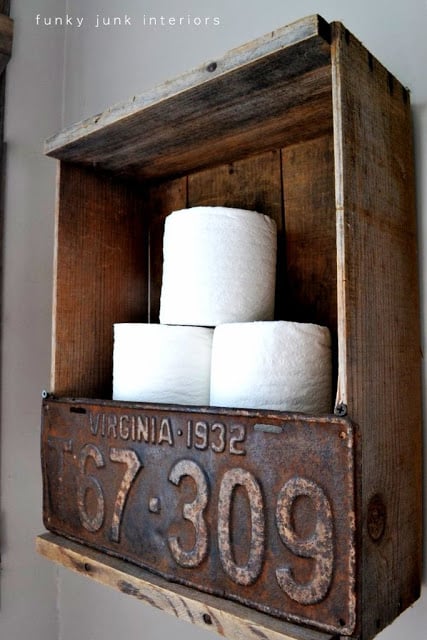 In our little bathroom, one of the things we know we need to store but have had trouble finding a useful solution for is the extra toilet paper we always keep on hand! we liked the crate idea we saw earlier, but we also found that not having any kind of edge or lip on the shelf made the rolls more likely to fall. That’s why we thought this rustic chic tutorial from Funky Junk Interiors that uses an old upcycled license plate as a sort of bar on the edge of the wall mounted crate was such a good idea.

Just in case you’re feeling a little more up for a challenge and you’re actually quite handy indeed at home projects, here’s a concept that will help you save space in terms of pieces jutting outwards from your walls into the room where to need to move!We love the way Liz Marie built an inset medicine cabinet so that the things you store there have their own space without being inconvenient. 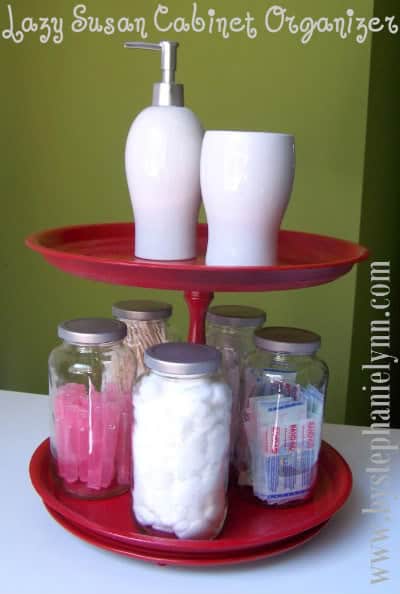 Rather than making yourself any kind of cabinet or shelving, would you rather create something a little more accessible that might sit right there on the counter where you can reach your things nice and easily? In that case, we’d definitely suggest taking a look at the way By Stephanie Lynn made a “lazy Susan” style cabinet organizer that sits in tiers and turns easily. 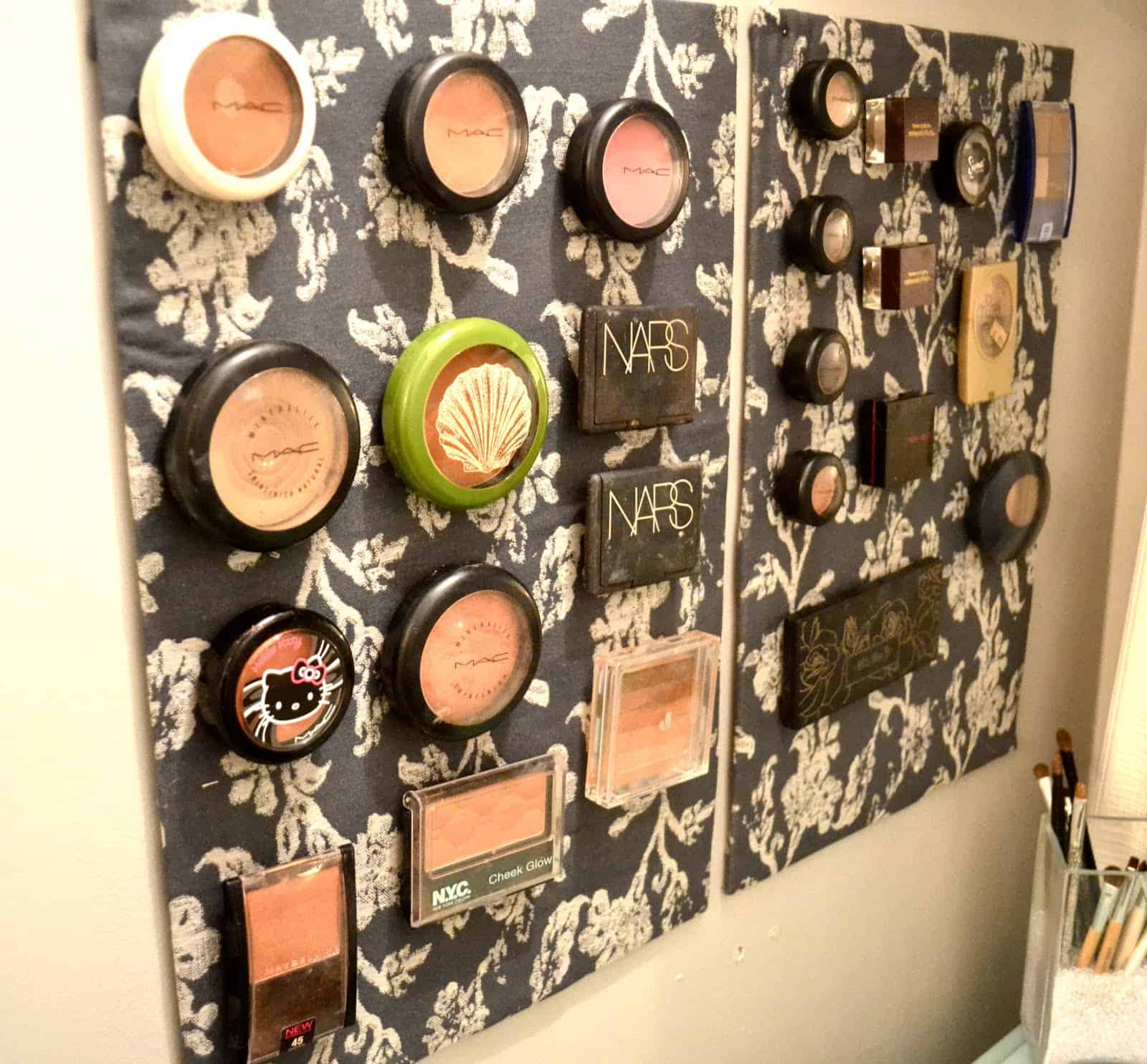 Were you actually a huge fan of the idea of making yourself some simple storage using magnets because you loved how the concept got small clutter up off your counter but now you can’t help wondering whether you might apply the same idea to other things you need in your bathroom too? Well, makeup enthusiasts rejoice because we’ve got a version of the same idea for you! Liz Marie helps you keep your compacts organized using magnets by building a mounted metal board covered in patterned fabric. 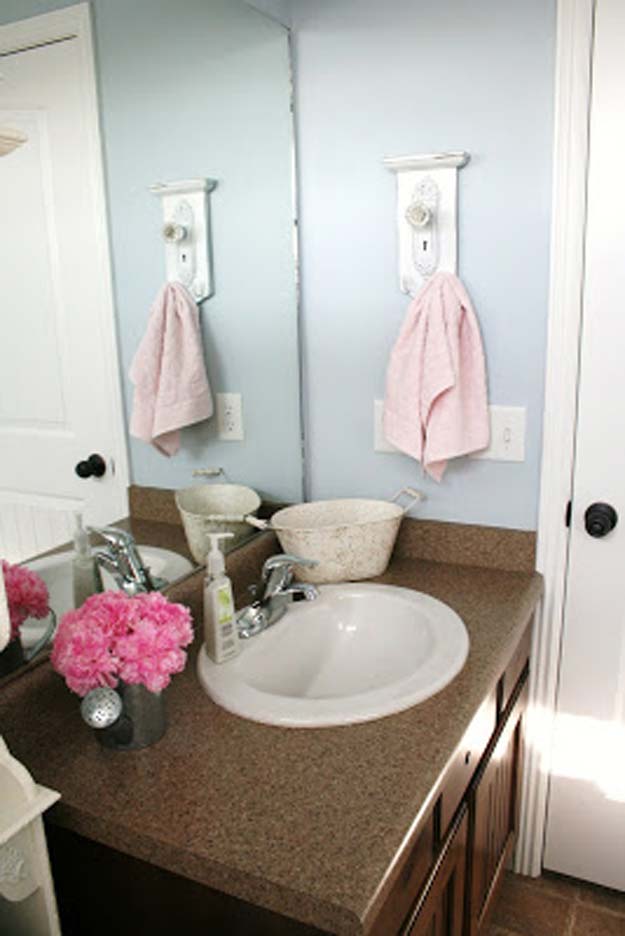 Perhaps the thing you’re most interested in doing in your smallest bathroom is building a strong aesthetic rather than increasing the amount of storage that’s available? Well, that doesn’t mean you can’t still create something practical and useful! For bathrooms with a lovely vintage aesthetic, we love the way The House of Smiths used old fashioned knobs from cabinet doors to hang their hand towels rather than wide towel racks or bars that take up more space.

Do you have another suggestion for a crafty or DIY based project that would work great for a small bathroom that you don’t see here on our list? Tell us all about it or link us to photos of your finished work in the comments section if it’s something you’ve made before! 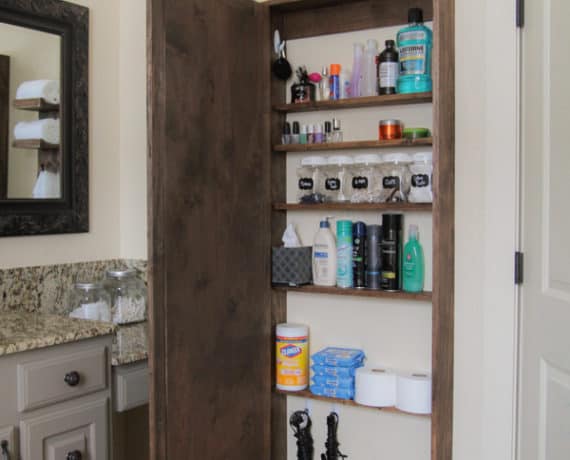