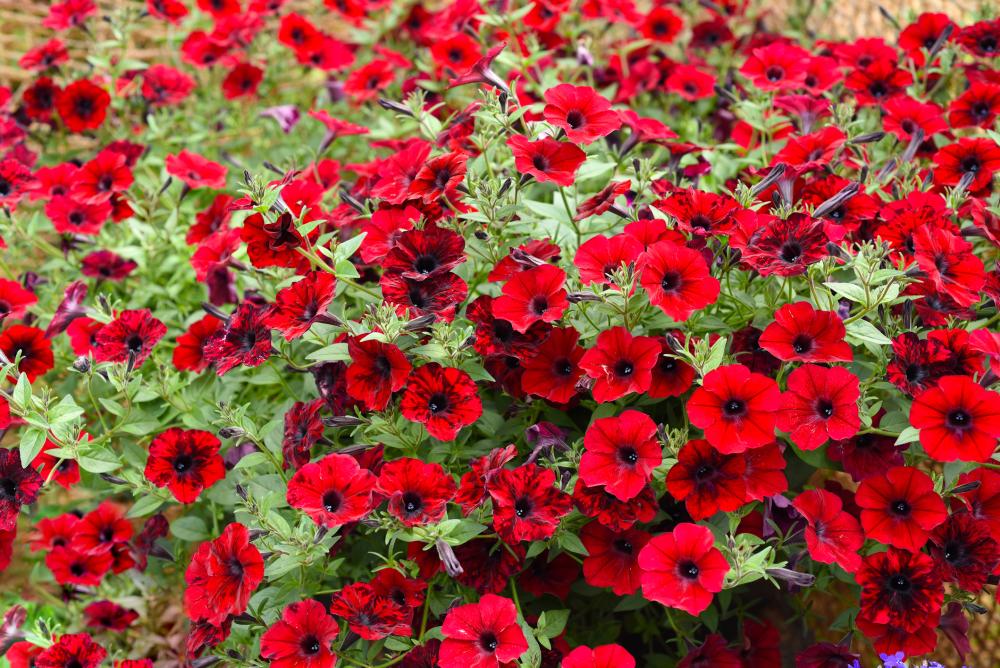 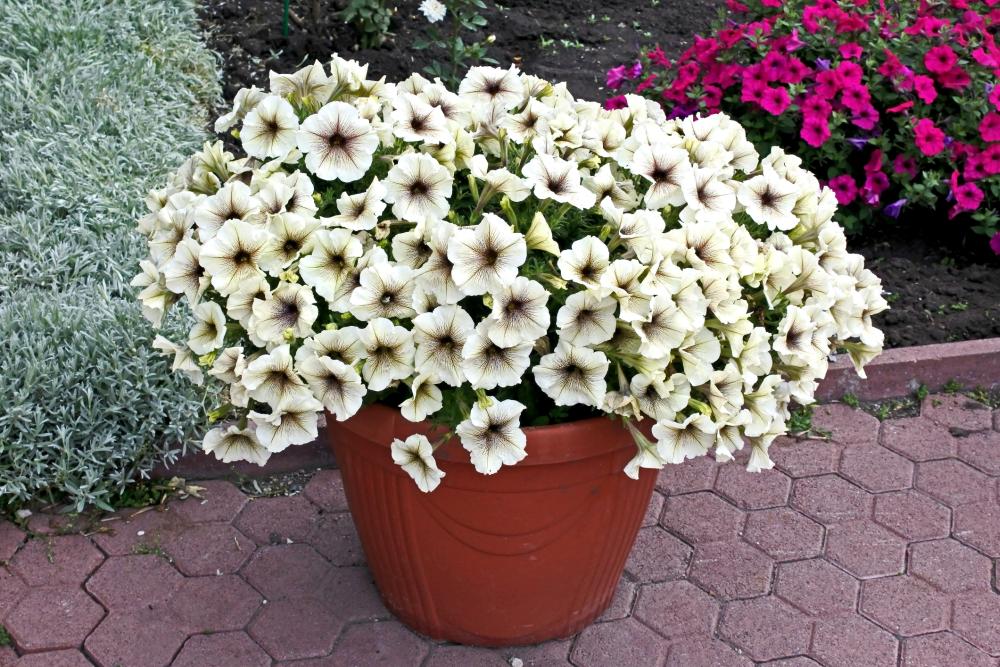 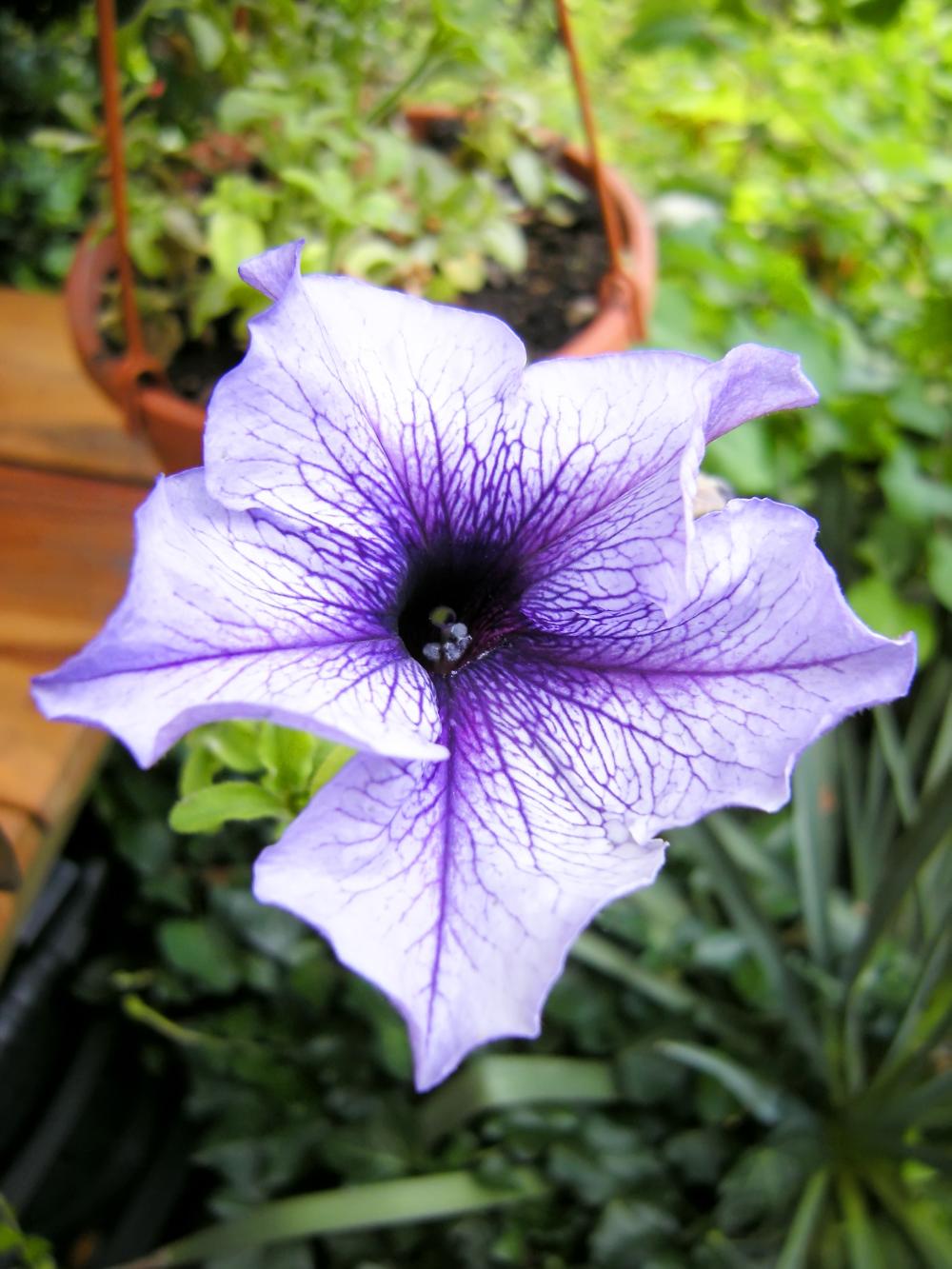 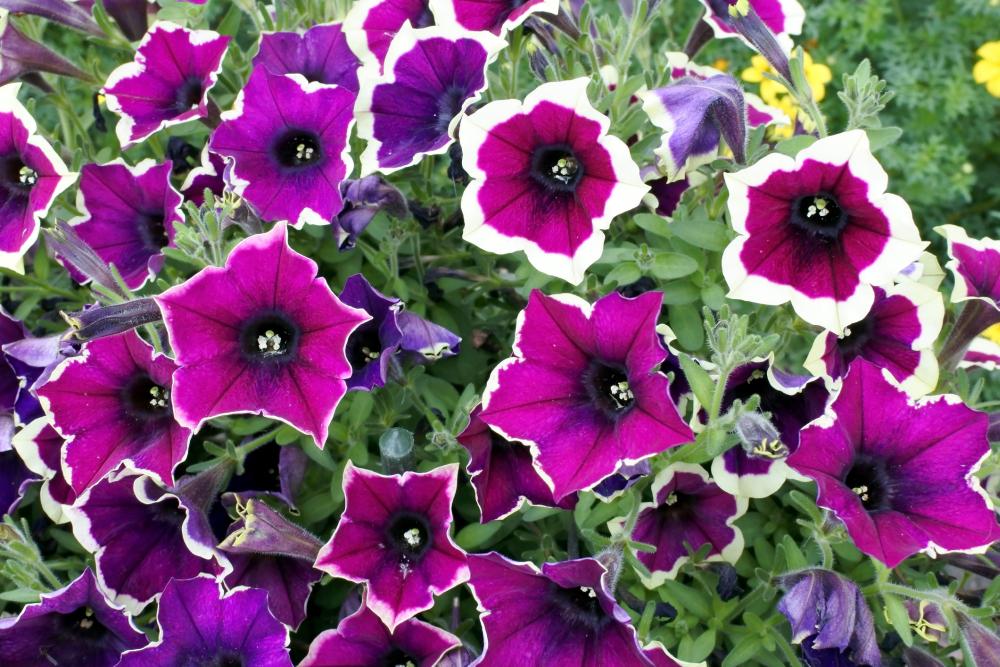 If the delicate beauty of the petunia doesn’t tempt you, then its varieties surely will. As Andy Warhol proved repeatedly, a single can of soup doesn’t mean much from an aesthetic point of view, but a bunch of them arranged together become art. And while petunias have aesthetic values both as singles or in groups, the more petunia varieties you have, the better your overall designs. 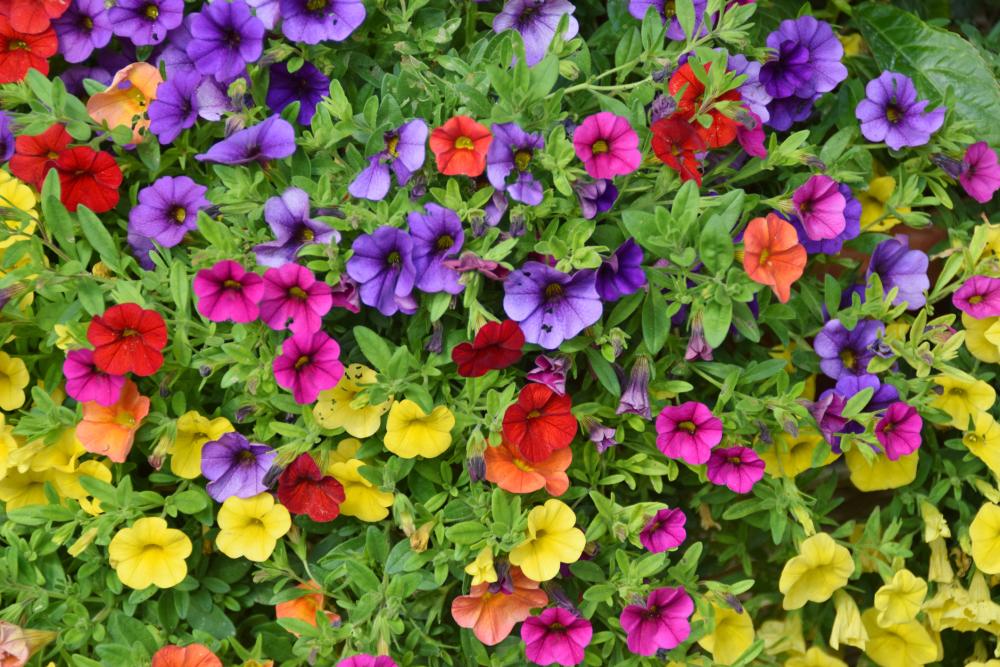 But as you’ll soon find out, not all petunias go together. It’s true that you can go overboard with your color schemes and combinations, and petunias certainly have the diversity of cultivars and species to satisfy the most outlandish designs. But in the end, you’d want to settle for a bunch of flowers that please the eye and calm the soul, not cause the mind to spiral out of control.

In the end, it’s your space and you can fill it up with the types of petunia varieties you prefer. Here are some of the more popular varieties to consider.

While many petunia species occur naturally in the wild and have distinctive appeal, the petunia cultivars usually win the awards at the end of the day. Limelight is one of those cultivars that easily steals your heart with its magenta colors and lime green outlines. It’s the kind of color combination that leaves you at a loss for words.

Magenta and lime green are hardly the colors you’d like to pair together in any other setting. But for some reason, they work in the Limelight. And since it’s a relatively recent cultivar that first made its appearance in 2013, you’ll be most likely the first in your neighborhood to grow the luminous cultivar.

On average, the mature plant grows to about 10 inches high. So it’s ideal as a houseplant or a potted plant that you can keep on window sills, balconies, patios, and dotting the entrances and pathways. You can only grow it outdoors in zones 10 and 11, but as a potted plant, it grows in any zone from 2 to 11. Just make sure to bring it indoors when the weather gets cooler by the end of summer. Just make sure the plant gets around 6 hours of sunlight during the growing season.

The parents of Cascadias Rim Magenta originally hail from South America, but the cultivar really takes your breath away with its lush green foliage and dark flowers. You read that right. The Cascadias Rim Magenta cultivar has dark flowers that look like black holes in the greenery. But just so that the blooms won’t fade in the background, they got creamy yellow outlines.

I mean dark flowers are not and have never been so popular. Flowers have bright colors that make them stand out, not hide into obscurity. But the Cascadias Rim Magenta pulls it off with dark blooms on a green background. Whether that’s your cup of tea or not depends on the design you’re going for. If you’re looking for something catchy that sticks out and forces you to look twice, then the black holes of blooms will do a good job of that.

Like many other petunia cultivars, you can plant this cultivar outdoors in zones 10 and 11 and keep it as a potted plant in zones 2 to 11. Either way, it thrives in partial shade or filtered light. It grows up to 16 inches high which is considered compact and manageable for a houseplant.

Some cultivar names are quite specific to the characteristics of the plants they identify. Others are just right down mystifying. The Fortunia Early Blue Vein cultivar belongs to the latter group. Hard as I looked, I couldn’t find that blue vein that presumably distinguished this member of the Fortunia cultivars and made it stand out. Perhaps it was the distinguishing marks of the early specimens and later all traces of blue color vanished from subsequent descendants.

The mystery of the vanishing blue vein aside, the blooms of this cultivar are pure silver with deep purple hearts. And since it grows well in different zones and growing seasons of various lengths, you can expect the Fortunia Early Blue Vein to bloom earlier than other petunia cultivars.

With parents originating in South America, this cultivar is a good option to add some vivid colors to your garden in zones 10 and 11. Otherwise, you can plant it indoors in zones 2 to 11 and bring it out in the summer to enjoy the warm sun during the day. The average plant won’t grow above 11 inches and can be as low as 8 inches short.

Another cultivar with a confusing name. While the blooms of the Mini Rose Blast Pink definitely have hints of pink, it can hardly be described as a blast of pink. And there’s no resemblance whatsoever between this petunia cultivar with its flat and open blooms and the famous rose with its intricate and weaving petals hugging each other closely.

But having a misnomer should be no basis to judge this petunia. For one thing, a single cultivar produces an abundance of blooms that cover every inch of the plant and almost hide the dark green leaves completely. And since the pink is not that sharp or overpowering, the blooms maintain an air of dignity and subliminal haughtiness that keep it within the boundaries of good taste.

Although the grown petunia doesn’t exceed 8 inches in height on a good day, it spreads out in a well-branched structure that gives it the appearance of a floral arrangement. One can easily mistake the potted petunia for a vase and you can get away with placing it on top of the coffee table or the dining table without raising eyebrows.

Like many petunia varieties on this list, the Mini Rose Blast Pink grows in zones 10 and 11 and thrives in partial shade or bright sun.

When you want to add a new flowering plant to your garden, that plant has to meet certain criteria. Among those, it should blend well with the rest of the flowers growing there. And that feature alone is what makes Prism Sunshine such a popular petunia cultivar.

Admittedly, the blooms of the Prism Sunshine don’t exactly sweep you off your feet and transport you to a dreamland of colors and fragrances. The flowers of this cultivar have a modest greenish-yellow color that if anything avoids getting your attention. But in some designs and flower beds, that’s exactly what you’d like. You want a sidekick that augments the beauty of the star of the show, not upstages them.

And that’s what Prism Sunshine is good at. It remains in your peripheral vision with its subdued colors without demanding your full attention. So you can pair it with any showy bloom to create an amazing combination.

This cultivar too was crossbred from two petunias that hail from South America. It maintains its parents’ preference for tropical conditions and is hardy to zones 10 and 11. If you want to grow it indoors, then it won’t matter which zone you live in. The Prism Sunshine averages between 10 and 12 inches and does well both in partial shade and full sun.

The first thought that comes to mind when you see the Purple Pirouette is that whoever designed it has a passion for colors. The splashes of purple on a white background are simply too stunning to ignore. This is the type of cultivar to grow in the center of your flower bed to show off and make your neighbors jealous.

And since the mature plant grows to about 15 inches towering over other petunia cultivars, it sure will stick out and display its purple splendor for all the world to see. The only problem is that it also attracts pests when in full bloom. One particular pest, tobacco budworm, has developed a taste for the flower and will travel miles just to land on a Purple Pirouette cultivar growing alone in a garden.

You can grow this cultivar both in full sun or partial shade since its parents grow in the rainforests of the Amazon. Zones 10 and 11 are suitable for outdoor planting while the rest of the zones require keeping it indoors for most of the year.

For once, the petunia botanists got the name right. This cultivar takes the color red with its different shades to a whole new level. Forget about roses being the symbol of passionate love and consider the Potunia Plus Red in your garden.

The average cultivar which also comes from South America grows to about 12 inches at most with a matching compact spread. Yet once the blooms open, the whole pot turns into a glowing center of red attraction. You can expect around 10 trumpet-shaped blooms per cultivar every season, but as they’re well arranged against the dark green background they look like a floral arrangement about to be sent out to a wedding.

The Potunia Plus Red does well as a single houseplant or in combination with other less showy petunias such as the Prism Sunshine. And thanks to its drought tolerance, you can grow it in zones 10 to 12 with minimum watering. However, I recommend you keep this plant indoors even if you live in these zones. Its beauty is worthy of the brightest window sill in your house.

While petunia cultivars are known for going all out on the color combinations and trying to be as multi-color as possible, some cultivars are happy to display a single color. We saw the Potunia Plus Red do that with the color red and the Wave Blue does the same with one color block.

Although blue is the prevalent color here, sometimes the blooms will look more purple than blue in the right light. Be that as it may, there’s more to the Wave Blue than their color-shifting qualities. And one of those enticing features is the way they branch out and arch over the edges of the pot. This is not a cultivar that stays within the confines of the container you plant it in.

As such, you can grow the Wave Blue cultivar in hanging baskets and enjoy the splashes of purple/blue greeting your eyes in the morning.

This award-winning cultivar can reach 10 inches at most and does well both in full sun and partial shade. You can group it with the Potunia Plus Red and Purple Pirouette and let all three blooms compete for your attention.

Whether you like your petunias to display multiple colors or a single shade of one color, you have many options from these selected petunia varieties we shortlisted for you. There are hundreds more of petunia cultivars to look at, but we got a feeling that those 8 cultivars are enough to help you grow your artistic and gardening chops.

Petunia Growing Problems And Ways To Fix Them

Mexican Petunia Care: How to Grow & Care for the Ruellia Brittoniana Plant

10 Gorgeous Anemone Varieties For Your Garden