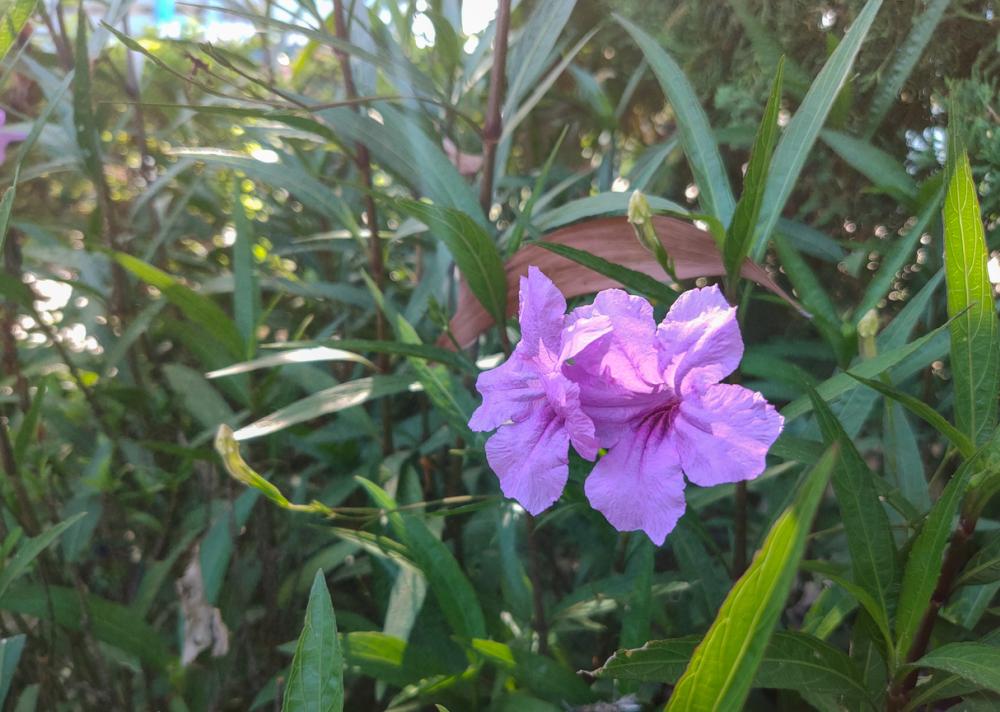 Purple blooms and dark green foliage make your landscape have a grandeur appearance. If you’re looking to have a well-groomed garden, adding a little bit of color by growing flowering plants would help create a phenomenal visual appeal. 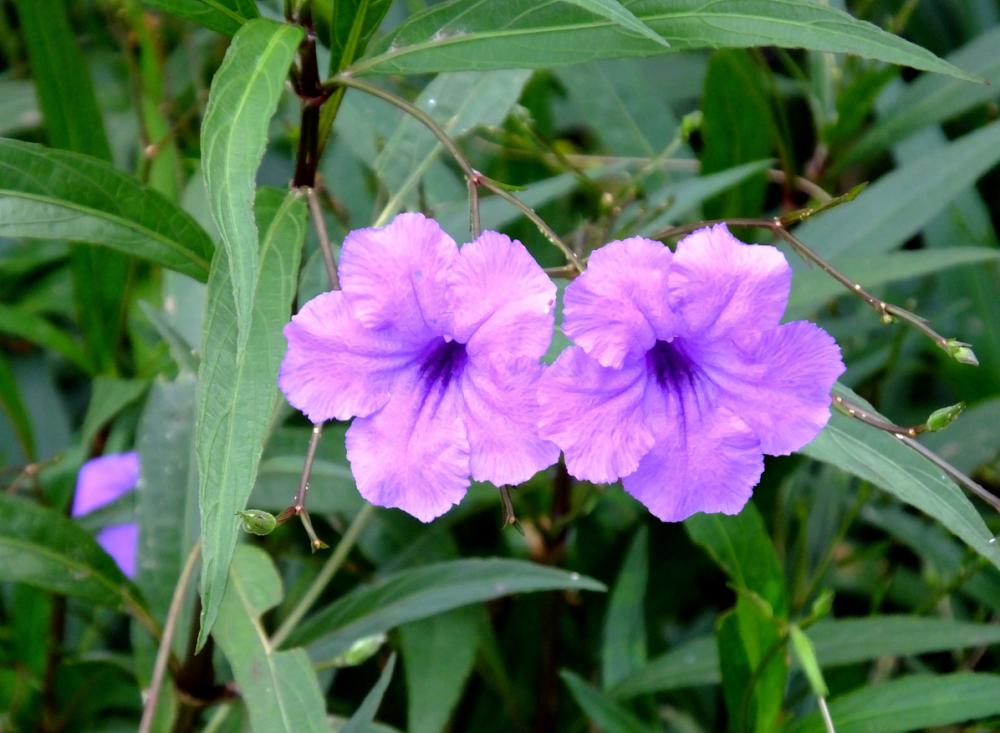 Growing the Mexican petunia plant is an idealistic option that would match up with such expectations. It’s a heat-tolerant plant that fits the outdoor setting but prefers shady locations. Let’s check out the best practices that you need to work with when growing and caring for the Mexican petunia.

The Mexican Petunia at a Glance

Mexican petunias show their vibrancy especially when they’re in the adult stage. What makes this plant a choice for many growers is its rugged trait to garner intense tolerance against heat or drought. Just like the name hints out, the plant is native to Mexico. It comes from the Ruellia genus which belongs to the Acanthaceae family. The botanical name for this flowering shrub is Reullia Brittoniana.

While Mexico is its indigenous place, you’ll find the Mexican petunia growing dominantly in the Caribbean and South America. Other names the plant goes by include:

This plant is commonly referred to as Mexican petunia. But in actual fact, it’s not a petunia. The shrub is a low-growing plant that features some dark purple blooms and green leaves. Over time, the plant will reach an equal height and diameter of between 3’ to 6’ inches. The lance-shaped leaves are usually held by colonies of stalks. 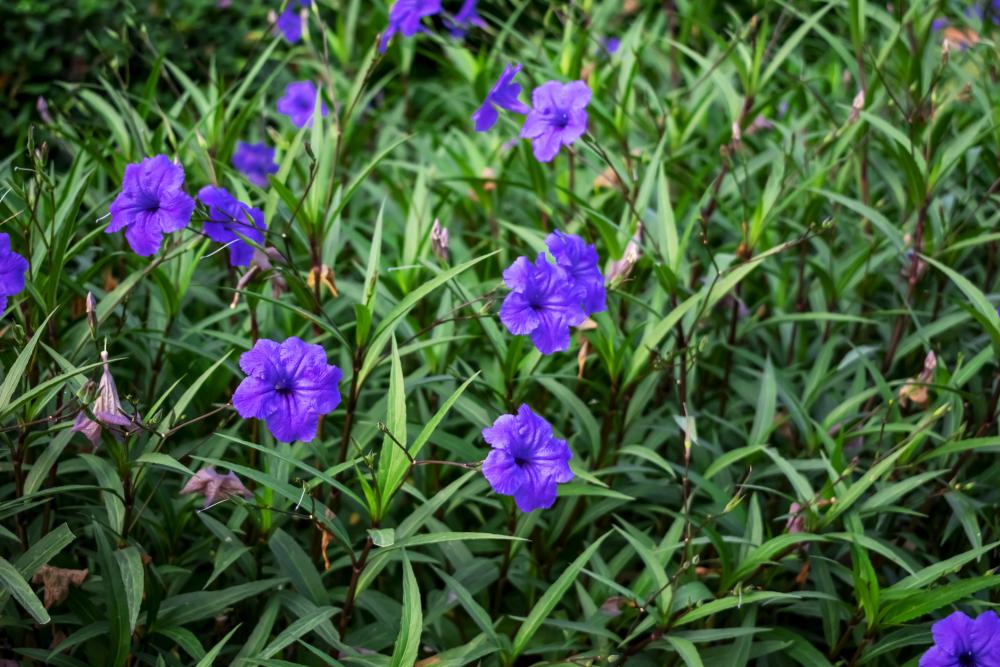 Compared to other shrubs in the Ruellia genus, the Mexican bluebell is more of a bountiful bloomer. The flowers usually have a violet tone and will last for a long time during the blooming season. However, the blooms don’t have any discernible fragrance. You can expect this bloomer to produce flowers from the middle of summer till the end of fall. Each flower will roughly have a diameter of about 2’ inches.

What we learned about the Mexican petunia plant is it’s not picky when it comes to the type of soil. Use organic-rich soil that drains excess moisture quite effectively when propagating this shrub. Try to tweak the soil so it can be slightly acidic by adding an amendment like sphagnum peat. It’s still possible for the plant to tolerate alkaline soil. Overall, it’s best to check the soil pH before planting this landscaping bloomer. Add some compost to make it nutrient-rich and accelerate the drainage rate. Compost also helps reduce soil crusting. If you want your Mexican bluebell to have dark-green foliage, then you need to use soil that has a significant nitrogen composition. If the soil is lacking the essential nutrients, chances are this plant will struggle to mature profusely.

On the other hand, if nitrogen is in excess, the plant will have a weak root structure, but the body mass of the foliage will appear unusually enormous. You can flush out the extra nitrogen deposits with water, replace the soil entirely, or use organic remedies like mulching. Mulching, when used properly, can also help with moisture retention. To give the plant an opportunity to bounce back, the best time for transplanting would be during the early weeks of spring when temperatures are warm. This is the optimal time to replace the old soil as well as move the plant into a bigger container if it was starting to get root-bound. Make sure to use a container with enough drainage holes that will let out any excess moisture.

The Mexican bluebell likes to grow under bright light. Some partial shade is, however, quite much essential. Any intense heat from the sun could burn the leaves, hence you want to keep that from happening. But that’s not meant to make you overly protective since the plant has higher chances of producing colorful blooms if it’s receiving enough sunlight for a constant period of time each day. The color of the stems will also highly depend on the amount of light they receive.

If the flower stems are purple, then it means the light conditions are optimal. About 6 hours of bright, indirect light every day should be enough. And if you’re living in an area where the summer months aren’t too hot, there won’t be much need for using partial shade. You don’t need to panic about the warm conditions during summer since this plant has a solid drought tolerance capacity. On the other hand, your Mexican bluebell plant might fail to survive when the conditions are extremely cold. Therefore, overwintering the plant would be a worthwhile thing to do. We recommend growing the shrub inside a container even when you’re growing it in the garden so that moving it indoors won’t be a painstaking task.

One typical trait about the Mexican bluebell plant is it usually doesn’t demand intense humid conditions. It can tolerate a dry environment or a damp location—whichever place you want to work with. The only downside is chances of blooming are slim if the plant is growing in a place where temperatures are extremely low.

For this reason, if you’re living in a region with extreme temperatures—cold winters and hot summers—the most optimal thing to do would be to grow the plant as an annual. Keeping the plant from frost is something worth considering if especially you’re looking to save your Mexican bluebell for the next growing season.

When it’s daytime, the shrub will do well under temperatures ranging from 60 to 75 degrees Fahrenheit. During the night, it prefers temperatures that fall anywhere between 55 to 65 degrees Fahrenheit. To protect the flowers from dying off before their blooming period is over, aim for low humidity levels throughout the seasons. The recommended growing region for this member of the Ruellia genus is USDA hardiness zones 8-11.

Having hardy traits, the plant is capable of surviving drought conditions. It can also keep up with a flooded environment. The optimal formula to use on this plant is watering evenly to keep the soil moist at all times. A mature Mexican bluebell usually has firm stems and rugged foliage. It can stay alive without regular watering, unlike the younger plants that are still in their sprouting stage. During colder months, you want to cut back on the number of times you water the shrub quite drastically. When temperatures are extremely low, drainage will take much longer compared to when it’s warm. Soggy soil could also damage the roots.

Root rot, when intense, can prompt you to entirely get rid of the plant. So, you want to avoid overwatering at all costs. However, after transplanting during the spring season, go back to regular watering so the plant can recoup its vigor and energy to grow optimally. Once the plant hits maturity, you can water it just once every month from spring till autumn. It’s also worth noting that amending the soil with sand helps with the rate of drainage.

At all times, the Mexican bluebell prefers to be fed with a balanced fertilizer. That’s to suggest it needs to be in the ratio of 10-10-10. Dilute a tablespoon of the fertilizer in water before spraying it on the plant. When potting it, adding some compost could also help supply the plant with essential nutrients it needs to produce flowers, have a sturdy root structure, and dense-green foliage every season. You can pick a fertilizer that’s tailored to meet the nutritional needs of flowering plants. Remember to draw any excess nitrogen from the ground and make sure to loosen up the soil before planting the shrub. The best time to begin fertilizing your Mexican bluebell is during the early weeks of spring. Once every month will be enough since this shrub doesn’t need to be heavily fed.

For the most part, this plant doesn’t give the owner a hard time maintaining it. It’s self-reliant and there won’t be much grooming to do. To encourage bushier growth, pinch the stems back during the designated days for grooming. Get rid of any leaves that look overly faded or appearing to have wilted. Watch out for the rate of growth because this plant is known for being invasive when left unattended. Trim the plant regularly to maintain its appearance.

How to Propagate the Mexican Petunia Plant

It’s easy to propagate the Mexican bluebell using stem cuttings. The best time for propagating this shrub is during the summer or spring season when the growth hormones are no longer in their dormancy phase. On the bright side, you don’t need to put in the burdensome efforts of propagating using stem cuttings. The plant can self-propagate via seeds.

Seeds will fall off from the mother plant and will reproduce new Mexican bluebell plants. So, if you’re looking to use this method, you’ll need to be a little patient and wait for the flowers to turn into seeds. Here are a few steps you can make reference to when propagating using seeds:

It’s rare for the Mexican petunia plant to suffer from serious problems. Extreme weather is, however, a major issue that can cause irreparable damage to this plant. Protect the plant from frost during winter by moving it indoors. Also, make sure to grow this shrub under partial shade if you’re living in an area where summer months are extremely hot. While it doesn’t happen quite often, it’s possible for the blooms to get infested by spider mites. Other pests you might need to watch out for include aphids, slugs, snails, and flea beetles. They like feeding on the leaves and stems—causing the plant to lose its vigor over time. If you’re living in a wet climate, there are chances your Mexican bluebell will suffer from fungal infections like gray mold or powdery mildew.

Petunia Growing Problems And Ways To Fix Them

8 Gorgeous Petunia Varieties For All Color Schemes And Occasions