As much as we adore the look of full sized pumpkins, as well as all of the different things you can do with them, we’ve actually always been the biggest fan of min pumpkins! There’s just something so cute and decor worthy about them that makes us want to put them all over our house, on the inside and out. That’s why we always spend our fall season with our eyes peeled for neat ways to turn them into cool DIY projects!

If you’re feeling just as eager as we are, if not more, to do some mini pumpkin based DIY, check out these 15 awesome ideas, designs, and tutorials that we came across in our search for inspiration and guidance. 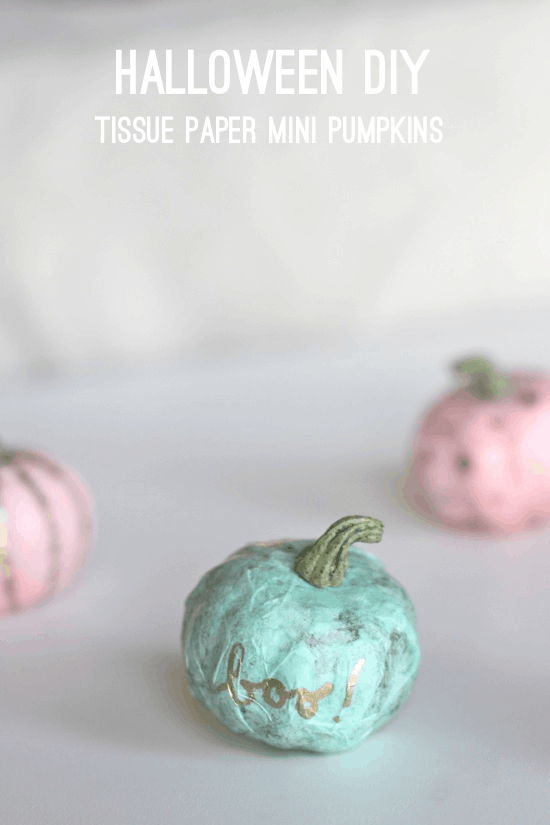 Of course, even within the category of “mini pumpkins”, there are several different sizes of pumpkin. What caught our eye about this particular tutorial, besides the fact that they used pastel colours which are our favourite kind of shade, is the fact that they used the tiniest pumpkins they could possibly find! Check out this tutorial on Paper n’ Stitch to see how they did a little bit of tissue paper decoupage to give these adorable little pumpkins their new shade. 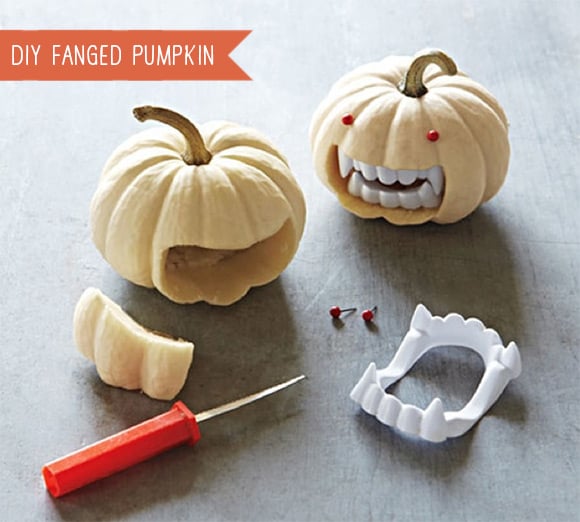 Just because your mini pumpkins are a little smaller than the average full sized one that you might carve doesn’t mean that you can’t still cut into them for the sake of creativity! Rather than trying to fit an entire cut out face onto the limited surface of your mini pumpkin like you would with a jack-o-lantern, check out how Martha Stewart cut just a section out near the bottom large enough to fit a pair of plastic fangs inside. Add some colour topped pins for eyes and voila! You’ve created a tiny pumpkin vampire. 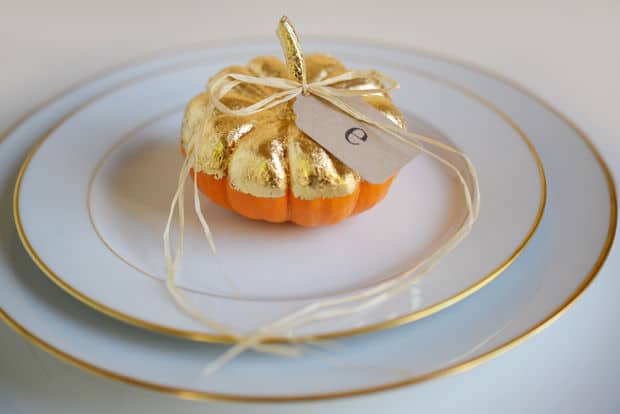 In your family, is celebrating harvest and hosting a fantastic dinner filled with people you love just as important a part of October as Halloween is? Then perhaps you’d rather use your mini pumpkins to create awesome harvest place cards! Cupcakes and Cashmere walks you step by step through the process of gold dipping them so they have a bit of glamour and shine. 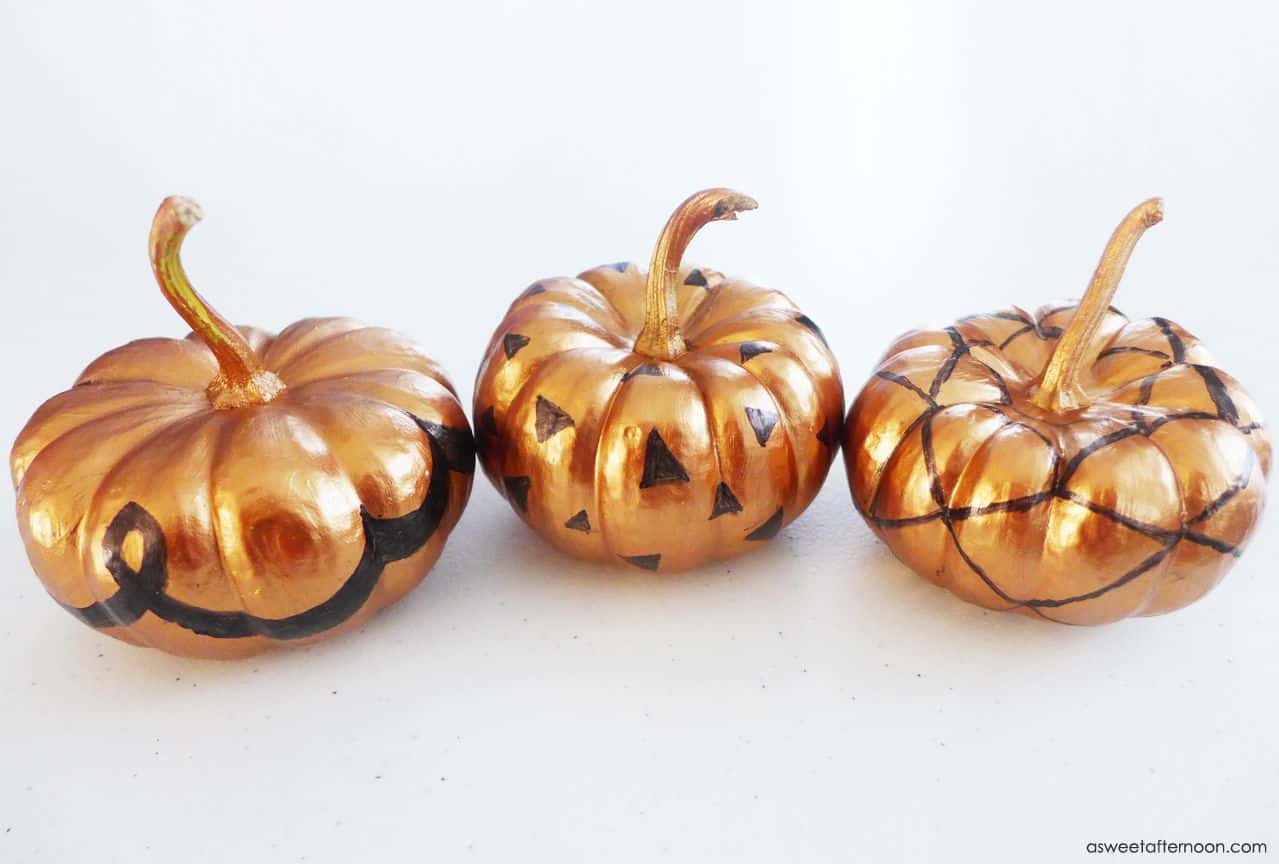 Painting min pumpkins rather than carving into them is a rather common project, but what if you can’t help feeling that your painted pumpkins could use a little something extra? In that case, we’d definitely suggest taking a look at how A Sweet Afternoon made these fantastic metallic painted pumpkins that have some kind of awesome patterning or visual interest that was hand drawn with a permanent marker, making them awesomely customizable! 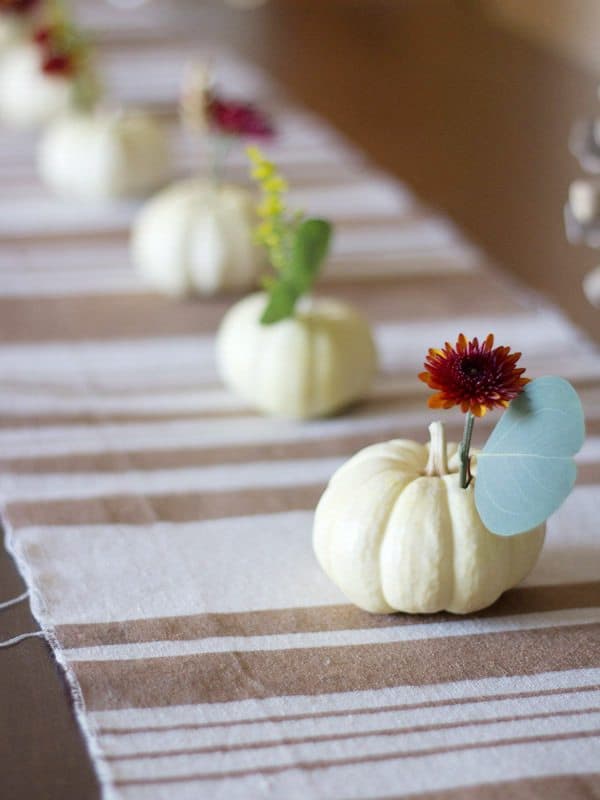 Perhaps you live in a place that doesn’t actually get very cold in the fall and you’re looking for some kind of pumpkin based decor piece that will also let you pay tribute to the gardens that are still blooming in your yard outside? In that case, we think you just might be the perfect person to give these fantastic floral mini pumpkin centrepieces outlined in awesome detail on The Sweetest Occasion a try!

Are you actually mostly a huge fan of the mini pumpkins because you’re really a huge fan of all plants? Then we have a feeling you’ll get a real kick out of any idea that involves using your green thumb to make those pumpkins even more plant-centric than they already are! Take a better look at this tutorial from Living Locurto to see how they made mini pumpkin succulent centrepieces that will add a sense of freshness to your autumn tablescape. 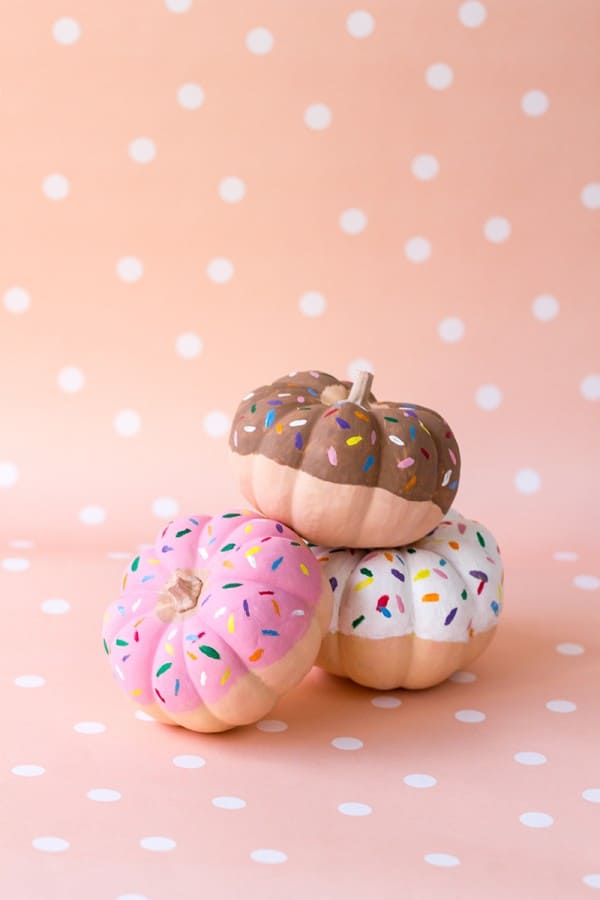 Did we really catch your attention when we started talking about the idea of painting your pumpkins but, since hand painting is actually your favourite kind of art and DIY project, you’re looking to make something with a little more detail, even if it doesn’t directly related to Halloween or the autumn season in its visuals? Then we have a sneaking suspicion you’ll get a real kick out of the way Studio DIY made their adorable little pumpkins look like iced donuts, complete with sprinkles! 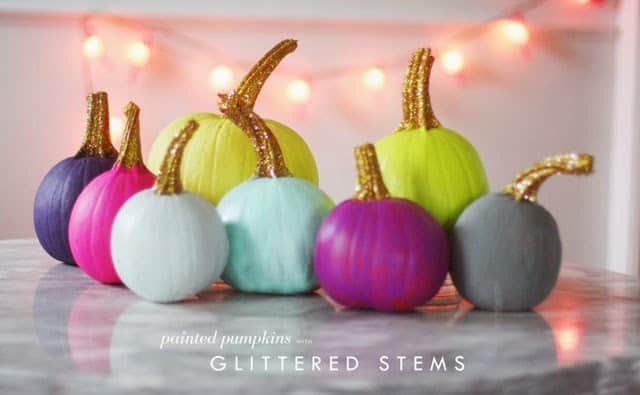 Are you actually stilling finding yourself scrolling through our list and thinking about how much you love the idea of painting your little pumpkins any bright colour you please, whether it looks like fall or not, but you’re also the kind of person who likes to go all out in order to make things as eye catching as possible? Then we have a feeling you’re going to adore the way Aunt Peaches shows you how to glitter the stems as well so they sparkle in the light. 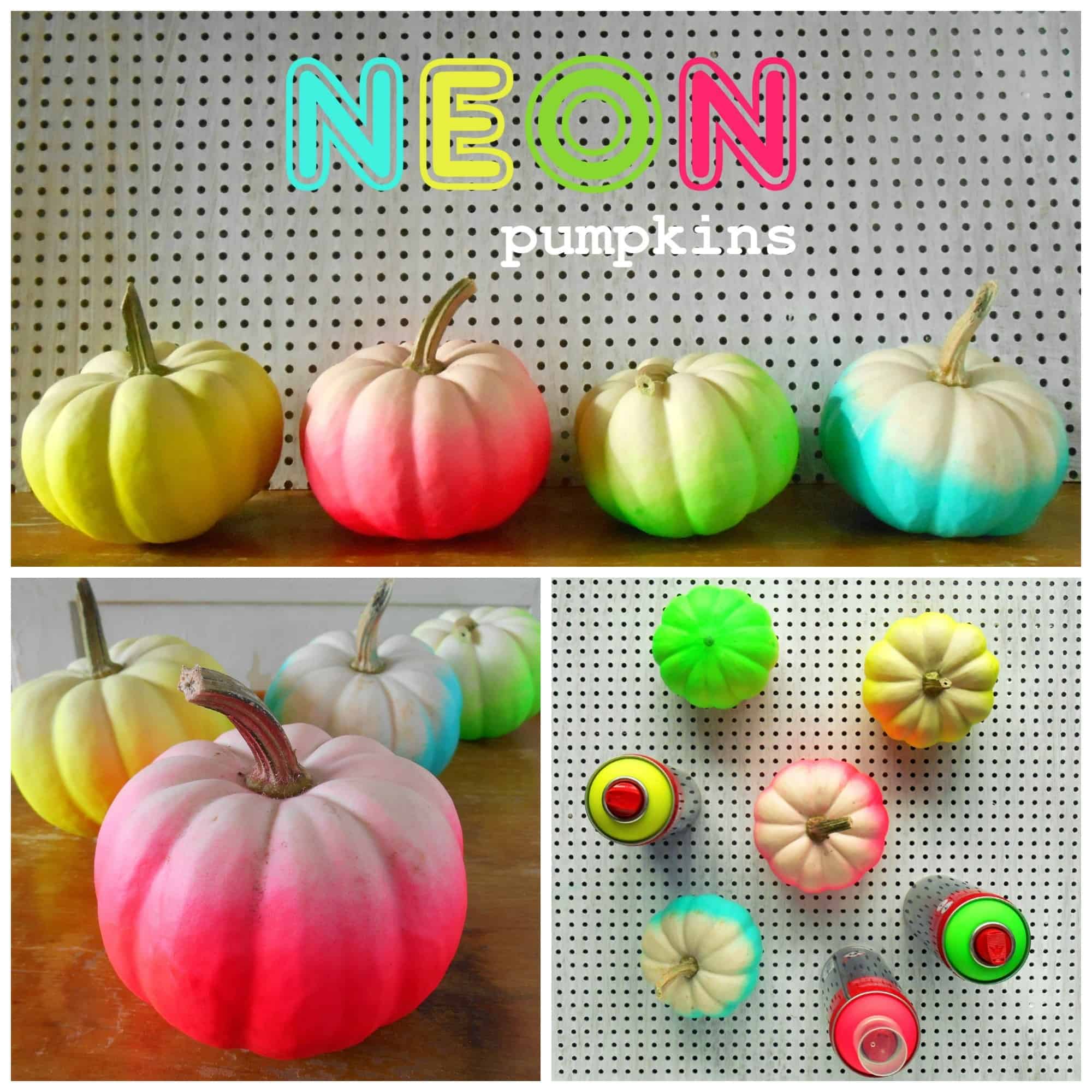 Maybe you are still interested in the idea of brightly painting your mini pumpkins but when you say bright, you really mean bright? Then we’d be willing to bet that something like these awesome fade effect neon spray painted pumpkins outlined step by simple step on Kollabora night be a little more up your alley! 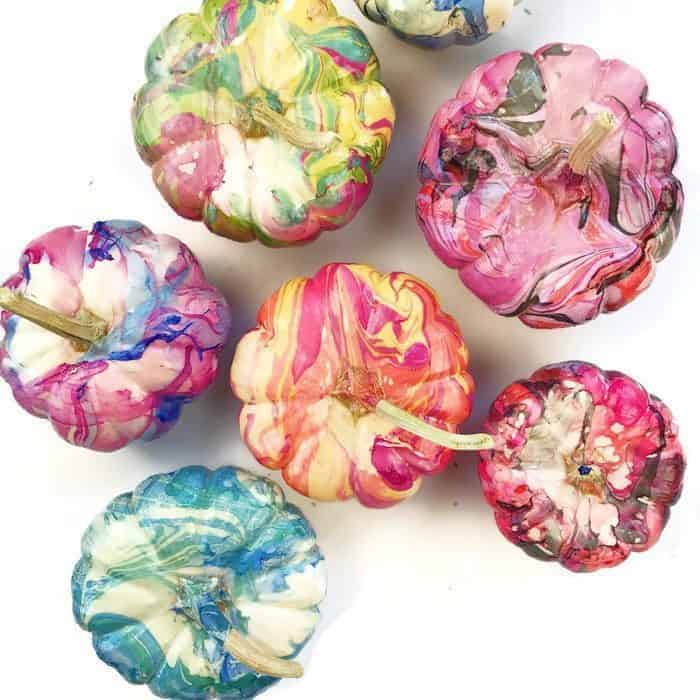 Have we really hit the nail on the head with this whole concept of painting being your favourite craft and therefore painting your mini pumpkins being your favourite concept so far, but you’re still in the market for a technique that’s really awesome looking and that you’ve never tried before? In that case, we’d absolutely suggest taking a look at how Color Made Happy marble painted their pumpkins with all kinds of gorgeous colours for an impressive swirling effect! 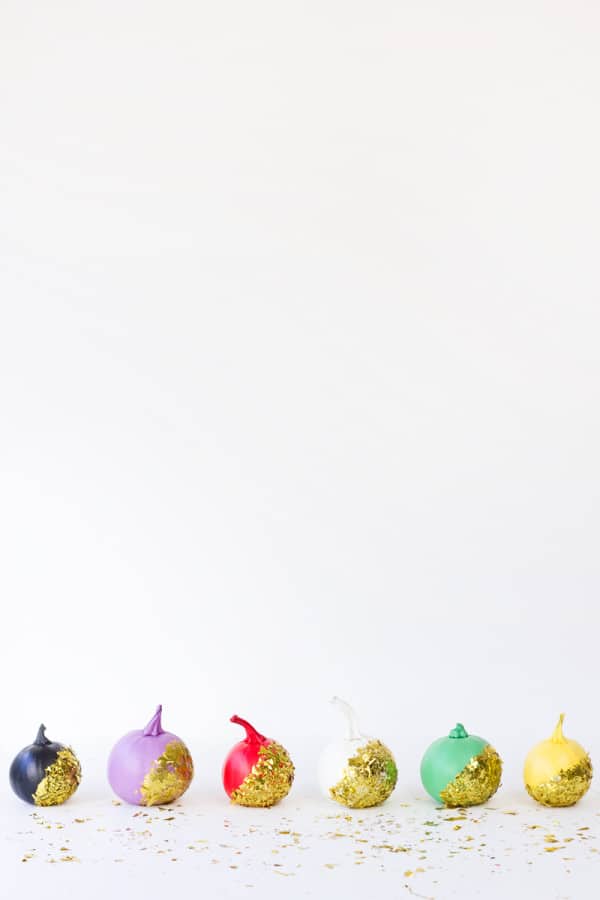 Perhaps you’re still finding yourself scrolling through our list but thinking about how much you adored the look of those very miniature little pumpkins we showed you at the very top of our list, even though you’d like to create something a little more attention grabbing than the tissue paper project we showed you there? In that case, we’d absolutely suggest taking a look at how Studio DIY not only painted their tiny pumpkins bright colours but also dipped them in gold confetti for a little extra shine! 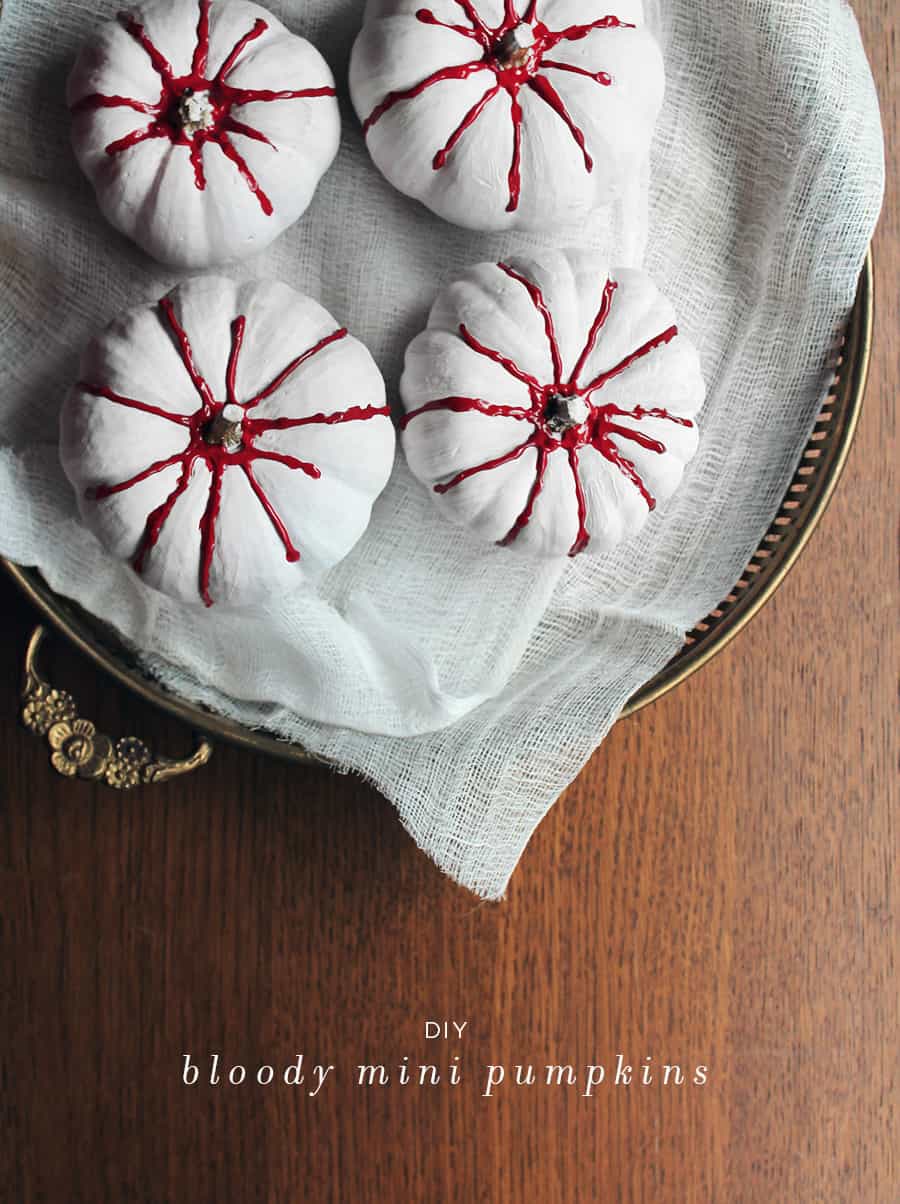 All this time, have you really been scrolling through the options hoping to come across something even spookier than the fanged pumpkins we showed you? Perhaps you’re such a Halloween fan that you’re really in the market for something borderline gory. In that case, we think Almost Makes Perfect might have just the project for you! Take a better look at their tutorial to see how they made these awesome bloody pumpkins! Paint them white for a pristine background and follow their steps for making the red paint look like it’s bubbling up from underneath the stem and dripping its way down the pumpkin’s surface. 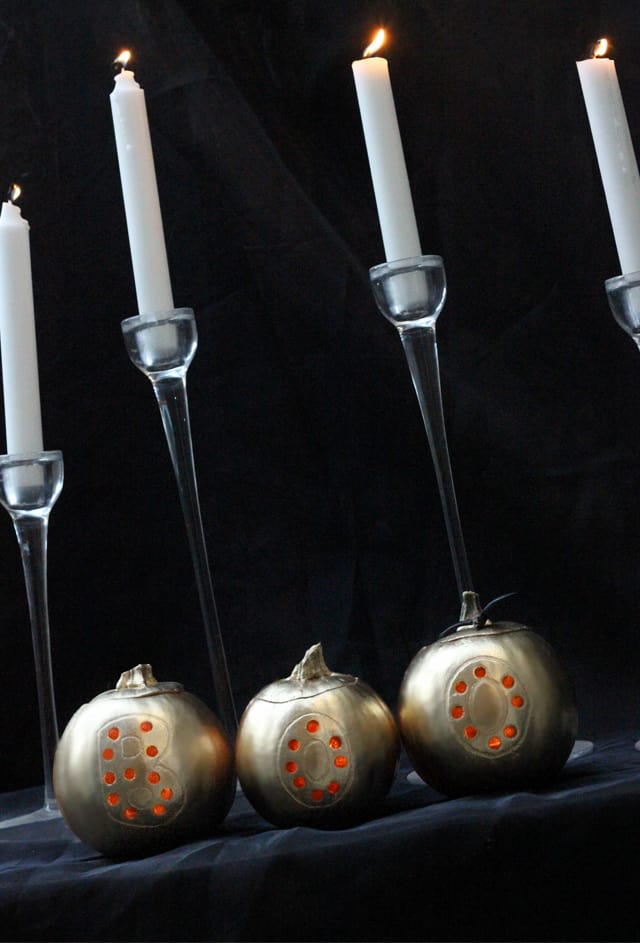 As we mentioned before, just because the pumpkins you’re working with here are very small doesn’t mean you can’t carve them in some capacity! It just means you have to be pretty careful with your space, since you don’t actually have a whole lot to work with. We’d suggest checking out how With Lovely hollowed out their mini pumpkins and then created holes in letter shapes to spell out simple Halloween phrases like “boo”. This tutorial is an especially good idea for you if you enjoy the concept of painting your pumpkins as well! 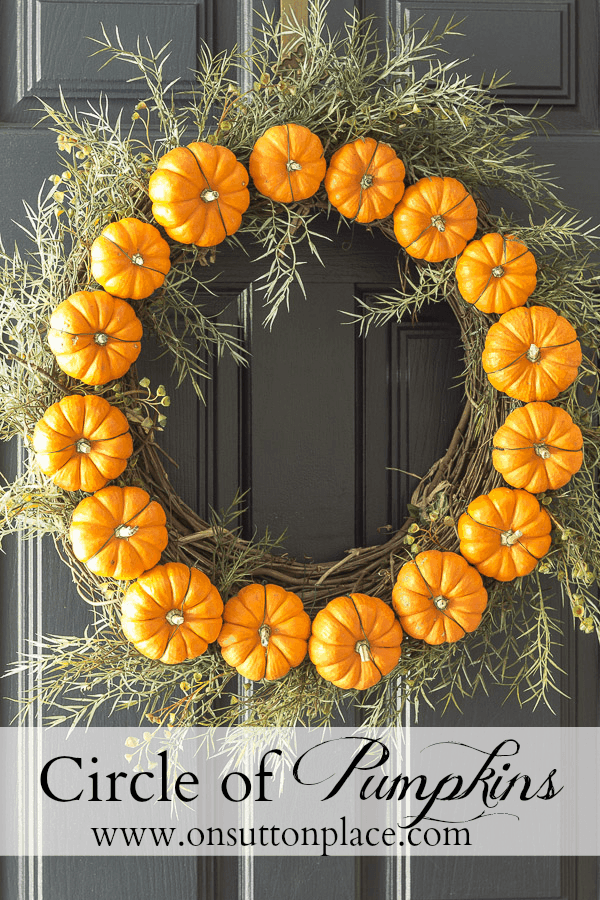 Have you actually been thinking about the fact that, even though think that a lot of these pumpkin altering ideas are really neat, you kind of like the look of them just as they are even better than they’re painted or sparkly? Well, that doesn’t mean you can’t still turn them into an awesome piece! We’d suggest checking out how On Sutton Place made this fantastic circle of pumpkins door wreath that’s the epitome of fall charm. 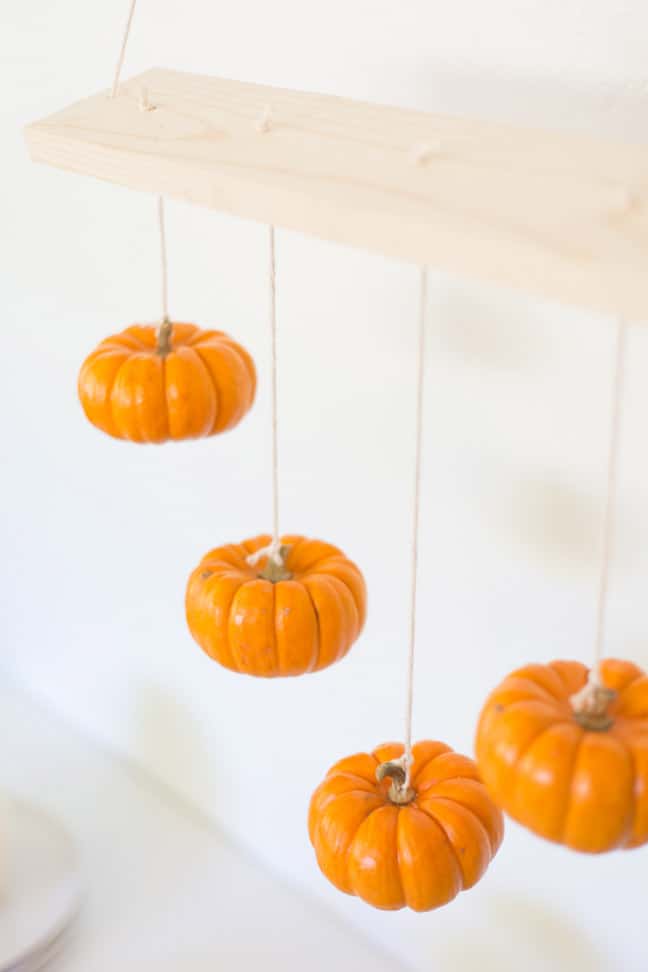 If we’re being honest with you, the idea of making a pumpkin mobile is nothing short of magical. Even if the wooden base is quite rustic looking and you can see the strings holding the pumpkins up, the idea of them floating just really suits the Halloween season! That’s why we loved this design and easy tutorial outlined step by step thanks to Momtastic.

Have you made other kinds of awesome DIY projects and decor pieces before with mini pumpkins but you don’t see anything quite similar to what you did on our list? Tell us all about what you created and how you did it or link us to photos of your finished work in the comments section! 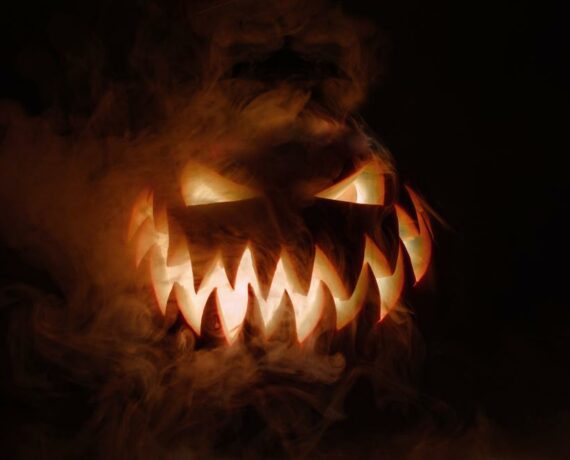 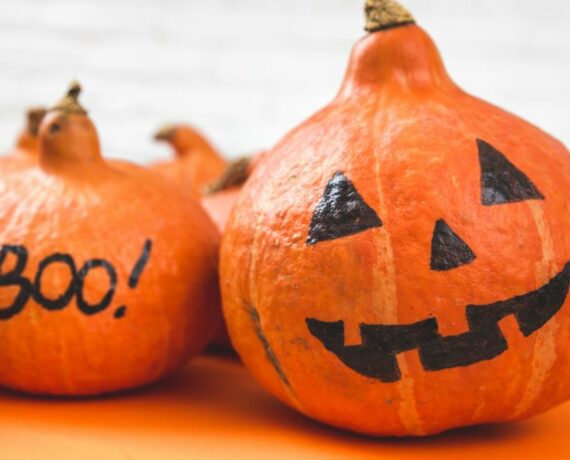 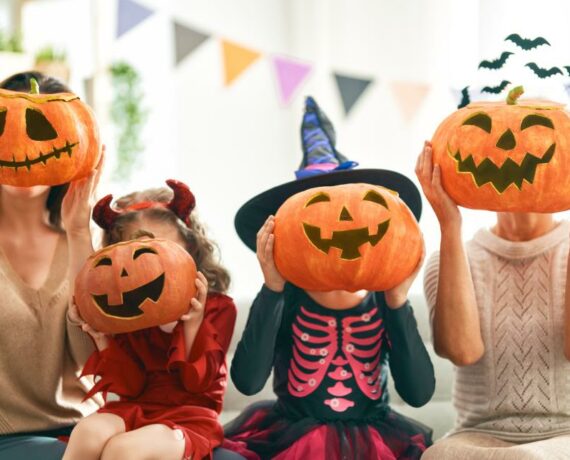 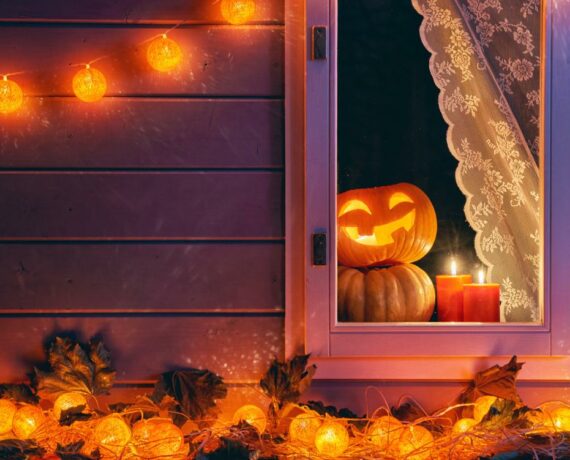 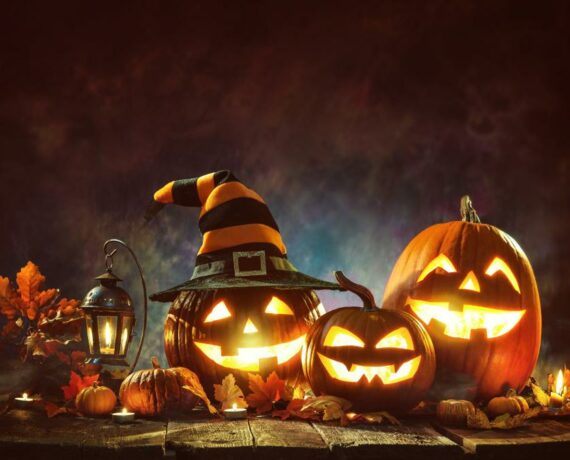 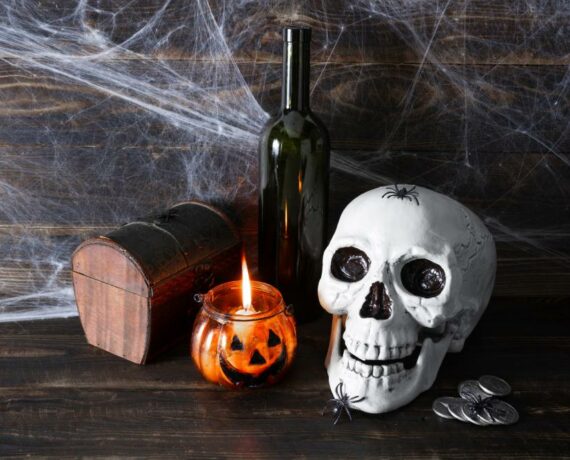 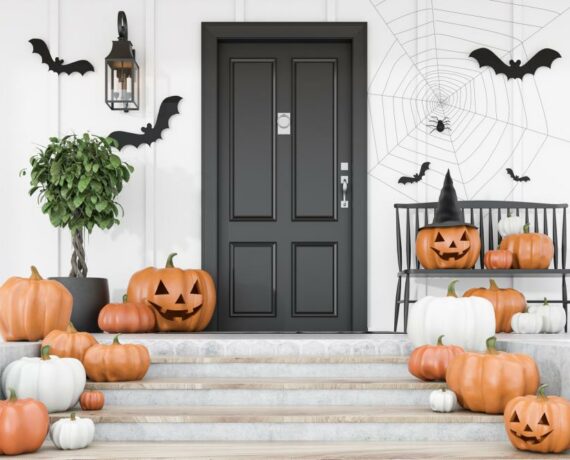 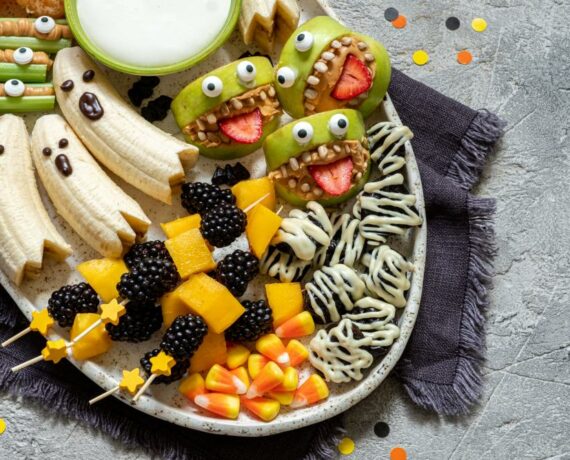