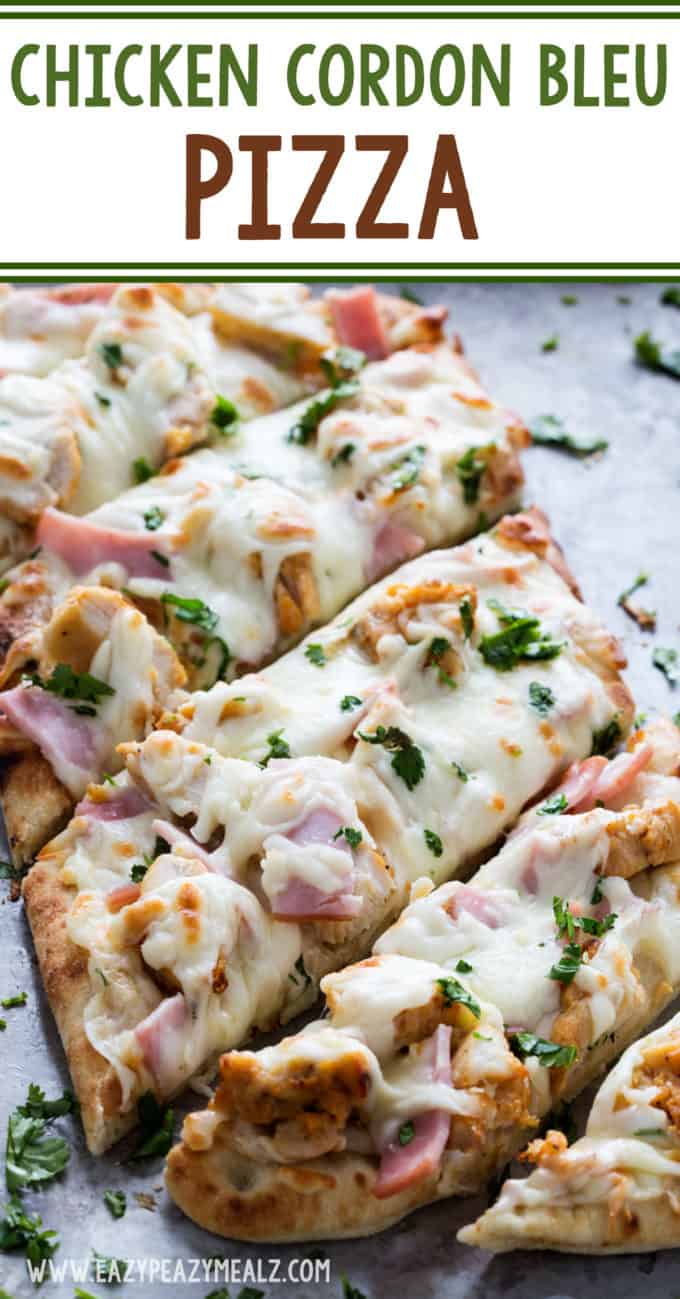 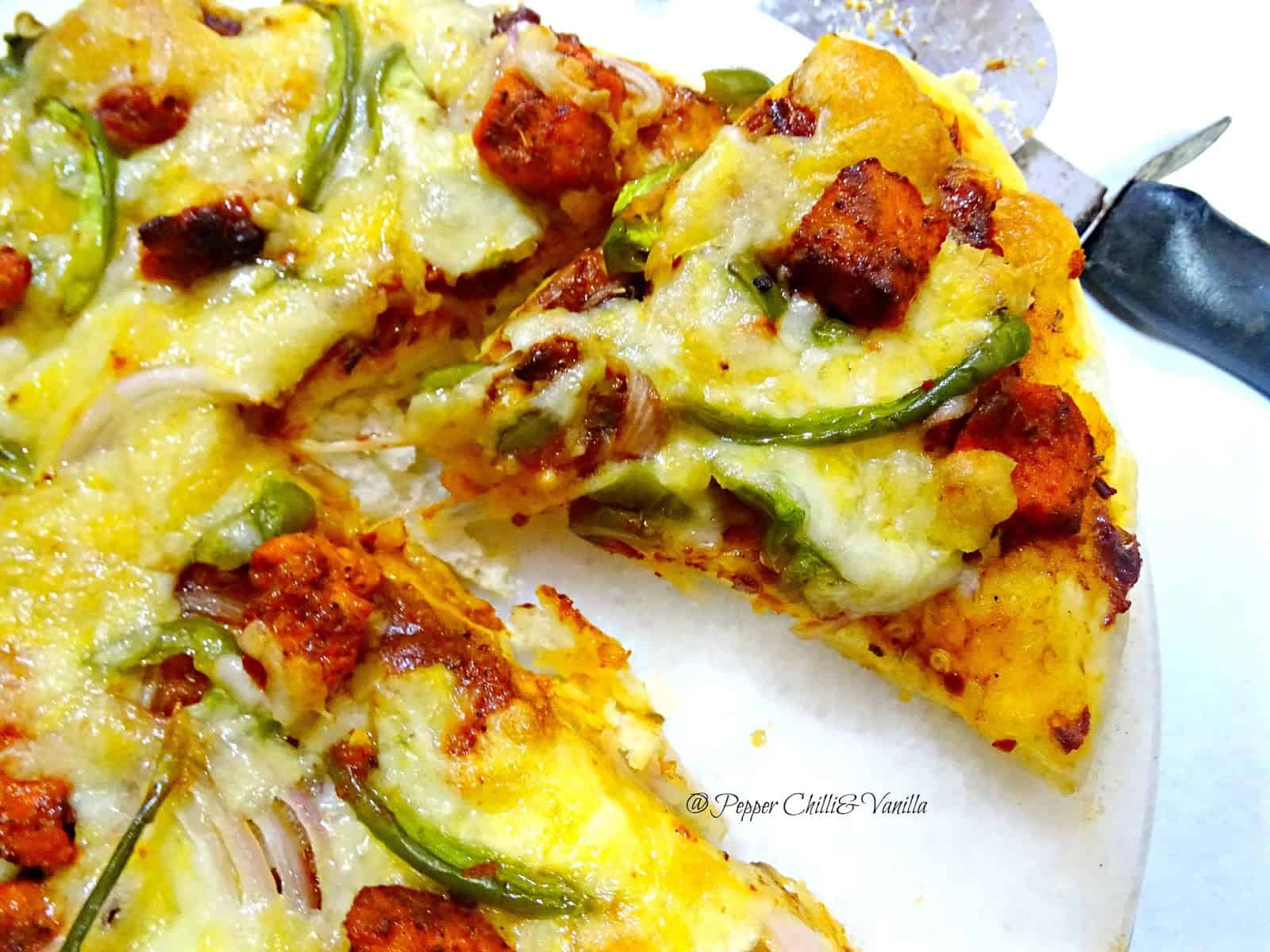 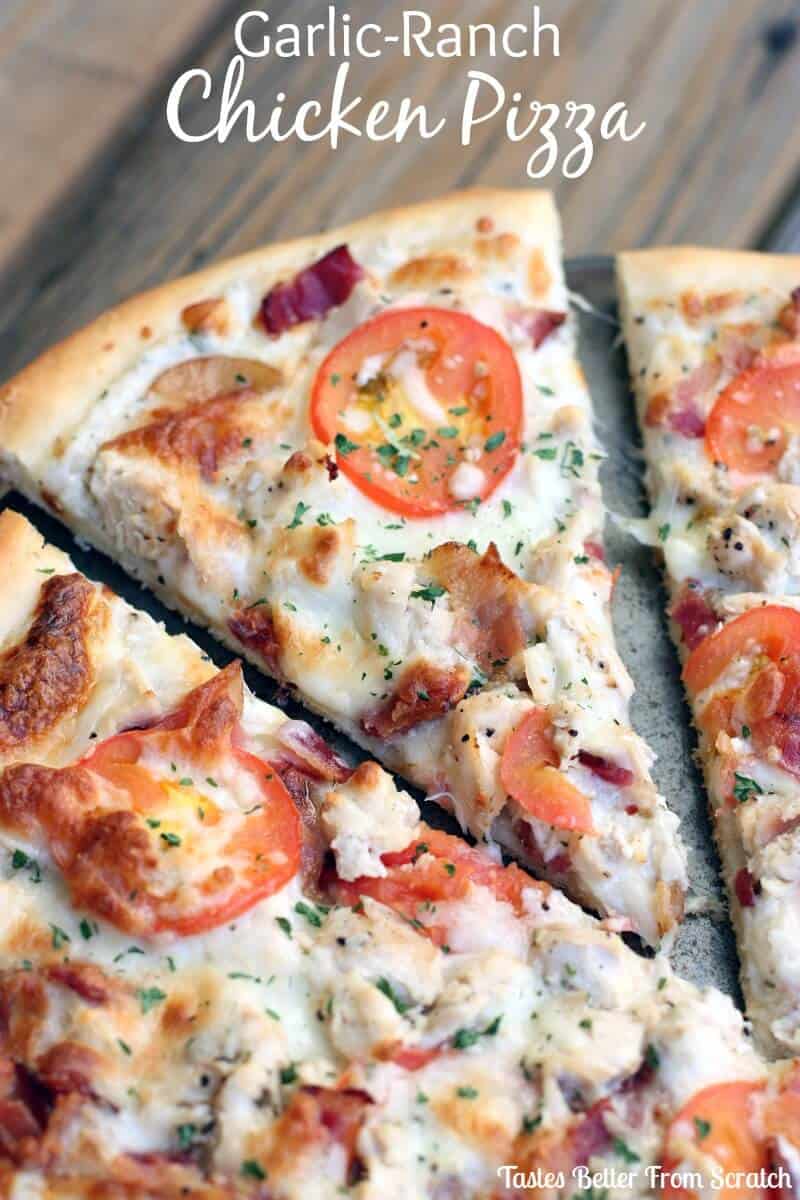 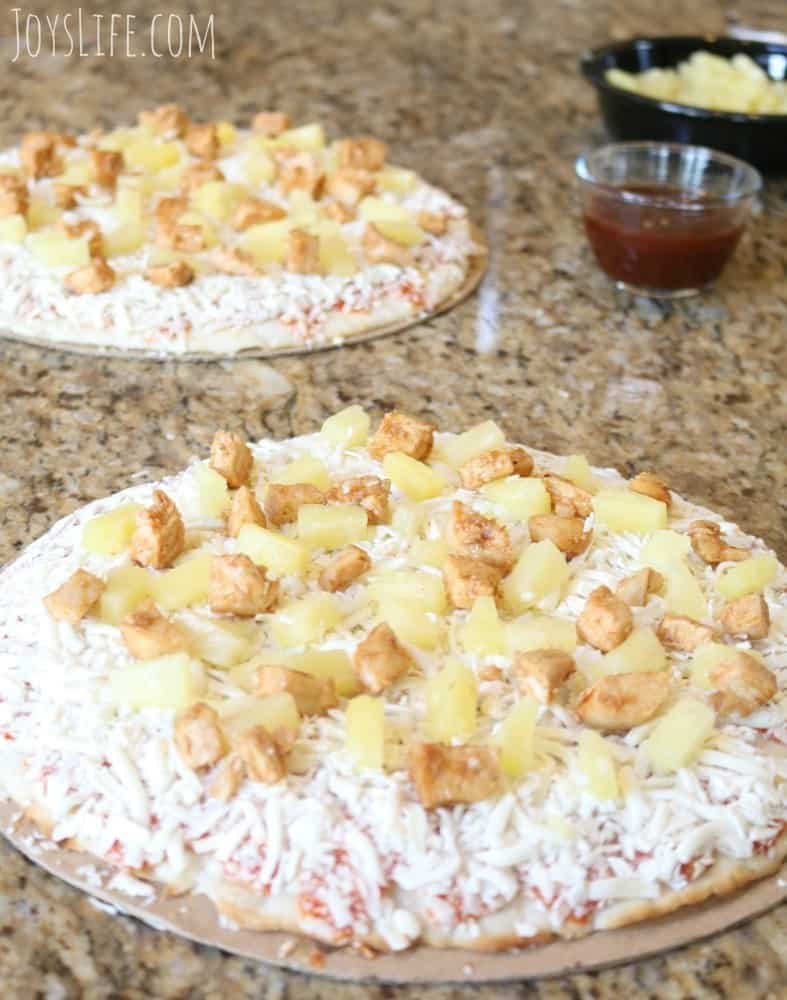 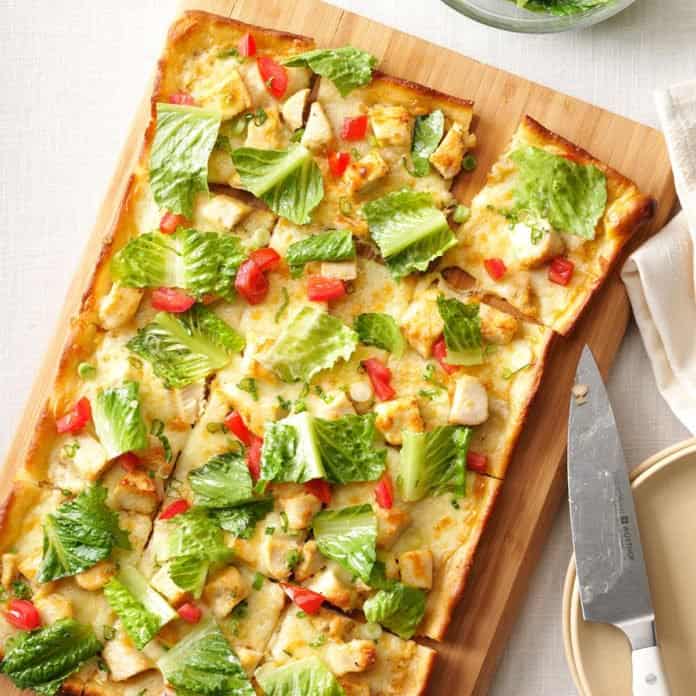 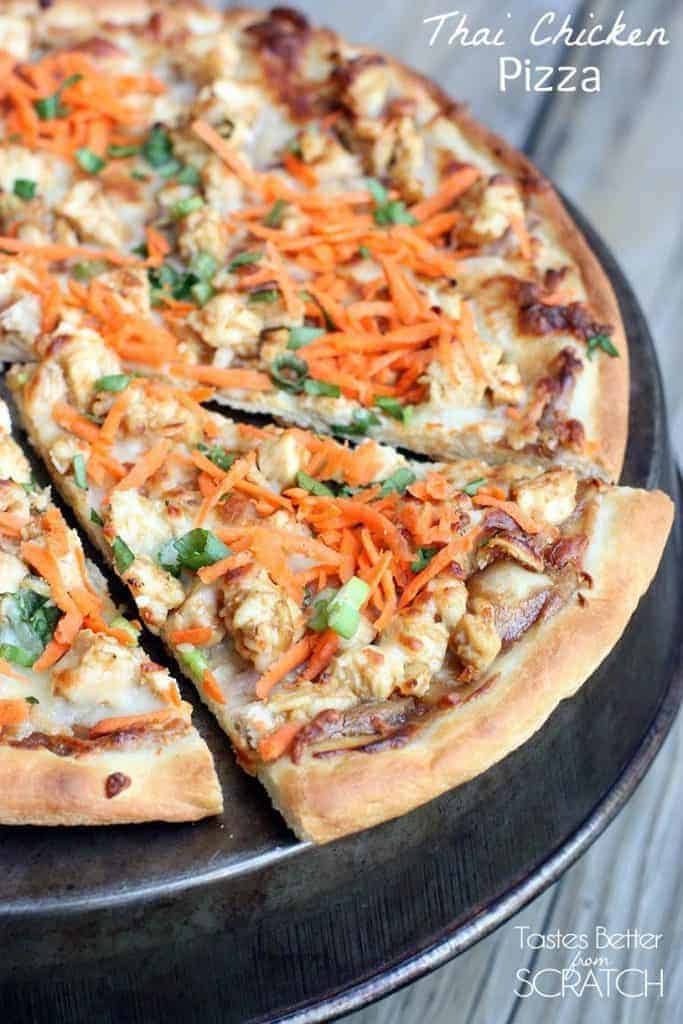 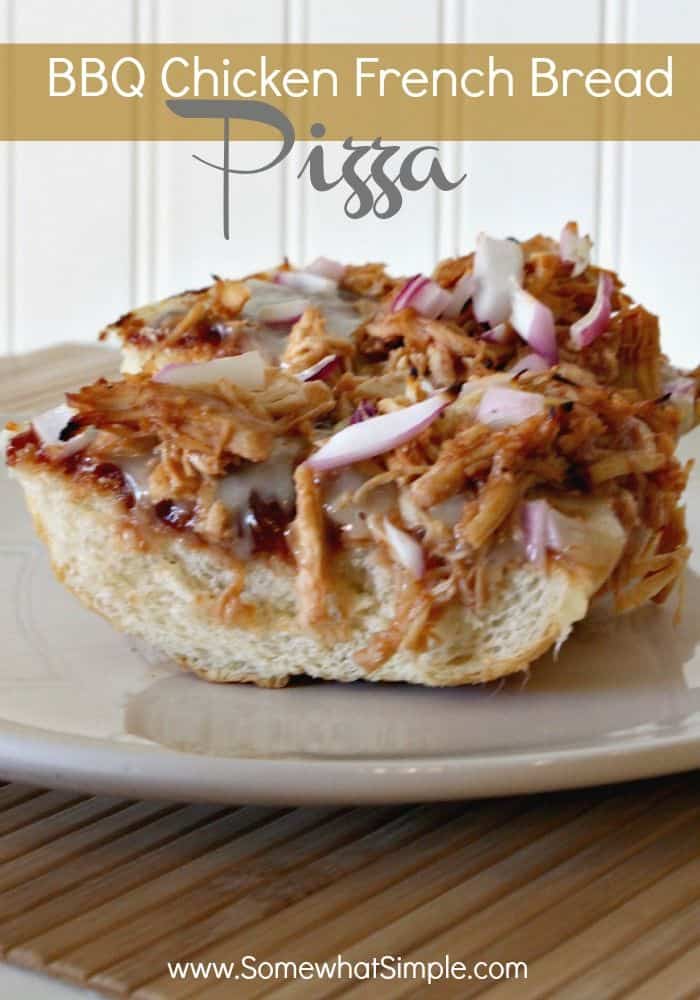 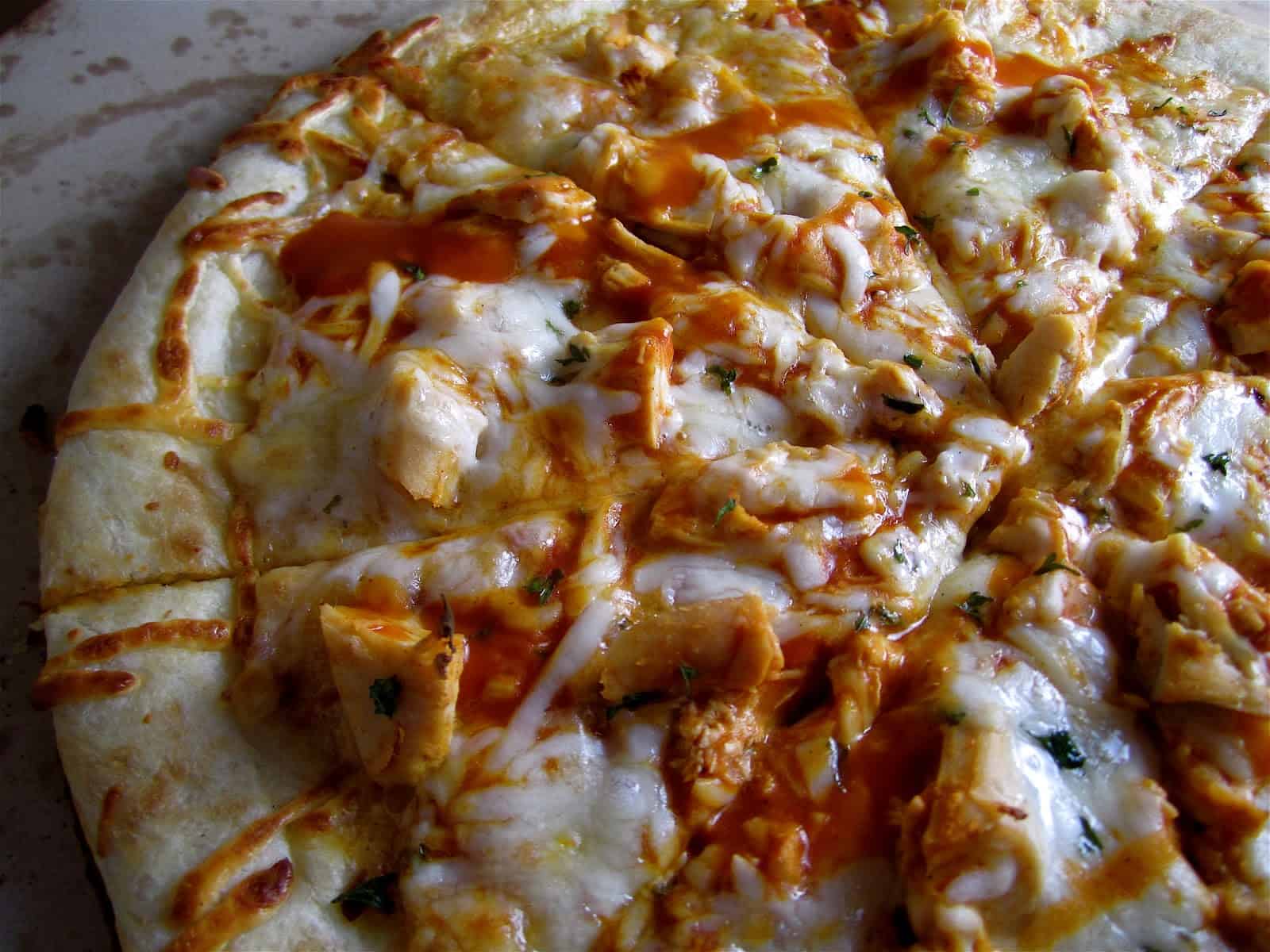 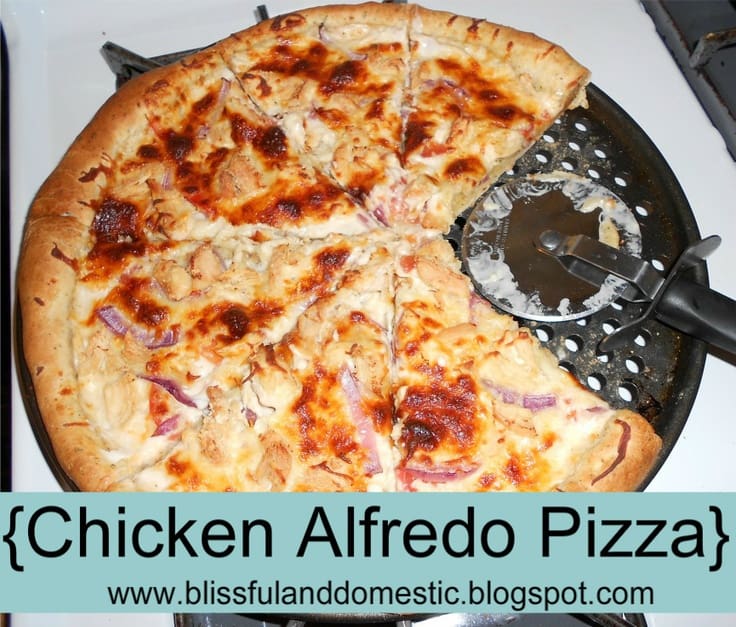 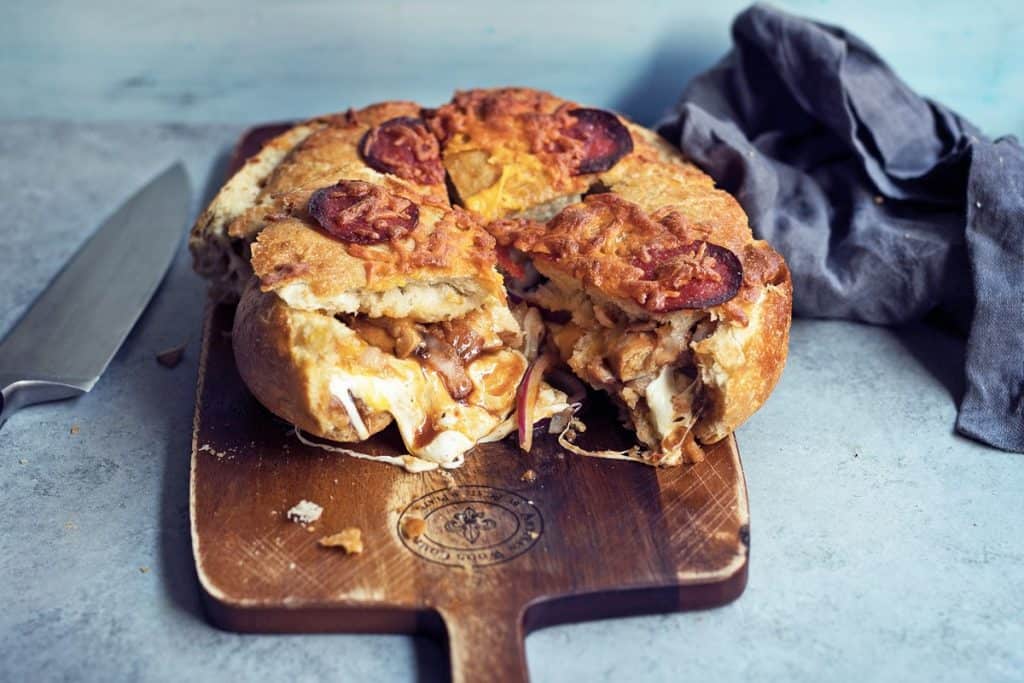 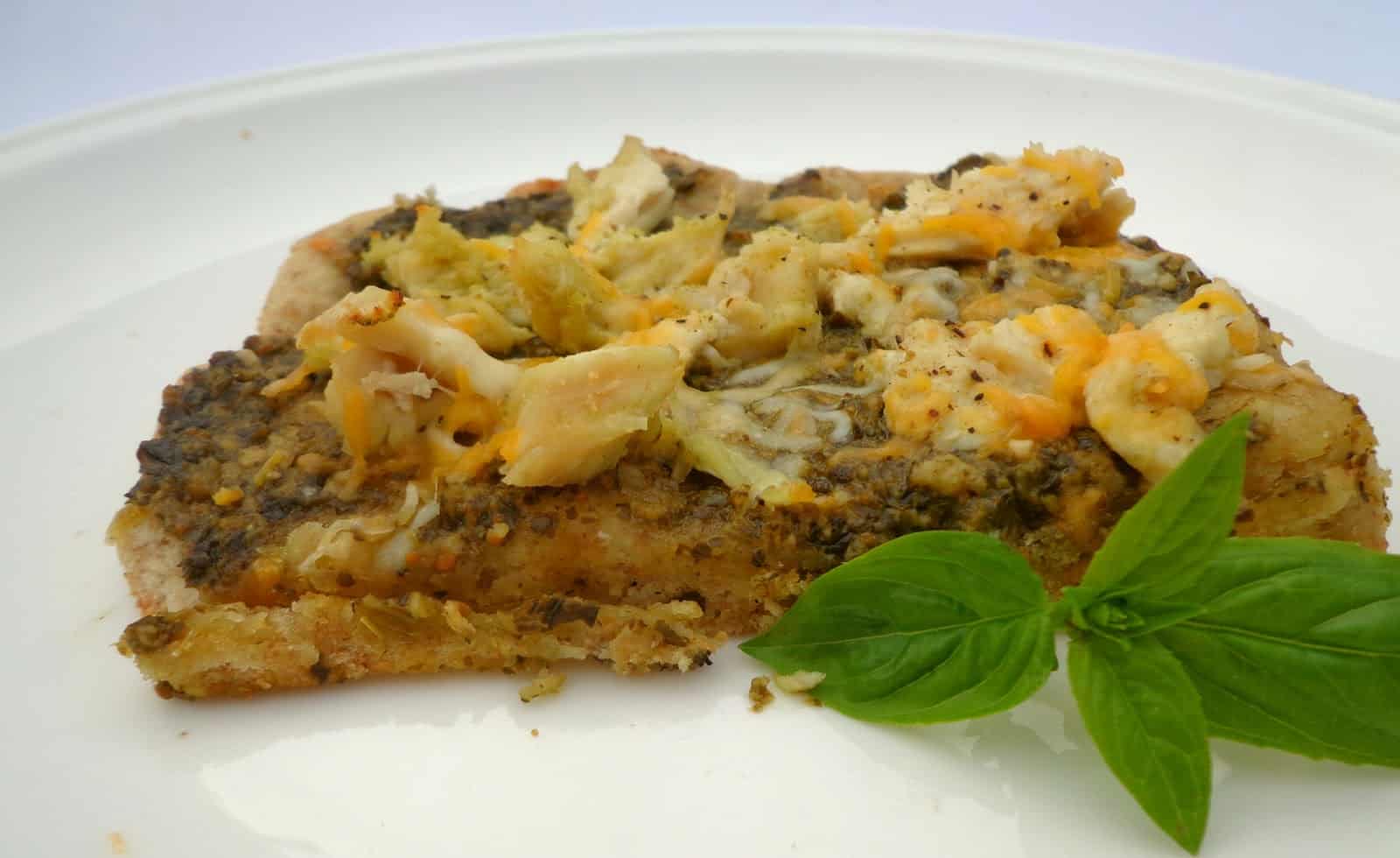 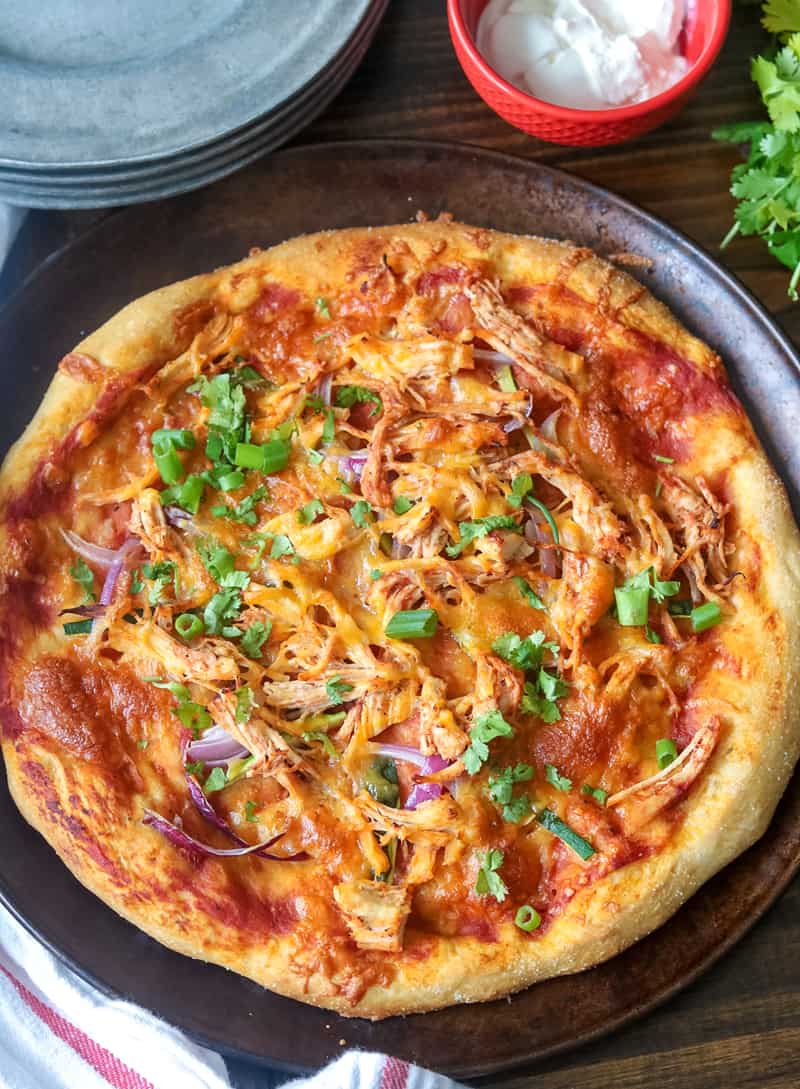 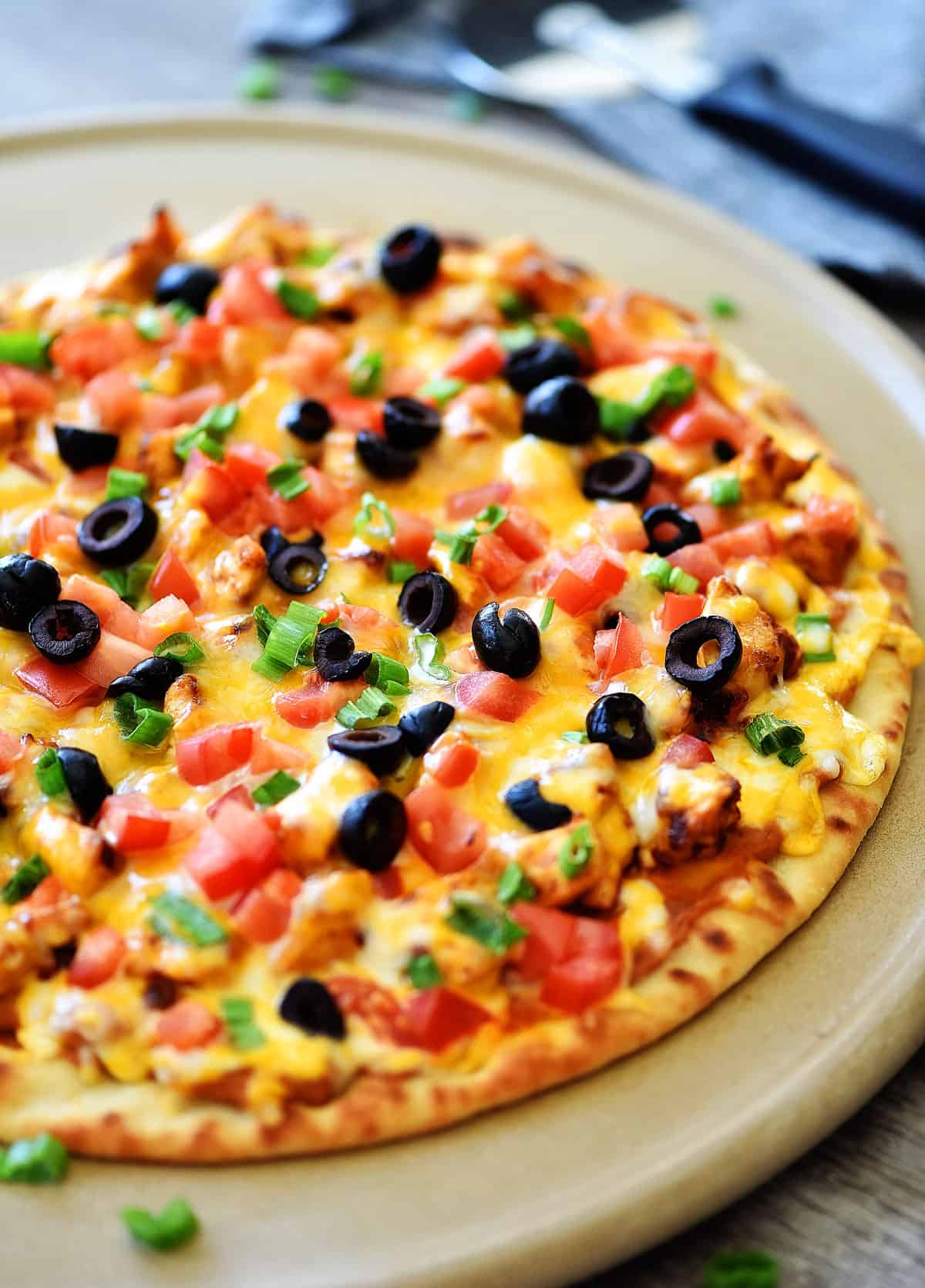 Because we’re such kitchen enthusiasts at home and DIY buffs elsewhere in the house too, we’re known in our friend circles for learning how to make our very own versions of the dishes we fall in love with at restaurants. That’s why absolutely no one was surprised when we found ourselves on a bit of a chicken pizza kick after enjoying one of the best pizzas we’ve ever had during a recent night out! Since then, we’ve had our eyes peeled all across the Internet for as many different versions of that basic idea as we can possibly find and try!

What’s even better than a recipe that helps you combine the delicious flavours of two things you love in one dish,  you ask? Well,  we’d certainly say that a recipe giving you a combination of three awesome things might fall into that category! That’s why we were so excited to stumble across this fantastic chicken taco pizza concept outlined in detail on Life in The Lofthouse.

Did we almost get your attention when we started talking about the concept of awesome tasting taco pizza but you’re convinced that you’d actually enjoy the meal a little more if it were a tad spicier than what you saw above? In that case, we’d definitely suggest taking a look at how A Mind Full Mom made this scrumptious chicken fajita pizza instead! You don’t have it make it too spicy, of course,  but it does have a bit more of a kick for those who want that.

No matter what kind of dish it’s being served in, pesto has always been one of our favourite ingredients to work with. There’s just something about it that adds so much fragrance and flavour to anything it’s put in and we just can’t resist it! That’s why we were so pleased to come across this lovely chicken pesto pizza featured step by step on Simply Southern Mom.

Besides just playing with the flavour and ingredients of your pizza, are you also open to the concept of getting create with the shape and texture of your favourite dish, just to add an even cooler twist to things? Then we’d absolutely suggest taking a look at how KitchMe made this super satisfying barbecue chicken pizza bread bowl in surprisingly few simple steps.

Have you actually found yourself still scrolling through our list and thinking about what we said when it comes to the idea of making one recipe that also tastes like another? Well, if you’ve ever been a big pasta fan in addition to how much you love pizza, then we think you simply must take a look at the way Blissful and Domestic made this pizza that tastes just like creamy chicken Alfredo!

Were you quite intrigued indeed by the barbecue chicken pizza bowel we showed you earlier but you think you’d rather concentrate less on the shape or texture of your pizza and more on adding a but of a kick to the flavour instead? Then we have a feeling you’re going to love the way Stacey’s Recipes Cooking Tips made this super flavourful Buffalo chicken pizza!

Maybe you’re actually so intrigued by the pizza bowl idea that you’re scrolling through our list now and finding yourself wondering what other kinds of alternatively made pizza and BBQ chicken bread dishes are out there for you to try your hand at making? In that case, we think you simply must take a look at the way Somewhat Simple made this delicious barbecue chicken French bread pizza that smells just as good as it tastes.

If you’re going to start getting creative with the flavour of the chicken you’re putting on your unique homemade pizzas, why not get a bit more international with your recipe ideas? Our favourite kind of food to order in with our family (besides pizza, of course), is Thai food, so we’re sure you can imagine our excitement when we came across this delicious recipe for flavourful Thai chicken pizza, courtesy of Tastes Better from Scratch!

Now, we understand that the idea of trying to combine the flavour of a salad with a pizza might seem like a very strange combination indeed, but we were so intrigued when we saw that this recipe actually, no kidding, involved putting chopped lettuce right on top of the cheese that we just couldn’t resist trying it out! We’re very pleased to report back that this chicken Caesar pizza featured on Taste of Home tastes incredible. Even our kids loved it, and they rarely touch salad!

If you’re going to take matters into your own hands and start making your favourite kinds of pizza from scratch, why not put a twist on an old classic, just to amp things up a little? We love the way Joy’s Life did precisely that with Hawaiian pizza, this time making it gluten free as far as the crust is concerned and adding BBQ sauce to the kitchen for even more flavour contrast with the pineapple and cheese.

If you’ve ever dipped any flavour of pizza into ranch sauce, you already know just how delicious the two taste together. That’s . actually one of our favourite ways to enjoy pizza, so we’re sure you can imagine our excitement when we found this garlic ranch chicken pizza recipe outlined step by step on Tastes Better From Scratch! I Heart Nap Time

Maybe you’re actually in a bit of a hurry to get the kids to all of their sports practices after work and school but you did promise them a delicious chicken pizza for dinner, so now you need a recipe that’s a little quicker to make than some of the ones you’ve seen so far? In that case, we think you’ll really appreciate the way Food Minute made their super easy chicken pizza in just a few minutes by using a pita as the base.

Are you still thinking about the concept of getting international with your flavours when it comes to choosing a new chicken pizza recipe, just like we mentioned above? Well, the Thai recipe is certainly good, but who says you have to stop there? Just in case you love Indian food too, here’s a great tutorial from Pepper, Chilli, and Vanilla that teaches you . how to make tandoori chicken pizza in a surprisingly simple way.

We’ve mentioned ranch already on this list, but we know that sometimes people prefer to simplify things and only enjoy a couple of flavours, rather than quite so many at once. That’s why we wanted to include this easy chicken ranch pizza version of the idea from Sargento, just in case you’d rather skip the garlic!

Are you actually still feeling rather intent on the idea of combining your newfound love for chicken pizza with just about as many of your other favourite entrees as you can? Then here’s another awesome idea for your consideration! Believe it or not, Easy Peazy Mealz is here to show you how you can make a pizza that tastes just like mouthwatering chicken cordon bleu.

Do you have another favourite chicken based homemade pizza recipe that your family loves but that you don’t see here on out list? Tell us all about how it’s done or link us to the recipe in the comments section so we can all try it out too!

11 Best Pizza Cutters to Use at Home