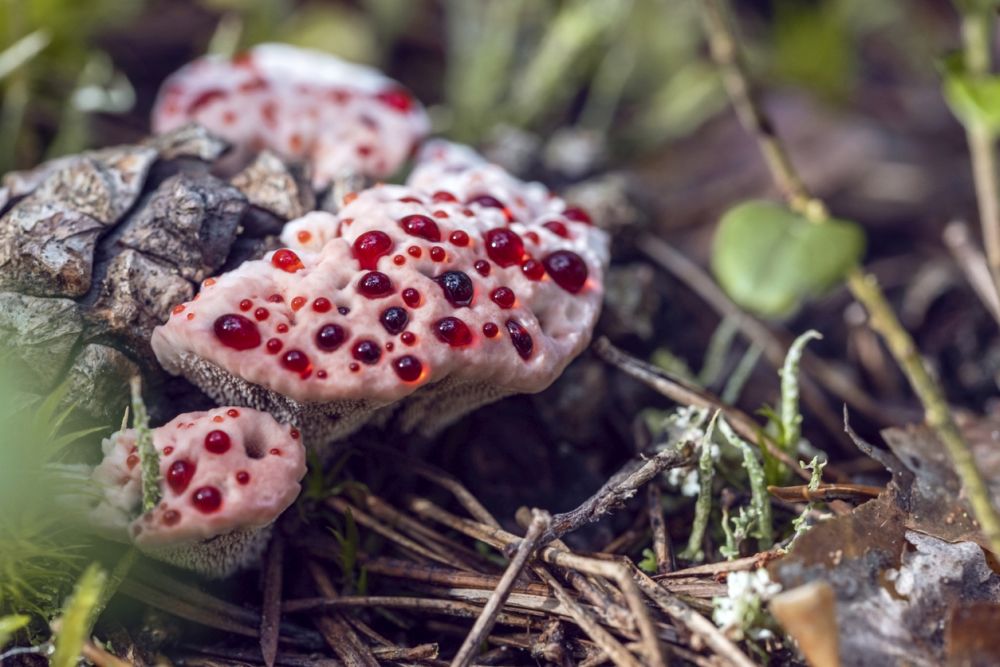 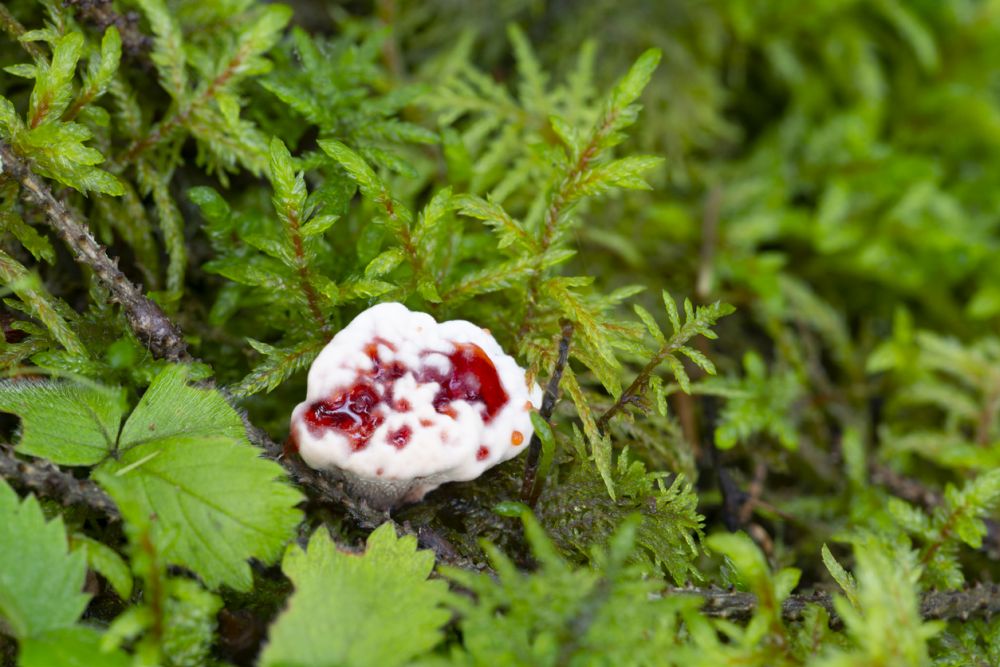 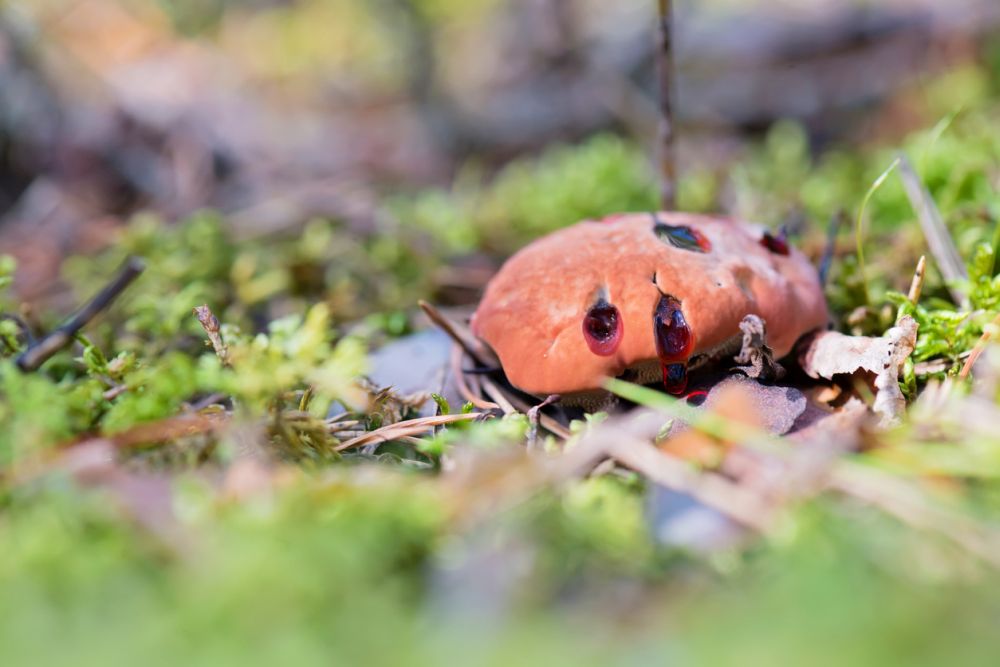 The world of wild mushrooms is full of wonders. Some are innocent-looking but really poisonous if you eat them. Others look very sinister, although they’re perfectly harmless. And then there’s the Hydnellum peckii, or, as is known locally, the bleeding tooth fungus.

It’s not the only name for this bizarre fungus. Some call it the “devil’s toot,h” while others know it under the benign name of “strawberries-and-cream”. We prefer this last name since it aptly describes this unusual fungus without all the melodramatic effects of the outlandish names. So what is the bleeding tooth fungus? What do you need to know about it? And how should you deal with it if you come across it in the forest?

The Truth about Bleeding Tooth Fungus

The bleeding tooth fungus belongs to a family of fungi that are as diverse as one can imagine. However, the one common thing that binds this family together is that all the species have teeth. The teeth are not actual teeth. They’re part of the fungus and are used to produce spores rather than attack.

It’s easy to see why people might confuse the bleeding tooth fungus with a critter from sci-fi movies. It has all the appearances of an animal like a wild predator with all those long teeth and red goo oozing out of it and bubbling under its skin. But since fungi grow the parts above the ground only to make spores and multiply, it’s easy to see why people mistake the spore-producing teeth of the bleeding tooth fungus with a sinister being from horror stories.

So while the part you see on the surface with which resemble bloodied teeth is actually quite harmless, the story under the surface is totally different. Underground, the roots of the fungus spread far and wide in search of nutrients. Most of these nutrients they get from the roots of other plants that happen to be in their vicinity.

That doesn’t mean that the bleeding tooth fungus sucks the nutrients off other plants, far from it. Both plants exist in a symbiotic ‘ectomycorrhizal’ relationship as the fungus gets the nutrients it needs while at the same time breaking the organic matter in the soil for the tree to absorb easily. So as you can see, there’s nothing sinister at all about our fungus.

One of the most distinguishing features of the bleeding tooth fungus, which lent its name to it, is the fact that it has teeth-like protrusions. Most other fungus species have either gills or tubes that they use to develop and spread their spore. In this fungus, these tubes take the shape of teeth. They hang from the caps of the fungus which give it all the appearances of a monster with teeth.

They mainly grow in woodland habitats. They develop a symbiotic relationship with other trees nearby, especially oaks, pines, and birch trees. They produce fruits usually between August and October every year. The fruit usually forms in the soil, not in dead wood,, as is the case with other fungus species.

The fungus prefers loose and sandy soil. So you’ll often find them near banks, in quarries, borrow pits, and on trackside. They don’t grow well in an area covered by other vegetation. This is why they don’t spread in large areas easily. Most often they keep growing in the same are. Their only method of spreading is by moving their roots from one tree to the next, which might take years.

Bleeding tooth fungus also needs a special kind of soil. It has to be well-drained soil, yet with higher than usual humidity levels. This is why they prefer to grow near bodies of water or where the tree branches create an enclosed habitat that prevents ventilation.

Another abnormal characteristic of this fungus is that it doesn’t need nitrogen in the soil to grow and fruit. In fact, the absence of nitrogen helps the fruits appear in abundance. Usually, it’s the old growths of the fungus that bear fruits, although sometimes new fungus might produce small fruits.

Finally, we need to address the elephant in the room. By that, we mean the red, blood-like goo. It’s eerie, to say the least, and if you’re seeing this fungus for the first time, you might be tempted to turn around and run in the opposite direction.

However, there’s no cause for alarm here. Much like the fungus itself, this red goo is nothing more than the sap of the plant. It’s caused most often when the soil becomes soaked with water. The roots absorb the excess water in what is known as osmosis, even though the fungus has no need for that moisture.

The fungus is now distressed with so much pressure inside it from the excess water. One way to handle the pressure is to force the water to the surface of the caps where it gets trapped inside bubbles. But why does it turn red in the process? Well, the answer lies in the belly of the fungus, so to speak.

The internal parts of the bleeding tooth fungus are usually red. The red pigment is just a natural part of the plant and doesn’t indicate that the plant either feeds on blood or that it is poisonous. It’s neither of those. As the water makes its way from the roots to the surface of the fungus, it absorbs the red pigment and turns into that red fluid.

It’s not clear whether this red sap is the reason the fungus often tastes bitter. One thing is clear, though. It’s not toxic, and it’s safe to eat if you can handle its bitterness.

The family of tooth fungus is large and widespread. As we mentioned all the species have teeth, but other than that they differ in their characteristics. Here are the most common species.

How to Deal with Bleeding Tooth Fungus

Many species of the tooth fungus are under conservation. That’s due to the erosion of their habitat and the decline in their fruiting. Other invasive plants such as rhododendron and bracken have made it difficult for the bleeding tooth fungus to survive.

If you come across the fungus, try not to disturb its habitat or move it around since that could be fatal for its survival. You should also protect the bleeding tooth fungus in your area. This includes abstaining from growing humus or other plants that would encroach on the fungus and prevent its growth and fruiting.

While some species of the tooth fungus family are used in cooking, the bleeding tooth fungus is mainly used commercially to make dye and in the pharmaceutical industry. While scientists haven’t revealed the full truth behind the nature and behavior of the strawberry cream fungus, one thing is for sure, it has anti-bacterial qualities that make it a good candidate in the medicinal world. Thanks to the prevalence of atromentin, a chemical compound that has anti-coagulant capabilities, the bleeding tooth fungus has come a full circle to actually have benefits to the blood circulation in the human body. Rather than suck your blood, it actually helps to prevent clots forming in the human blood vessels.

More recent research has also found thelephoric acid in the flesh of the fungus. It’s another chemical compound that might be used one day to treat Alzheimer’s.