As lifelong seafood lovers, we can say with confidence that there isn’t a single kind of seafood we don’t like. When asked our favourite kind, we really have a hard time answering because we just can’t choose! Even so, we find that we go through phases with different kinds of seafood, where we’ll suddenly find ourselves craving a particular thing and then go on a bit of spree with it, wanting to incorporate it into as many meals as we can and learn how to cook all kinds of new things with it. Our latest obsession of that manner, sparked by an unbelievable meal we had at our favourite restaurant recently, is bay scallops! The flavour was so good that we came home feeling intent on trying out some bay scallop recipes at home. Now we’re keeping our eyes peeled for as many bay scallop recipes as we can possibly get our hands on.

If you’re feeling just as intrigued as we were, if not more, by the idea of learning how to make some new bay scallop recipes at home, check out this list of 15 mouthwatering recipes, tutorials, and flavour combinations that we’ve come across so far in our search! 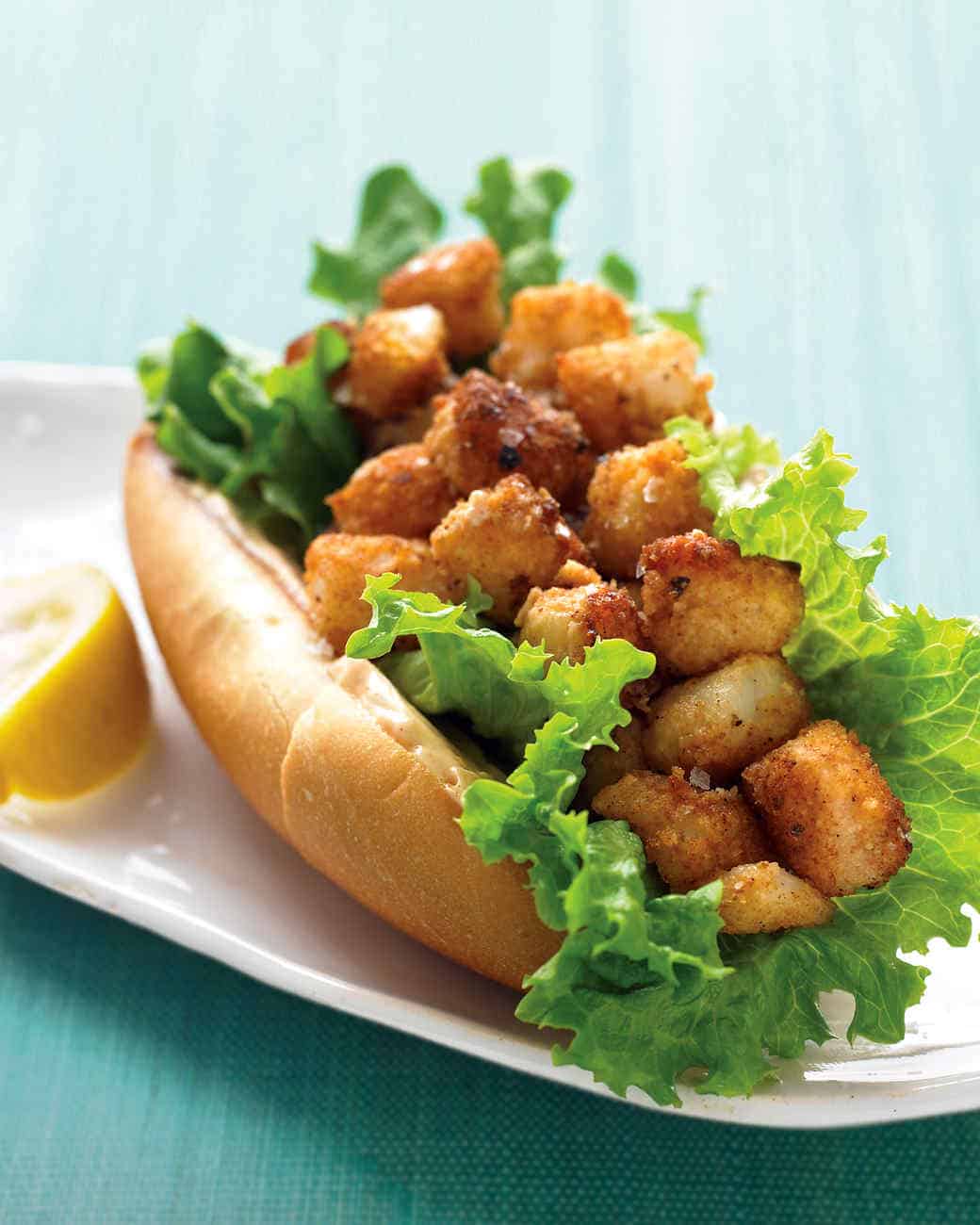 Did you know that you can eat bay scallops on a sandwich? We sure didn’t until very recently but now that we’ve tried it, we literally can’t get enough! This is actually the very meal concept that seemed friendly enough to get our youngest kids trying scallops for the first time and it was a great success, making them willing to try them in other forms, dishes, and preparations too. It’s just that good! Check out the tutorial on Martha Stewart to learn how this bay scallop po’boy with spicy mayo was made. 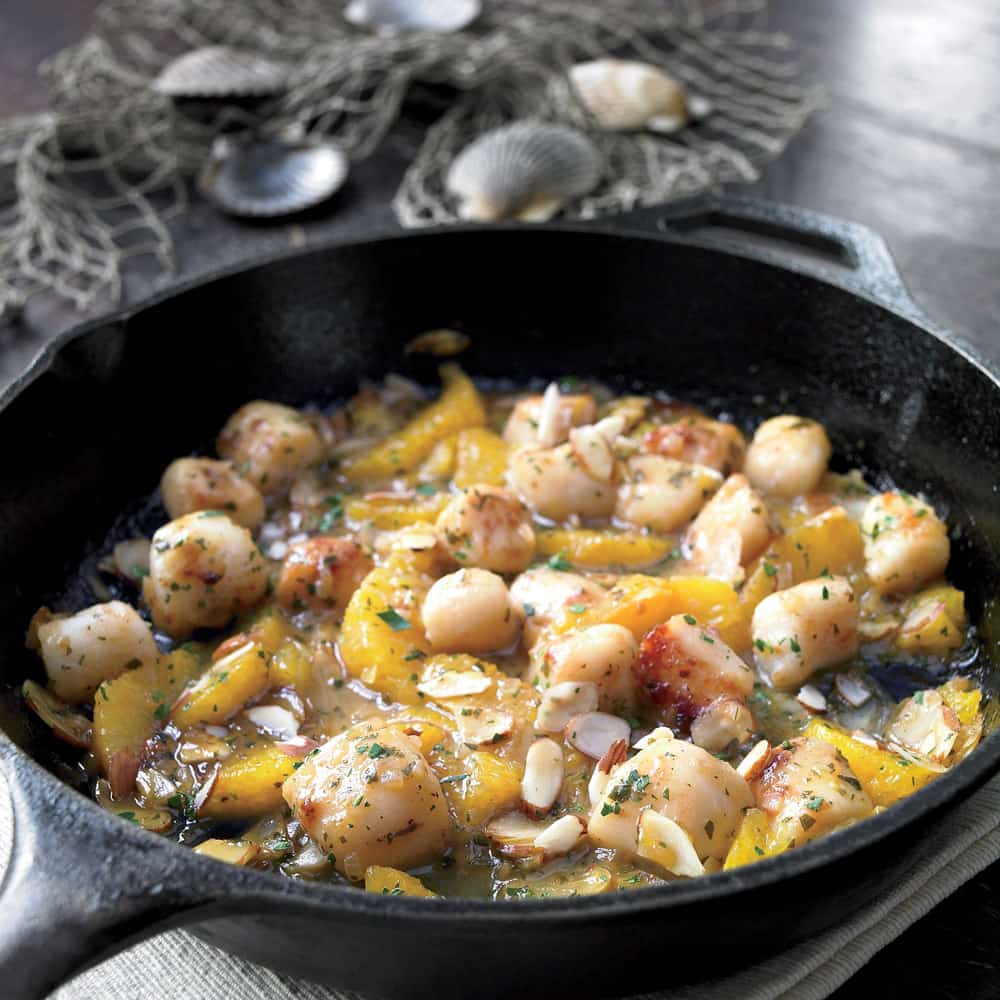 If you’re looking for something a little bit healthier in which you can enjoy your scallops freshly cooked rather than fried, then we’re pretty sure this next idea from New England Today Food will be more along the lines of what you’re looking for, so long as you don’t have any nut allergies! Their recipe outlines the steps for making a uniquely flavourful citrus dish from bay scallops sauteed with almonds and oranges. 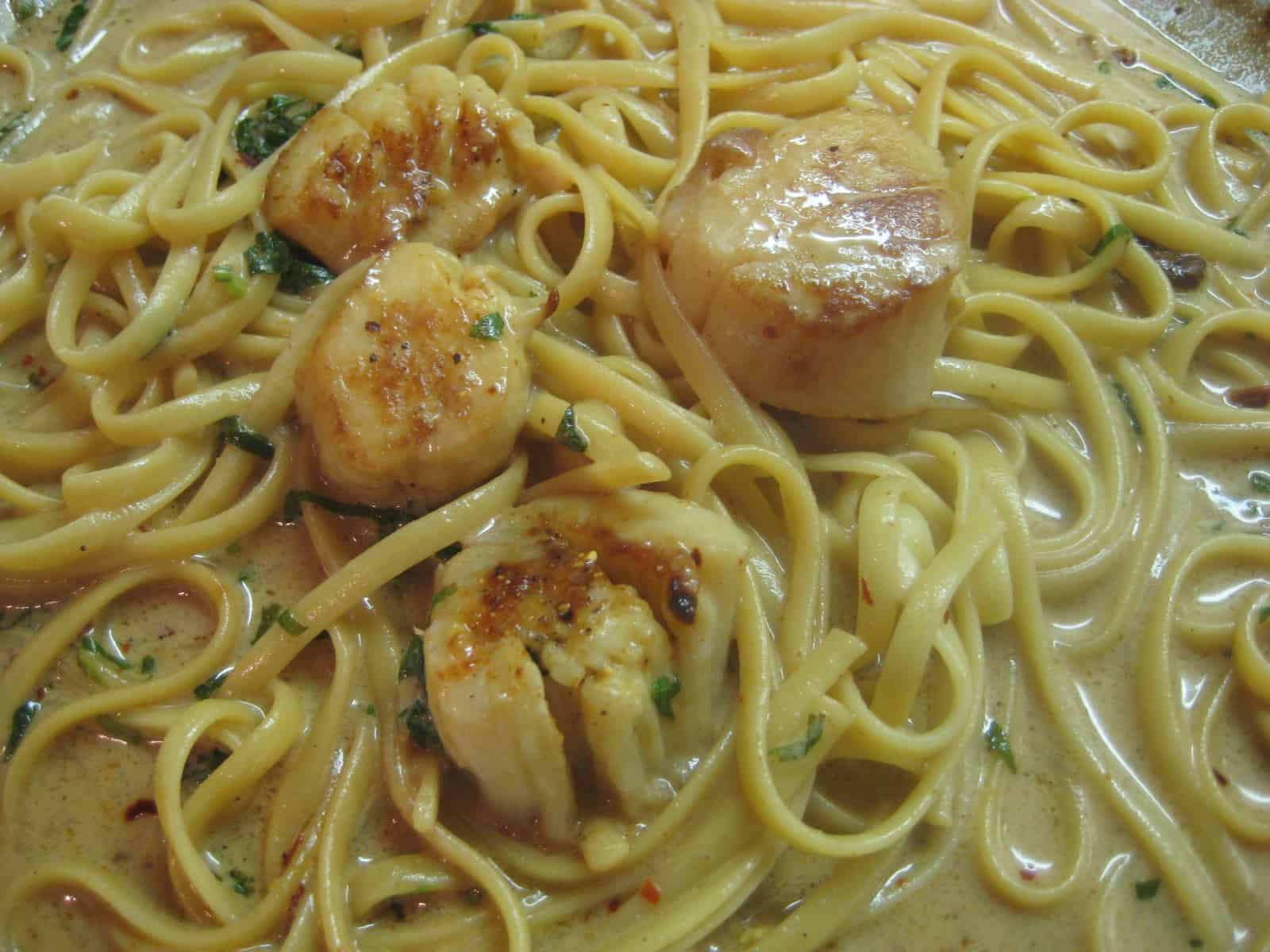 Has your very favourite way to enjoy scallops in restaurants always been in some type of deliciously creamy pasta? Then we think you’ll be rather pleased to learn that there’s nothing stopped you from making that same kind of scrumptious pasta at home! We’ve tried a few different scallop pastas by now but this one from Big Oven for fettuccine with bay scallops might be our favourite so far. 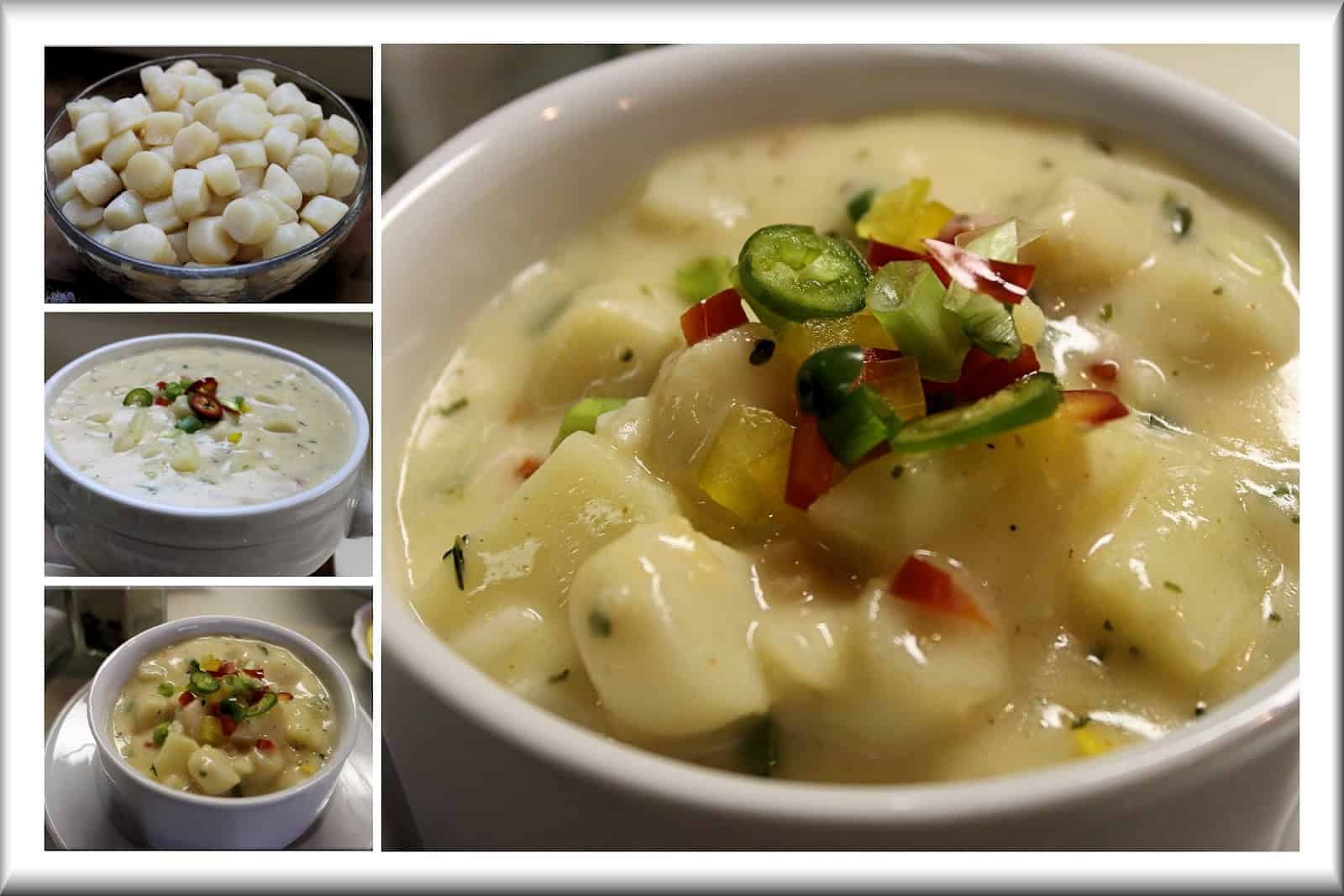 You might have had clam chowder before, as most seafood lovers have, but have you ever tried scallop chowder? If not, then we’d encourage you to fix that right now, because it’s absolutely delicious and not something any seafood lover should ever miss out on. Get started with this simple but fantastic tasting and very creamy recipe for bay scallop chowder outlined in detail on CW’s Cafe Today. 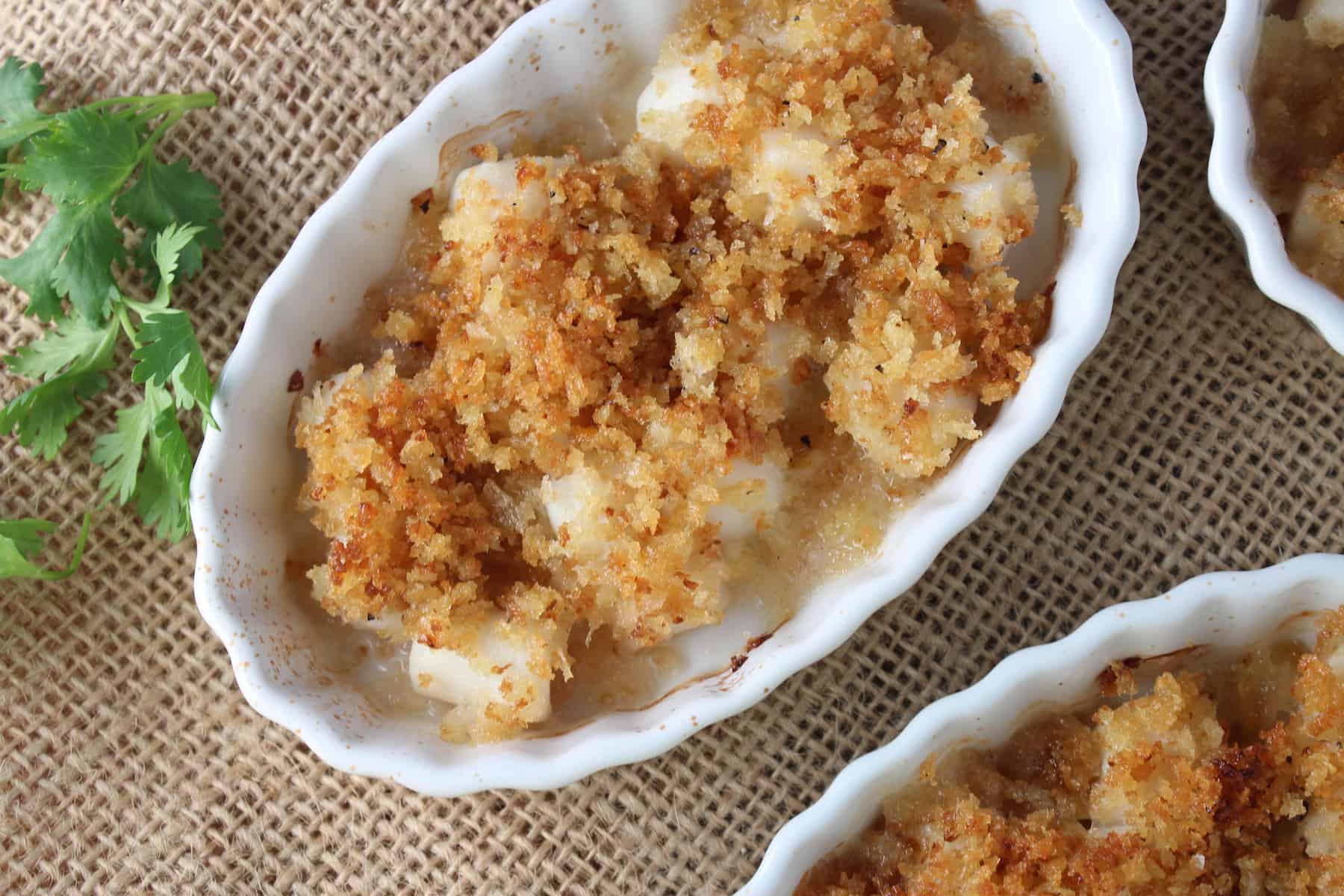 One of our favourite parts about this whole process has definitely been choosing a classic dish that we’ve made plenty of times with other things before and exploring whether or not we can customize it to include scallops instead. When it comes to casseroles, the answer to that was a resounding yes! In fact, we have a new household staple thanks to My Delicious Blog‘s recipe for bay scallop casserole. 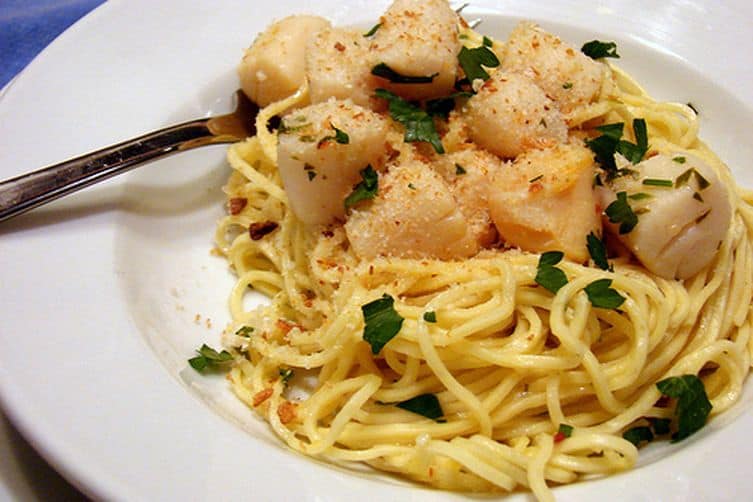 Did we really catch your attention when we started talking about types of scallop based pasta but, even though you’re ramping up how much cooking you do at home, you’re also trying to watch your calories, so you’re just not feeling convinced by the idea of making a thick, creamy fettuccine sauce? Then we’d definitely suggest taking a look at this much lighter capellini with Nantucket bay scallops recipe from Food 52 instead. 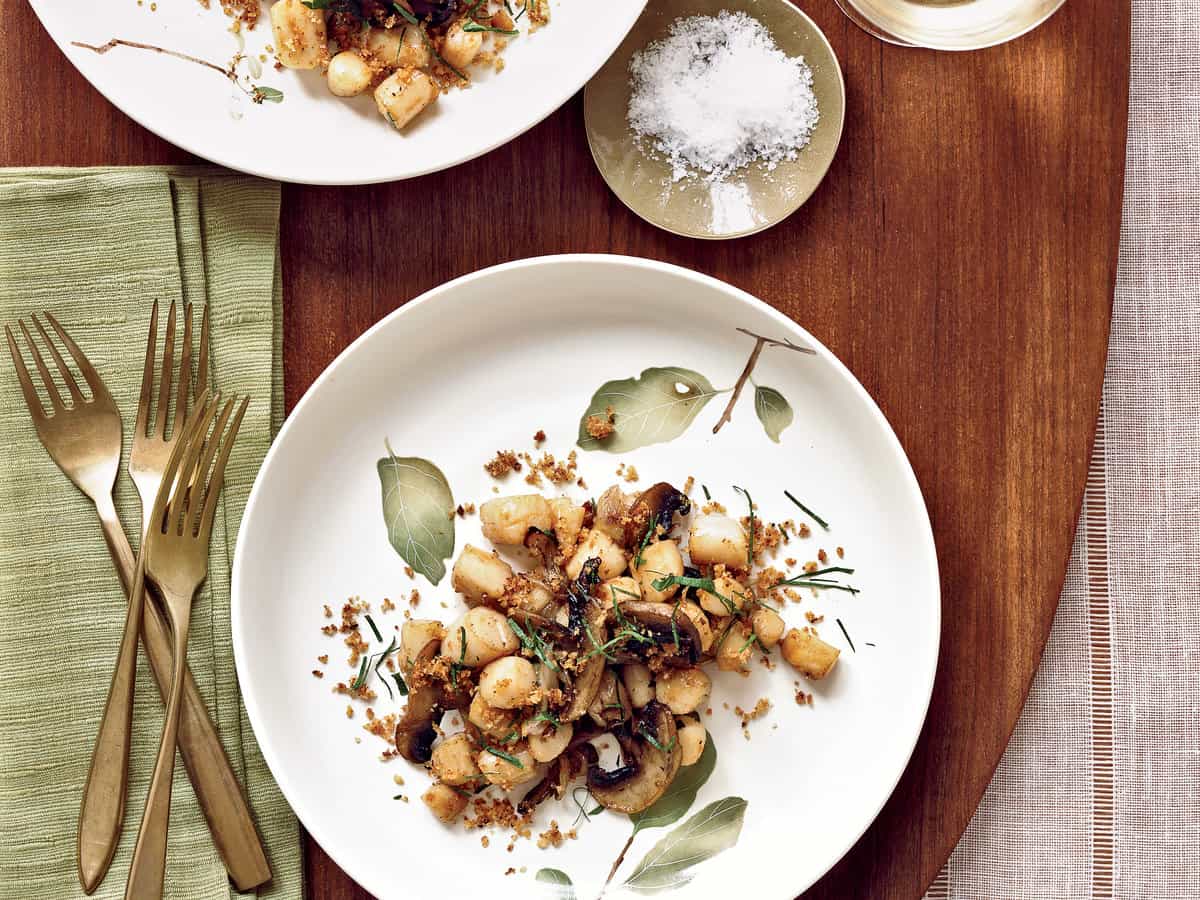 Just in case you’re still thinking a lot about the idea of creating a lighter dish that’s more akin to a stir fry but you weren’t feeling entirely sold on the almond and orange idea, here’s another, differently flavoured but similar concept for your consideration. This full tutorial and recipe from Food & Wine teaches you how to make a bay scallop pan roast that’s got an earthier taste thanks to mushrooms. 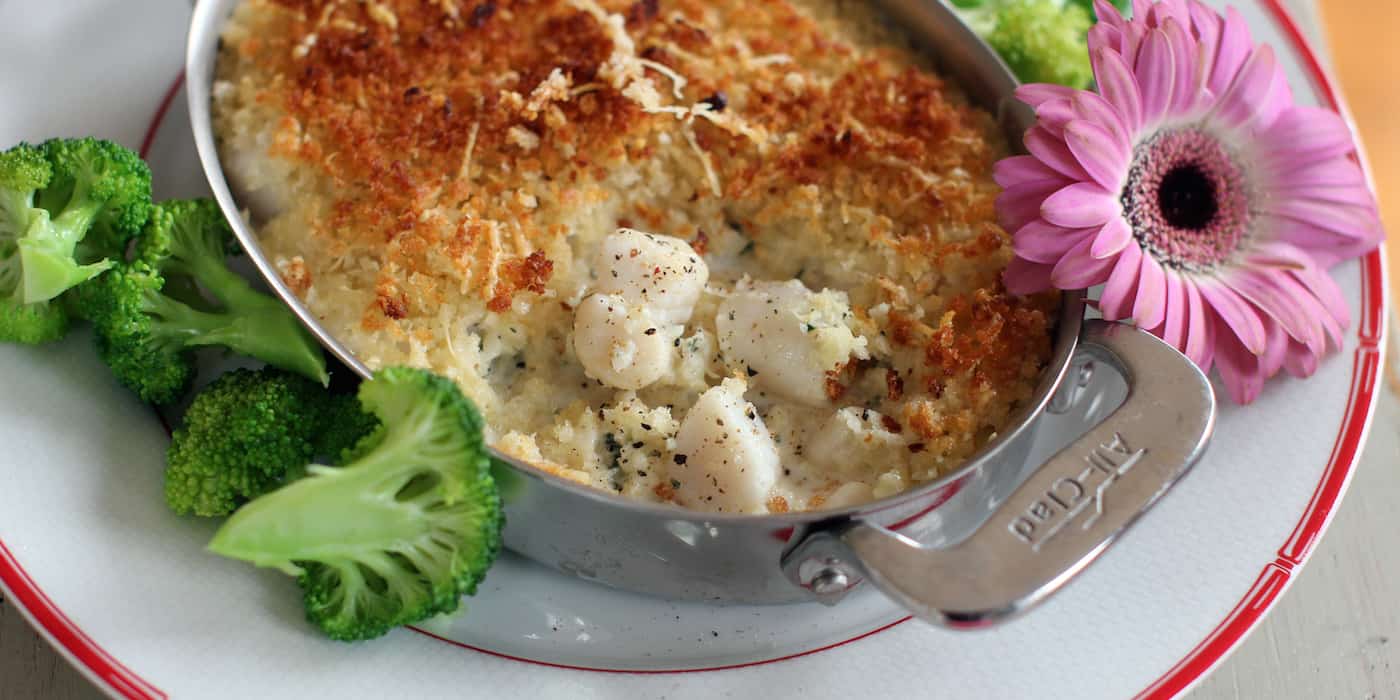 Are you actually feeling a little bit torn somewhere between making a creamy recipe like a pasta and making a hearty homemade casserole but you’re having trouble choosing between the two? Well, who ever said you have to choose? Instead, we’d suggest checking out the way that Oregon Live made this mouthwatering and very satisfying bay scallops dish baked in lemon garlic cream. 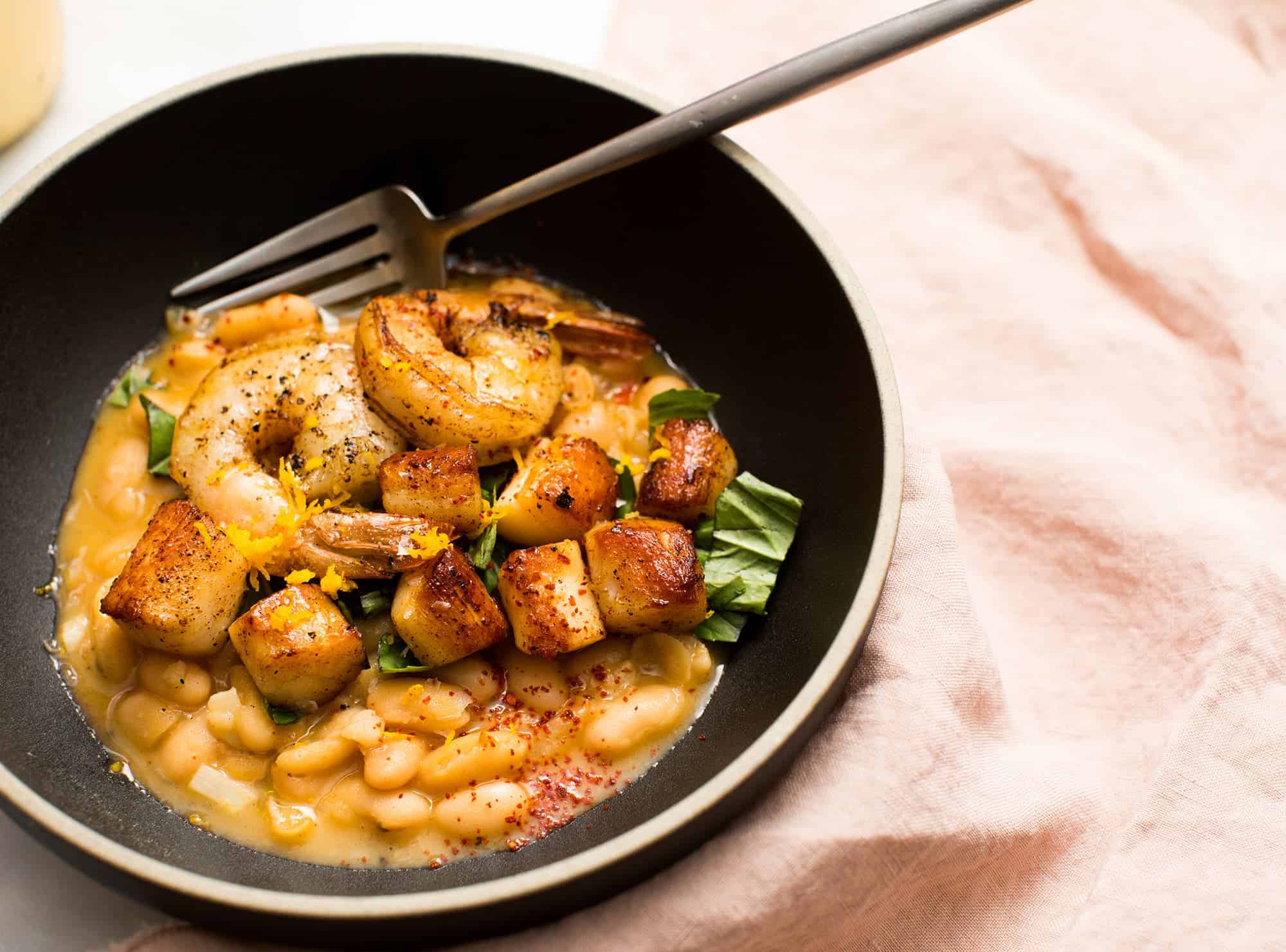 In your opinion, is the best kind of seafood dish always one that involves even more seafood, giving you different kinds in one place? In that case, we’re absolutely convinced that this rich and tasty but very simple shrimp and bay scallops dish featured step by step on Tried & True will be right up your alley! They show you not only how to prepare and cook the shrimp and scallops for perfect texture, but also how to make a sauce that’s creamy without being very heavy. 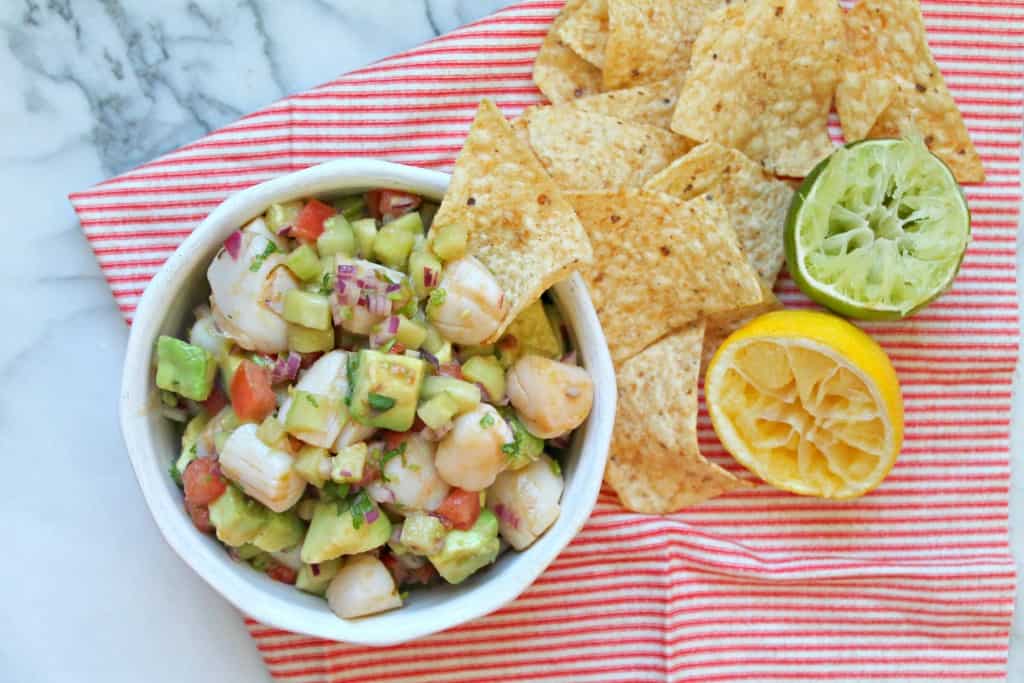 Ceviche is another delicious delicacy that we absolutely believe all seafood lovers should try at least once! The classic version of ceviche is made with finely chopped fish but, for those who prefer scallops over everything, Cooking With Books has an irresistible version that’s mixed with chopped avocado and tomatoes, prepared almost like a guacamole. Check out their page to see how their bay scallop ceviche was made and served with chips!

11. Bay scallops and peas with pesto sauce on rotini 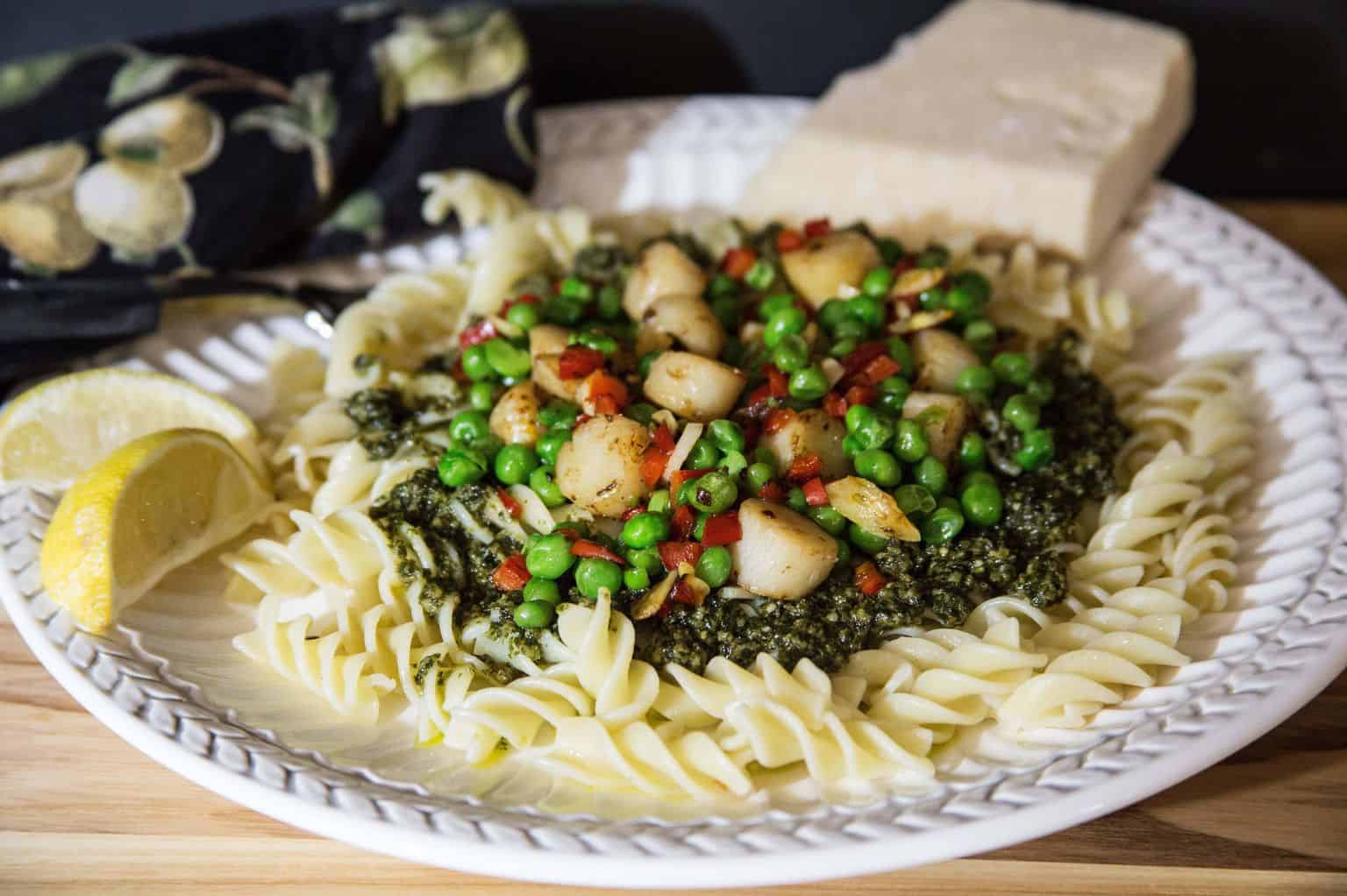 Just in case you’re still not over the scallops and pasta idea but you’re also holding out for one that speaks to you a little more than what you’ve seen so far, here’s another flavour profile for your consideration (without sacrificing the scallops themselves, of course). Food 52 is here to show you how they made bay scallops and peas with pesto sauce served over rotini. 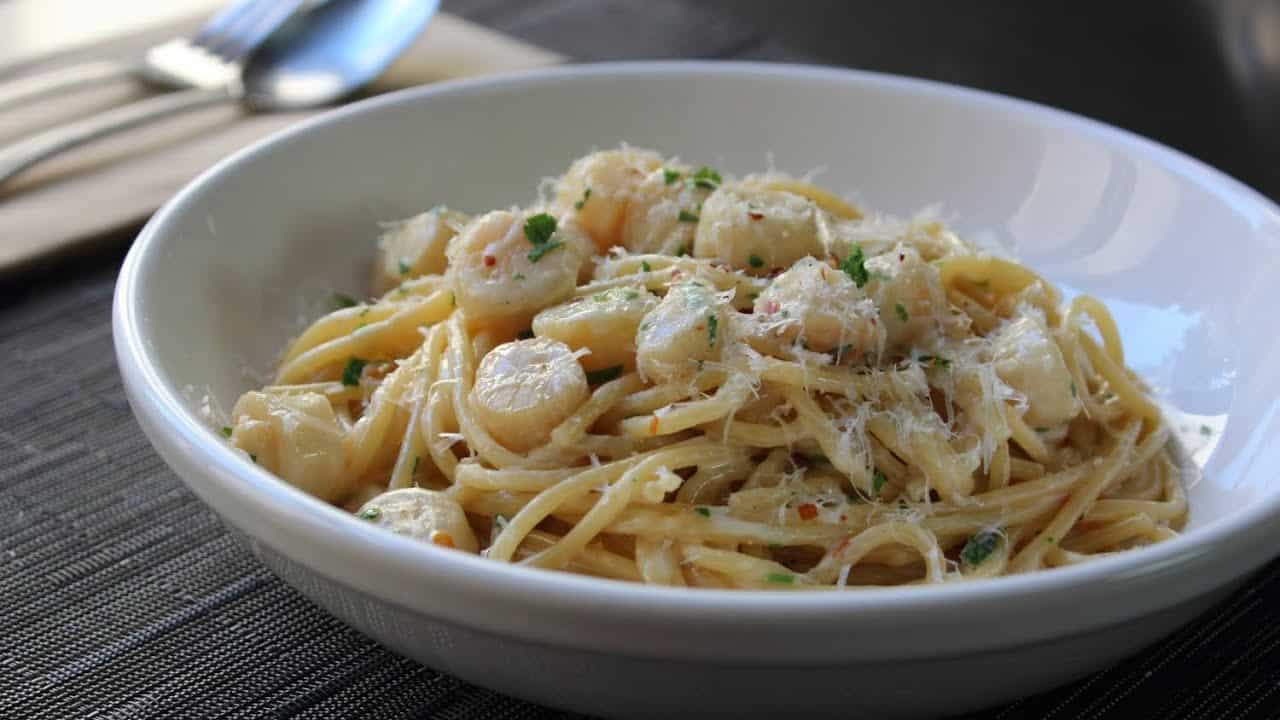 Can you tell by now that we really adore pasta? There’s just something about a hearty pile of noodles that suits the subtle but delicious taste of scallops so well! The more ideas we have in the archives for preparing the thing we love most a little differently, the better. This particular recipe from Food Wishes was another one that opened our kids’ minds up to scallops a little more. Take a better look at their page to see how this spaghetti with creamy bay scallops was made! 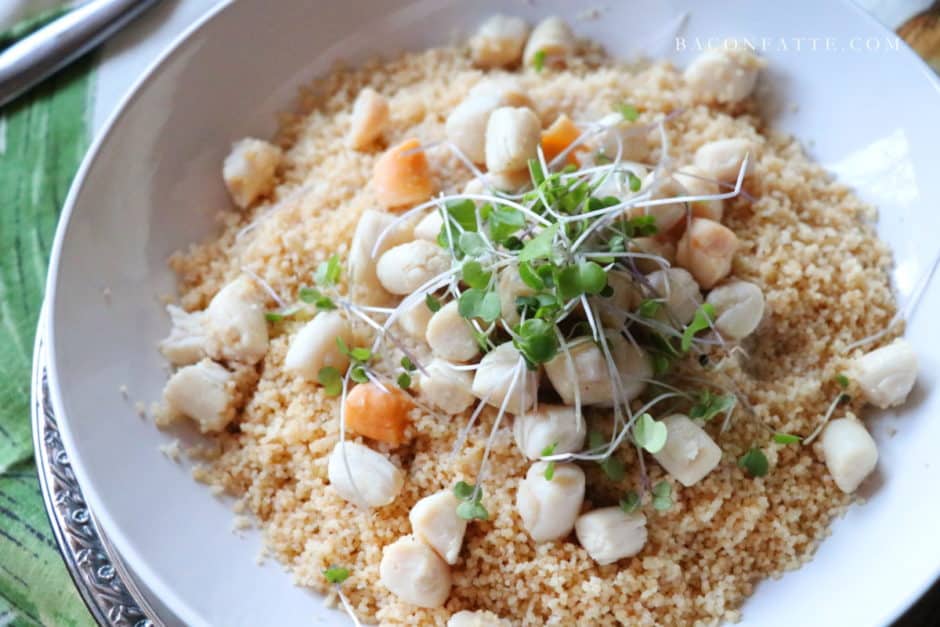 Whether you’re serving them over pasta, rice, or couscous (like you see in this photo), is your biggest priority just to make some delicious scallops, especially using the petite ones that you can buy in larger packages? Then perhaps you’d get along a little better with a recipe like this one from Bacon Fatte! They show you how to make tasty but light petite bay scallops prepared in a white wine sauce that’s surprisingly easy to do. 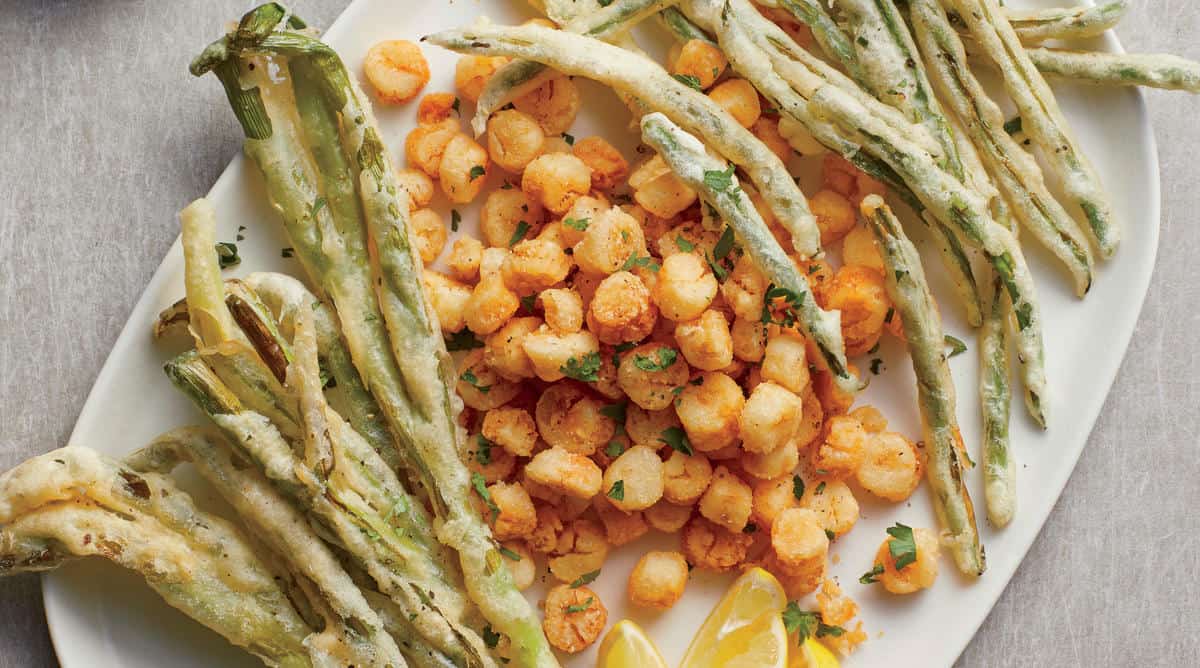 Are you still thinking about how much you liked the idea of frying your scallops until they’re crispy and a little crunch, but you can’t help wondering whether there isn’t a way to do them that’s a little lighter than the po’boy recipe we have you earlier? In that case, you just might be the perfect person to give this delicious recipe from Coastal Living a try! They show you step by step how to make a bay scallop fritto misto that has a little extra kick, but not really enough to classify the dish as spicy. 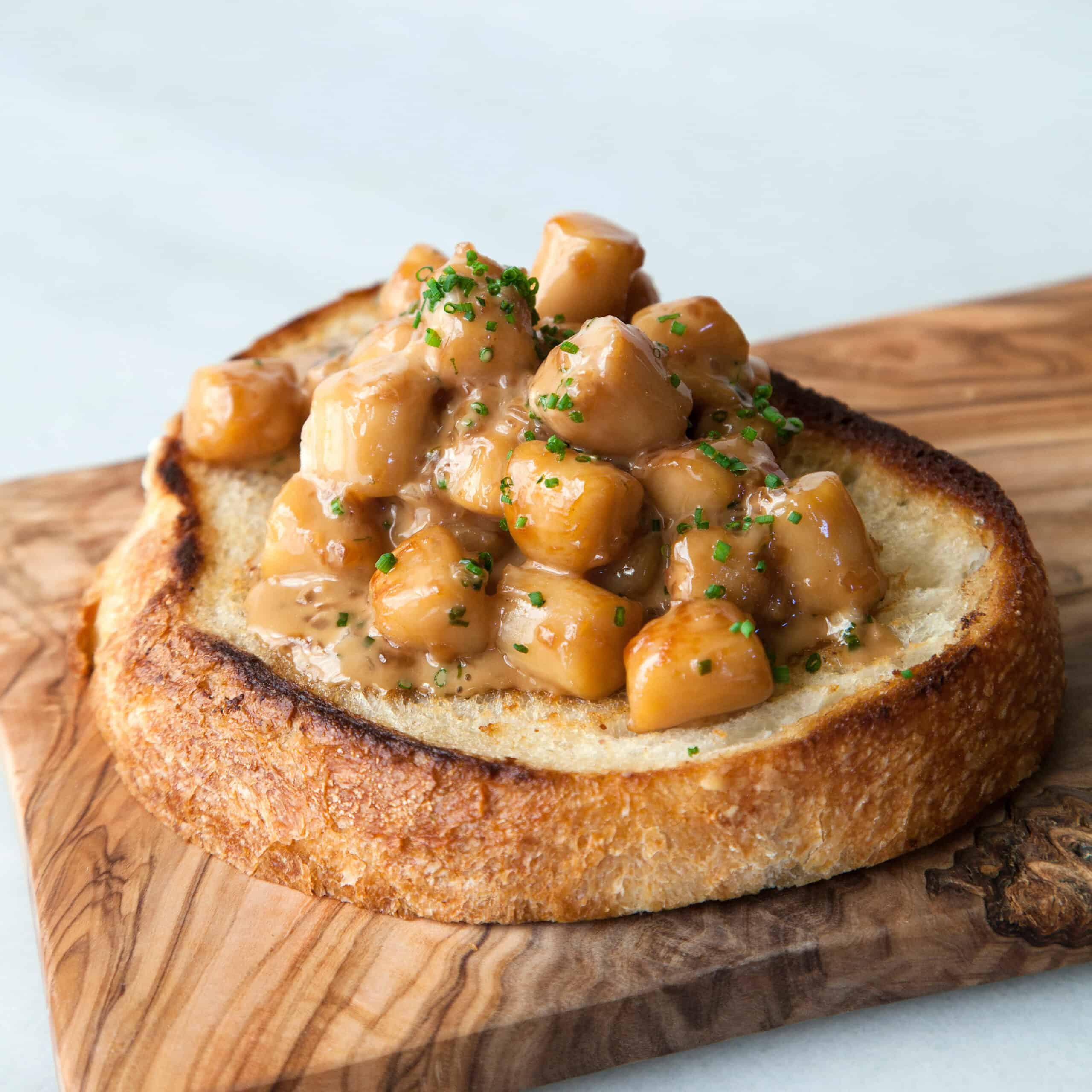 Just in case you’re still feeling in the mood for a slightly creamer scallops recipe but you’re also looking for alternatives to serving that kind of thing over something besides pasta noodles, here’s an idea that works quite well as a whole meal or as an appetizer if prepared on smaller pieces! Food & Wine is here to show you in detail how they made these bay scallop marsala cream toasts that give you a whole lot of rich Indian inspired flavour, without the heaviness of an entire curry served over rice.

Do you know another foodie who adores scallops more than just about anything else in the world but hasn’t often tried cooking them at home yet? Share this post with them to get them started, with all kinds of flavour options to boot!

Bay Laurel Care – How To Grow And Harvest Bay Tree