Astrantia is a charming plant to add some summer color and enjoy the delights of their branched heads. Their pincushion blooms are a pleasure to look at and admire as long as they’re in season. But for all its ornamental properties, masterwort was valued foremost for its medicinal values. Its aromatic roots were the source of a popular balsam for the stomach that helped with digestion and calmed a disturbed tummy. 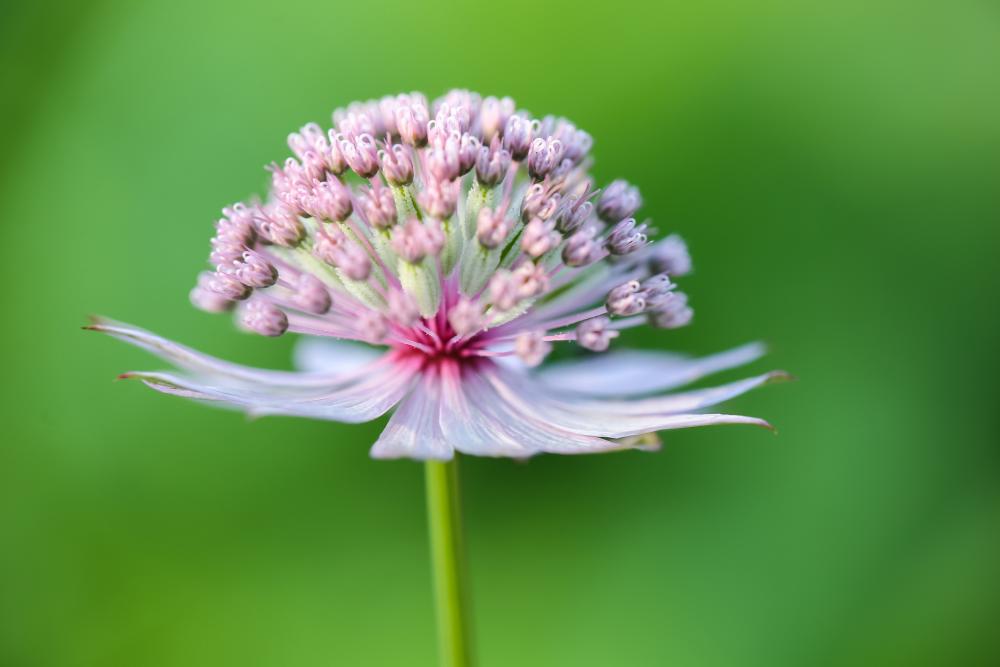 But we’re getting ahead of ourselves here since there’s more about this small perennial than meets the eye. It’s an excellent choice as a groundcover that protects the soil and creates a stunning landscape. And since it self-seeds and has a fast growth rate, you can cover up as much of your garden soil as you need without worrying about excessive care and maintenance demands. So what is the astrantia plant? And how do you grow it in your garden?

Astrantia at a Glance

A herbaceous perennial, astrantia originates from Europe. But its decorative values couldn’t be overlooked and as one of its cultivars, Astrantia Maxima, won the Award of Garden Merit from the illustrious Royal Horticultural Society, its popularity grew and crossed all borders. Today you can say this delicate perennial plant growing in gardens and as potted plants in balconies and patios.

It goes by many names including masterwort and Haiti’s Pincushion on account of its exotic-looking flowers. As a groundcover, the mature plant might not grow above 4 inches high. However, some cultivars can reach a whopping 20 inches high. As for their spread, the low-growing varieties have limited width that almost equals their height. So it’s all about choosing the right cultivar for your needs.

With its slender leaves, the dense foliage creates a lush green groundcover. But it’s the flowers that really make this perennial plant stand out. The flowers open in June and stay in bloom until late August. Each flower is actually a collection of small umbels with delicate shades of red and pink. They grow in clusters on top of a stalk and look like they have branched heads.

Add to that their natural ability to repel slugs and snails. For some reason, these pests stay away from a garden where masterwort plants grow. So that’s another reason you would consider growing this perennial in your garden. 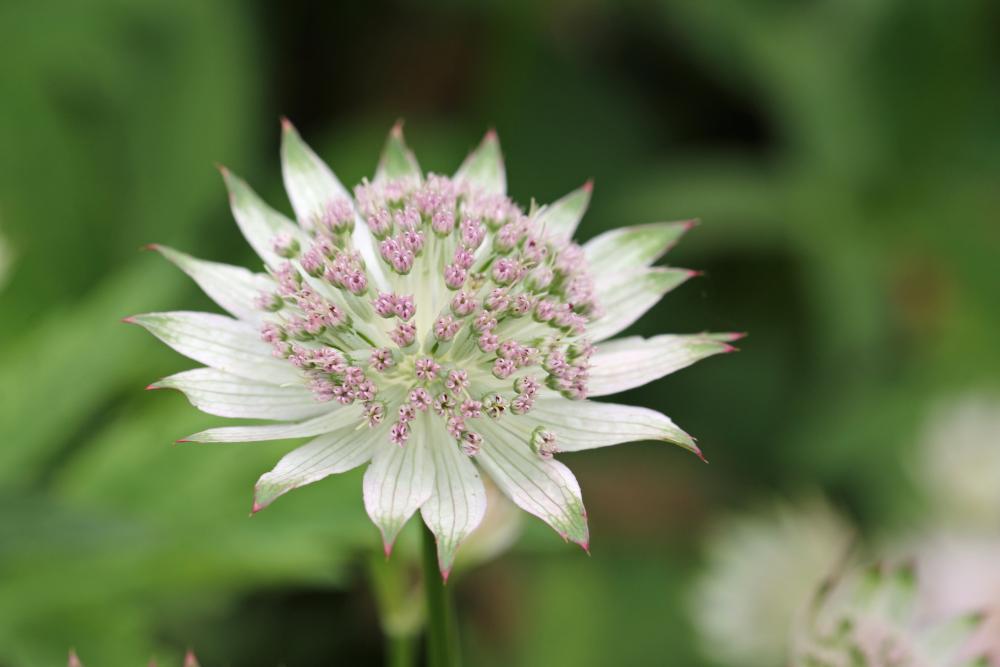 We mentioned that one of the astrantia cultivars won a prestigious award from the Royal Horticultural Society. And there’s no surprise there that the cultivar would be appreciated more than the natural species. Varieties and hybrids are cultivated for one purpose: to outdo the natural plant and make it bloom longer, have a higher yield, or resist diseases better. The same applies to astrantia plants. The different varieties of the plant have larger blooms and have different sizes to fit in the space you have planned for them. Here are some of those varieties.

How To Grow Astrantia

As a native of the Caucasus and Europe, you’d expect the astrantia to be hardy and cold-tolerant. But that couldn’t be further from the truth. To grow this perennial, you’ll need to cold stratify the seeds then start them indoors long before the last frost and keep the saplings sheltered until the weather has warmed up.

Seeds are the best way to start masterwort. Here’s how to grow the plant in easy steps. 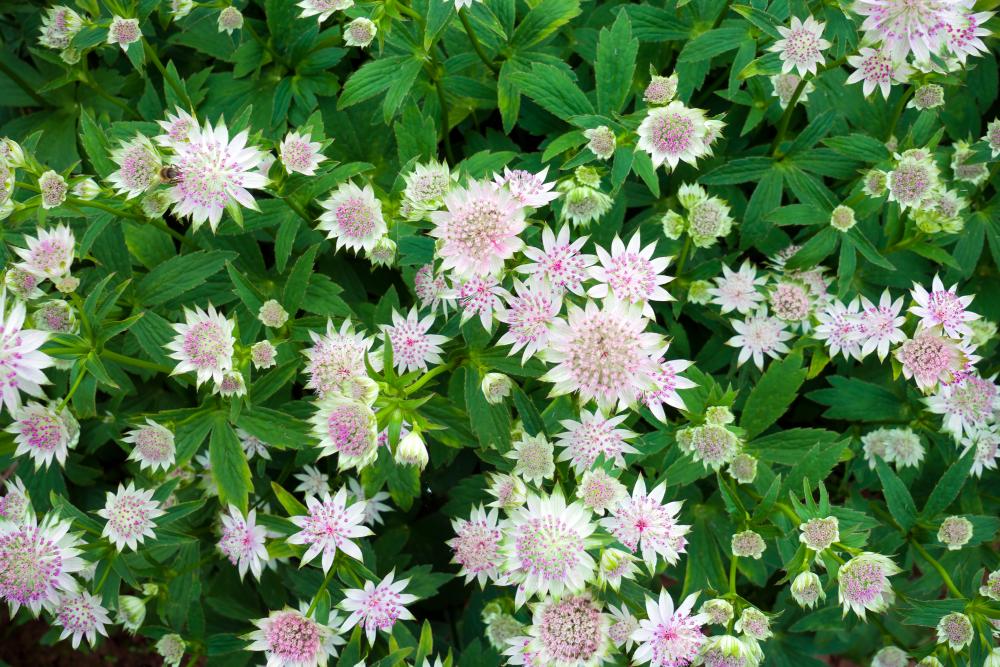 Starting astrantia can be an involved process if you want to grow it from seeds. However, you can also start it from a cutting and avoid the lengthy cold stratification process. In that case, you can start the cutting immediately indoors and transplant it to the garden when the weather warms up. As for astrantia care, the hardy perennial won’t put you out with some outlandish demands.

Once you have the astrantia seedling growing in your garden, you won’t have to worry about the soil or pH levels. It’s one of the advantages of growing this hardy groundcover. As long as the soil is rich in organic materials, you have nothing to worry about. That said, as usual, you’d want to create the ideal growing conditions for the plant and not put it through stress. So ensure that the soil is well-drained and has a loose texture. Heavy soil can slow down the growth of the root system of the plant and retain water for longer than the perennial prefers.

As soon as the summer heat picks up, you’ll need to take your watering can to the astrantia more often. The idea is to keep the soil moist and not too dry or too wet. To achieve that, keep your watering shallow, aim it at the base of the plant, and don’t allow the top 2 inches of the soil to go completely dry. How much water the plant needs depends on the weather conditions, the soil type, and whether the plant is exposed to the afternoon sun or not. On average, one inch of water every week is usually good enough for this herbaceous perennial. If you get decent rainfall during the growing season, that too counts as part of the weekly one inch of water quota.

Mulching rarely requires mentioning except in passing. But with a plant that prefers the soil to be moist and doesn’t do well when surrounded by weeds, you need to take mulching a little more seriously. When it comes to astrantia, you need to cover the ground around it with any organic materials you have at hand. You could use pine needles, fallen leaves, organic compost, or even straw. But since this is a groundcover plant that practically rises a few inches above the ground, you should place the mulch in the vicinity of the plant’s parameters. In the case of taller varieties, you can keep the mulch close to the base of the plant without actually touching the stem.

Astrantia is a heavy feeder. It needs plenty of nutrients in the soil to grow and thrive. This is why you will add organic compost or aged manure into the soil before planting the seedlings. And during the growing season, you’ll keep the perennial well fed. You can use any balanced fertilizer you like. However, experts recommend using liquid fertilizers instead of granular ones. Liquid fertilizers are easier to cut with water and make them mild. The young plant needs a much milder fertilizer than an established one. Apply the fertilizer once every 3 weeks during the growing season. Once the plant goes into dormancy, stop feeding it and wait until the next spring.

Deadheading astrantia works the same way it works with roses and other flowering plants. The idea is to prevent the flowers from developing seeds. Not only is this a resource-intensive process but it also means that the plant will not grow any more flowers. So cut the flowers once they start to shrivel to trigger more blooms. Another benefit of deadheading is that it keeps the plant from self-seeding. In most cases, you would want to keep the few astrantias growing in your garden without doubling or tripling them over time.

Astrantias are good showy blooms and you can dry them during the summer to preserve their beauty. One way to do that is to cut the flowers in full bloom and hang them upside down in a dry and warm room.

Even though astrantia plants repel slugs and snails, they’re still an easy target for other pests such as aphids, scale, spider mites, and other garden-variety pests. The problem with these bugs is that on top of the damage they cause to the leaves and stems of the plant, they also carry pathogens that trigger fungal infections.

Besides the usual ways of treating the small insects including neem oil and rubbing alcohol, you can also use a homemade solution that works both on fungal infections and the pests that cause them. You’ll need 5 percent apple cider solution, tap water, and a spray bottle. Mix the apple cider in a gallon of water and spray the plants about once every 3 weeks during the spring and summer. You can also use commercial fungicides, but they tend to have a negative impact on the environment and if you’re growing veggies or fruits in the vicinity, the edible fruits might get contaminated.