There’s a certain pleasure watching the Venus flytrap at work. The sweet nectar on the red velvet is too tempting for your average housefly, caterpillar, or unsightly worm to resist. Once the hapless insect crawls in, the two lids of the trap snap shut, offering the carnivorous plant a delicious lunch. If you hate bugs and pests as much as the next person, then chances are you had feverish dreams about growing the Venus flytrap in your garden. 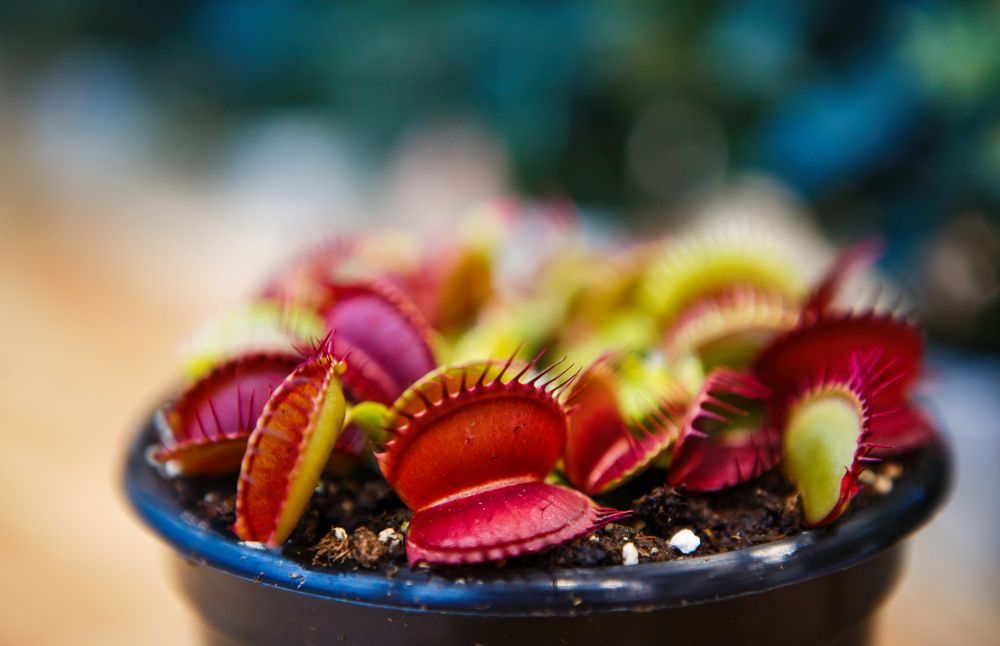 And when you consider all the pest management possibilities, you’d wonder how come this ingenious plant is not in every garden. Besides its insect-killing capabilities, the dwarfish Venus flytrap has a visual allure as well. Its bright colors, usually green and deep red, and unique shape are part of its appeal. Read on to find out how to grow and care for this useful carnivorous plant in your garden.

Venus Flytrap at a Glance

A native of the Carolinas, the Venus flytrap (Dionaea muscipula) is a friendly plant on a mission. Its mission is to rid your garden of as many pests as it can devour. Maybe that explains why its names (both common and scientific) are all about beauty and love. On their part, Native Americans called the plant titipiwitshik, which translates to “leaves that revolve in the wind.”

Currently, the plant is classified as endangered after the recent decline of its numbers in North And South Carolina. So by growing it in your garden, you’ll be helping preserve this unique species.

The first one to stumble on the plant was botanist Arthur Dobbs in 1759. He described a small plant with a rosette of four to seven leaves. Each leaf has two lobes that open and wait for an insect to wander in. The inside of each lobe is covered with fine and sensitive hairs. The first trigger gets the plant alert and a second trigger within 20 seconds snaps the lobes of the leaf shut. But the plant will not start secreting the digestive liquids until the insect touches five more hairs while being trapped inside. That saves the plant from wasting its precious juices on inedible triggers such as raindrops.

Despite its instinct to kill insects, Venus flytrap still needs them to pollinate the lone flower it grows once a year. This is why the flower rises on a talk stalk above the rosette. Bees and butterflies are safe to pollinate the white flower without risking getting trapped. 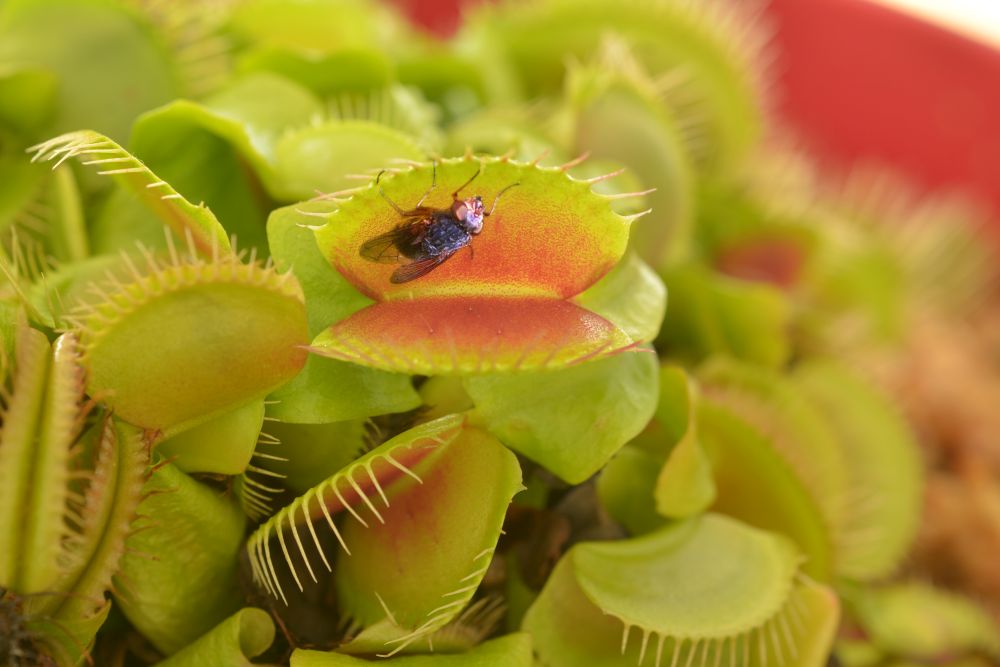 Many cultivars have made their way to the market since the first species of Venus flytrap was discovered. The new cultivars focus on the ornamental aspects of the plant rather than its insect-trapping mechanisms. In a way, mother nature has perfect the plant’s technique and left no room for improvement. Here are some of those cultivars.

How to Grow Venus Flytraps

You can always start your Venus flytrap from seeds. The seeds are easily available online, and it doesn’t take long before they start sprouting. Another way is to buy a small plant at the local nursery. However, there’s no guarantee that your nursery will have this rather rare plant. But for best results, you can start the carnivorous plant by division. Here’s how to do that in easy steps. 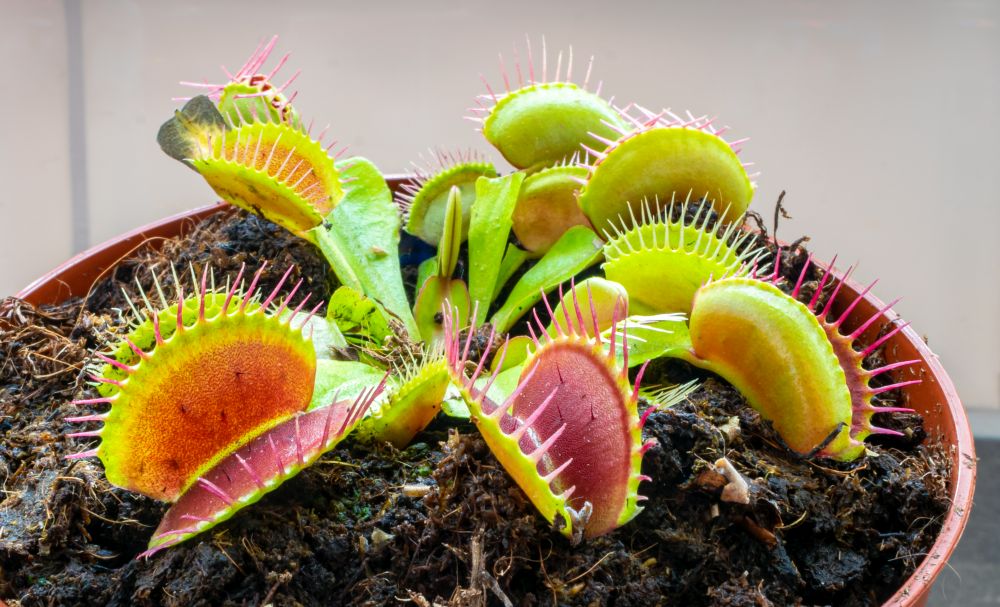 The main cravings of the Venus flytrap besides insects are good soil, plenty of sunlight, and regular watering. In the winter, it tends to go dormant, and you need to know how to care for it during dormancy so that it comes back in the spring.

Since you’re growing your Venus flytrap in a pot, then you can use a general-purpose potting mix. Every couple of years, you’ll need to repot the plant, so it might be cost-effective to make your own Venus flytrap soil. You’ll need perlite and peat moss. If you don’t have perlite, you can use coarse sand. Mix the two elements in equal portions and use the mix whenever you need to repot or propagate your carnivorous plant. The peat moss is nutritiously poor, and the perlite improves aeration, which encourages the growth of a robust root system. These are the two factors that quality the potting mix as Venus flytrap-friendly.

Since sunlight means more insects, the Venus flytrap thrives in sunny spots that get between 6 to 8 hours of sunlight every day during the spring and summer. You can still get away with just 4 hours of sunlight a day, but the plants won’t grow as vigorously with limited light. If you keep your plant indoors, place it on the sill of an open window that faces either the west or south. This encourages more insects to pay their final visit to the ever-hungry carnivorous flytrap. Even if the plant catches an insect, it still has three more traps per rosette to feed. So the more sun it gets, the more insects it catches.

Unlike other plants that are fussy about the amount of water and irrigation patterns, the Venus flytrap is fussy about the water itself. You can’t just give it tap water since the high mineral content could kill the plant. Instead, you should look for natural water as much as possible. Natural water includes rainwater, reverse osmosis water, and distilled water.

With that out of the way, you now need to keep the soil moist at all times. If you allow the soil to dry out between irrigations, the plant will die on short notice. This is a tricky part since the moisture in a potting mix evaporates faster than in the soil in the garden. Experts recommend placing the pot in a tray full of water for 45 minutes a day. This will prevent the potting mix from going dry without you having to worry about watering it every day.

Notice that we said feeding and not fertilizing. That’s because the Venus flytrap is a pure carnivore. It only feeds on insects and gets its nutrients from their carcasses. You won’t need aged manure or organic compost tea here. So if you grow the plant indoors where it won’t get enough insects, you’ll need to feed it with insects yourself. These insects should be preferably alive since the lobes need to be triggered five times after the trap closes for the plant to start digesting the insect. So make sure the bloodworm, cricket, or mealworm is still alive when you drop it inside the open trap. Then sit back and enjoy the show!

Winters in North and South Carolina are particularly cold between November and February. During those months, the Venus flytrap goes dormant. You’ll need to provide the same conditions for the plant to go dormant during those 4 months. So take the plant off the windowsill and place it near a window in the garage where the temperature drops drastically. Before the plant enters dormancy, its leaves will curl and turn black. Eventually, the rest of the plant dies away, leaving only the rhizome. Trim off the dead parts and allow this beast of a plant to sleep off the winter. By February, the plant is ready to spring back to life again, so you can repot it and divide it if you like.

With their infamous thirst and need for moisture at all times, some people prefer to grow the Venus flytrap in a terrarium. At least there, they’ll have all the moisture they need, and you can always set an insect loose inside the terrarium and watch it meet its demise between the teeth of the Red Piranha. However, growing a Venus flytrap in a closed terrarium can backfire. The high levels of humidity could trigger fungal infestations and rot. So as long as the terrarium has an open top, it will not cause harm to the plant.

Just keep in mind that you shouldn’t place the terrarium in the sun. The glass walls amplify the heat of the sun, which could cause the leaves to burn.

Carnivorous Butterwort Care – How To Grow And Care For Pinguicula