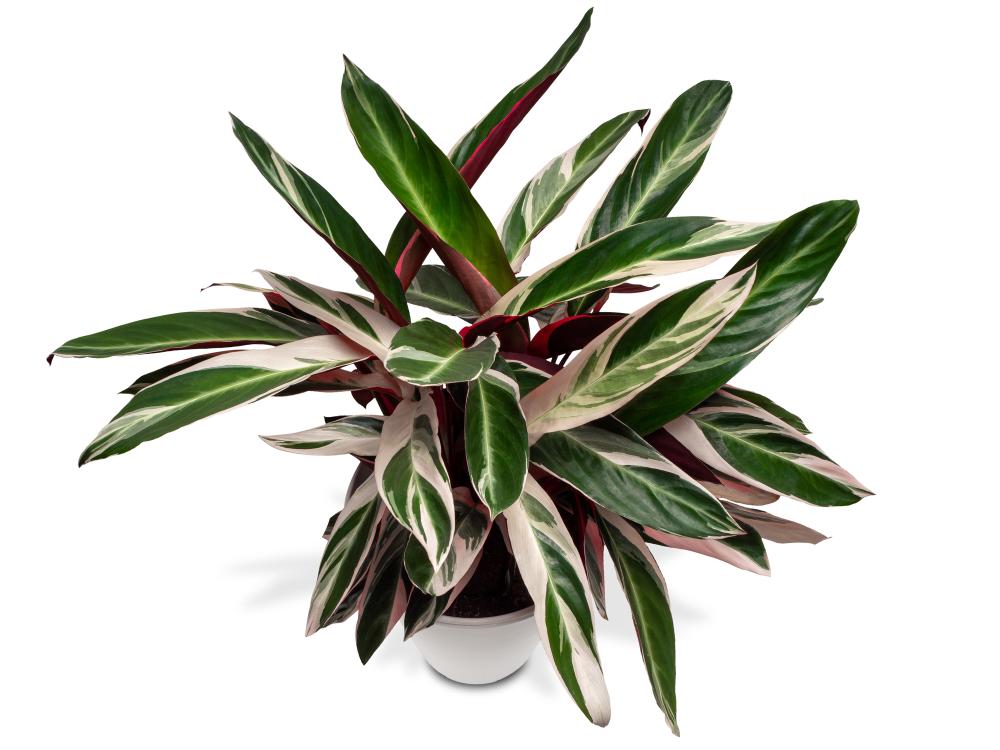 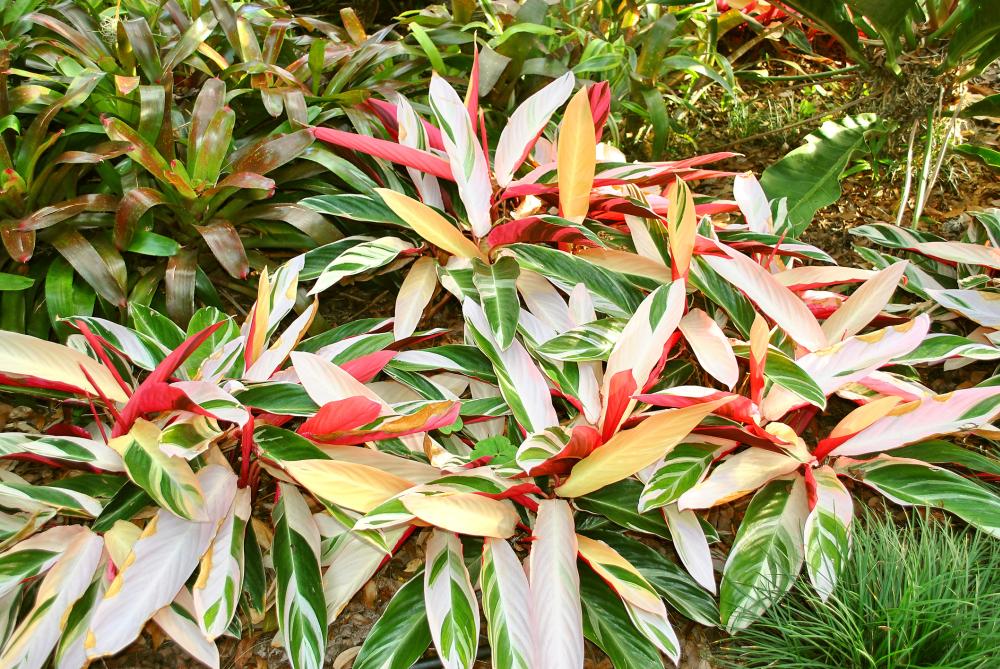 With a variegated pink shade, the triostar houseplant gives your indoor space a delightful ambiance that feels inviting and ecstatic. It’s a variegated type with a glamorous foliage color that hardly fades if provided with suitable growing conditions. 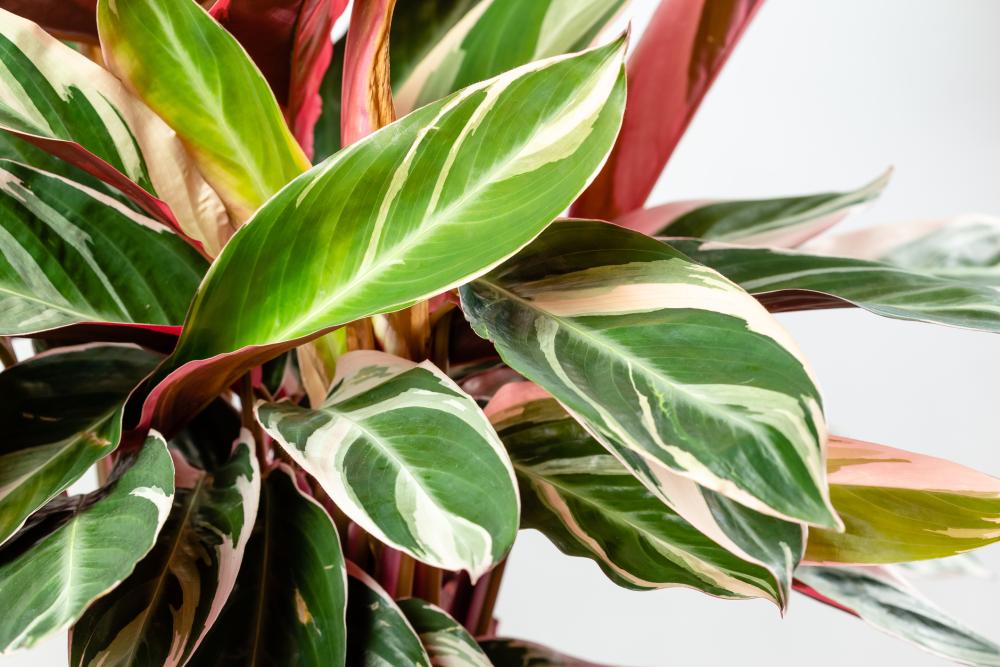 Although not the perfect plant for a beginner, the triostar plant is a sensational masterpiece that supplements your collection with a bold aura throughout the seasons.

Triostar Stromanthe at a Glance

It’s easy to mistake this tropical perennial for the calathea plant because of how it folds up its leaves during the night. The plant’s botanical name is Stromanthe sanguinea. It’s one among the popular species in the Stromanthe genus which belongs to the same family as the prayer plant. Well, at first glance, what dominates is the presence of radiant leaves. They’re large and colorful.

If you want to see your triostar plant bloom, you’ll need to move it outdoors during the spring season. On the underside of the leaves, you’ll see a purplish-red tone emerging as the plant grows older. The plant’s native region is the tropical rain forests of South America. There are high chances you’ll find this Stromanthe type being sold in your closest nursery or gardening store.

One striking feature about this tropical houseplant is how it grows in an upright position. The stems tend to elongate upwards, while the leaves spread up to 16’ inches wide. You’ll notice that the leaves will have a pink color on the underside, and the stems often appear reddish. When grown indoors, the triostar plant doesn’t grow overly tall.

Growing the triostar stromanthe plant isn’t cumbersome. You, first, want to look out for a spot with filtered light and humid conditions that mimic those of the tropical rainforest. If you’re looking to grow it outdoors, find a shady spot and check whether you’re living in an area with relatively high humidity.

When grown indoors, it’s difficult for the triostar houseplant to produce flowers. And if it does, it will probably be anytime between March and April. The blooms are usually white in color, covered by tiny, red bracts. To encourage blooming, you need to work with the right humidity and light conditions.

Tropical plants are generally accustomed to a bright environment. All the same, you still want to mimic the plant’s indigenous environment which tends to have rainforest-like traits. Place the growing medium in a position that gets enough bright, filtered light. It’s worth noting that any intense heat from the sun could burn the leaves. So, while you’re on the quest to find a well-lit spot, make sure to consider whether the position can offer some bit of shade when the sun is scorching.

The goal is to protect this tropical plant from direct sunlight, whether grown indoors or in the garden. Stromanthe plants can thrive with the morning sun alone so long as the number of hours it receives light is consistent.

When preparing the potting soil, it’s important to test it for both drainage and moisture retention. Both go hand in hand primarily if you’re looking to grow a tropical houseplant. Use soil that’s loose and can drain any excess moisture to the greatest extent. To create the optimal soil structure for your triostar plant, amend the potting soil with perlite or pumice. Both amendments help loosen up the soil, thus improving drainage.

You can also use an organic-based potting medium as long as it has the capacity to drain excess water. Avoid using a very large container as water might stagnate in the middle of the potting soil for longer hours. Use one that has enough drainage holes and can give extra room for the development of the root balls. Transplanting is only necessary when the plant becomes root-bound. Prepare the same soil structure to give your triostar houseplant the exact growing conditions it was inclined to before carrying out the transplanting exercise. The best time for repotting is in the late spring or the early weeks of summer.

If you’ve bought your triostar houseplant from a nursery, it’s not appropriate to transplant it soon as it lands home.As a pro-gardener, the elite way to go about it would be to double-pot (fixing the potted plant inside another container) it, to absorb any shock that could prevent it from getting accustomed to the new environment. Triostar plants are receptive to regular misting. After a complete growing season, flush out any chemical or salt buildups in the soil, and don’t get tempted to use tap water.

Before making your mind on whether or not to grow the Stromanthe plant, it’s worth noting that the tropical charmer thrives best under USDA hardiness zones 10 to 12. Room temperatures can give it the perfect head start during the early sprouting stages. But for an optimal growing environment, the Triostar stromanthe plant will need a warm and humid environment.You can expect it to pull through temperatures ranging between 65 and 80 degrees Fahrenheit. To maintain suitable humidity levels, most homeowners like to grow this tropical perennial on top of a bathroom windowsill.

Triostar plants don’t like excess heat and dry air. You don’t want to grow them near an air conditioner. If the ambient humidity range isn’t too low, you can maintain the suitable level by placing the growing medium on pebble trays filled with water. However, if the leaves start turning brown, you might need to scale up your efforts by misting the plant a lot more often. You can save your Triostar plant by using a room humidifier if it’s growing indoors.

Being tropical in nature, your Triostar will more likely demand consistent watering patterns. Your plant will lose its vibrancy if you fail to give it the right amount of water. While it’s best to consider the drainage efforts of the potting soil, you need to keep it moist quite constantly, but not drenched. If you’re leaving in a cooler climate, there would be a need to reduce the moisture levels. Since this plant is a little sensitive when it comes to how much water it needs, the most essential part is to consistently keep the soil slightly moist, without leaving it waterlogged. You also want to adjust the lighting so the moisture can evaporate efficiently.

Be more vigilant by looking out for signs on the leaves, to know whether the plant needs extra moisture. Make sure to check if the first few inches of the soil are entirely dry before watering your Triostar plant again. During winter, you want to drastically reduce the watering intervals. The growth hormones are usually dormant when the temperatures are low, so there won’t be room for new growth during this season. The other essential pointer when watering this tropical perennial is water quality. Using dechlorinated tap water that holds all sorts of impurities can cause the leaves to turn brown.

For optimal results, use rainwater, or one that’s filtered using reverse osmosis. Yellow leaves also indicate that the soil is waterlogged. Overwatering this tropical houseplant can lead to root rot, as well as a bunch of frightful fungal infections. If the soil fails to effectively dry out, you might need to transplant your Triostar stromanthe plant into a new growing medium.

You don’t necessarily need to feed this tropical plant. However, if there’s a pressing urge to boost the foliage quality, it’s best to use a soluble, balanced fertilizer. You will need to dilute the fertilizer at half its strength, to avoid burning the roots. There won’t be a need to dilute organic fertilizer since it’s less potent. The fringe benefit of using organic options like worm castings is they also help improve the overall soil structure and improve its water retention rate. During the winter months when the plant is dormant, there’s no need to use fertilizer. Regular feeding is only effective during the warm season.

Your stromanthe triostar plant isn’t fussy if you can get the growing conditions right. It might need repotting once every three years since the roots can get clamped together once they outgrow the original container. That would be the ideal time to replace the old potting soil with one that has all the essential nutrients, supports drainage, and aeration. When pruning, you’ll need to get rid of all the damaged leaves.

Use sterilized tools to prevent any spread of infections. It’s typical for leaves on a healthy plant to occasionally dry up. New ones will replace them over time. You, however, want to avoid pruning the foliage to more than a third its size.

How to Propagate the Triostar Stromanthe

The downside of growing this plant is it’s difficult to reproduce it using stem cuttings. If you’re looking to propagate your triostar stromanthe plant, the most effective to go about it is by separating a few rhizome clumps on the roots of the parent plant. Propagating your triostar plant using rhizomes isn’t complicated so long as you’ve sourced them from a mother plant that’s disease-free.

Each division needs to have about three or four leaves attached to it. Prepare a potting mix that helps retain some moisture, while draining any extra bit of it. The best time to propagate your triostar stromanthe houseplant is during spring or summer, preferably before any new growth starts to emerge.

You also want to use containers that can accommodate the root balls are they grow bigger. When uprooting the mother plant, moisten the soil to reduce any friction that would damage the roots as they tend to be somewhat feeble—especially after experiencing transplant shock. Before planting the rhizomes, check whether each has its own set of roots. After planting the rhizomes, place the growing medium in a bright spot, then keep the soil consistently moist but not soggy.

What’s utterly incredible about triostar plants is they aren’t prone to serious diseases. However, since they prefer to grow in an environment with high moisture and humidity levels, such conditions would highly likely attract mold or fungus gnats.

You can get rid of fungus gnats using natural remedies like cinnamon. If the foliage looks healthy and alluring, you might also have to deal with aphids. The effective way to get rid of these bugs is by spraying insecticidal soap or neem oil on the affected areas. If the humidity is constantly lower than the normal range, this might attract spider mites. You don’t need to worry about the safety of your kids or pets as this tropical houseplant isn’t toxic.