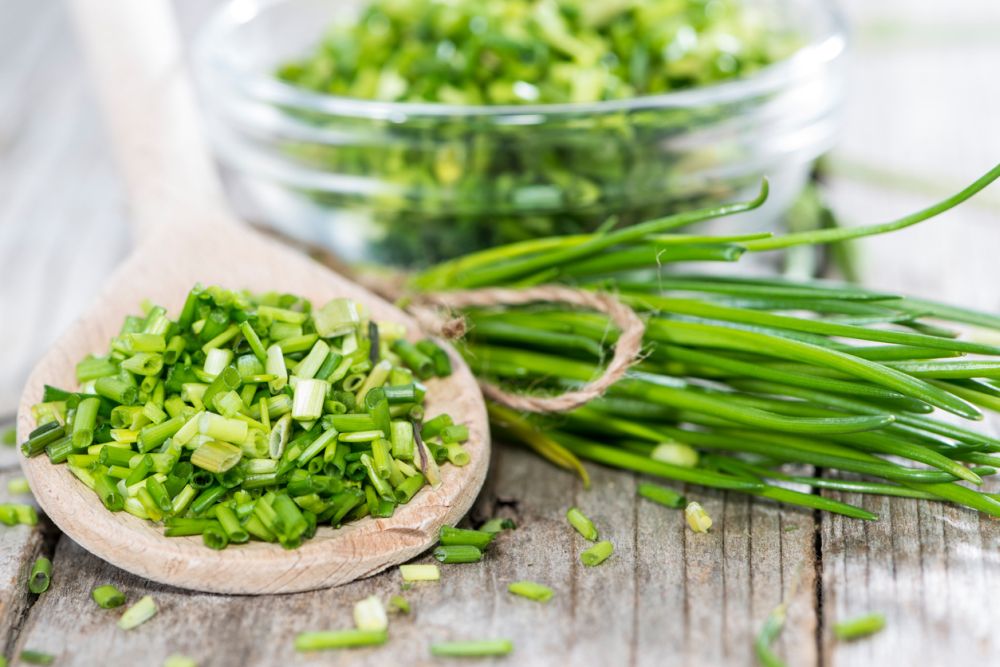 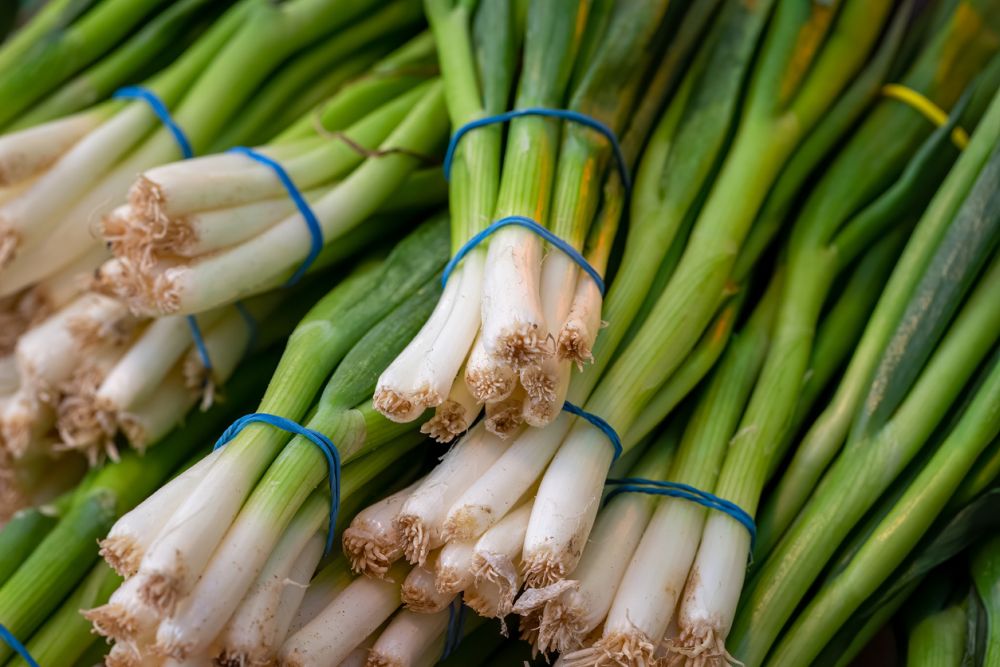 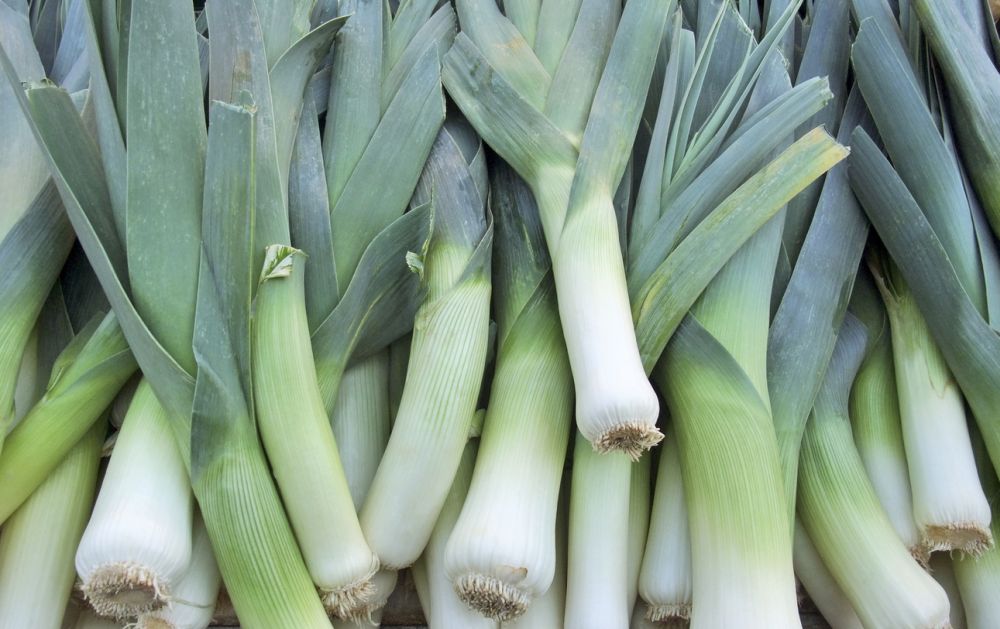 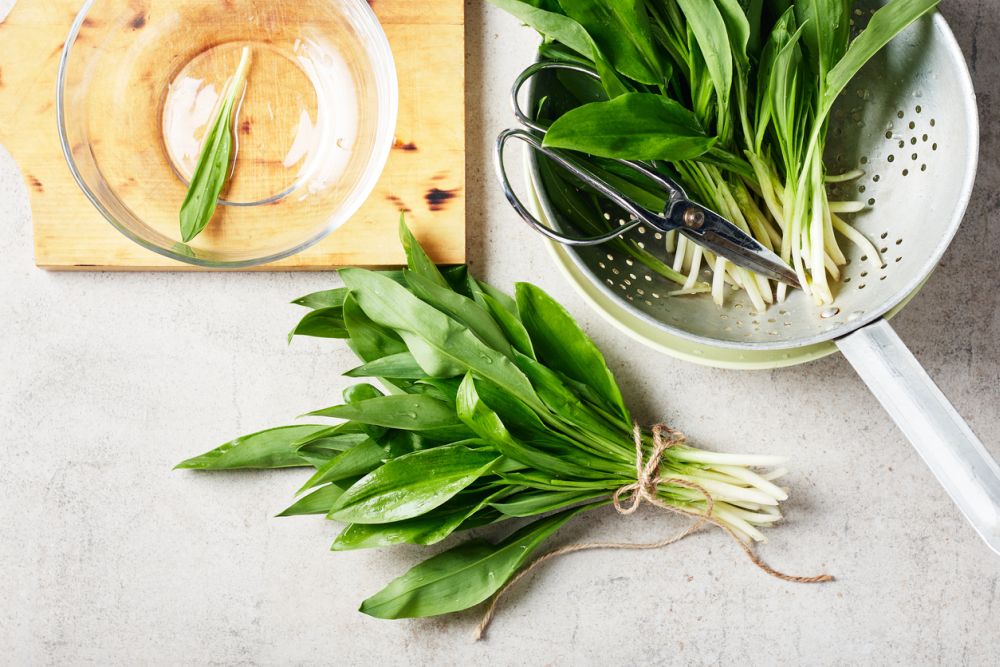 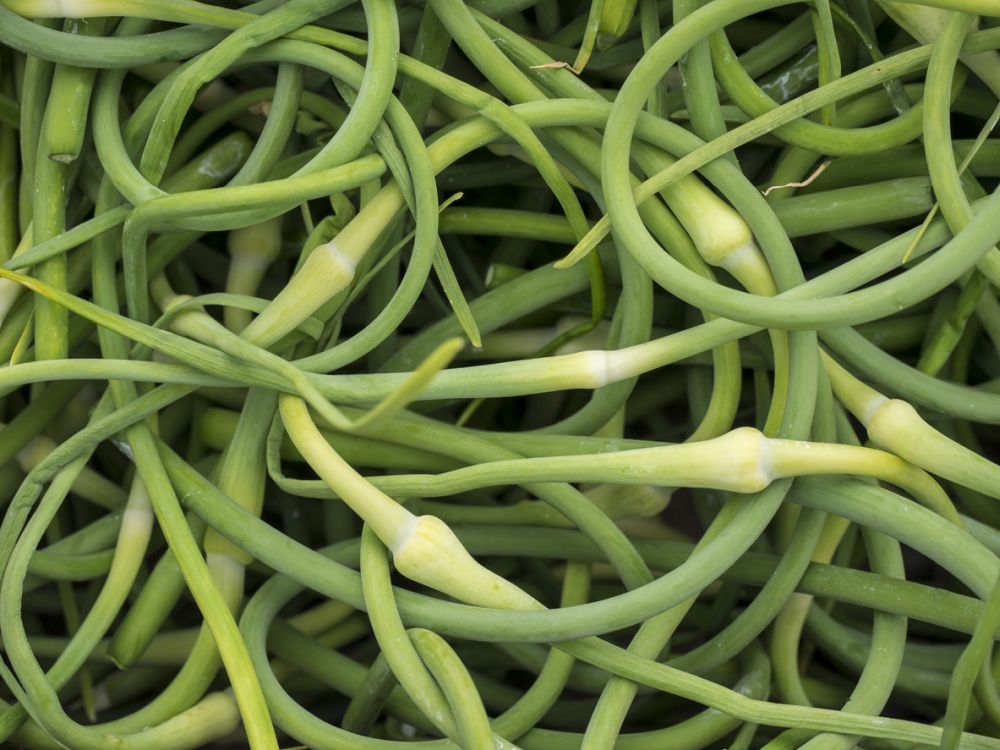 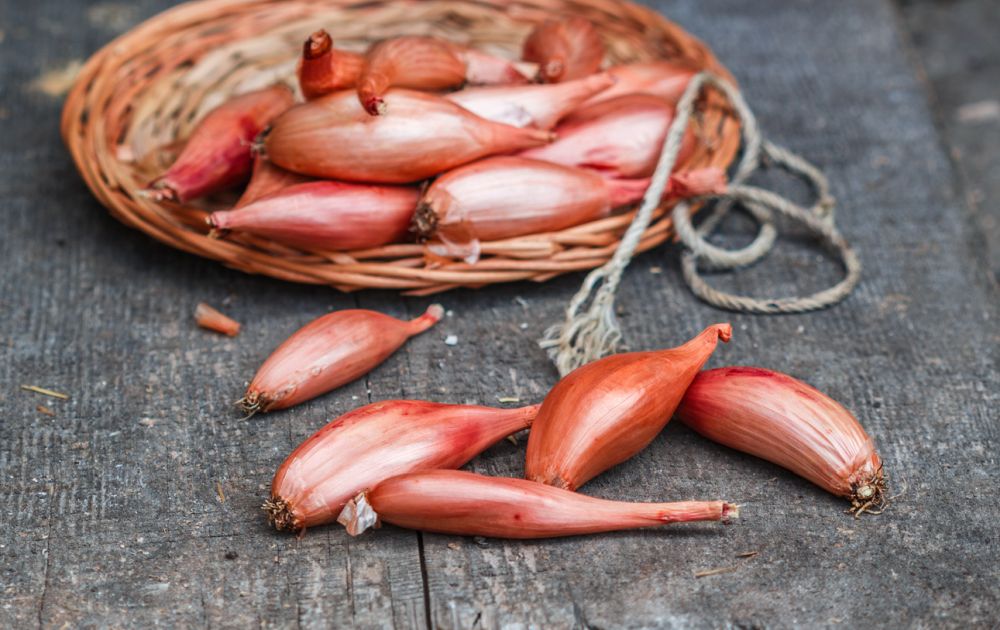 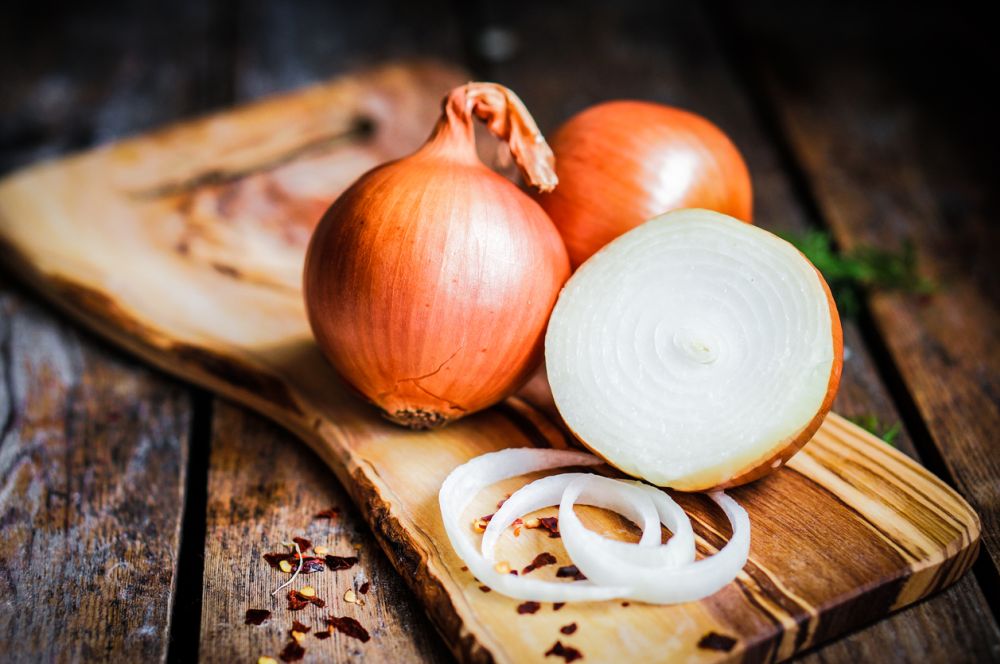 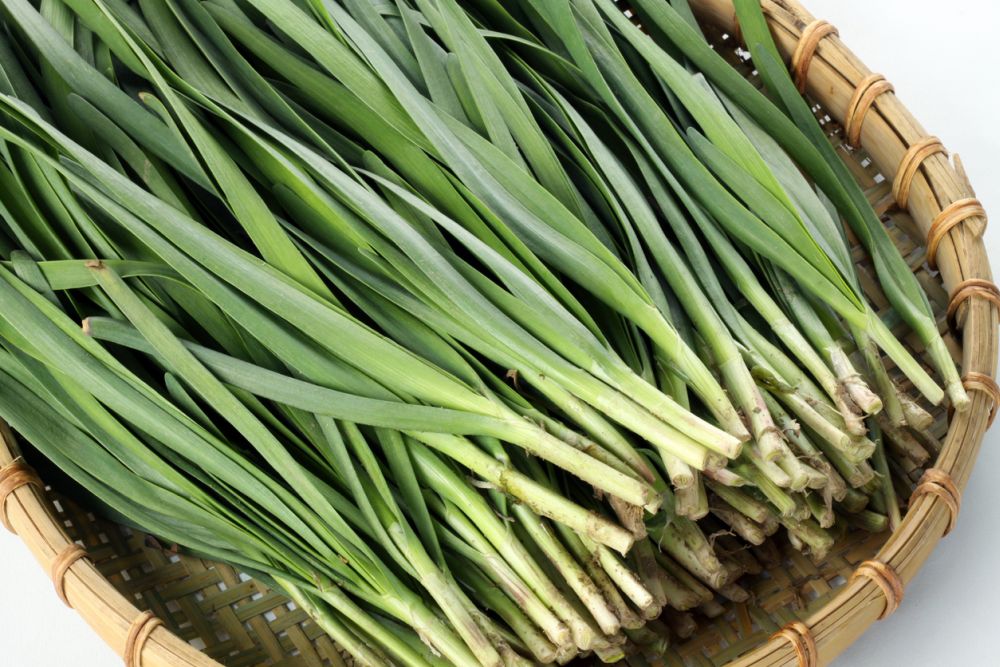 For many people, chives are essential in recipes like potato salad and Chinese chicken soup. But they can be hard to find in the grocery store, and they can be expensive when they are in season. Fortunately, you can always use a substitute for chives.

If you love cooking with herbs, you might have come across chives or used them.

Chives have a unique mild flavor and are used as a garnish to add an elegant finishing touch to dishes.

If you are used to chives, it can be hard imagining your dish without them. Yet, sometimes you may not have chives on hand.

Fortunately, grocery stores are never short of great chive substitutes you can use in a pinch.

Chives are a variety of garlic and onion. They have been used in Europe and Asia for thousands of years.

However, you can easily buy chives at your local grocery store. They are cheap and easy to use.

They have a characteristic bright green color with long and hollow stems. Their taste is mild, making them indispensable in some recipes like French delicacies.

How to Use Chives

The flavor profile of chives can be described as a delicate oniony taste with hints of garlic.

Because of their subtle flavor, they are better off added to a dish towards the end of the cooking process or just as a topping. A good example is this lasagna soup topping.

They will give your dish a gentle taste and a unique crunchy texture. Most people use chives to garnish soups.

However, the herb can work on many dishes, including spring rolls, smoked salmon, salads, and soups.

Add the herb to any dish as a garnish to give it a fresher taste and look.

The Best Substitute for Chives: Our Top Picks

If you know the flavor profile of chives, it won’t be hard finding a good substitute. Here are some ideal chives substitutes you can count on in a pinch.

When it comes to chives substitutes, nothing comes close to scallions since they look just like chives.

Scallions are just a variety of green onions and have a similar flavor as chives. You might even find yourself mistaking one for the other.

Like chives, the flavor of scallions is mild, but they have a more pungent oniony taste. If you are using scallions in place of chives, you have to reduce the number of scallions you use.

Scallions can be used as a garnish, but you can also add them earlier in the cooking process since they hold heat much better than chives. They come with many health benefits.

Leeks don’t look like chives, but they are still a decent substitute. These are a vegetable variety in the onion family.

They have a pepper-like flavor with stalks that are longer than those of chives. Because of that, they are harder to use as a garnish, but when chopped evenly, they do an excellent job of decorating a dish.

To use leeks, soak them in iced water and add them to food while cooking to help reduce their intense flavor.

Barlauch is sometimes referred to as wild garlic, wood garlic, or ramsons. It doesn’t look like chives but has a similar garlic-like taste.

Barlauch is used mainly as a cooking ingredient instead of a garnish. It tastes incredible when served with mashed potatoes and salads.

Some even use it to make pesto. To use barlauch as a chives substitute, cut into thin, long slices. Doing so helps reduce the intense garlic flavor.

Garlic scapes have green stalks that grow out of bulbs. Their appearance and taste are similar to that of chives hence why they make great chives substitutes.

You can either use garlic scapes when cooking or as garnish. In addition, they have a nice crunchy texture that you will feel in your dish.

Shallots are also referred to as Thai Red onions. They look nothing like chives but can be used when you don’t have chives on hand.

They look more like onions but with a peppery, sweet flavor. Use shallots to substitute chives in sauces.

Due to their peppery taste, use a small number of shallots; otherwise, you might ruin your dish with the intense flavor.

It is also not recommended to use them as a garnish, although you can do so sparingly.

Onions may sound like an odd substitute for chives, but they work well. After all, onions and chives belong to the same family variety.

If you are going to use onions, use fresh onions rather than onion powder. The only difference with chives is that onions should be added while cooking to soften them and reduce their intense flavor.

When using onions as a chives substitute, use fewer onions than you would use chives.

If you have an Asian store nearby, go buy yourself some Chinese leeks. It’s a leek variety with a flavor profile and appearance similar to chives.

Chinese leeks make the best chives alternative, thanks to their subtle taste and appearance.

You can use them to garnish food which is not hard considering that they have thin, long stalks.

How to Store Chives and Other Substitutes

Chives are used when fresh or frozen. They tend to lose their flavor if they dry out, so make sure that doesn’t happen.

To store chives and other substitutes like leeks, Barlauch, or scallions, store them in an airtight resealable bag. You can store them either cut or intact in the freezer.

What recipes use chives?

Use chives when making a French omelet, stuffed chicken, or crab cakes.

Can I use dried chives instead of fresh ones?

Dried chives are still a decent option when you don’t have fresh chives. However, when chives dry out, they lose their unique flavor and intense aroma.

You can’t also use dried chives as a garnish because of their unpleasant color.

To use dried chives, rehydrate them first and add them at the beginning of your cooking process to soften them.

Is eating too many chives harmful?

Overeating chives can lead to problems like indigestion. You should also stay away from them if you’re allergic to onions or garlic.

What’s the difference between shallots and onions as substitutes for chives?

While shallots and onions belong to the same family, they are very different. Onions, for one, are bigger and brownish-yellow in color. On the other hand, shallots are small and have a light reddish-purple color. Both, however, do an excellent job of substituting chives.

Can I use scallions as a chives substitute in Chinese dumplings?

Yes, scallions work very well in Chinese dumplings. However, the final taste will be slightly different than if you had used chives. It’s not a bad taste, but you will notice it.

If you could have it your way, you would want to cook with the right ingredients all the time, right? Nonetheless, thinking outside the box for a suitable substitute when you are in a pinch and don’t have a key ingredient will help save your recipe.

Chives is a herb that you may not always have on hand. However, as you have seen, there are so many other ingredients you can use in its place.

Some have the same appearance and flavor profile as chives, while others need some work to get the right flavor. Try out some of these options and let us know, in the comment section below, how it goes.

Growing Onions: Tips and Tricks on How to Grow Onions

Can You Freeze Green Onions? Here’s All You Should Know

Can You Freeze Onions?