When it comes to growing and maintaining the Peperomia Ruby Cascade plant, quite a lot goes into the picture. The Ruby Cascade is a dark leaf that’s generally popularized by its trailing vine since it grows longer than most peperomias you’ll typically come across. 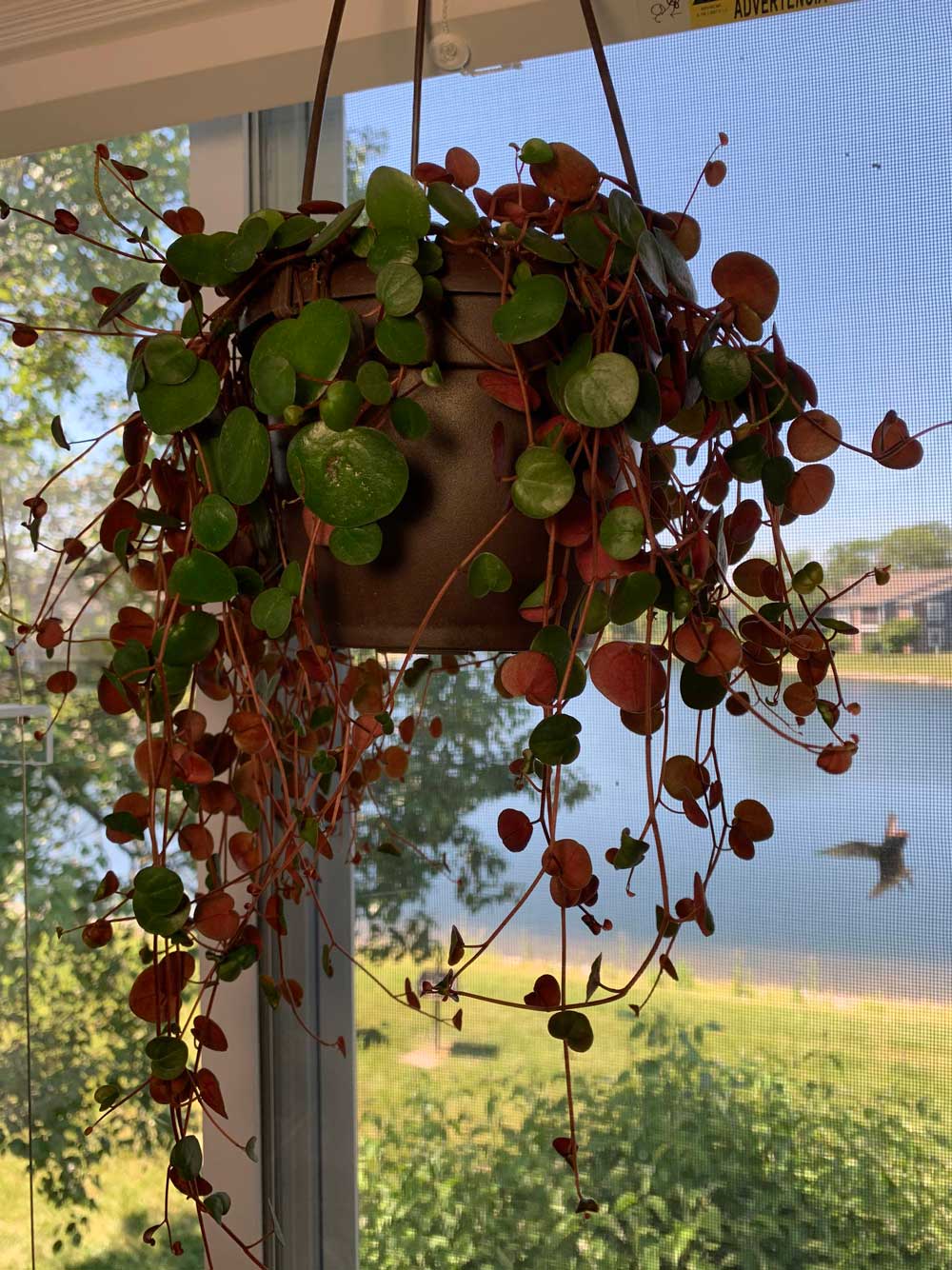 This tropical perennial is also commonly known as Ruby Peperomia, Ruby Glow, or the Ruby Cascade. It’s native to tropical parts of Central and South America —mostly in Peru and Ecuador. As a semi-succulent plant, this variety fits as a houseplant since it tends to thrive under many conditions, but taking adequate care of it is far much easier said than done.

In this guide, you’ll learn how to grow and propagate the Ruby Cascade, alongside some of the best practices to keep it alive.

One thing you’ll casually note with many Ruby Cascade plants is they feature attractive little round leaves attached to reddish trailing vines. They’re green on the top surface and have a bright, beautiful deep rose color on the back. Same as a few other species in the Peperomia family, the Ruby Cascade begins to sprout a few reddish funnel-shaped flowers as it grows.

It’s an incredible trailing plant with quite a distinctive foliage, and its tolerance for a wide range of growing conditions makes it ideal for anyone looking to expand their collection of houseplants.

The Peperomia Ruby Cascade has extremely elongated vines that make it the perfect plant to place on a shelf ledge or a tall hanging plant somewhere in your living space.

Most homeowners adore the Ruby variety for its compact size and glaring leaves, which make it the ideal plant for your home or office. During the Spring, it produces few flowers, so don’t get too worried around this season.

The Ruby Cascade is ideally an indoor plant, but can also thrive in an outdoor experience. It grows to about 3-5 inches in height if you choose to grow in a medium-size pot.

Even with fragile leaves, it has its tall stems that trail and spread outside the edges of their pot. So you want to install your hanging basket slightly higher from the ground.

If your first-timer looking to adopt a plant or a veteran in the indoor gardening space who wants to add a new plant to your vast collection, the Ruby Cascade is one species in the Peperomia genus that’s easy to grow and gets along with so many conditions. So rest assured that you’ll hardly be disappointed down the road.

First off, it’s ideal to note that most Peperomia plants do well in a blend of various growing conditions. Here’s everything you need to know about nurturing the Ruby Cascade at either home or in the office:

If you want the most from your Peperomia Ruby Cascade, say, a darker foliage yield, remember to place it somewhere with filtered light —preferably under a shaded patio.

Since it’s a tropical plant, the leaves will begin to rot when you put your pot under freezing conditions; hence the need to moderately expose it to light. If you place your Ruby Cascade in a dark place, the chances are that the soil will remain wet for long and cause the roots to rot.

Typically, the Ruby Cascade doesn’t survive in temperatures below 50℉. Freezing temperatures or too much heat prevents this variety from getting the optimal growing conditions it needs. The leaves will begin to wither if you expose your plant to these extreme conditions.

The Ruby doesn’t need close-range watering intervals since it’s a semi-succulent plant. You want to make sure that you plant your variety in a pot with drainage holes so that the water drains quickly.

As you probably know, if the soil is too soaked, this will ultimately cause the roots to rot, but don’t leave it to dry out completely because it can make the leaves wither.

To keep the roots from rotting, you need to grow your Ruby Cascade in a pot with enough drainage holes and keep tabs with the most fitting watering frequency.

Depending on the size of your growing pot, you can determine when next your plant needs watering by checking how moist or dry the first two or three inches of the topsoil is.

Most overwatered peperomia varieties tend to wilt and form scab-like protrusions on their leaves. During winter, your Peperomia Ruby Cascade doesn’t necessarily need regular watering. You just need to make sure the soil is moist but not soggy.

Your Ruby cascade peperomia will grow best in a peat-based compost in contrast to using the usual potting soil. A careful study from the Department of Plant and Soil Science at the University of Vermont similarly suggests that Peperomia varieties should be grown on soil composed of peat moss, sand, loam, or any other mixture that easily allows airflow and water drainage.

For optimal results, mix the soil components with a part of well-draining pumice. Pumice helps with drainage, air circulation and has the immense potential to maintain the microbial life, which in turn, regulates the nitrogen cycle in the soil.

An equally effective option is coconut coir which makes a suitable planting medium for many Peperomia varieties. Coco coir drains water much faster, so your roots will take in the essential nutrients such as nitrogen, phosphorus, and potassium.

After propagating your Ruby plant —which we’ll discuss next, it’s far much beneficial to choose a planting medium that properly drains the water, yet moderately retains some bits of moisture both at the top layer and beneath the soil.

Once your cuttings begin to take shape, you’ll probably need to re-pot them in a slightly bigger growing medium. But since cuttings will still appear tiny, you don’t necessarily need to use a pot whose diameter is more than 4 inches.

Huge pots tend to slow the rate of drainage so the roots might begin to rot if they’re soaked in water over more extended periods of time.

It’s also not healthy to keep repotting your plant now and again since it all results in stunted growth. When your Cascade matures, we suggest transplanting it during the spring season before the growth cells begin to rejuvenate.

Further Reading- 5 Best Potting Soil and How to Choose The Right Mix.

How to Propagate Your Peperomia Ruby Cascade

The best time to propagate the Ruby Cascade is from early spring to late winter, but the vast task is how to go about it. Most often, propagation for this plant is best done either through cuttings or division.

You can divide the Ruby Cascade plant whenever you want to transplant it. For best results, you need to:

You can also propagate by the leaf or stem cuttings:

Pro tip: Don’t seal the base of the vine thoroughly since the Ruby Cascade is semi-succulent and excessive humidity is detrimental to its growth.

Did you also know that you can propagate your Ruby peperomia cascade using water? Sounds impractical, right? Here’s how you do it:

Luckily, the Peperomia Ruby Cascade isn’t prone to many pests or any diseases, except for mealy bugs, which appear in the form of cotton growths on the bottom parts of the leaves. You can remedy a mealybug infestation by weeding them out using tweezers or wiping them out using an alcohol-infused cotton swab.

If the infestation is mild, you can spray neem oil on your plants to suppress the attack. However, if the attack is extreme, the preferable course of action is to propagate your plant using a fresh stem cutting.

You’ll plant might also experience stunted growth and lack the essential nutrients if you place it under immensely cold conditions. To remedy this, put it somewhere with a regulated temperature.

One of the best times to prune your Peperomia Ruby Cascade is at the end of the fall season. It’s also the best season to gather stem cuttings for propagation. Pruning helps get rid of the large stems as well as control growth and the size of your plant. Always do it with moderation because too much pruning may interfere with growth or, worse, permanently damage your plant.

Peperomias are famous for their fabulous foliage. It’s nicely layered, and this gives the plant a glossy, lively appearance. This kind of aesthetic is what every homeowner desperately wants. Additionally, the Peperomias are eco-friendly houseplants because their foliage purifies the air.

Now that we have demystified the Peperomia Ruby Cascade alongside the best practices you need to observe, it’s time to give it a shot by putting it in your DIY bucket list. Don’t miss to keep us posted on the result right in the comment section below.

Peperomia Graveolens Care: How to Grow & Care for the Blue Glow Peperomia