Have you ever tried a juice in stores or at a friend’s house, or maybe while you’re out at dinner somewhere, that has absolutely shocked you in how much you enjoyed a particular flavour? We had this experience with pineapple juice recently and, even though we’ve always loved the taste of pineapples, we couldn’t believe just how delicious this particular flavour blend was. Being the big DIY enthusiasts that we are, however, our first response (rather than just running to the store and buying some pineapple juice) was to start looking up just about as many different pineapple drink recipes as we could possibly find! If you’re going to try and recreate a flavour you loved, you might as well get the extra satisfaction of having made it yourself, right?

Just in case you adore the idea of trying new kinds of delicious pineapple drinks at home just as much as we did, if not more, here are 15 of the very best ideas, recipes, and flavour combination ideas that we’ve come across in our search so far! 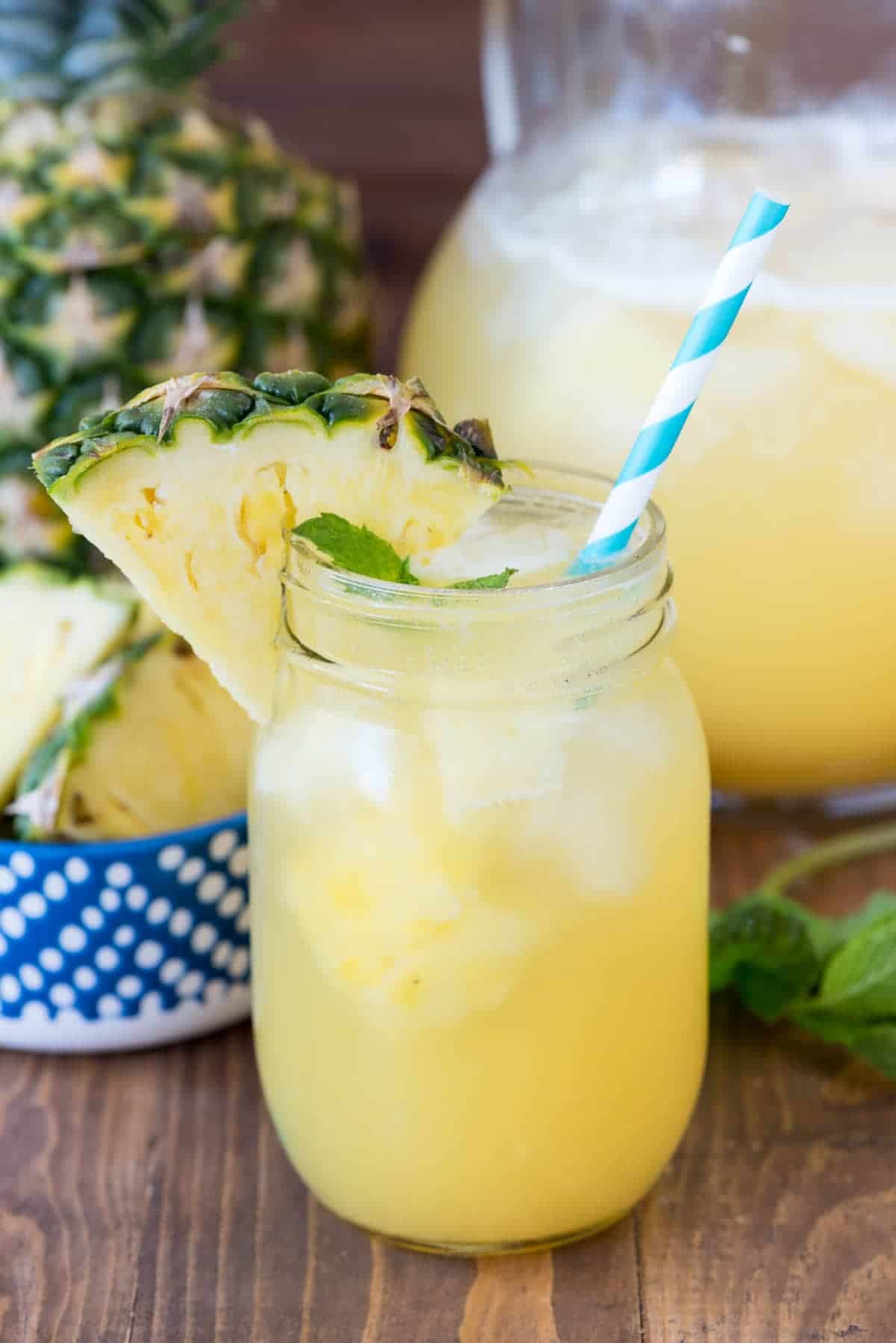 Even if you love the idea of coming home at the end of a long work week and enjoying a nice cocktail to unwind with your friends, would you rather make the kind of drink that everyone can enjoy, whether they add a shot of alcohol or not? We’ve always thought that way too, which is why we loved it when we find a recipe like this pineapple party punch from Crazy for Crust that doesn’t actually rely on the alcohol for flavour, meaning it’ll taste delicious either way! 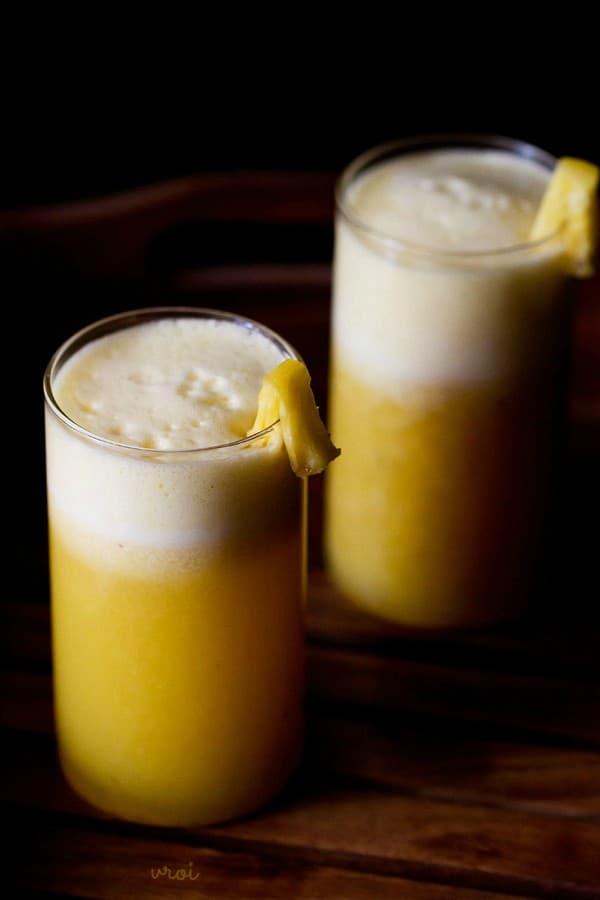 Perhaps you’ve actually just been finding yourself very enamoured indeed with the idea of doing a bit of juicing at home, since you can’t possibly forget the wonderfully fresh taste of that freshly squeeze pineapple juice you tried when you were out the other day? In that case, we have a feeling you’re going to find this nice, clear tutorial featured on Veg Recipes of India very helpful indeed. They show you how to squeeze a perfect tasting fresh homemade pineapple juice of your very own. 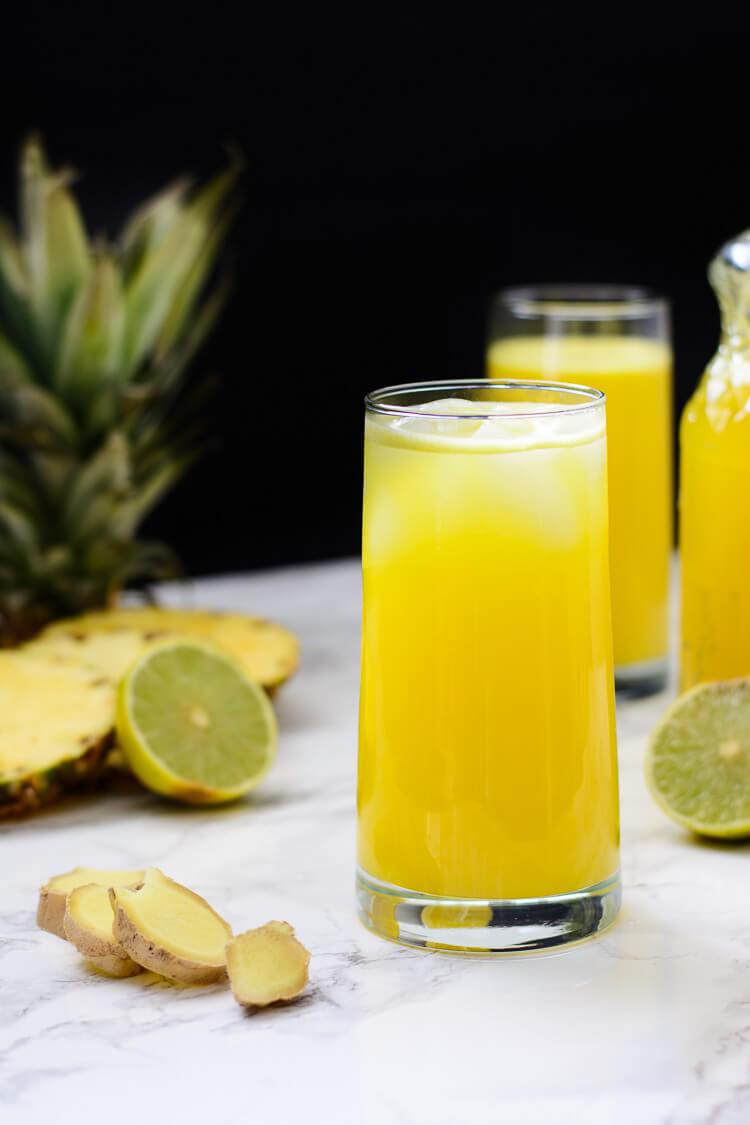 Have you actually been hoping to up your juice intake because you’ve been feeling a little bit under the weather, but the taste of pineapple juice appeals to you much more than that of the classic orange juice everyone always recommends for fighting illness with vitamin C? In that case, we’d definitely suggest taking a look at how Yummy Medley added a bit of ginger to theirs so that their concoction is good for fighting against nausea as well! The combination tastes absolutely delicious, to boot, so it’s a great idea all round. 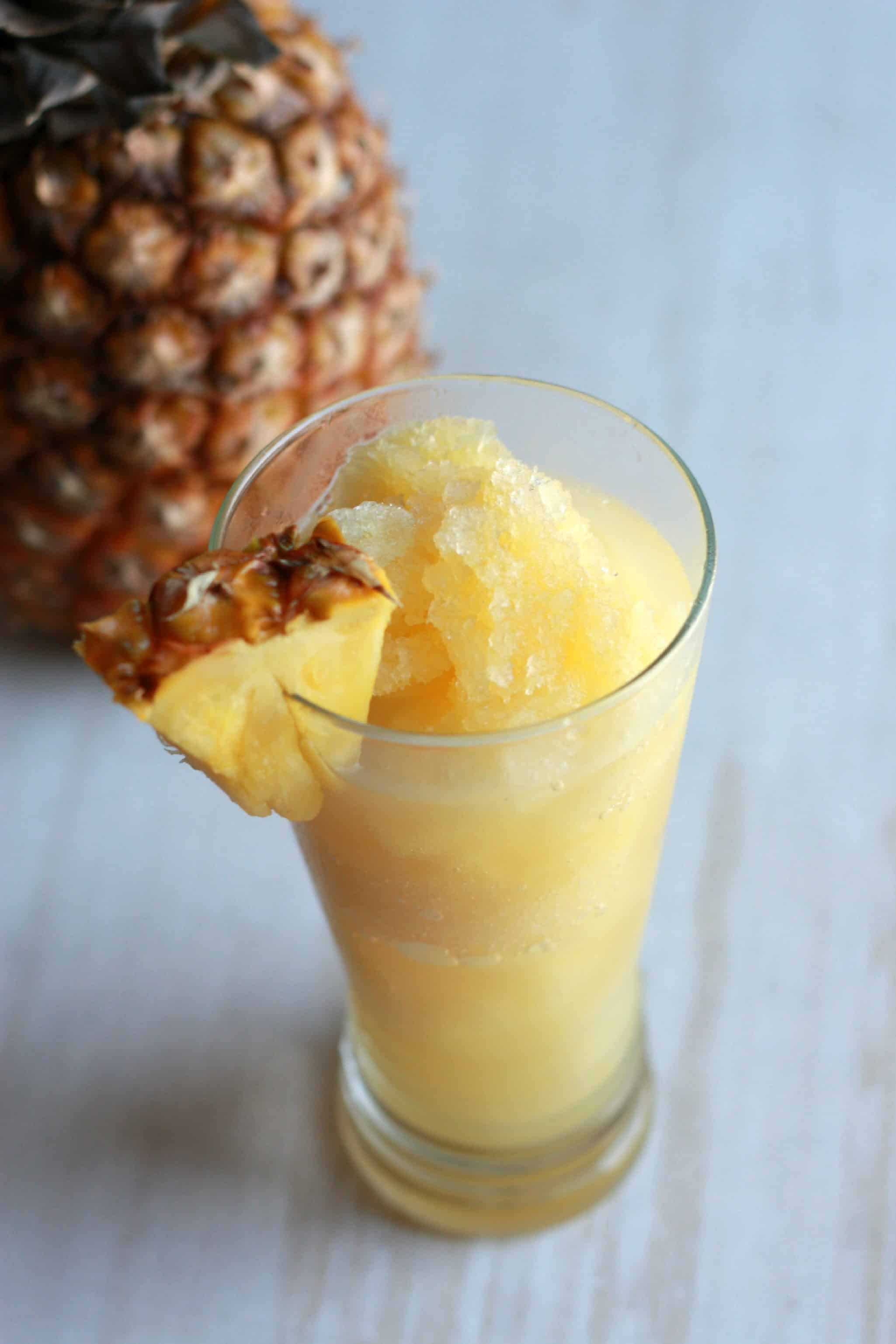 If you’re going to make a drink from your very favourite flavour, would you rather make something really cool and unique that borders on being a treat? In that case, we’d absolutely suggest taking a look at how Everyday Jenny made this cool sweet pineapple slush that is definitely better tasting than the slushies you’ll find in stores. We love this idea particularly because you can choose just how sweet you’ll make it! 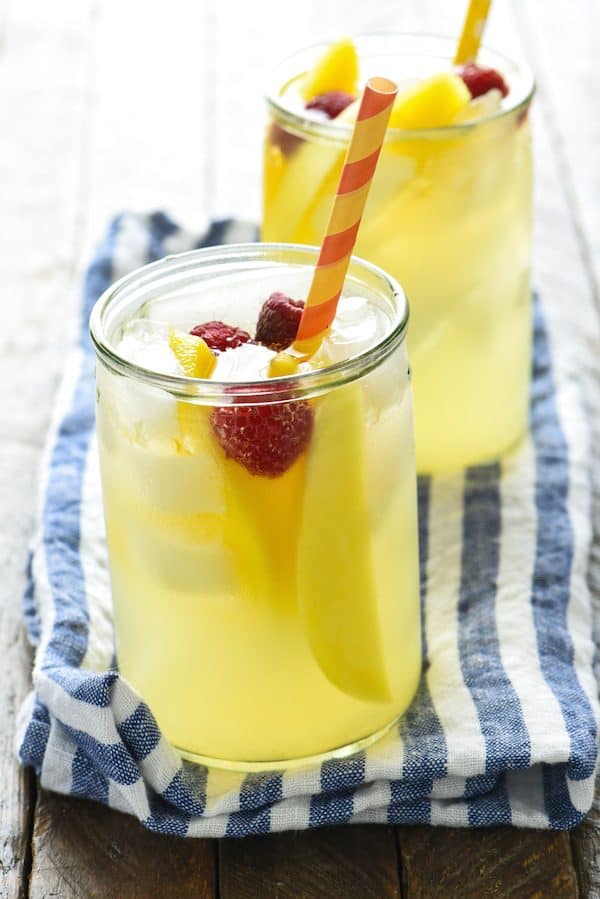 Does the idea of making a delicious drink from fruit always make you think of sangria, even though you’re not necessarily the biggest wine fan in the world? Well, we’re pleased to let you in on a little secret: you can actually make a kind of lighter tasting sangria that’s a little less wine and little more of the fruits you love! Clearly, this primarily pineapple sangria recipe featured on Foxes Love Lemons is our absolute favourite, but we’re sure that’s no surprise to you. 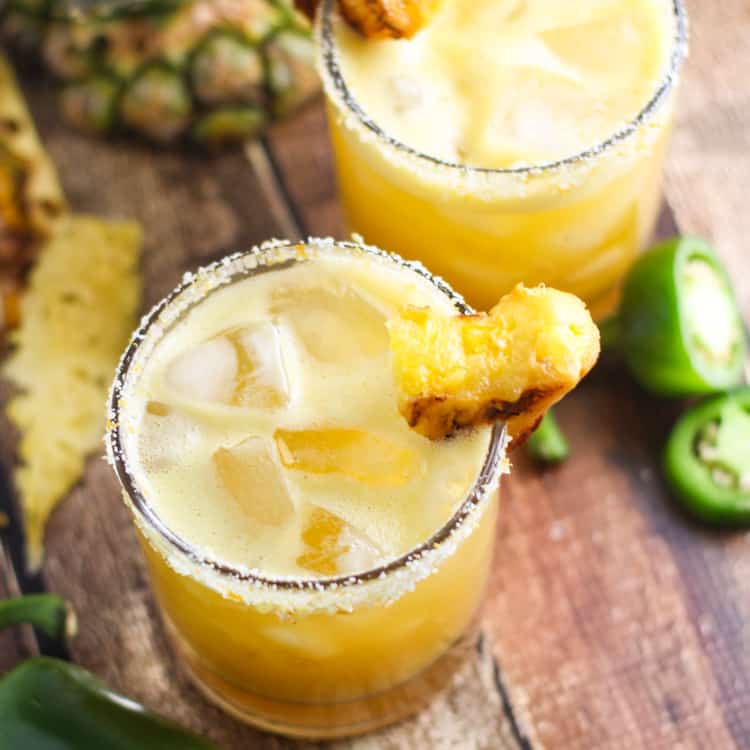 Did we really catch your attention when we started talking about pineapple based alcoholic beverages but you’re insistent upon finding a flavour combination that’s really unique indeed? Well, if you’ve ever been a fan of margaritas, then here’s one that we’d be willing to bet you’ve probably never tried before or, at least, that we sure hadn’t! Check out how Platings and Pairings made these grilled pineapple jalapeno margaritas step by step. 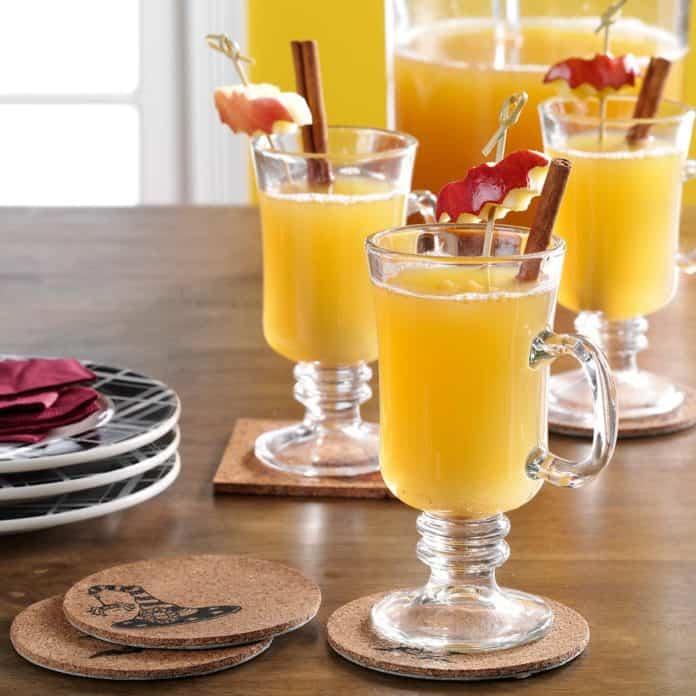 Are you still thinking about healthy fruit juices that will give you all the nutritional benefits that each one would have individually, but that let you enjoy a particularly delicious flavour combination when they’re mixed together? In that case, we think you simply must give this extra tasty (and rather healthy) apple pineapple drink featured in detail on Taste of Home a fair try! 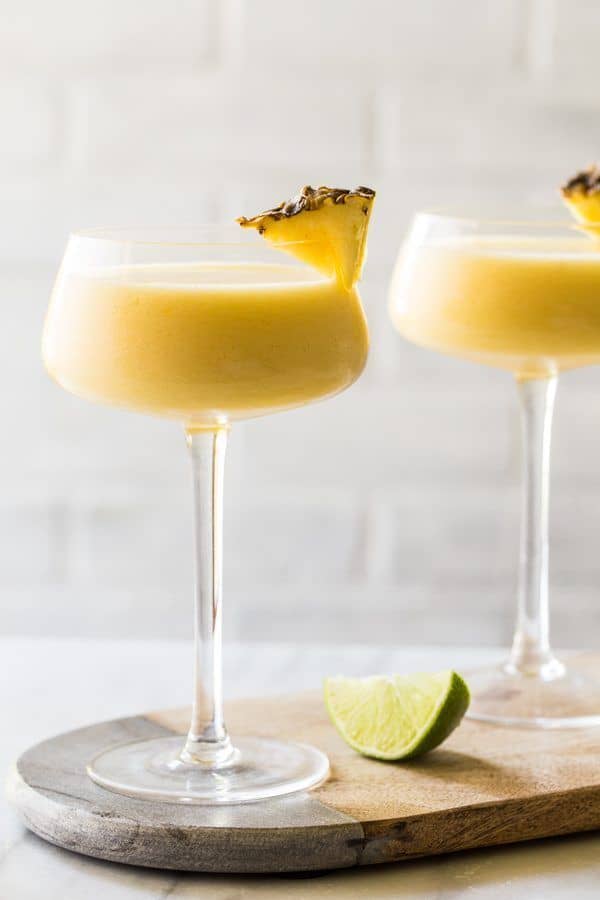 If you’re going to go to the trouble of making yourself a fancy cocktail, going to all that effort and putting in the time, would you rather make something that makes you feel fancy, rather than just mixing some juices and adding a shot? Well, if you happen to like mangoes even half as much as you love pineapples, we have a feeling this frozen mango pineapple daiquiri might be right up your alley! See how it’s made on My Baking Addiction. 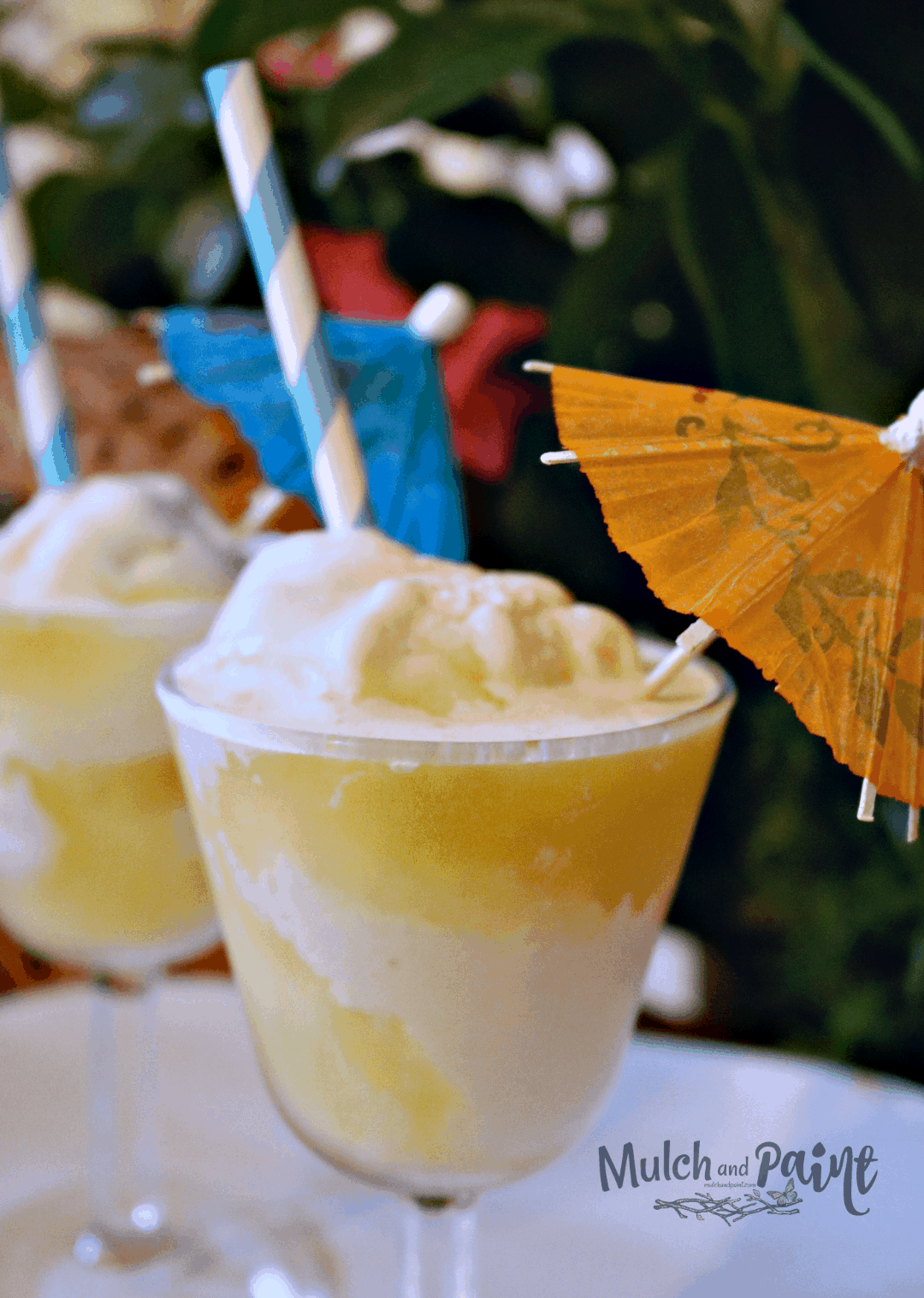 If you’ve ever been to any of the Disney parks then we hope to all hopes that you’ve tried the wonder of Dole whips before! If you haven’t, then we need you to look them up and read about how delicious they are, first things first. Next, we’d suggest taking a look at how Mulch and Paint made a drink version of the classic ice cream treat that tastes just like the real thing! We love these so much that we had a hard time not making ourselves one just about every single day this summer. 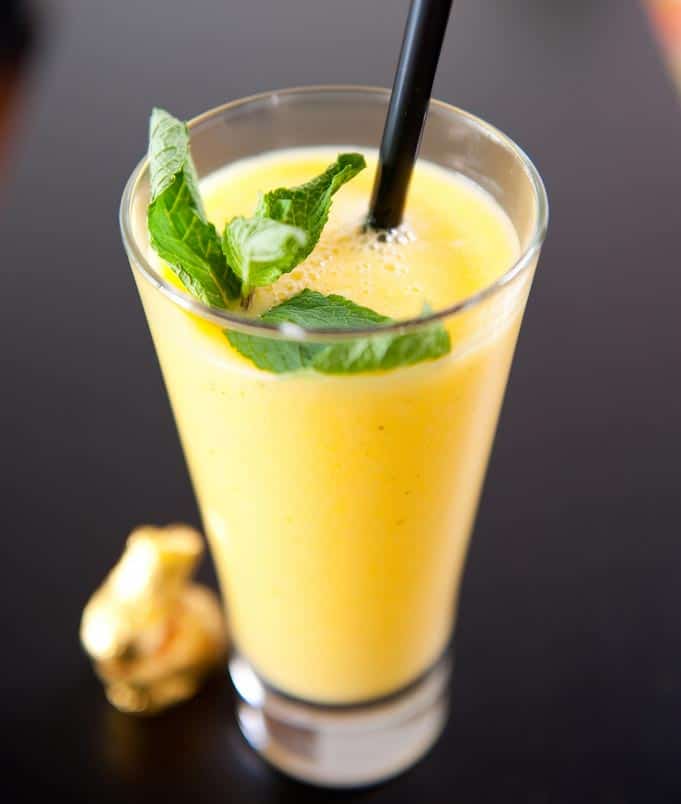 Did we almost have your mind made up when we started talking about the previous idea we showed you where pineapple juice and ginger were combined, but you tried it and you can’t help feeling like something was missing? Well, we’ll admit that we did really like that version, but we also tried this alternative version, just to be sure, and it’s possible that this recipe from ,The Juicing Collection is even better! Take a better look to see how they added mint in order to take the flavour to the next step. 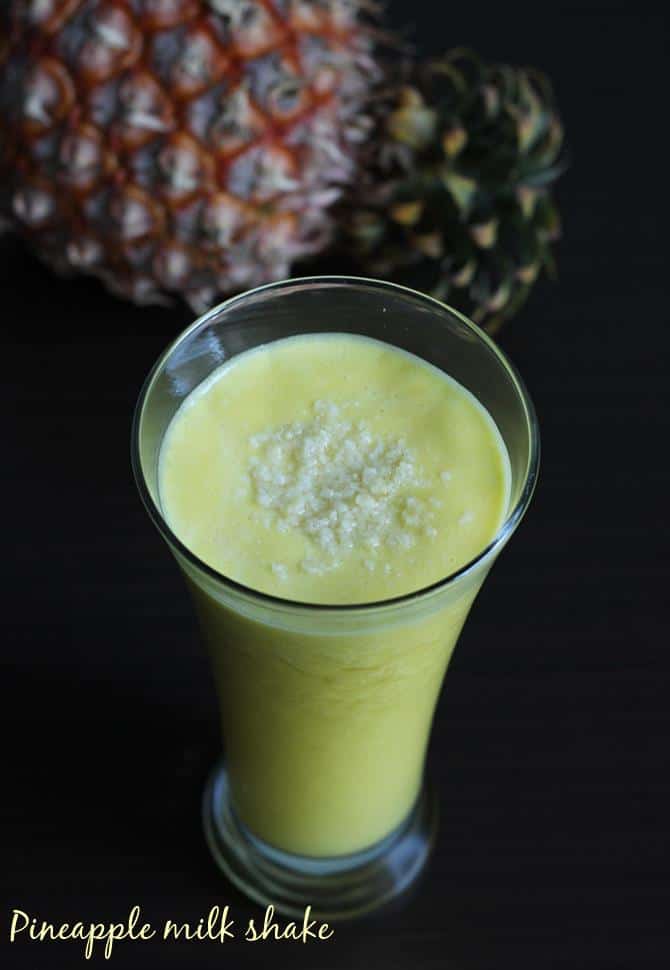 When it comes to ordering milkshakes in restaurants, we usually scan the entire list before choosing, just to make sure we can try the most unique thing on the menu, particularly if there’s a flavour that we’ve never seen before anywhere else. Even in places that do have really creative flavours available, however, we have trouble finding pineapple just about anywhere! We’ve tried plenty of pineapple smoothies, but they’re just not the same as that blended ice cream treat we love so much. Imagine how excited we were, then, to stumble across this fantastic homemade pineapple milkshake featured on Indian Healthy Recipes! 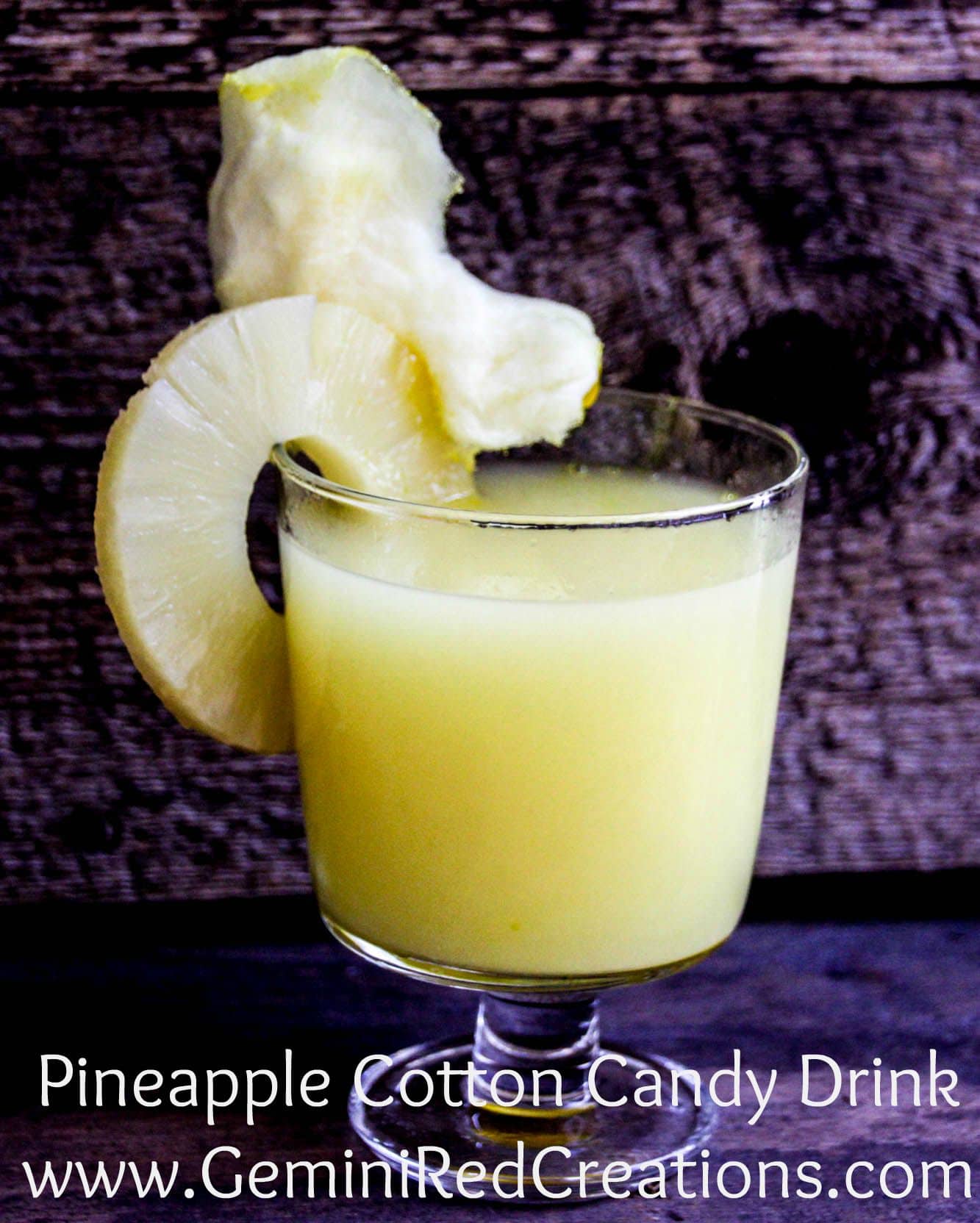 When you started scrolling through this list and hoping to find something really unique, did you actually have your fingers crossed for something quite sweet? Well, we’re not sure many people would really think to combine pineapple and candy in one place, especially when we’re talking drinks, but we’re pleased to show you that that’s actually precisely what Gemini Red Creations did here when they developed this mouth watering pineapple cotton candy drink! 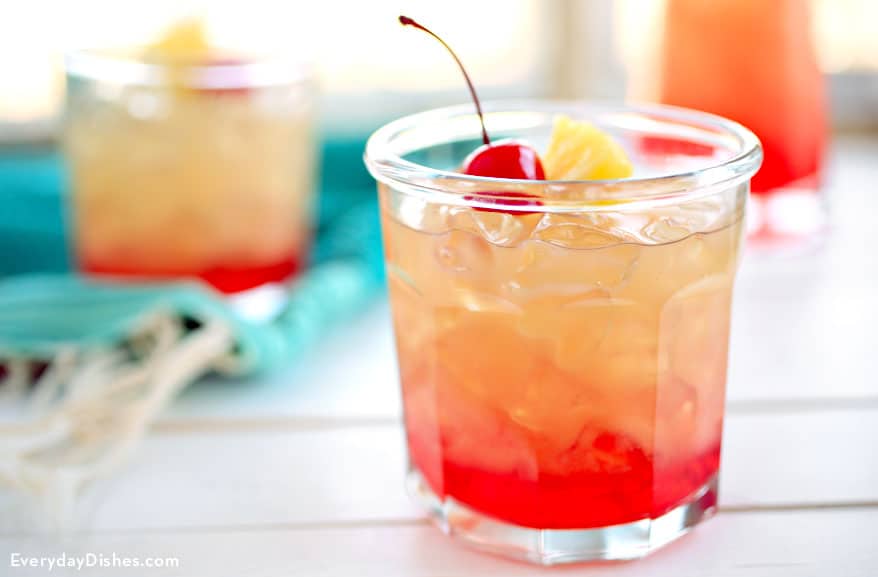 Despite the fact that fall is here, are you still dreaming of all the delicious lemonades you tried in restaurants with your friends or made at home yourself throughout the season, maybe even considering making yourself more since the fall has kicked off so warm where you live? In that case, we’d definitely suggest taking a look at how Everyday Dishes made this very yummy pineapple cherry lemonade that really is just as refreshing as they say it is. 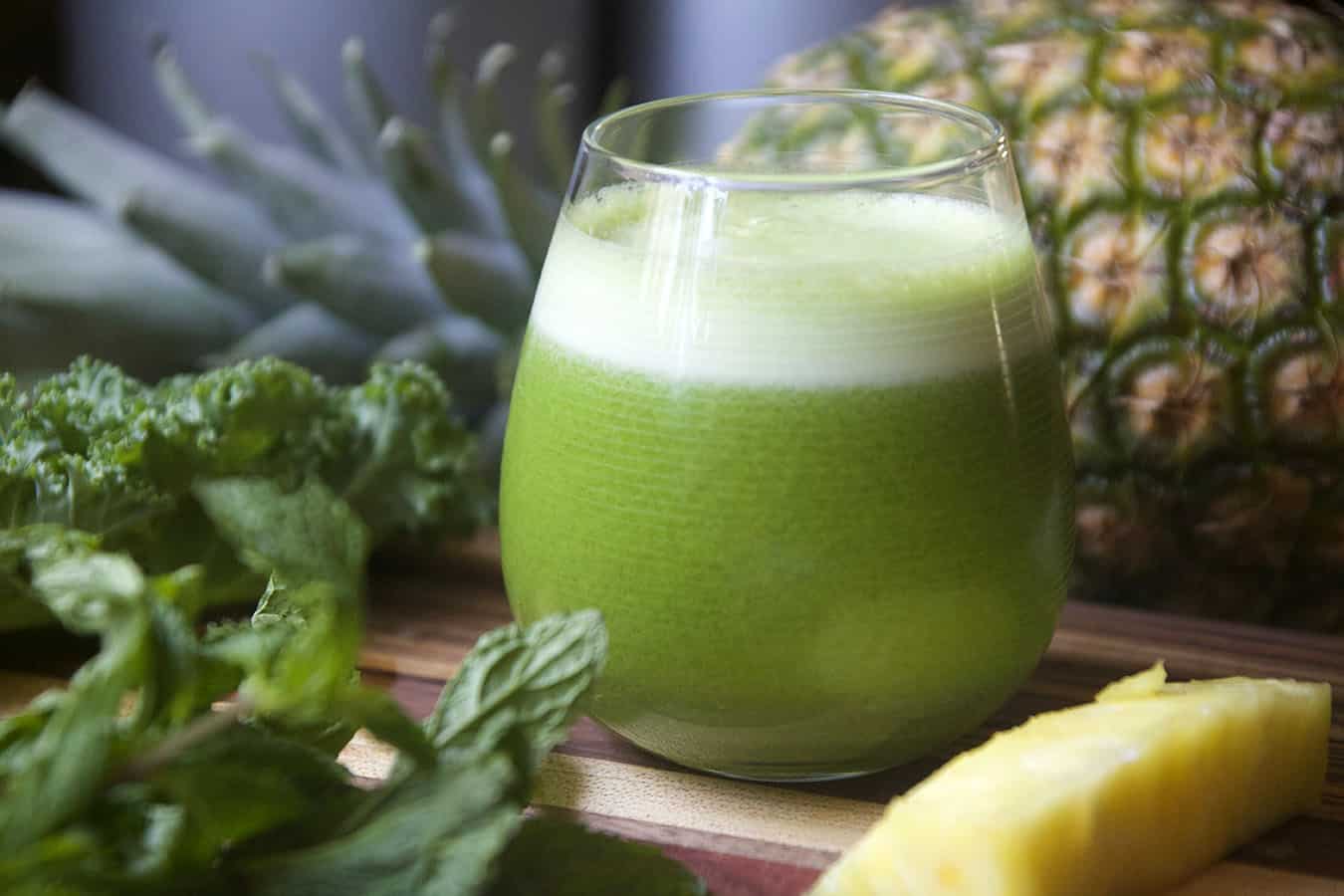 Have you actually been a huge fan of the juicing fad lately because, even though you don’t use it as a risky meal replacement like many people started doing, you do find it helpful for getting a whole day’s worth of fruits and vegetables into your tummy in a much yummier way than you’re used to? Then we have a feeling this delicious green pineapple juice featured on The Pescatarian and The Pig might be right up your alley! This way, you get all the nutrition of the leafy greens, but all you taste is the pineapple you love so much. 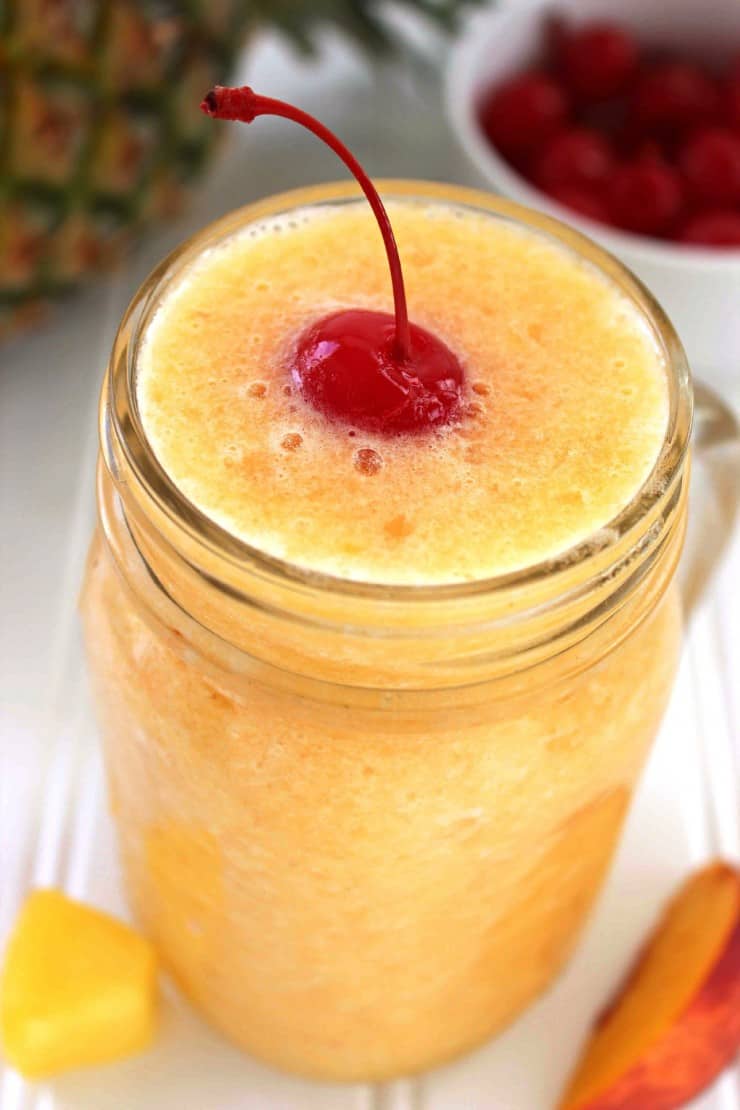 Did we kind of catch your attention when we started talking about the various kinds of slushies and frozen drinks we’ve already shown you because you really like the idea of making something very refreshing and cold, but none of those flavour combinations have quite spoken to you so far? Then here’s another alternative for your consideration! Check out how Life, Love, Liz made these super refreshing peach pineapple tropical slushies that just taste like summer!

Do you know another pineapple enthusiast who loves getting creative with ways to enjoy their favourite flavour in the kitchen but who has been feeling like they could use some inspiration and guidance lately? Share this post with them to give them some exciting new options! 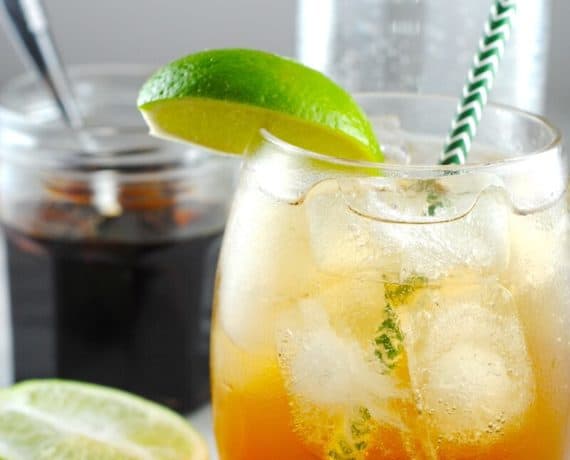 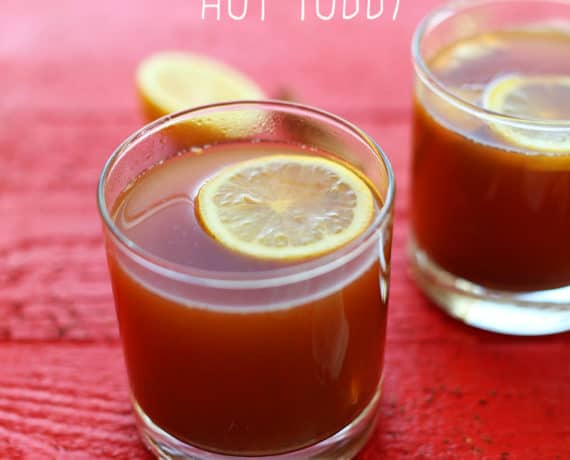 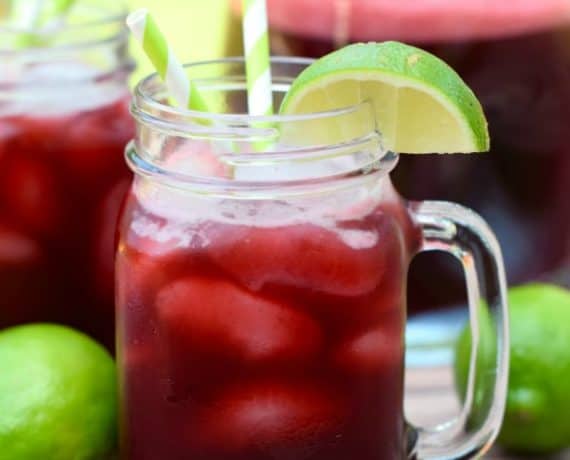 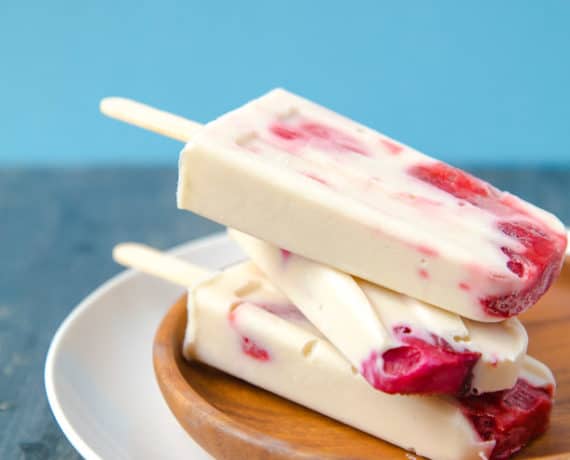