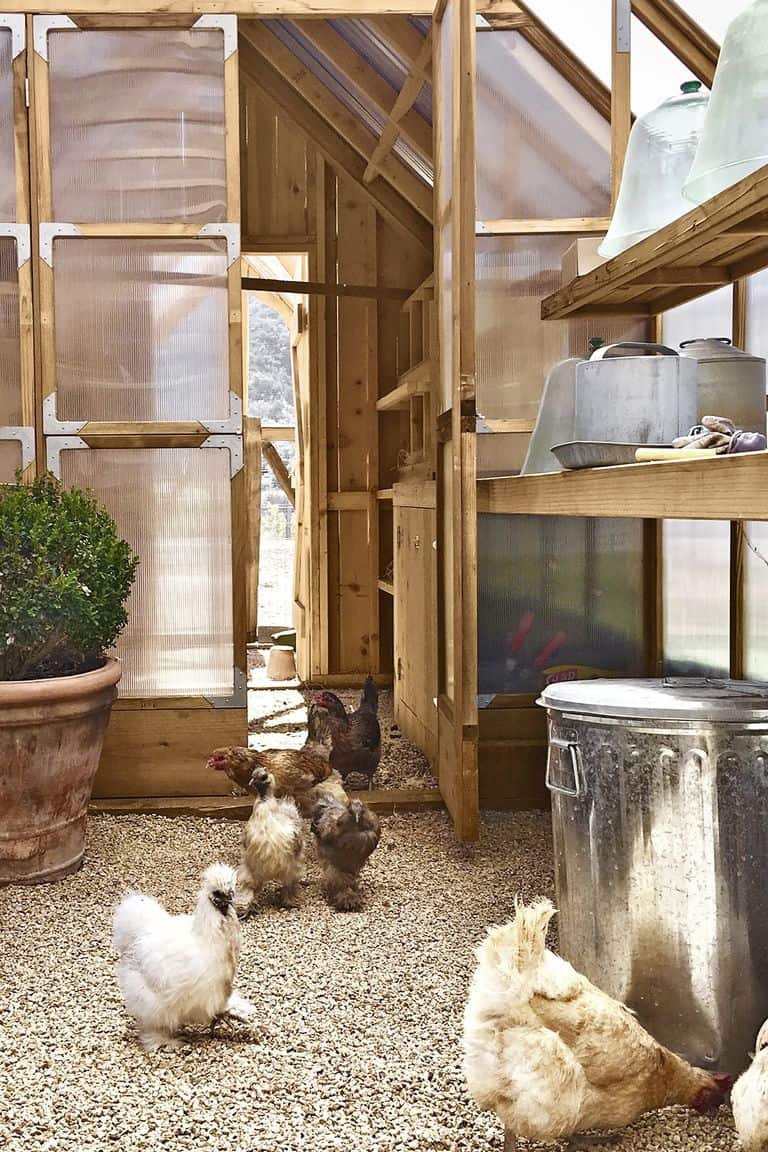 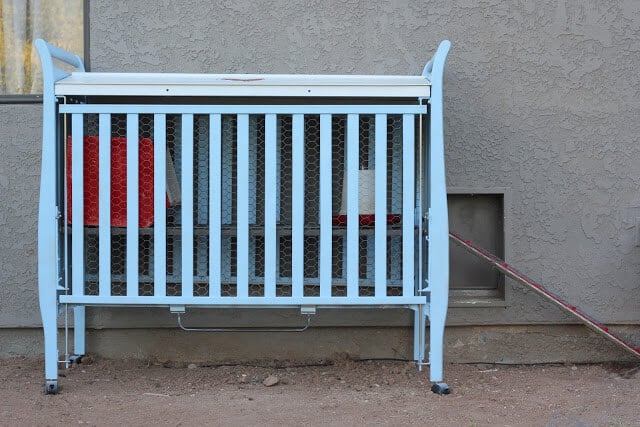 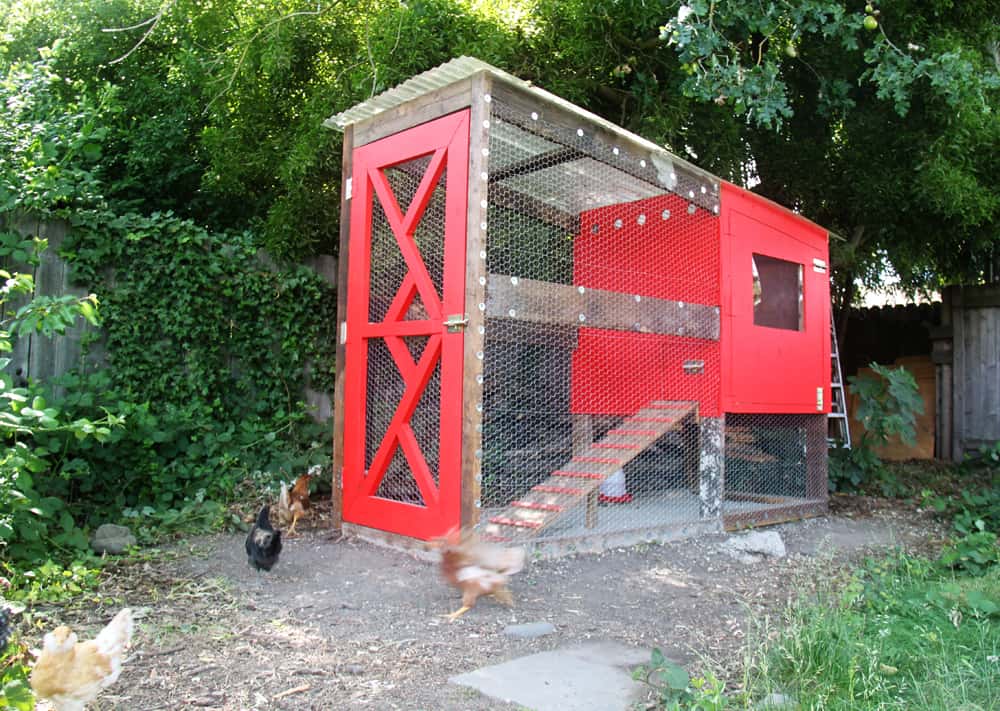 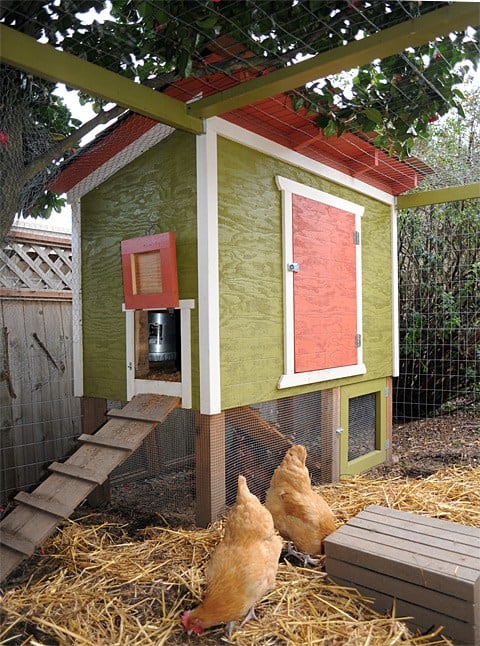 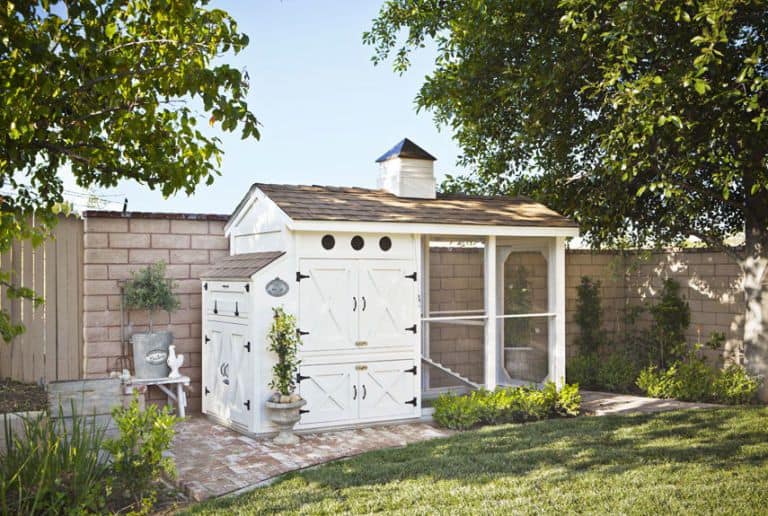 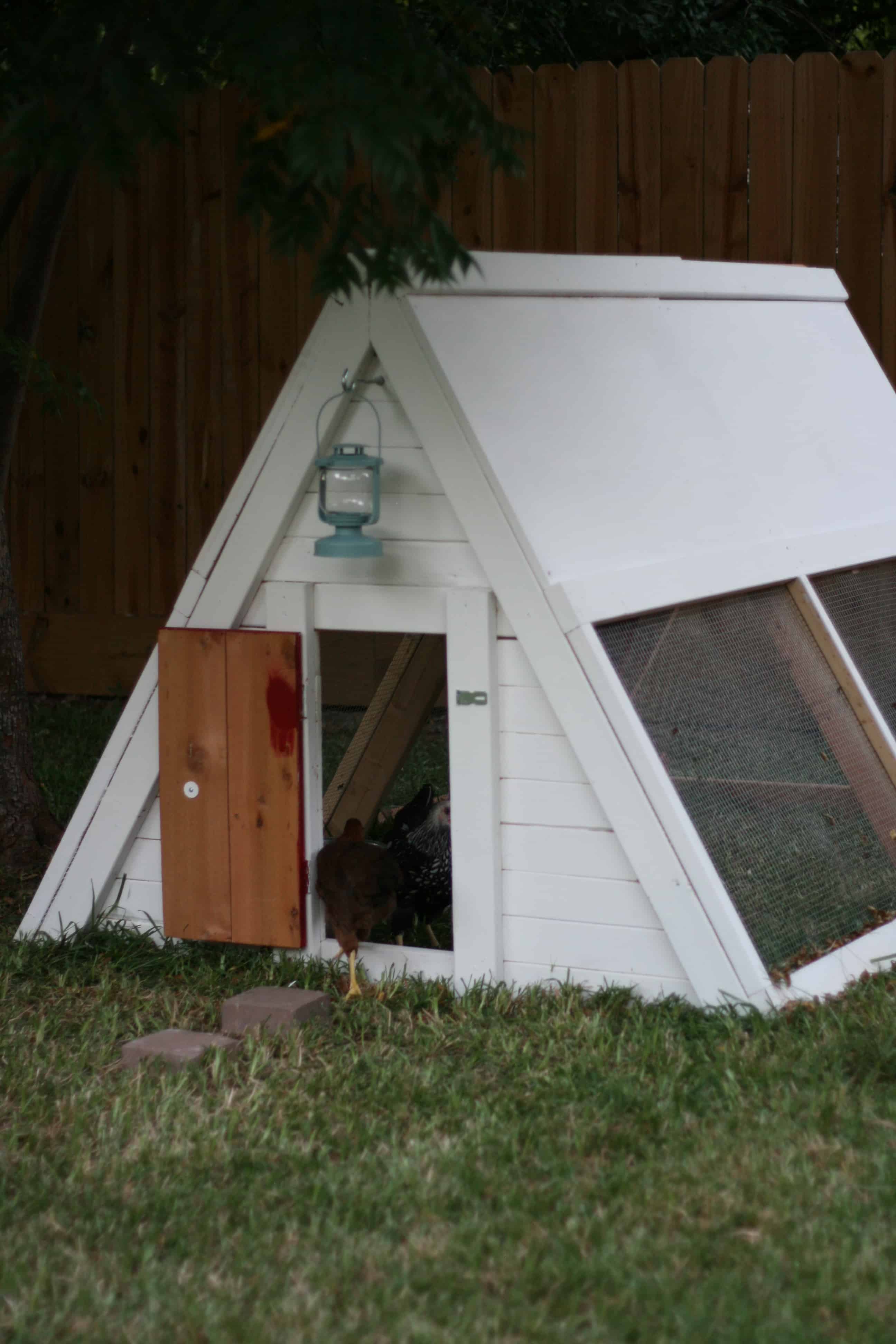 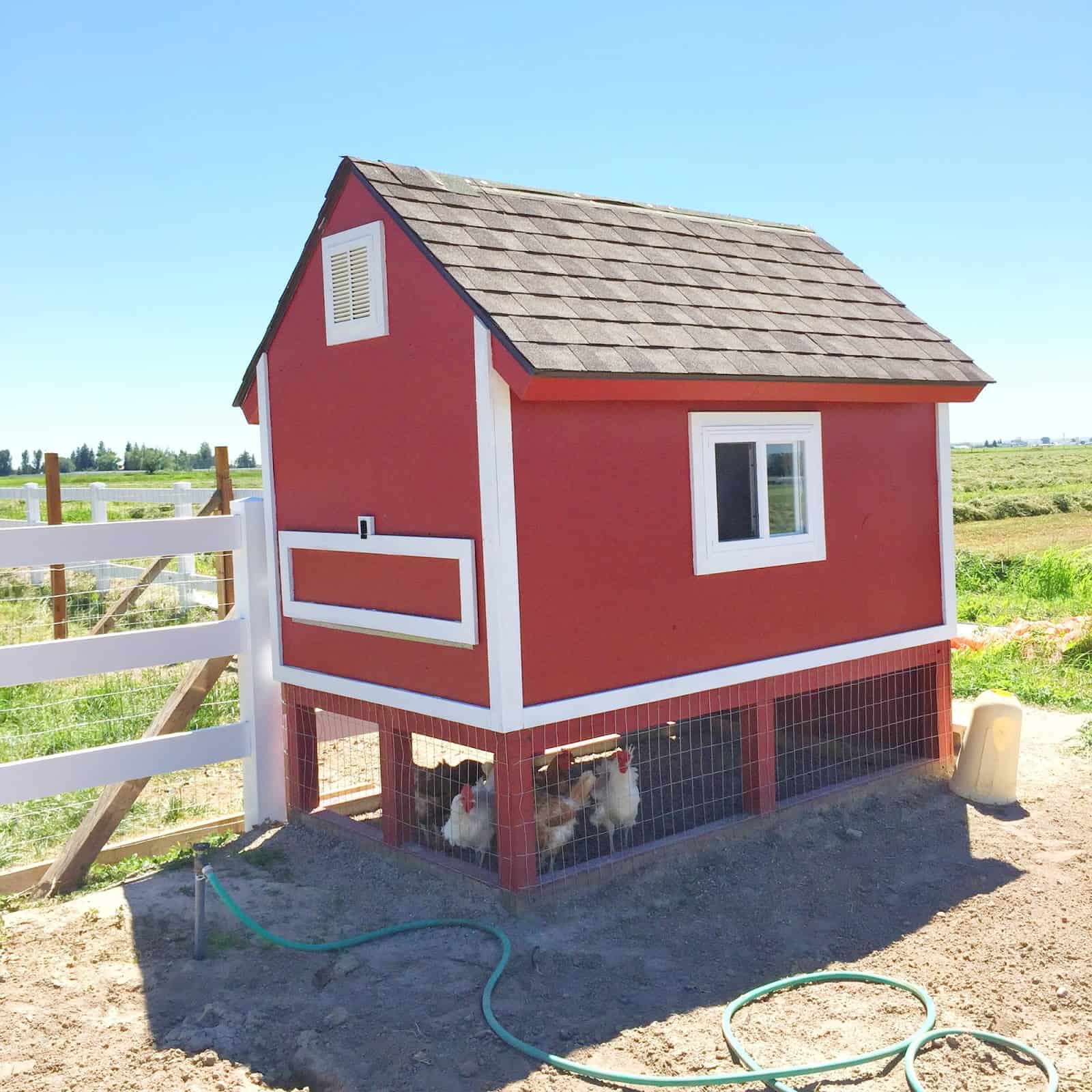 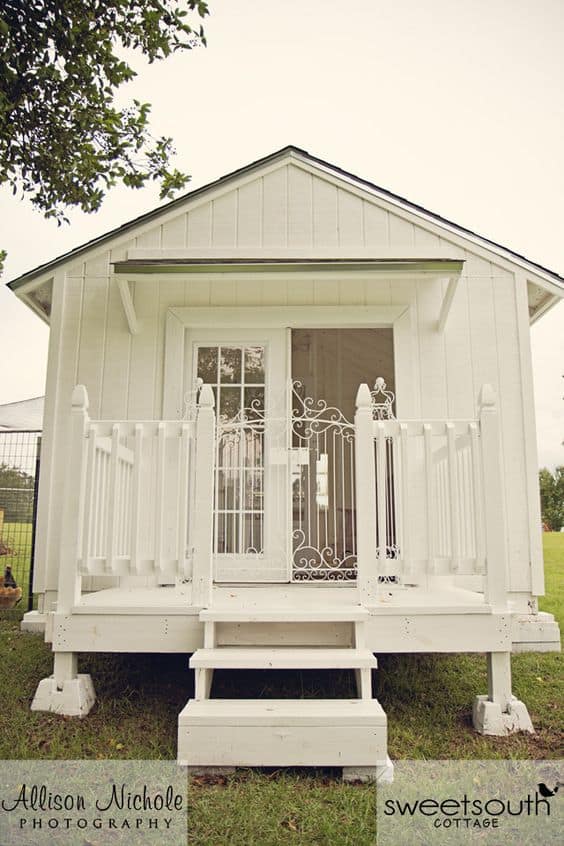 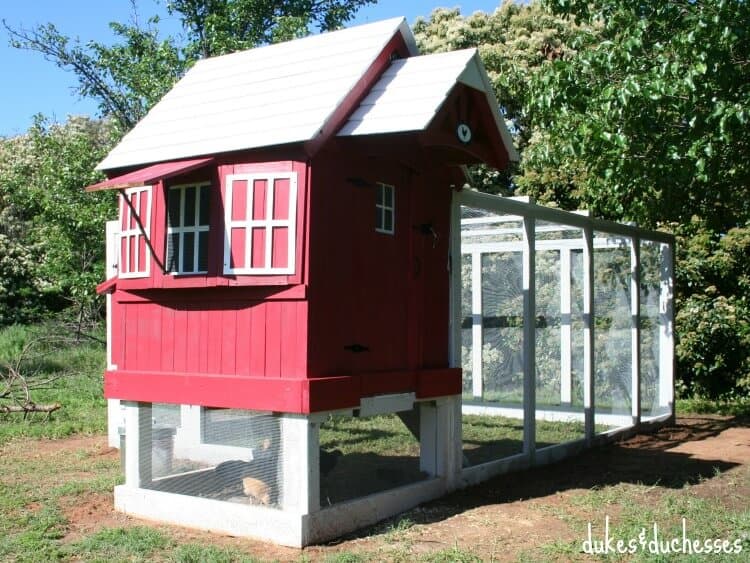 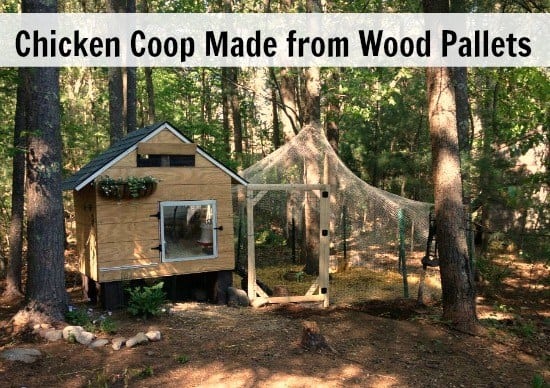 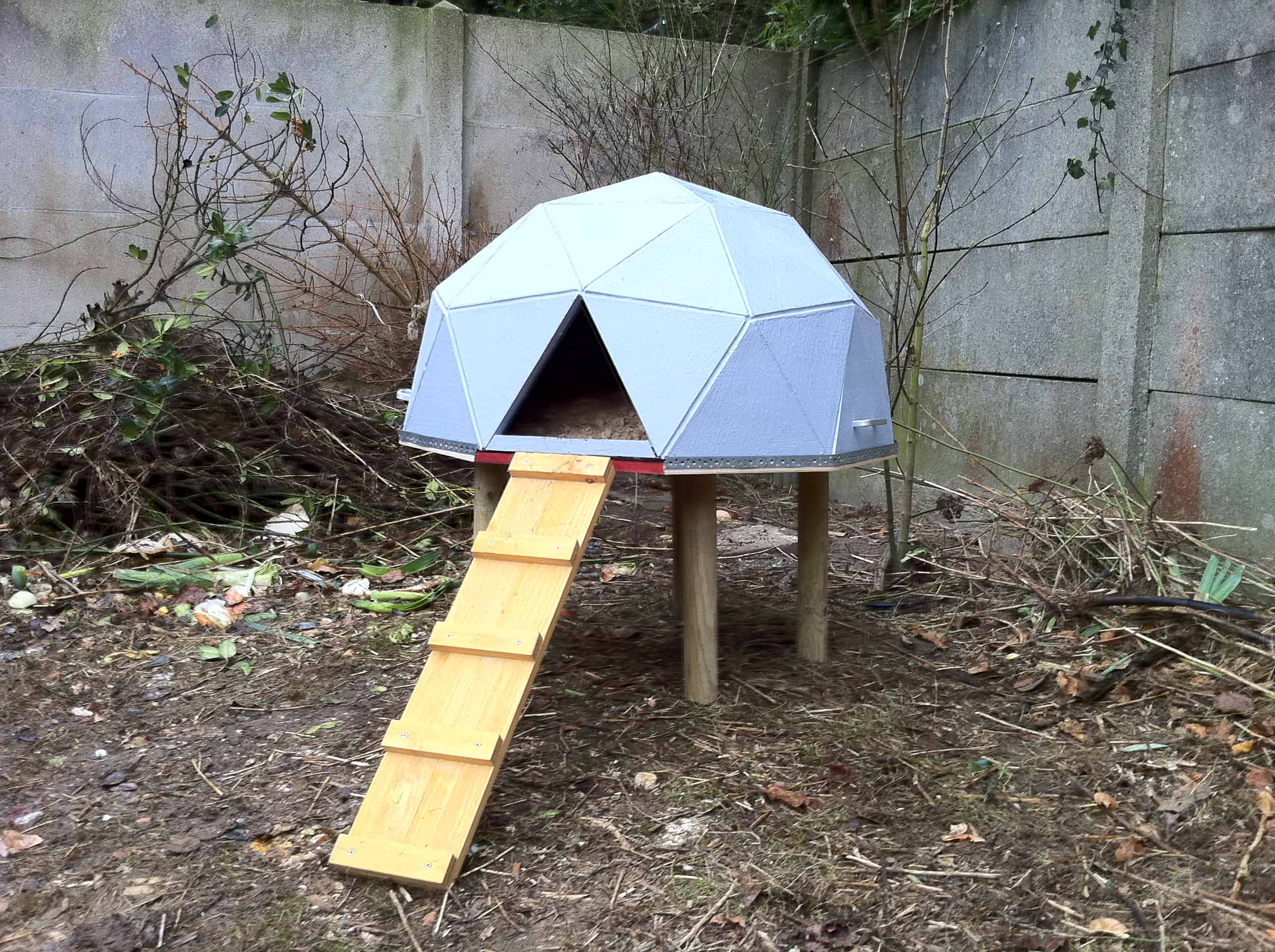 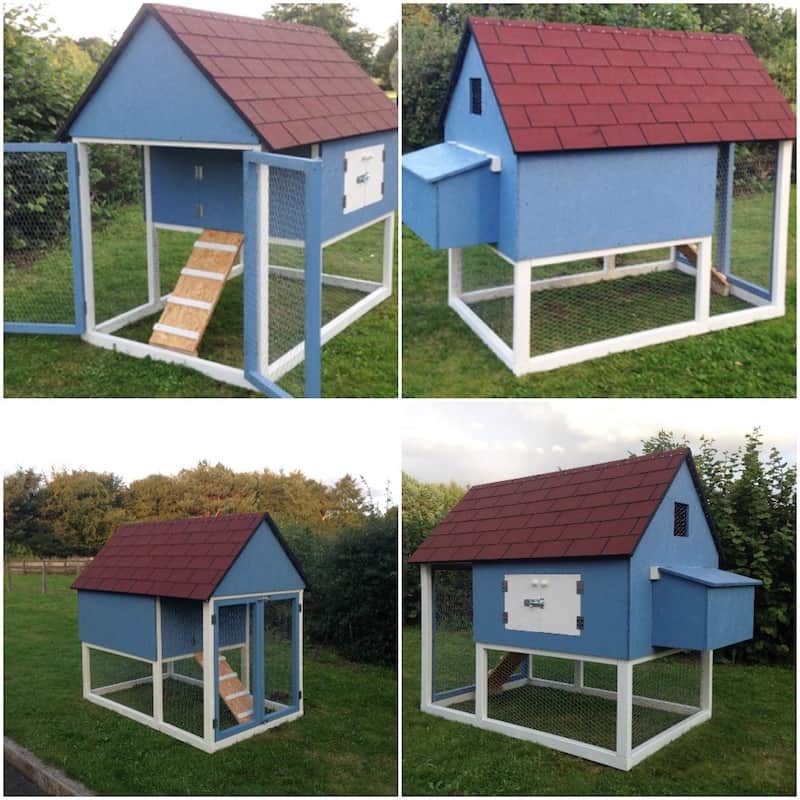 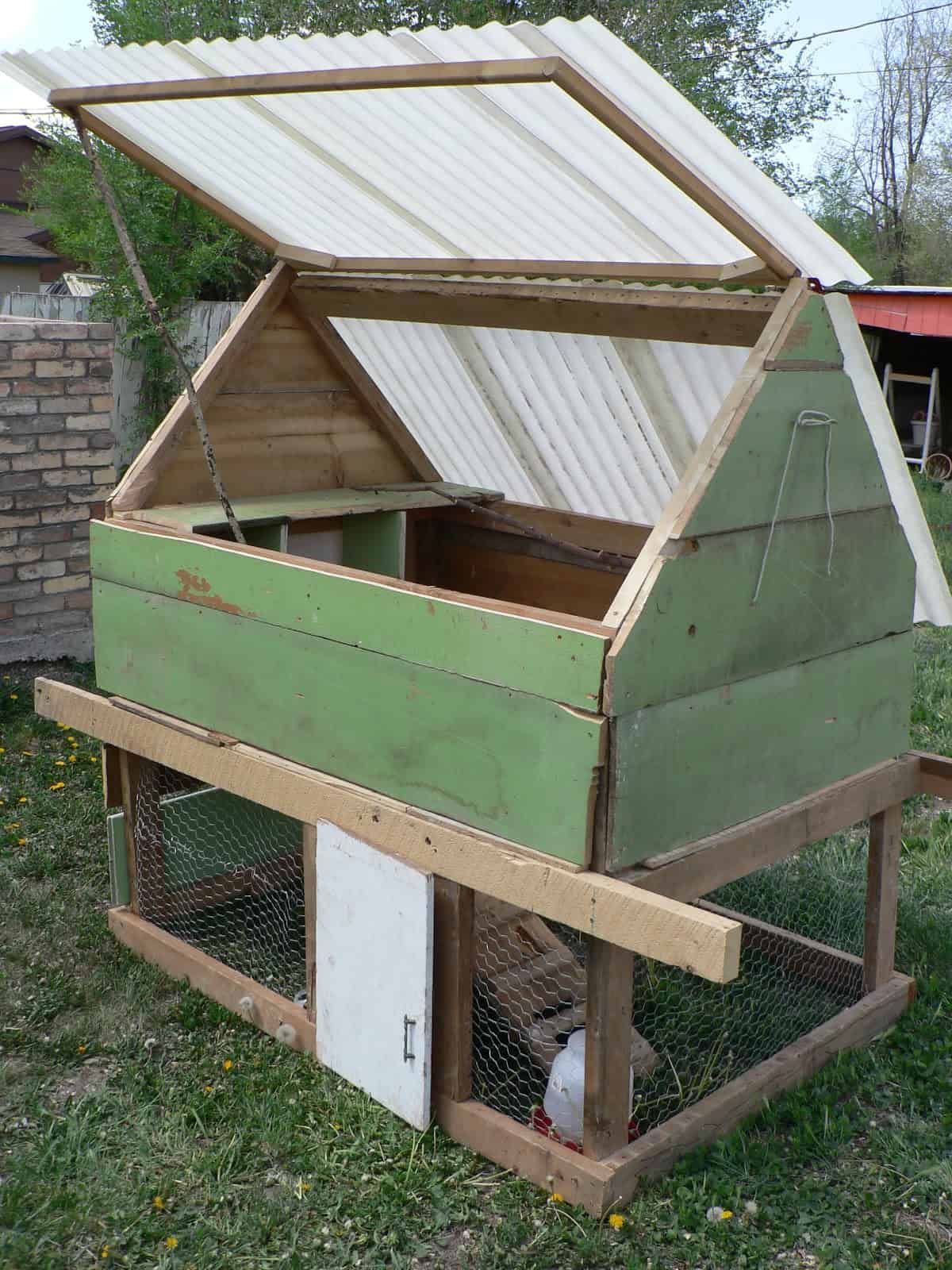 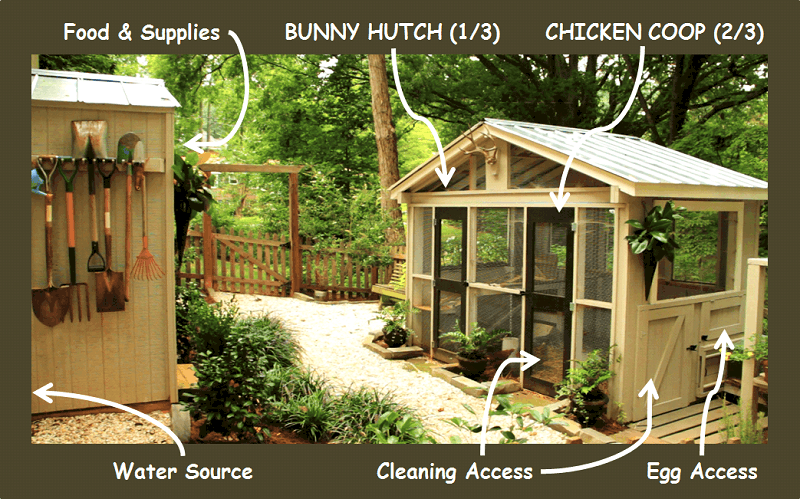 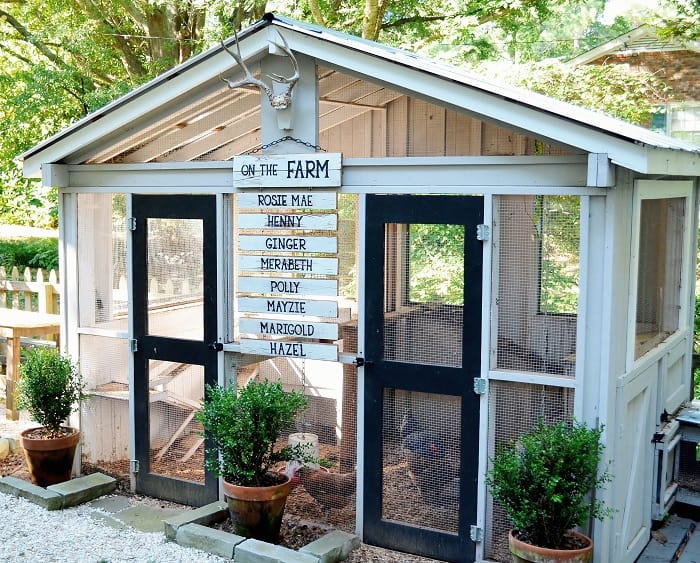 Now that spring is here, are you ready to take the next step in your smalltime home hobby farming endeavours? Well, we have no doubt that you know just as well as we do the amount of research it takes to successfully raise and house chickens but what about the actual coop itself? Sure, there are plenty of supplies and versions that you can buy in stores but we always feel more confident and satisfied when we’ve made something as “from scratch” as possible ourselves! That’s why we’ve had our eyes peeled for fantastic tutorials that will  guide us step by step through the process of making all kinds of different chicken coop styles, depending on your space, the number of chickens you’ll raise, and the aesthetic you’re aiming for in terms of how it looks in your yard.

1. Chicken hut with its own fenced yard

Are you you intent on giving your chickens a feeling of as much freedom as possible even though you don’t believe they’d be safe just wandering entirely freely in your yard space full time? Then perhaps you’d do best with a chicken coop actually has its won feeding yard build right into the structure itself! Get the full details for making that happen on Country Living.

Are you actually looking for something a little more innovative and upcycled because that’s your favourite kind of piece to create but you still want to make sure that the very few chickens you’re getting will be comfortable, even if the coop is low maintenance for you? In that case, we’d definitely suggest taking a look at the way Weed ‘Em and Reap repurposed an old baby’s crib into a chicken coop!

Even though it’s just a chicken coop, have you actually been feeling pretty intent on making yours something that will actually be quite appealing sitting there in your yard when you have friends and family coming in and out? Well, particularly if you always love a pop of colour, we think you’ll get a real kick out of the way Small Friendly made this fantastic coop using repurposed wood and bright red vinyl!

Just in case the style you were picturing in your head was something a little more modern, as though your chickens might actually be a city flock of some kind, we’d suggest checking out the way The Tangled Nest built this fantastic raised coop that sits up a few feet with an enclosure underneath rather than sitting flat on the ground. It’s also painted in a contemporary way and painted with a pop of colour that makes it resemble a mid-century house a little bit.

If you’re going to invest all of the time and effort it takes to building your very own chicken coop from scratch, would you actually prefer to make it look like a bit of a statement decor piece rather than just a wooden hut sitting in your backyard? In that case, we’d definitely suggest taking a look at the way Country Living outlines the steps for building this stunning Cape Cod inspired chicken cool!

Are you actually only planning on raising a very small flock of chickens so you’re hesitant to over commit to the handy skills that are involved in building a very large chicken cool? Perhaps you’re just worried that some of these larger, more ornate ideas won’t really work in your tiny yard. In either case, we’d absolutely suggest taking a look at the way Coop and Home built this adorable little tent style chicken coop that almost makes it look like your chickens are going camping!

Were you actually really intrigued by this concept of building a raised chicken coop because you like that it not only provides your hens with a space to spend time in the fresh air without roaming free, but also because it provides them with a bit of shade? Then we have a feeling you’ll get a real kick out of the way A Vision to Remember outlines the process for making it happen in detailed steps that make it feel surprisingly simple.

Are you actually feeling totally enamoured with the idea of making yourself a chicken coop that’s so well decorated and put together on both the inside and outside that i actually almost looks more like a decorative dollhouse, despite the fact that it’s fully equipped for the comfort and health of your hens, but the Cape Cod inspired concept just didn’t quite convince you? Then perhaps you’d get along a little better making a coop that’s efficient but styled beautifully like a little country cottage! See how it’s done in more detail on Sweet South Cottage.

9. Chicken coop from a repurposed playhouse

Are you absolutely open to the idea of making at least part of your coop’s main frame yourself but you’re also wondering whether you can’t perhaps use another kind of pre-built structure as a starting place, just so you have some kind of guide to begin with? In that case, we’d absolutely suggest taking a look at the way Dukes and Duchesses started out by upcycling a playhouse and built a stilted area and additional screened yard underneath and around that.

10. Pallet chicken coop with an enclosed side yard

Were you quite intrigued indeed when we mentioned the idea of making a chicken coop from upcycled pallet wood but you’re convinced that you could handle a project that’s a little more impressive and hand’s on in its structure? In that case, we’d absolutely suggest taking a look at how One Hundred Dollars a Month made his fantastic pallet coop that’s built complete with its own side yard.

Have you actually been scrolling through our list and thinking about how you can’t get enough of the smaller, more stylish looking chicken coops because you plan to keep your flock very small and you’d love to make a coop that adds a little bit of style or novelty to your backyard space? Well, if modern and geometric shapes appeal to you at all then we think you simply must take a look at the way Anthony Liekens made this fantastic chicken dome!

12. Raised chicken hut with a mini yard underneath

Perhaps you’ve been thinking a lot about how much you enjoy the idea of a raised coop that has its own little shady yard underneath because you like how it saves space but you’re not sure you need all the additional yards and things that the other tutorials with these instructions have shown you so far? Then maybe you’d get along a little better with this more simplified tutorial featured step by step on The Happy Chicken Coop!

Just in case you’re still interested in making yourself a smaller coop with an under yard but you’re not a huge fan of the idea of bending down to do most of the cleaning, here’s an idea that might make things a little bit easier! Bless This Mess guides you step by step through the process of making a coop that has a lifting top so you can reach right inside.

If you’re going to make yourself a homemade chicken coop because you plan on doing some actual hobby farming, why not make yourself a whole multi-purpose area and station that your chicken coop can be a part of? That’s precisely what Redeem Your Ground did here with their shed, gardening station, and chicken coop all positioned and coordinated together as one useful area.

Just in case you’ve been scrolling through our list thinking about how these smaller coops seem dark and you’d rather be able to actually enter into the structure with your chickens just to make sure everything is well inside? In that case, we’d absolutely suggest taking a look a how Redeem Your Ground made this fantastic open concept chicken coop that’s big and tall enough for you to actually step right inside with your hens!

Do you know a fellow home crafter and DIY enthusiast who raises chickens and has been looking to make their own coop but who could also use some guidance along the way? Share this post with them so they have all kinds of inspiration and information along the way!

60 Christmas Lawn Decorations to Light Up Your Yard