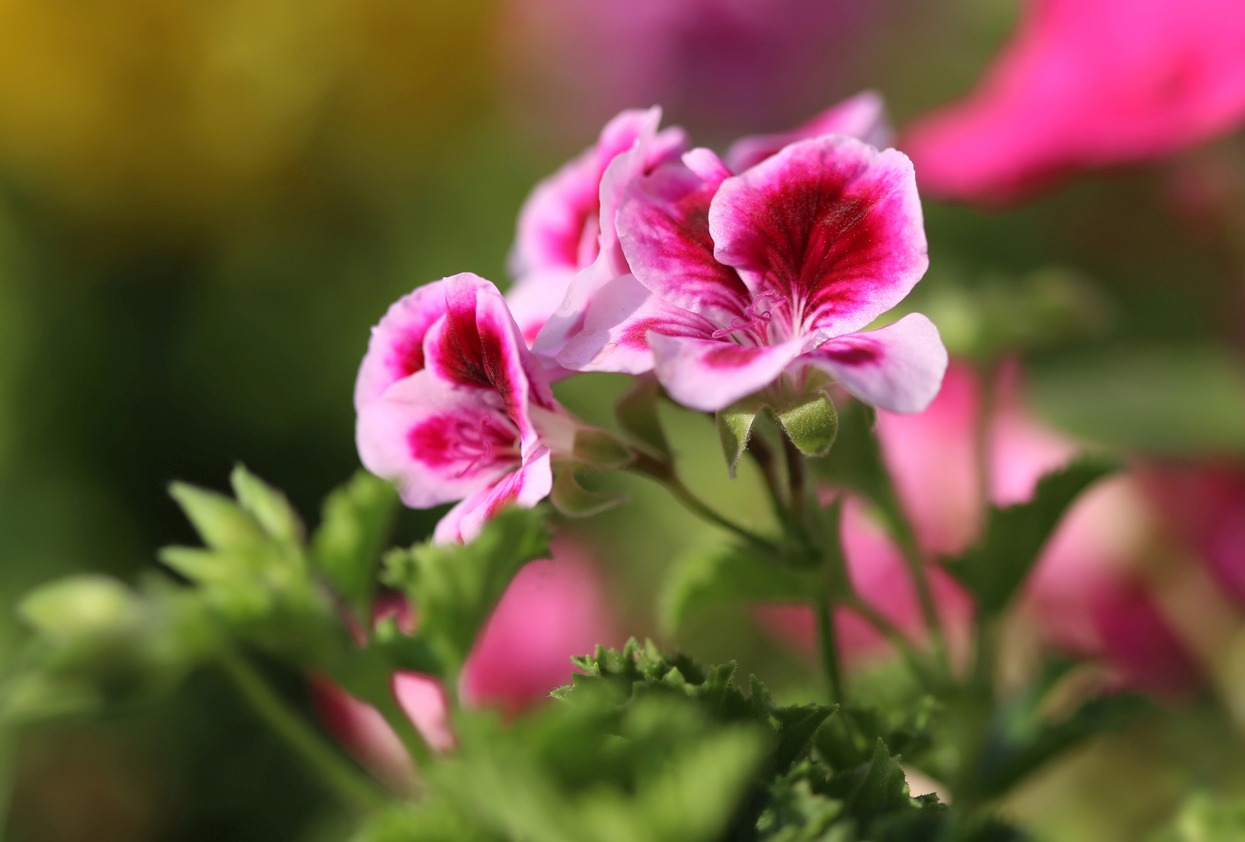 There’s no masterclass for learning how to take care of Geraniums. All the most sought-after varieties in this genus yield colorful blooms and have dense-green foliage that fits compactly inside a hanging basket. The Martha Washington Geranium is a bold variety with velvet petals and copes fairly well under crisp cold conditions. 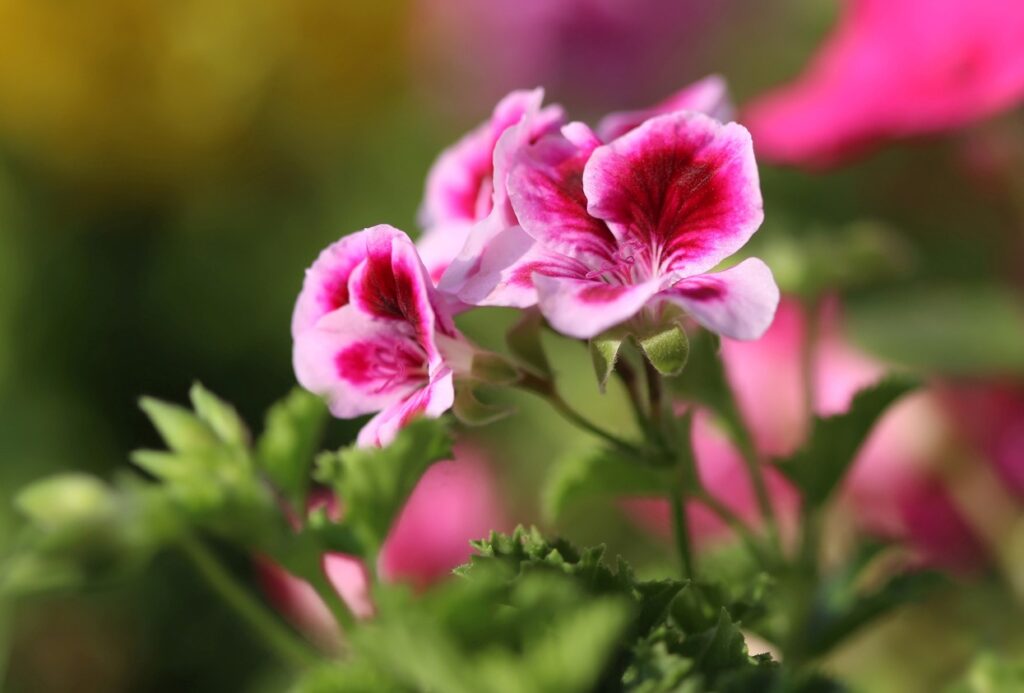 An Up-Close Look at the Martha Washington Geranium

The scientific name for this variety is pelargonium x domesticum. Being a member of the Geranium genus, it makes such a glamourous flowering plant and you can use it to landscape your garden. While the geranium originates from South Africa, it found its path to North America in 1786. Although Geraniums have the traits of annual plants, they can grow even in warmer regions such as the southern coastline of California.

To get the best foliage yield and bloom, you want to wait till late winter or during the early weeks of spring. With USDA hardiness zones 10 through 11, this suggests that you can take care of your Martha Washington using the same nurturing tips for perennial plants. In fact, most adept gardeners overwinter their geraniums till spring when they’re ready for replanting.

Martha Washington Geraniums have petals with a ruffled texture and produce flowers in various shades such as lavender, purple, or pink. The leaves of this garden plant have serrated edges and let out a fragrance that smells like citrus when squeezed.

How Big Do Geraniums Grow?

On average, Martha Washington Geraniums can reach 12 tall, and spread up to 12 inches wide under modest growing conditions. When introduced to optimal conditions, it can reach up to 18 inches tall and 24 inches in width. If you’re living in a warmer region with conditions that can allow this geranium variety to be grown as a perennial, it can even elongate further up to 2” feet in less than a year.

On the face of it, this variety appears to hold so many flowers since they often grow shorter and develop in clusters. When grown outdoors the Martha Washington only blooms once per year and the number of flowers is usually less, compared to when the growing medium is placed indoors.

Geraniums typically grow in nearly all hardiness zones and require bright light, so they can bloom colorful flowers much quicker. But if summer hits hard in your region and the temperatures are constantly high, then it would be ideal to grow them under shaded patios. Direct sunlight ruins the texture of the leaves and makes the flowers turn pale.

While you need to make sure your houseplant gets at least 6 hours of bright light each day, filter the direct rays to prevent the heat intensity from ruining its growth cycle. And it’s pretty normal for this variety to stop blooming flowers during summer when the warmer temperatures kick in, so don’t stress.

But be careful not to entirely deprive it of the natural light since the leaves will begin to droop and wilt. Like most of its cousins, the Martha Washington plant grows best under environments where the room temperature isn’t above 16 degrees Celsius.

Martha Washington Geraniums can grow profusely under normal potting soil or any other soil type, only if the texture is permeable enough to drain water quite well. To improve fertility in the potting mix, you can amend it with organic matter. Once this variety grows big, it would be hard to transplant it, hence we recommend using a fairly large pot and propagating it using tip cuttings from the mother plant.

While most Geraniums add a stunning color scheme to the landscape, growing them in pots is such a solid idea since you can move them inside when it’s winter. If there’s a great need to transplant your Martha Washington plant, the best time to carry out this exercise is during the early weeks of summer when the growth cycle is about to become active.

Geraniums need frequent watering, especially during the growing seasons. They prefer soil that’s gently moist but doesn’t stay wet for too long. When it’s summer, you need to work with preferably three watering intervals per week. Reduce the number of times you water your Martha Washington Geraniums when winter clocks in since the growth enzymes are usually dormant around this season.

A well-balanced fertilizer that’s soluble and packed with all the essential macronutrients would help speed up your plant’s growth. Check out the composition of each nutrient on the description label before purchasing fertilizer for your Geraniums. Look at the numbers and make sure the first one isn’t more than half of the other numbers—here’s an example: 4-8-12.

If it has a high nitrogen concentration, for instance, your houseplant will only sprout lots of leaves, but bloom fewer flowers. All the same, this variety grows rapidly even without using fertilizer.

Grooming this plant is a huge plus since it helps improve its radiance and make it lush throughout the seasons. Deadheading the spent flowers, for example, makes space for newer ones. And this not only helps the plant bloom more flowers but also keeps it from catching diseases that are most often hard to treat.

Geraniums growing in hanging baskets indoors can also grow wild and lose shape, so trimming them quite regularly would be so useful. If the flowers are getting smaller and have weak shoots, this practically means you need to prune your plant.

Pests rarely attack members of the Geranium genus. You might, however, have to deal with fungus gnats which attack the root hairs mostly during winter when the temperatures are freezing. To identify whether your Martha Washington Geranium is suffering from a fungal disease, check for any powdery warts on the underside of the leaves. The leaves might also begin to show some orange or brown spots.

How to Propagate Your Martha Washington Plant

One of the most productive ways to propagate your Martha Washington Geranium is through tip cuttings. And the fascinating fact about Geraniums is they hardly go into dormancy, except for the extremely cold months during winter, so propagating them holds a pretty decent success rate. Make sure the cuttings from the mother plant aren’t too woody and don’t have any significant blemishes.

For this method to work without faults, you need to:

How to Overwinter Geraniums

Too much frost during winter would ultimately kill your plant especially if it’s growing outdoors. And because you don’t want to lose such a sumptuous flowering plant, you can take some strapping measures to make your plant survive through winter and see it bloom more colorful flowers during spring.

One striking thing about geraniums is that they’re able to survive through winter without soil, hence they’re fit for dormant storage. Unlike many other annual plants, they can lengthen their dry period since they have stems with succulent-like attributes. To prepare your houseplants for this season, you need to: