Datura plants have been stirring controversy since the first human stumbled into them growing in the wild. This is evidenced in the contrasting names that were given to them. In some horticultural circles, people lovingly call them the angel’s trumpet. Others, however, blatantly call them the devil’s trumpet. So why would such a beautiful plant as the datura trumpet flower divide public opinion so much? 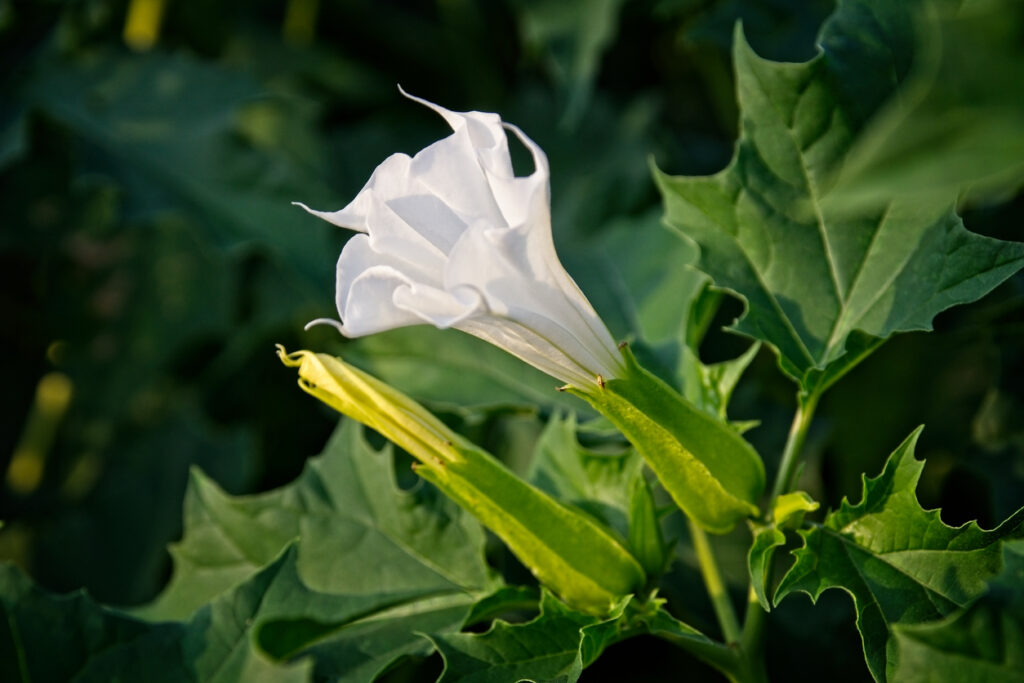 The answer might have to do with its toxicity. This is one plant that you’d want to keep at an arm’s length both literally and figuratively. We’ll get to that in a moment. But for now, you only need to know that this is an exquisitely ornamental plant with mesmerizing qualities. So how can you grow it in your garden, take care of it, and keep yourself and your family safe from its poison? Read on to find out.

Datura Plants at a Glance

A member of the Solanaceae family (AKA nightshade) the datura plant is native to North and South America. Even though it belongs to the same family as tomatoes, peppers, and eggplants, it’s actually closer to other clandestine plants as the mandrake and nightshade. Those last two are poisonous and have played major roles in many political plots and intrigues throughout history.

But toxicity aside, there’s no denying the beauty of the datura trumpet flower. The most distinguishing feature of this ornamental plant is its flower. Shaped like a bell, the flower is about 8 inches in diameter. It can either be white as snow or tinged with pink hues.

A herbaceous plant, the datura grows to about 5 feet tall in the right conditions. It has USDA hardiness zones between 6 and 9. You can grow it in a greenhouse or a conservatory if you live outside of those zones.

Before we move further, we need to set a distinction between the datura and another closely related plan called the Brugmansia. While they belong to the same family and look very much alike, they’re actually different species.

The Brugmansia is actually a tree with a woody stem and lush canopy that grows to about 10 feet tall. It also has bell-shaped white or pink flowers but these flowers face down when they bloom. The seed pods of this plant are often long and smooth. It doesn’t self propagate.

The datura on the other hand is a herbaceous plant that grows between 3 to 5 feet. Its pendant-like flowers bloom facing upwards. The seed pods of the datura are usually round and covered with spines. Because it self-propagates easily, it is considered an invasive plant in some states. Also, keep in mind that some datura species have hallucinogenic properties.

Since it has a long and sometimes chequered history, the datura plant has been cultivated for different reasons throughout the ages. In the past, it used to be grown for its poisonous qualities or for its recreational properties. But these days, gardeners grow it for its bluish-gray foliage and dazzling large flowers. Here are the main varieties which you can grow in your garden.

How to Grow Datura Plants

As a self-sowing plant, the datura trumpet flower produces enough seeds every year to cover a few gardens at a time. You can still grow it from a cutting if you like. When planting it for the first time from seeds, make sure you get the seeds from a reliable source. Here’s what you need to do to start datura plants from seeds in easy steps. 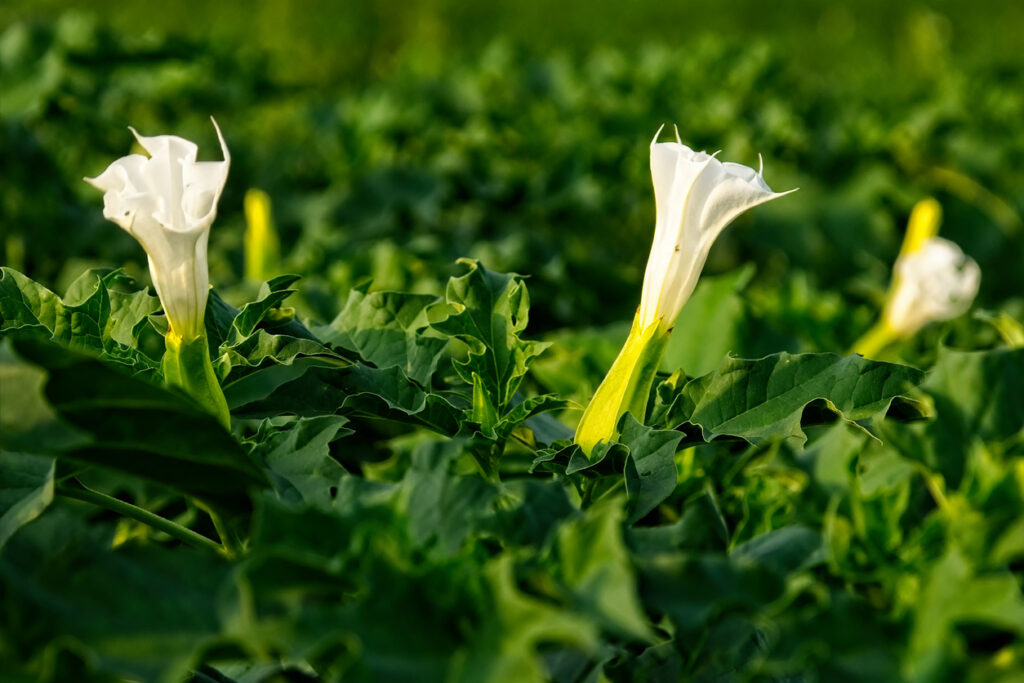 As a tropical plant, the datura trumpet flower needs special care both in the type of fertilizer and watering requirements. And since this is a highly toxic plant, you need to take precautions when handling it.

One thing about hardy plants, they don’t care what type of soil they grow in. This applies well to the datura plants that can establish between cracks in rocks as easily as they’d grow in fertile and well-aerated soil. But just because the datura trumpet flower can tolerate poor soil, that doesn’t’ mean you should grow it in one. This could impact the size and number of blooms the plant produces every year. So opt for well-drained and neutral or slightly acidic soil. Sandy soil or clay won’t suit it well, so mix in organic materials to improve aeration, drainage, and improve the nutrients in the soil.

In the early stages of its life, the datura plant needs a lot of water. You should irrigate it once a day to keep up with its fast growth rates. Once the plants establish, you can cut watering back to once every two or three days. This depends on the weather conditions and type of soil. In the summer, the soil dries up faster and the plant will show signs of stress if you don’t water it frequently. Sandy soil loses moisture a lot quicker than loamy soil or clay. Always irrigate it in the morning and focus the water around the base of the plant to give the roots a better chance at absorbing the moisture before it dries out.

Whether your datura plants bear fruits or not, you still need to make sure the soil has enough nutrients to grow those wonderful and breathtaking blooms. You can use organic compost such as worm castings or rabbit manure compost for best results. If neither is available, you could go with a custom 5-10-5 chemical fertilizer. This one is more suitable for blooming plants since it has less nitrogen concentration. Too much nitrogen in the fertilizer will increase the leaves at the cost of the flowers. Liquid fertilizer is better than granular types since it’s easier to apply and can be diluted to prevent plant burn.

Since the datura plants are highly toxic, you won’t have trouble with pests. The only bugs that seem to have developed an immunity to the toxic leaves are slugs. They crawl over the stems, embed themselves in the middle of a leaf, and start munching. However, they are easy to get rid of. Just pick them off one by one and drown them in a bucket full of water and some detergent.

There are no known diseases that impact this plant either. The only disease that affects it is root rot. The leaves will turn yellow and the flowers droop and might start to fall. These are the same symptoms as drought so check the soil. If the soil is wet, hold off watering until the soil dries out. Improve soil drainage by mixing sand and organic material into the clay.

We mentioned a few times that the datura plants are exceptionally poisonous. That means you have to keep them out of reach both for children and pets. When you handle the plant even if you’re just going to water it, you should wear protective gloves and avoid coming in contact with it. Every part of the datura trumpet flower is toxic. From the leaves and stems to the roots and flowers. This is an ornamental plant that is best admired from a distance.

If you’re growing the plant in the garden, then keep it in a corner and erect a fence around it to prevent pets and children from getting there. The active ingredients in the plant are hyoscyamine, scopolamine, and tropane alkaloids atropine. These are very toxic compounds even if ingested in small doses. You should seek medical help immediately if someone consumes any part of the plant.