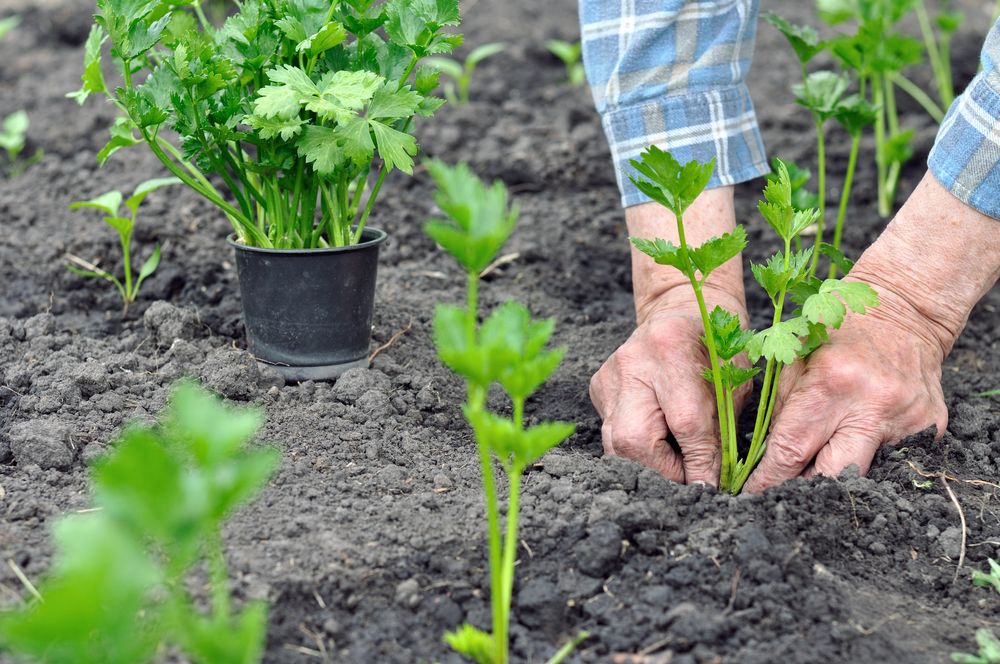 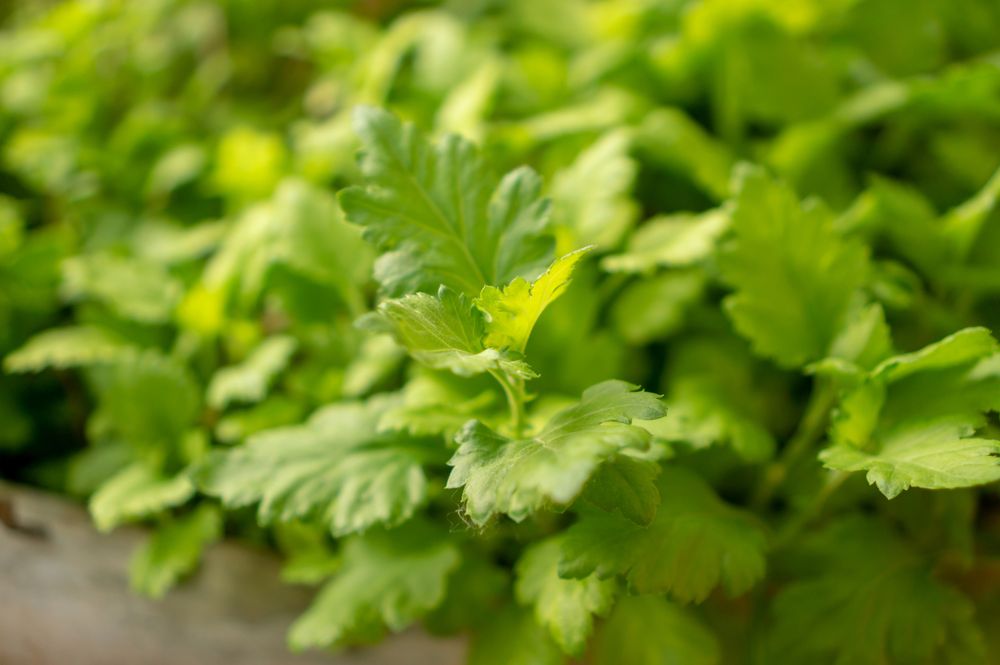 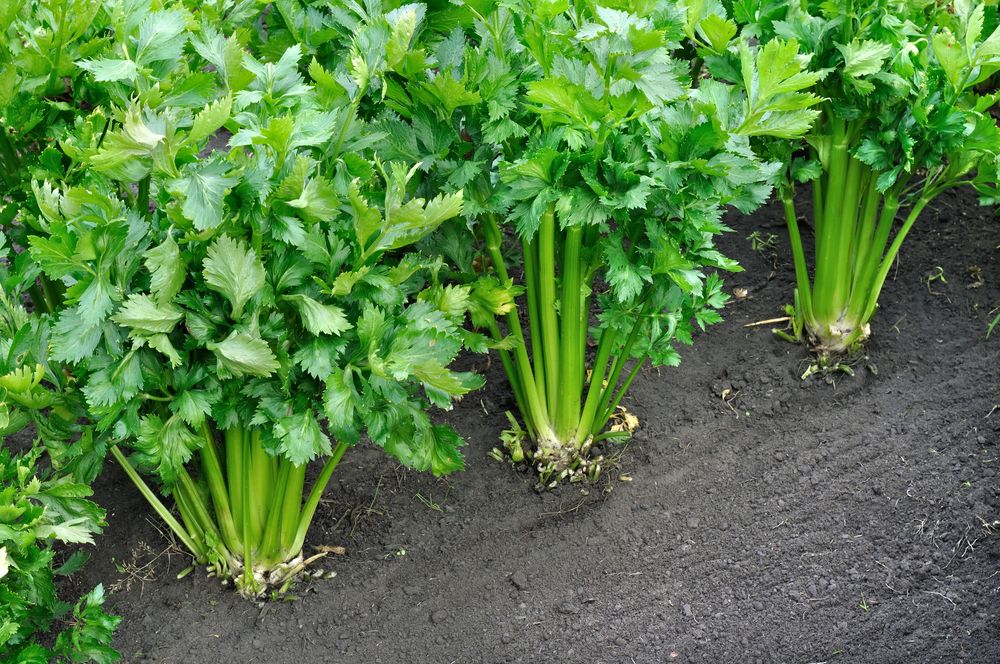 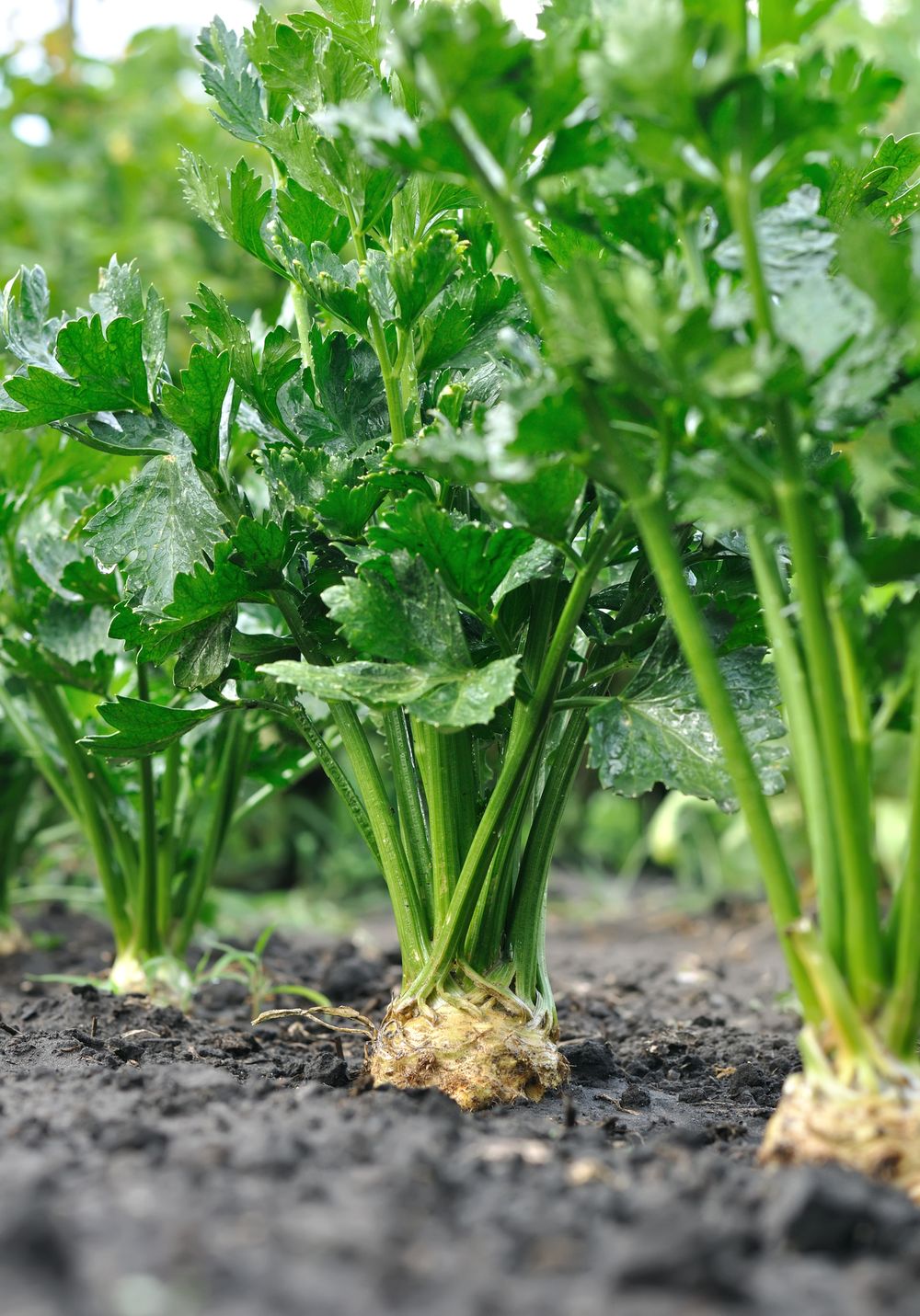 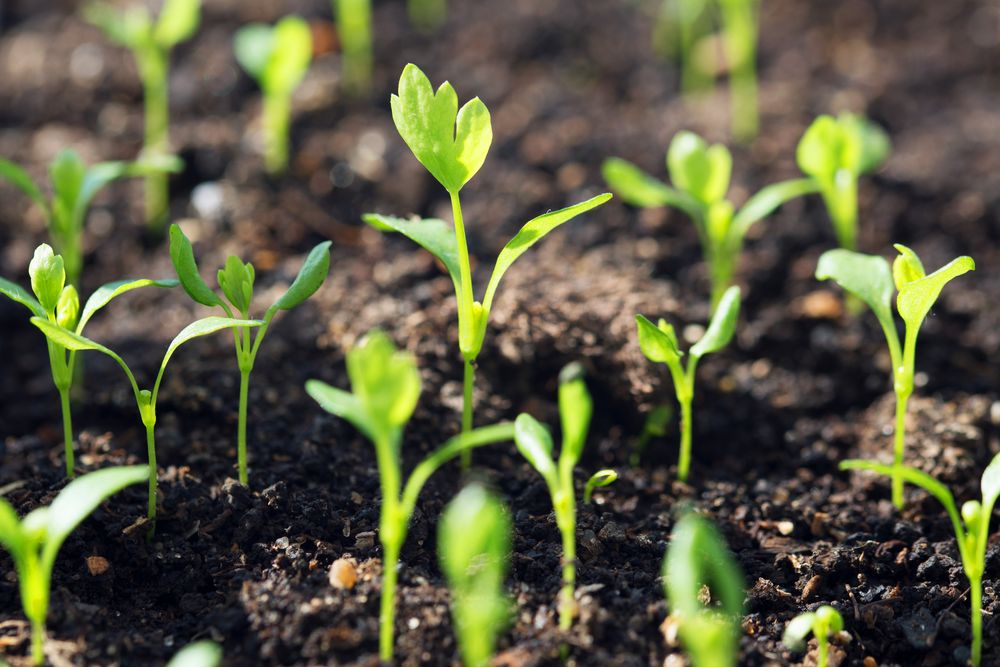 Celery is an often underappreciated vegetable with tons of health benefits. If you want to grow it in your garden though, you might face various issues that might make you reconsider your decision. Don’t worry; we’re here to help you fix the most common problems with growing celery. 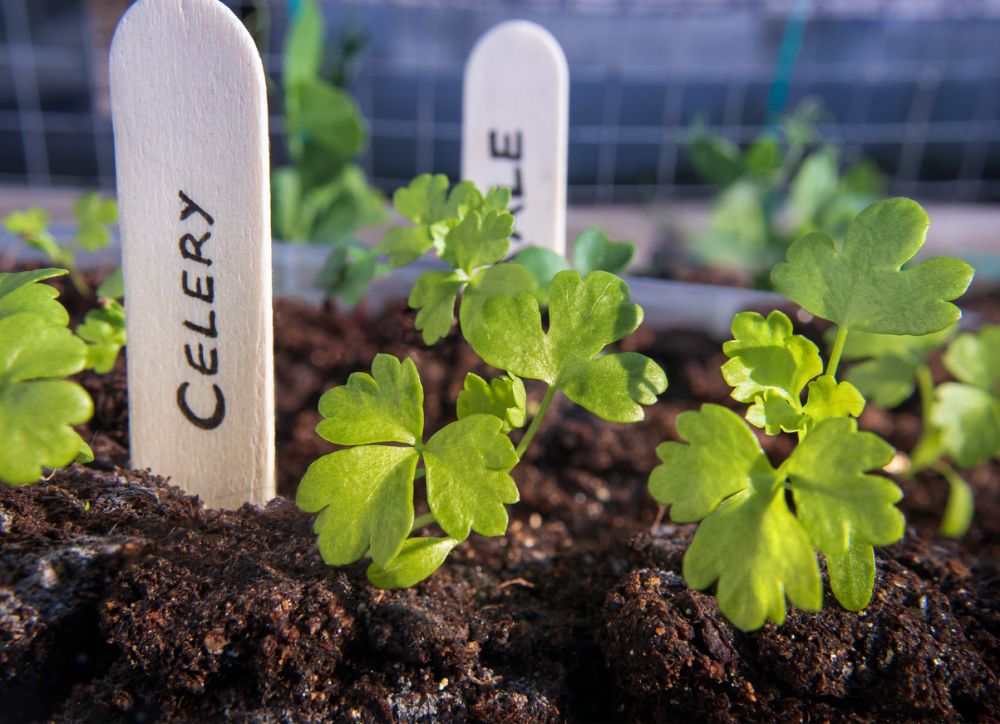 It’s not that celery is finicky or especially hard to grow. Because it’s quite straightforward to start. But what really makes people balk at the idea of growing celery is the number of problems they have to deal with.

The leaves could turn yellow for no apparent reason. Or the stalks taste bitter or turn out to be hollow. The plant is also prone to bolting and the stalks could rot if the growing conditions are not very favorable.

Read on to find out how to deal with these problems.

People are not the only organisms that grow bitter with age. Celery, too, can become bitter if exposed to sunlight right around the time it gets ripe.

But this only happens with the green celery varieties. The stalks start as light green, then that green color darkens, which signifies that the stalks are turning bitter.

The soil pH could also cause the stalks to turn bitter if you let the soil get too acidic or alkaline. As for watering, the juicy veggie has little tolerance for drought.

Infrequent watering would make the stalks stringy and bitter. So how would you keep your celery stalks tender and mild until it’s time to harvest them?

The two factors to watch out for when growing celery are heat and irrigation. While you have full control over how much you give the plant as well as the frequency of irrigation, the weather is totally beyond your control. However, the following tips could help keep your celery from bitter.

Of all the growing problems and diseases that infect celery, blackheart disorder is the easiest one to remedy and prevent. It results from calcium deficiency.

If you have checked the root system of a mature celery plant, you’ve probably noticed how shallow and small it was. It practically spreads a couple of inches under the surface.

This small root ball can hardly do a good job getting nutrients from the soil. So unless the nutrients are within inches from the root, the plant has no way of absorbing them. Hence, the common issue of calcium deficiency.

Calcium is not present in abundance in the soil. And the plant relies on you to feed it well and supply it with all its nutritional needs.

Blackheart disorder is a common problem not just with celery, but with other veggies as well. If you grow lettuce, artichoke, endive, spinach, or radicchio, then you have experienced the disease in one form or another. It starts as yellowing of the tender leaves at the heart of the vegetable.

If you don’t supply the plant with calcium, the leaves will turn black before they rot away.

Since blackheart disorder is caused by calcium deficiency, it stands to reason that you’ll need to use calcium supplements. But you’ll also need to enrich the soil with rotted manure and compost before planting the veggie.

Apply a balanced fertilizer 3 weeks after planting the seeds to encourage a robust root system. You should also keep the soil moist to make it easier for the roots to absorb the nutrients.

Stress due to drought or irregular watering makes the plant prone to growing problems, including low resistance to diseases.

Side-dress with organic compost about three times at a rate of one application every 4 weeks. If the plant still succumbs to the disease, apply a plant calcium supplement. Follow the instructions on the package carefully when applying the plant food supplement.

When your celery bolts, that’s usually the end of your harvest season. As a biennial, celery will spend the first year developing its root system and stalks and leaves. By the second year, it’s ready to flower. And while you can do everything, you can delay that process, sometimes it will happen right under your nose.

Bolting usually means the stalks become stringy and bitter. So you can’t eat them anymore. But even before it bolts, the stalks could turn bitter and stringy due to stress. Heat and drought are the usual suspects. And they’re also the same culprits to look for when your vegetable bolts before its time.

The only time you’d be happy to see flowers blooming at the top of the stalks is when you’re gunning for the seeds of the plant.

To keep your celery from bolting, you’ll need to make sure the plant is not stressed. The main stressors of the vegetable are:

Besides the mild and spicy flavors, the stalks of celery have a satisfying crispy texture. But that’s not always the case. Especially if you’re growing celery in your garden and you haven’t paid much attention to the veggie lately.

At the first sign of stress, the stalks will get stringy. That makes them harder to both cut and chew. And then all that juicy flesh disappears and is replaced with… nothing. The fleshy stalk becomes hollow. It’s like it has become a husk of its former self, literally.

The reasons vary, but they mostly revolve around temperature and water. High temperatures would cause the stems to become stringy. And lack of water will turn those tender stalks into woody and hollow shells. So what can you do to prevent that unfortunate turn of events?

If you haven’t noticed, celery is a rather sensitive plant that likes its humans to wait on it hand and foot. If the sun gets too hot, the soil dries too fast, or the short roots cannot reach the nutrients in the soil, the plant will sulk: the stalks will get stringy and bitter while the veggie bolts.

So to prevent that from happening, you need to take the following steps:

Leaves turning yellow are just part of every plant’s life cycle. But with celery, it’s a different matter. This is often a sign that the veggie is under attack from pests or diseases. It could also be a symptom of stress as the plant grapples with drought, excessive heat, or poor soil.

If the above problems have taught us anything, it’s that celery is the kind of plant that enjoys its comfort and luxury. Deny it anything and it will get stringy and bolt. So if you see the leaves of celery turning yellow, you have to act fast if you want to save your harvest.

As usual, the first place to look for the cause of the yellowing leaves is the soil. Make sure the plant is not dehydrated and that the soil is moist. Then check that it’s getting 6 hours of sunlight and that the sun doesn’t get too hot in the afternoons.

Get a reading of the soil pH and amend it to keep it between 5.8 to 6.8. And while you’re there, side-dress the plant with organic compost and apply balanced fertilizer.

Finally, look for signs of pest infestations and diseases. Some of the diseases that cause the leaves to turn yellow include fusarium yellows, Cercospora leaf blight, and mosaic virus. As for pests, aphids, honey mildew, and wireworms should be at the top of your list.

Since you’re growing celery for its juicy stalks and not for the leaves or roots, then you’ll need those stalks to be in pristine condition when you harvest them. That means you wouldn’t want them to turn stringy, hollow, or rot. This last problem is more frequent than many gardeners would like to admit.

It’s a fungal infection caused by Rhizoctonia solani. Like many fungi, warm and humid conditions invite the spores to nest among the stems of the plant and fester. But it’s not the mature plants. The fungus often attacks the seedlings and speeds up their demise before they have a chance to grow.

Check for signs of infection every time you go watering the plant or when applying fertilizer. This allows you to detect the presence of the fungus early on and prevent the spread of the disease. Remove the infected stems and dispose of them. If the fungus has spread to the whole plant, uproot the celery and burn it.

By the end of the season, pull out all the celery plants and remove any debris. Don’t use the leftovers in making compost or as mulch. Instead, dispose of them safely.

Yes, dogs can eat celery safely. While celery is not a necessary part of a dog’s diet, it can be a healthy snack option for your pup. Just be sure to remove the strings from the celery, as these can cause digestive problems.

Is celery good for you?

Yes, celery is a good source of vitamins and minerals, including vitamin C, potassium, and folic acid. It’s also low in calories and fat, making it a healthy snack option for people looking to lose weight or maintain a healthy weight. Additionally, celery contains antioxidants that can help protect your body against disease.

How many calories are in celery?

A cup of chopped celery has about 14 calories.

Celery is a delicious and nutritious vegetable that can be grown in your garden with a little bit of effort. By following these simple tips, you can have a bountiful harvest of celery to enjoy all year long by dealing with any growing celery problems.

Have you had success growing celery in your garden? Let us know in the comments below!

How to Grow Celery to Enjoy Your Own Crop (Types, Uses, Harvest, and Care Tips)

How to Store Celery to Enjoy It Fresh Longer

Celery Experiment – How to Change Celery Color With Food Coloring