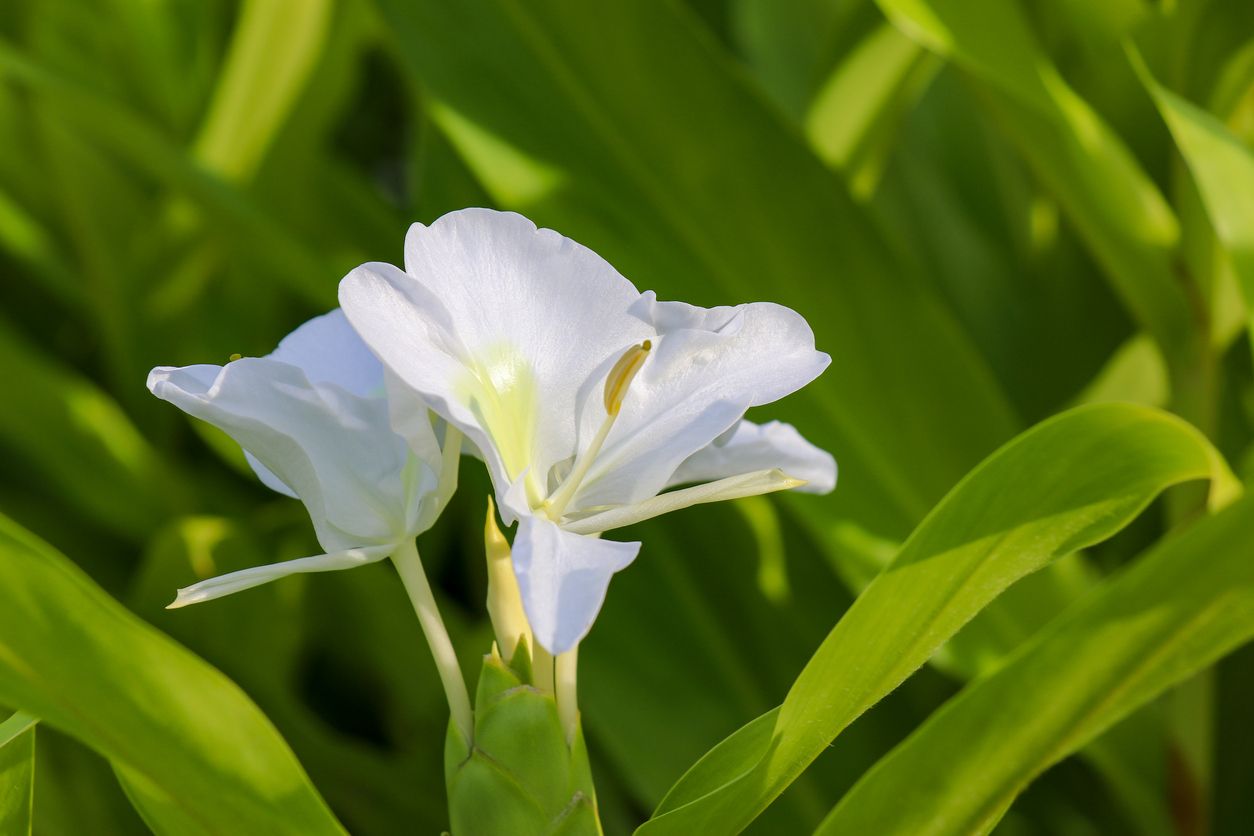 If you have never grown the wonderful butterfly ginger lily before, you’re missing out. This showy lily has an exquisite beauty that shines both indoors and outdoors. But don’t let its tender blooms and delicate disposition deceive you. The hedychium ginger lily is a hardy plant with a high tolerance to cold zones even if it looks just like any other tropical plant to the untrained eye. 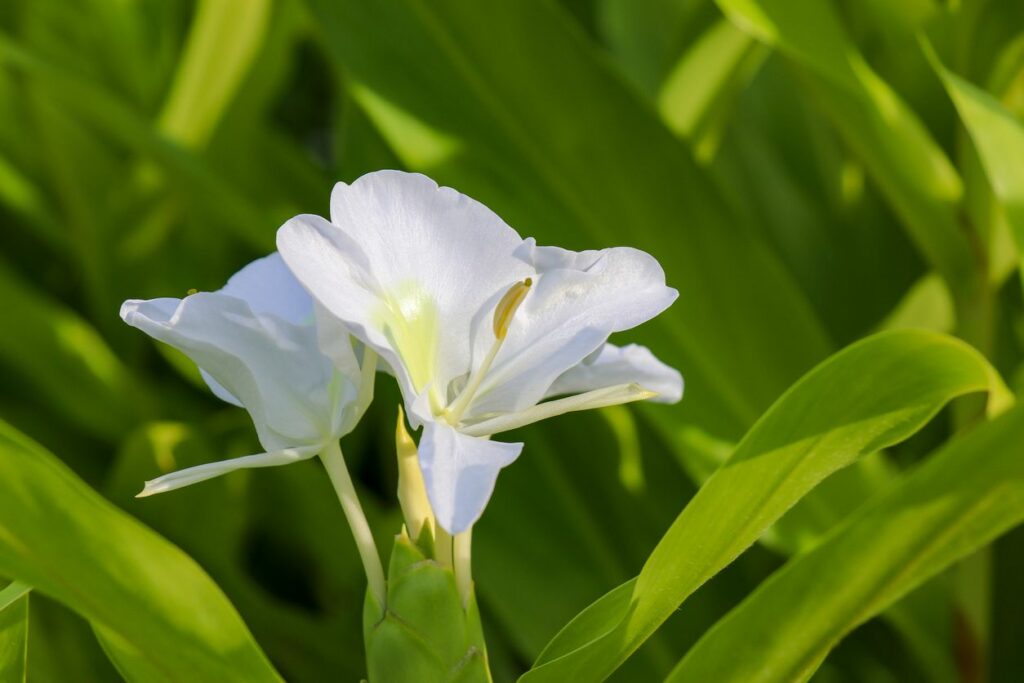 Grow it in your garden and you’re guaranteed to get a litany of pollinators and good insects down for a regular visit. As long as the flowers are in bloom, your garden will become bustling with life and colors. So go ahead and give this perennial flowering ginger a try. Chances are, you’d love the outcome of your not-so-hard work.

All About the Butterfly Ginger Lily

Despite the name, the butterfly ginger lily (Hedychium coronarium) is a member of the ginger family and has nothing to do with lilies. A native of the Eastern Himalayas, it goes by many names including mariposa, white ginger, and butterfly lily among others.

Long before the current popular species was discovered, the butterfly ginger lily was popular as a greenhouse plant all over Europe. But that particular species had a low tolerance to cold weather and as the cost of maintaining greenhouses increased, the plant’s popularity grew less and less. It wasn’t until a botanist named Tony Schilling stumbled upon this hardy species in Nepal and brought it back with him, that gardeners’ love for hedychiums was rekindled again.

With USDA hardiness zones between 7 to 10, the butterfly ginger lily grows well in the southern parts of the country especially in Florida, Louisiana, and Georgia. The mature plant ranges between 4 to 6 feet tall and 2 to 3 feet in width. The green broad leaves are elliptical and grow over 5 inches long and 3 inches wide.

But it’s the flowers that gave the plant its name. In the summertime, flowers bloom white in color and look like butterflies. If you don’t notice the blooms, which is not easy since they are ostentatious enough, the heady scent will alert you to their presence.

You can still grow this perennial plant even if you live in colder zones. However, you’ll need to overwinter it to protect it against frost and freezing temperature.

To add to the delight of every gardener, the perennial hedychium comes in many varieties. Not only does each variety have a unique shape and color, but some cultivars are also designed for resisting diseases or tolerating abrupt changes in the weather better than others. Here are some of the most popular varieties and cultivars.

How to Grow Butterfly Ginger Lily

The butterfly ginger lily thrives in the southern parts of the country where the days are long and humidity levels are relatively high. If you live outside of zones 7 to 10, then it’s better to grow it in containers and overwinter it when the temperature drops in the fall. Here’s how to start this perennial from cutting in containers in easy steps.

With some patience and diligence on your part, you’ll have the butterfly ginger lily growing and blooming in your garden or indoors. As long as you take care of its watering and temperature requirements, you won’t have much trouble with this tropical plant.

When growing the butterfly ginger lily in a container, it’s best to avoid all types of soil and to plant it in a soil-less tropical mix or coco peat. That type of mix has the right texture and acidity levels that don’t cause any damage to the roots while providing the necessary nutrients. However, if you intend to grow it in the garden, then make sure the soil is loamy, rich, and well-drained. This perennial doesn’t like to get its feet wet and waterlogged soil or any other medium is the number one cause for root rot. Aim for pH levels around neutral or slightly acidic. Avoid alkaline soil since this tropical perennial is averse to it.

Far from being finicky or delicate, the irrigation needs of the butterfly ginger lily are for the most part straightforward and simple. In the summer months when the soil dries out fast under the hot sun, you’ll have to water it frequently. The operative word here is frequently. You shouldn’t wait for the soil or the potting medium to dry out completely. This tropical plant has a low tolerance to drought. Your irrigation should be more sprinkling than deep watering. Your goal is to keep the soil moist without getting it soaked. Avoid using mulching since it retains the moisture in the soil for far too long which causes damage to the roots.

For people living in zones 8 to 10, the butterfly ginger lily doesn’t require any special care. In these zones, the temperature is high enough (usually varying between 60 degrees Fahrenheit to over 85 degrees all year round). It’s when the temperature drops below 55 degrees F. that the plant starts to suffer. If you worry about the frost in the winter damaging the plant, you should overwinter it until the next spring. Bring the container inside and keep it in a well-lit area that gets 6 hours of sun every day. Shield the plant from cold winds and frigid temperatures to protect the roots against damage.

If adding compost or any other organic material is discouraged during planting the cutting, once the butterfly ginger lily is growing, it needs a lot of feeding. Even if you start the plant in rich soil in the garden, as a perennial, it will suck out the nutrients in the soil after only a year or two. Experts recommend using a well-balanced 10-10-10 fertilizer in combination with aged manure and organic compost to keep the plant growing and blooming every year. Apply the fertilizer in the spring before the growing cycle and another time in the summer before flowering. Hold off fertilizing the perennial plant during the fall and winter.

Despite its height and widespread growth, the butterfly ginger lily doesn’t require much pruning. The tropical plant maintains its elegant shape and posture throughout the years. However, for varieties with repeat blooming, you’ll need to remove the faded flowers to encourage new blooms to emerge.

That said, you should watch where the seeds fall after the flowers get pollinated. Due to its fast growth rate, this plant tends to spread and establish quickly wherever the soil is rich and there’s enough moisture. If you worry about the invasiveness of the plant, consider deadheading the flowers and trimming the rhizomes annually.

For the most part, the new cultivars of butterfly ginger lily are resistant to most diseases that impact the ginger family. So that’s one less something to worry about. However, pests are not so kind to the plant. Aphids, scale, whiteflies, and mealybugs all feed on the sap in the leaves. Beetles also bore holes in the rhizomes and damage the stalks, leaves, and flowers. So treat the smaller pests with neem oil. As for the large ones, you should pick them up by hand and drown them in a bucket full of water and detergent mix.

How to Store Ginger: Tips and Tricks on Storing Ginger

How To Craft A Butterfly from A Clothespin – Simple Recycling Idea