We’ve been practicing sewing for a while now and we’re pleased to report that we’re getting better and better with every project! Now, we think we’ve finally reached the point where we can start investing in better supplies because we’ve solid in our decision to keep learning and trying new things. Sometimes the quality in your tools can make all the difference in your finished product. That’s why we’ve been on the hunt for higher quality sewing scissors!

We’re the kind of over-analytical shoppers that will do tons of research before we buy essentially anything, so we’re sure it’ll come as no surprise to you that we’ve been pouring over different sewing scissor options online. That’s how we found ourselves with a list of great options that we couldn’t help share, just in case other people are in the market for scissors too! 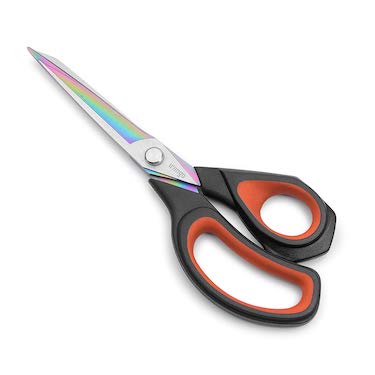 If you’re going to invest new sewing scissors, would you really like to make sure that you get the strongest model possible because you sew quite a lot and you know that you can be a little hard on your things? Then we might have found what you need right off the bat thanks to LIVINGO!

This particular pair of scissors its afforded extra strength thanks to the way its stainless steel blades have been coated in a titanium layer that makes them a little more scratch proof and able to withstand wear and tear. They’re also totally affordable, have soft grip handles, and come with a very handy lifetime warranty! 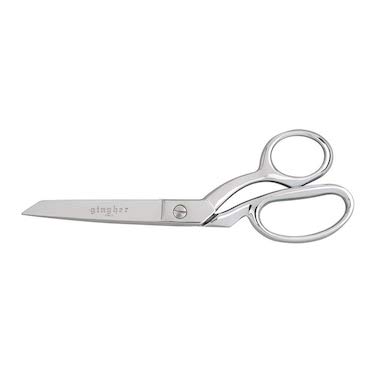 If you’re going to invest in a pair of sewing scissors, are you convinced you’d get along a little better with some much simpler and a little more classic, like the tools your grandmother might have used? Then we’d definitely suggest checking out this pair from Gingher!

Rather than having ergonomic handles and soft grips, the priority in this design is the blades themselves. This model gives you knife-blade style sides that mimic the more traditional dressmaking shears of auld; the kind that will cut through several layers of fabric at once. 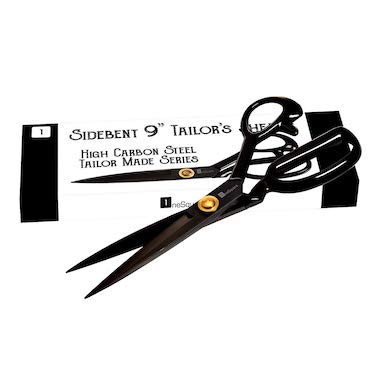 Are you still feeling so intent on getting the strongest kind of sewing scissors possible, because you love working with heavy duty materials like denim or sequins, but you’re just not sure that a mere coating will give you what you need? Then we’d absolutely suggest checking out this model offered by OneSquare!

Even though these scissors are a little bit more expensive, their strength and durability is worth the price an that’s because their materiality is a little bit different. Rather than being made of stainless steel like most of the other options you’ve seen so far, these ultra sharp sewing shears are made from carbon! 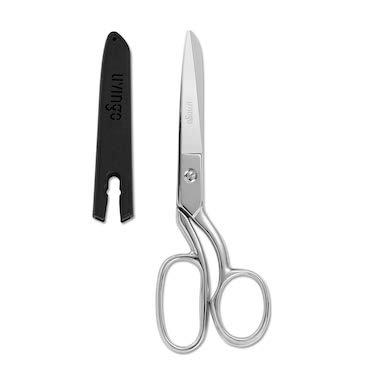 Are you still thinking about your need for heavy duty scissors and you love for the idea of having a more traditional design and materiality, but you’re not sure the dressmaker’s shears we showed you earlier are quite the choice for you? Then we’d suggest checking out what LIVINGO has to offer! 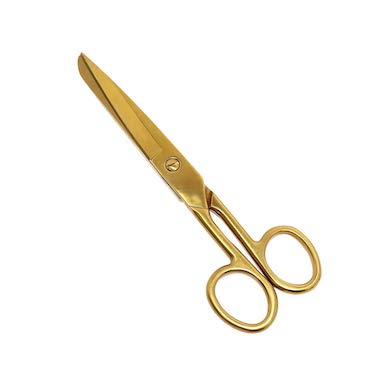 Are you primarily a leather working enthusiast in your sewing endeavours? Are you also the kind of person who appreciates a little aesthetic even in your basic tools? Then maybe you’re the perfect person to pick up these scissors from Buqoo!

Despite their fancy look, these scissors are just as durable as the other steel models you’ve seen so far. The gold is a stylish coating that adds some metallic flair, but it’s also quite durable in itself and finished in a way that isn’t prone to chipping or scratching. 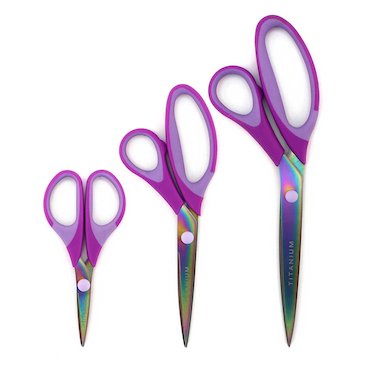 Are you actually scrolling through our list but still finding yourself thinking about the titanium coated soft grip handled scissors you saw earlier, only you can’t help thinking about cute aesthetic options as well? Then we’re pretty sure these sewing scissors from BambooMN were made for you!

The price of this particular set is nothing short of a steal, since you’re actually getting three pairs of sewing and crafting scissors for less than some of the other shears you’ve already seen. In addition to being affordable, each of the three scissors sizes is quite stylish looking thanks to their purple colour, comfortable to use thanks to the soft grip handles, and durable due to the titanium coating on the blades. 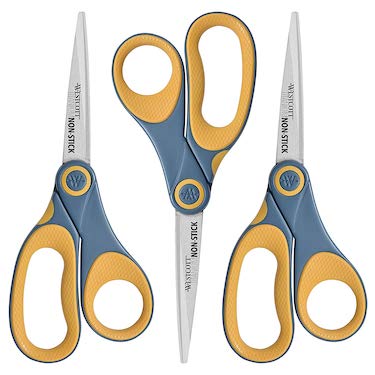 Do you actually already own a very large pair of sewing shears and what you’re really looking for is a simple pair of crafting scissors that you can use for quick trims and thread cutting? Then perhaps you’ll get along a little better with this set from Westcott!

Originally over $40, this set of three pairs is now on sale for just over $10, making it another steal. This sale, however, certainly has nothing to do with the quality of the product itself. These scissors have all the sharpness, comfort, and durability of the shears you’ve seen thus far, but this time in a smaller, straight-blade design. 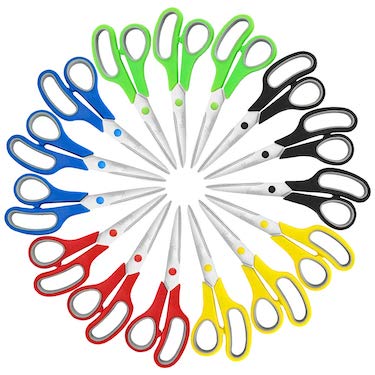 Are you totally loving the idea of buying an entire scissors set because you’re a teacher or sewing group leader and you go through scissors like wild, but you need more than just three pairs? Then we’re pretty sure VERONES has just the set for you!

The style and functionality of these scissors lies somewhere between the large curved shears you’ve seen and the little, straight-blade trimming scissors above. They’re great for fabric cutting and smaller creative projects, but they won’t cut quite so easily through as many layers as some of the larger designs you’ve seen. Even so, we’ll never hate the idea of getting 15 pairs of scissors for $16! 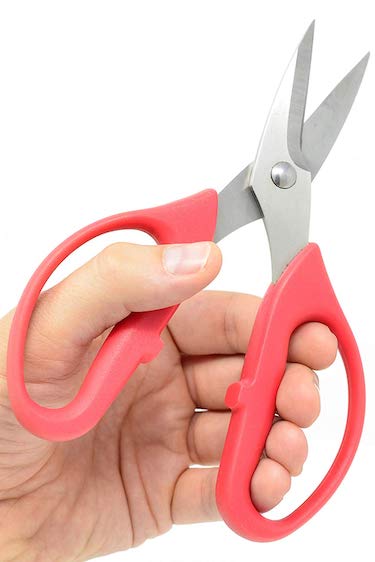 Did we actually really catch your attention when we started talking about the idea of getting scissors that work well on leather because you use it very often indeed? Then perhaps some actual leather scissors, like these ones from ProMaster will serve you better!

Besides the draw of costing less than $10, these scissors are awesome in their design because the sharp, durable blades are specifically intended for precision cutting. Sure, they’re a little smaller than some of the models you’ve seen so far, but their sharpness and shorter length in combination with the comfort of their handles is actually much more effective for careful pattern cutting. 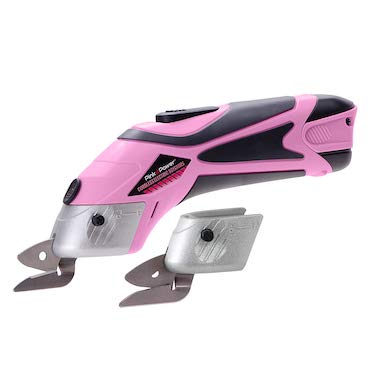 Do you actually do so much fabric cutting for sewing that you can’t help wondering whether there isn’t a faster way to cut out all your pieces in bulk? We made all the dance costumes for our kids’ recitals this year and our hands ached after cutting that much material out. That’s why these electric fabric scissors from Pink Power caught our eye so well!

Besides the fun of these power scissors being pink, this model comes with a durable two hour battery, a blade guard for safety, and enough cutting power to be useful on all kinds of materials rather than just fabric, making them useful for scrapbooking and cardboard cutting as well.

Do you know another fabric crafting enthusiast who could use a quality new set of scissors or shears but who has been hesitating on making a decision? Give them a little more guidance and a few more options to consider by sharing this post with them!