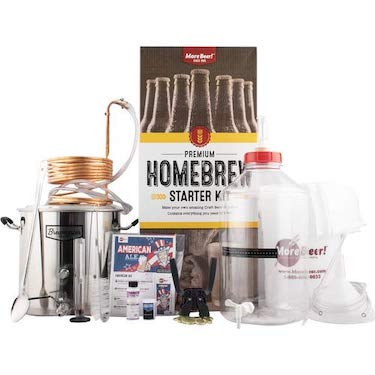 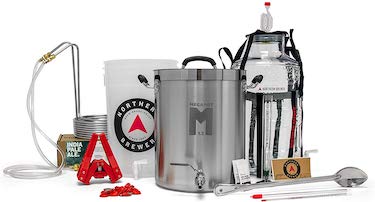 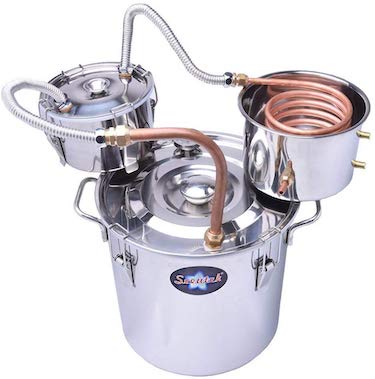 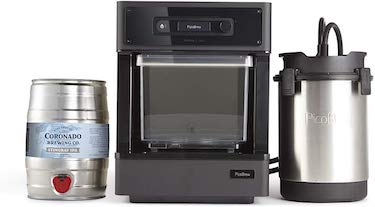 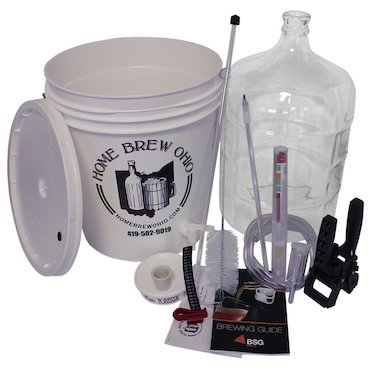 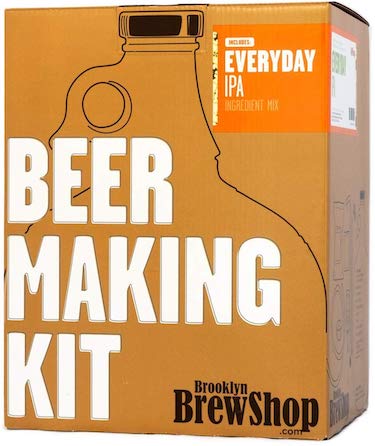 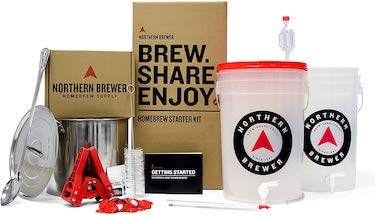 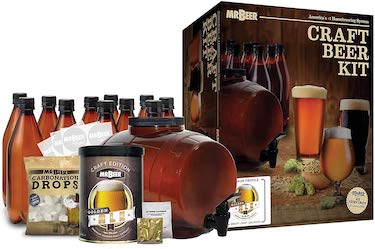 We’ve never been huge drinkers on a regular basis, but if there’s anything in the world of alcoholic beverages that we do enjoy, it’s a unique beer! That’s even more true if there’s some kind of local or homemade element to it. In fact, we love local brews so much that we’ve long been thinking about purchasing a brewing kit and trying our hand at making beer of our very own. Being total beginners at the whole brewing thing, we’ve decided that a fully equipped starter’s kit is the best option for us. If you’re in the same boat but share the interest too, check out these fantastic options that we’ve come across so far in our research!

Now, two gallons might sound like a whole lot of beer at first, before you’ve started, and it actually is for a kit priced as reasonably as this one from Mr Beer, but it’s actually a pretty small beginner’s quantity. We think it’s the perfect sized batch for someone who’s never tried before, so you can tell you like what you’re getting in the end before you make more.

In addition to a perfect starter keg, this kit comes with thorough step by step instructions and all of the other ingredients you’ll need. Unlike many in the same category, the makers of this kit also offer refills for if you want to use it again and a guarantee to ensure that you’re happy with the experience, both of which make the price event better than it sounds initially.

Just in case you’re pretty sure right off the bat that you’d like to make more than just two gallons of beer, here’s an equally simple tp use starter kit that offers you the capacity to make five whole gallons instead courtesy of Northern Brewer!

Rather than just providing you with what you need to make a “beginner’s beer”, this particular kit caters to the actual beer drinkers by giving you a unique amber ale recipe that the company also sells elsewhere as a drink. This gives you the opportunity to make your own batch of their already established beverage, which has notes of toasty bread curst and caramel.

Have you actually been looking into brewing kids primarily for someone else in your life, rather than yourself, because you think it’s something they’ve really appreciate trying but you know they’ve never done so before? Then perhaps a smaller batch would be a better thing to start with, rather than five whole gallons. This one gallon gift set version, also from Northern Brewer, could be a safer choice!

Rather than coming with the ingredients for their flavourful amber ale like you saw before, this version gives you what you need to make a different but equally delicious Chinook IPA, another already established beer that whoever you’re gifting the set to can feel accomplished over making their own batch of. It’s an added bonus that these ingredients are fresh and not canned, like some brands might send in such a small kit.

If you’re going to invest money in a brewing set, would you rather make sure the equipment is diverse and reusable with all kinds of brews and ingredients, even if you want to switch things up lately? Then we think you might do best with this small start’s kit from Brooklyn Brewshop!

While this kit does come with everything you need to make an Everyday IPA as your first batch, it’s also specifically marketed as being a reusable, simple to use kit that’s not exclusive to that particular mix or brand. If you come across another starter pack refill that has notes of something else you think sounds ideal, it’ll work here as well!

Are you actually someone who already gave one of these beginner’s kits or starter packs a try and now, even though you’re not about to go pro or anything, you think you’d like to purchase more reusable equipment so you can keep brewing in the future? Then we’re pretty sure you’ll find what you’re looking for in this fully equipped multi-use kit from Home Brew Ohio!

Rather than providing you ingredients or a starter brew, this company just sends you the quality things you’ll need to brew, then sanitize, and then brew again. The idea is that you’ll find brews and ales you want to try elsewhere and, no matter what you decide on, you’ll have what you need to make it happen each time already in the form of this kit.

This particular device from PicoBrew is for the serial home brewer! The idea here is that you’re still an amateur who isn’t going to package, label, and sell your own brew, but you’ve got your favourite local brews provided by others and you love to brew your very own batches using what they provide, just about as often as you please.

Since it’s something you can use many times, over the course of a number of years, it’s naturally a more expensive option. It does, however, let you keep on brewing the ales you’ve come to love making most, giving you and your guests a slightly new experience every time. This brewer gives you the equivalent of 12 bottles per brew, which is kind of like going to the store and buying a pack. We’d probably take the DIY route too!

If you’re going to invest in a home brewery would you actually also be interested in trying your hand at home distillery too? Well, whether you’re just trying to make sea water more drinkable or distill actual alcohol like the moonshiners do back in the day, then we think you might get a kick out of this distillery system from Suteck!

This particular model lets you distill up to three gallons of liquid at once. It might look a little intimidating, but this same kit is actually the best choice for beginners or people with lots of experience, so at least you know you’ll be able to keep using the same equipment if you decided to keep distilling moving forward!

Are you really liking what Northern Brewer has to offer so far but you’re feeling torn between the full blown maker’s kit and the very beginner’s kit that we showed you earlier? Well, luckily for all of us, there’s actually a design between those two that might be best if you know you want to try it more than once, but you’re not sure you’ll brew forever. It’s this brewery on a box!

This particular kit is specially designed with easy siphons that will help you bottle your beer with even more ease than most beginner kits will offer you. It also comes with a great recipe, which is an even different option than the kits offered by this same brand previously! This time, they’re sending you their IPA recipe called Fresh Squished.

Just in case you’re feeling absolutely determined to make quite a large quantity of home brewed beer on your first go but you’re still not sure that you’ll brew more than once, here’s a great starter’s kit that has an even bigger drum than what you’ve seen so far despite being totally beginner friendly! The MoreBeer home brewing kit lets you make up to eight whole gallons at once.

While this kit is easy to use like the others, it also requires a little more action on your part. This is actually a positive thing, because it feels like you’re really making the beer yourself, rather than just setting it to brew, walking away, and ending up with some beer. You’re really a part of the process!

Do you another DIY enthusiast who has expressed a desire to try their own home brewing kit but who could really use some guidance when it comes to choosing the one that’s best for them? Share this post with them to give them all kinds of information to consider!