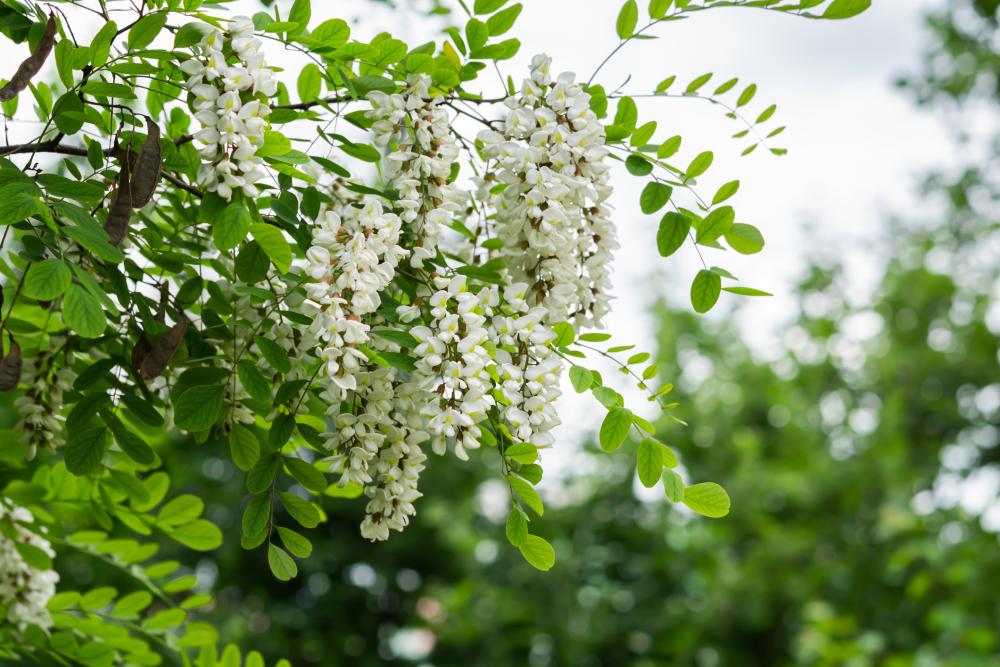 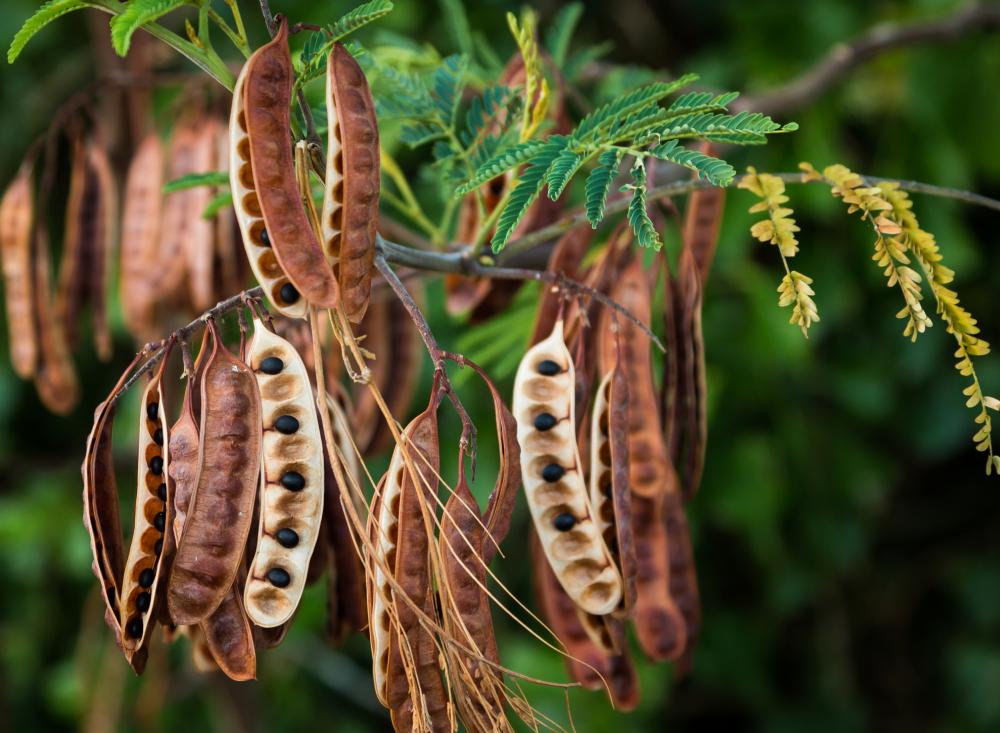 Acacia is an umbrella name for a wide variety of species of trees and genera. Even those genera that are clearly not related to the acacia, such as the genus that grows in Australia, are still bundled under this convenient name.

What this means for you as an aspiring acacia grower is that it can be hard sometimes to tell what is really an acacia species and what isn’t. Moreover, if you plant an “acacia” that is not really an acacia and one that is not native to your part of the world, you might run into some growing problems. This often happens to imported plant species that are not acclimatized to the growing conditions and the hazards of the new region.

We compiled a list of the most popular acacia tree varieties to help you decide on which species to grow in your garden.

This acacia hails from West Australia and goes by many names depending on where it grows. Some of these names include Cujong, orange wattle, blue-leafed wattle, coojong, golden wreath wattle, Western Australian golden wattle. While in Africa, this acacia goes by the name Port Jackson willow.

But whatever you like to call it, the acacia grows in zones 8 to 12 and is not considered a large tree. The mature tree will reach 30 feet tall and about the same in canopy width. It has dense foliage with intricate branch structures. The leaves of the tree are light green and about 10 inches long. As for the blooms, they’re yellow and cover the branches with little fuzzy clusters.

Two things to watch out for with the acacia saligna. The first is that the tree produces sugary nectar that attracts ants. The ants would build an anthill in your garden and refuse to leave. The other issue is that the same ants carry the seeds of the tree and spread them everywhere. This makes the tree somewhat invasive.

The name of this acacia gives away its origins and native habitat. As the second most popular tree in Hawaii, acacia koa is native to Oahu, Maui, and Hawaii. Favoring tropical climates, it grows well in zone 11. The tree can grow to 50 feet tall with a wide-spreading canopy. In the wild, the acacia koa with roots digging deep in volcanic ash can grow to 100 feet with ease. So the more fertile the soil, the better growth you’ll get out of the tree.

The leaves of the tree are shaped like sickles and can reach 9.8 inches long depending on the growing conditions. It’s interesting to note that the leaves of the acacia koa go through many transformations throughout the lifespan of the tree.

As for the flowers, they’re less than an inch in diameter and are pale yellow. In the right conditions, the tree can bloom throughout the year. But don’t expect the acacia koa to pull that feat in your garden. Most likely, it blooms once a year, and by the end of summer, the flowers would have faded.

The tree also produces fruits. These actually are seed pods and average 5.9 inches long and less than one inch in width. The pods are green until they mature and turn brown or black. You can plant the mature seeds as soon as the pod color turns.

Sometimes known as box-leaf wattle, the shrub-like tree is native to Eastern Australia. The mature tree averages between 3 to 13 feet, with a canopy measuring 7 to 12 feet in diameter. The leaves are equally small and won’t grow over 2 inches on a good day. But it’s the flowers that steal the show and turn the shrub into the focus of attention.

The yellow flowers are tiny and grow in clusters of 2 to 14 blooms. They open in July and stay in bloom until November. After pollination, pods of seeds develop in the center of each female flower. Each curved pod is 2.8 inches long and less than a third of an inch in width.

The box-leaf wattle is suitable for zones 7 to 11 and prefers full sun. In their natural habitat in Australia, the tree grows mainly on hills and slopes. So you can use it to prevent landslides and provide some stability to the soil.

The first mention of this shrub was in 1825 when botanist Alan Cunningham gave a full description of the species in his works. It remains one of the favorite acacia species because of its small size, low maintenance, and adaptability to many soils and growing conditions. Also, it’s less invasive than other acacia species on this list.

Another Australian acacia species that has many names, including flax wattle and white wattle. It’s more of a shrub than a tree and grows to about 13 feet in the right conditions. If the growing conditions are not favorable, the white wattle will be a compact shrub measuring a little over 4 feet. But despite that diminutive size, the shrub offers a lot in the way of ornamental values.

The bark is gray and can be either smooth or finely fissured. As for the leaves, they’re not really leaves. Acacias have phyllodes, but we use the term leaves in its widest sense. As an evergreen shrub, the leaves of the white wattle stay in all their green splendor throughout the year.

The shrub gets its name from the small white flowers that bloom in clusters of 6 to 12 flowers. They stay in bloom from June till September every year. After pollination, the seed pods develop and grow to about 4.7 inches long and a half-inch wide. The white wattle grows well in zones 9 to 11, as many of the species are originally from Australia. It requires rich soil, good air circulation, and full sun. If the summer is overly hot in your zone, you can provide partial shade to protect the foliage and blooms of the shrub. 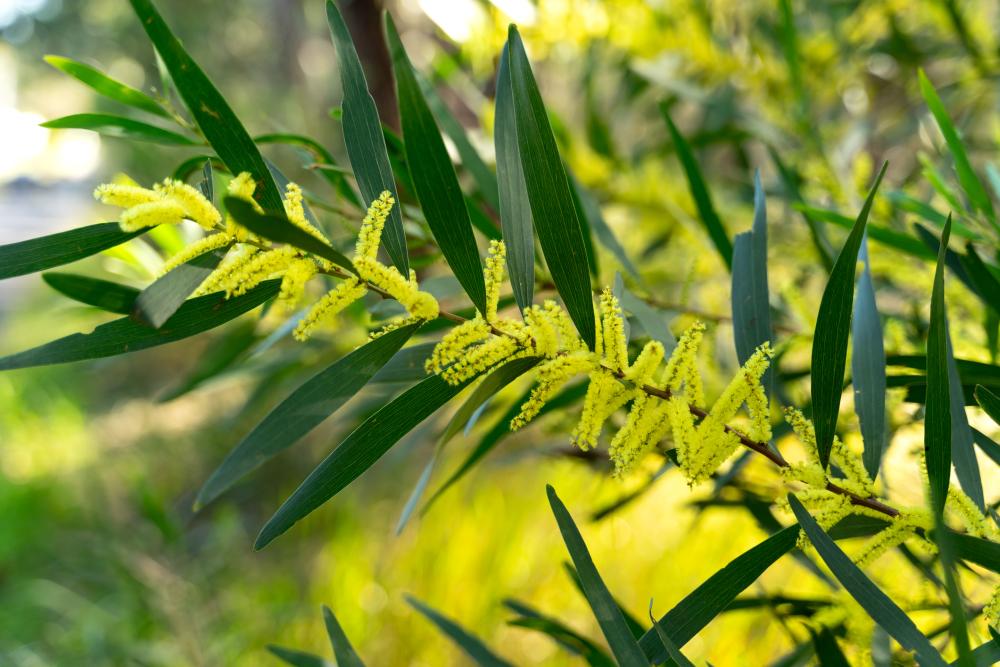 A native to Australia, the acacia longifolia goes by many names. These include Sydney golden wattle, aroma doble, long-leaved wattle, sallow wattle, acacia trinervis, golden wattle, and coast wattle. It grows in other parts of the world as well, including South Africa and Portugal. Outside of Australia, the coast wattle is considered an invasive species, so you need to check with the local authorities in your state about the legal situation of growing this species.

Apart from that, the coast wattle has an amazingly fast growth rate. Within the first 5 years, the tree will tower over 30 feet tall in the right conditions. Only a few acacias can compete with that record. But the acacia also grows as a shrub that will not grow an inch over 26 feet. So you have a lot of options with the coast wattle, and your pruning skills can shape the tree any way you like.

Limited only to zones 9 to 11, this acacia has a low tolerance for cooler climates and will not survive cold winters, especially if the frost is a frequent occurrence. With curved leaves and bright yellow flowers that bloom from June till October of every year, the coast wattle has great ornamental value in the right landscape.

After pollination, the pod seeds develop and reach about 5.9 inches long. They’re either straight or curved and break easily, which helps the seeds to scatter on the ground.

This is one of the most widely cultivated acacias. Originally from Australia, it has made its way to Africa, Europe, and North America, and East Asia. The two common names for this acacia are black wattle and green wattle. It’s not clear why it got the name “green wattle,” considering that all acacias have green foliage.

Similar to acacia longifolia, the black wattle has a fast growth rate. It reaches 50 feet within the first few years of its life and stops growing after that. Both the bark and branches are either dark gray or brown with small fissures. As for the leaves, they’re dark green and grow in pairs.

The flowers, like many acacia species, are yellow and have a woolly texture. They are small and grow in clusters, and have a faint fragrance that you can enjoy if you get close enough to the blooming branches.

Each black wattle tree bears flowers that have both sex organs. Still, the tree needs pollinators to pollinate the flowers in order to produce the seed pods. These seedpods will develop in November and mature over the winter. By January, they’re ripe, and the seeds are ready to grow once they find the right soil.

Whether you call it hickory wattle or lightwood, acacia implexa is a tree worthy of the central spot in every garden and landscape. That’s because the tree has so many properties that make it the right choice for homeowners looking to grow an acacia in the garden or lawn.

On average, the tree height ranges from 16 to 50 feet, with an impressive canopy that spreads to 33 feet in diameter. However, smaller trees can have a canopy that measures 13 feet wide. The bark of the tree is a little rough with gray ridges. The same goes for the ribbed branches. The tree cuts a fine figure with a lot of angles.

This applies to the leaves as well. Rather than have slender, lance-like leaves, the hickory wattle grows curved leaves that look like sickles. They have an impressive length reaching almost 8 inches on a good day. And being thin, their width is less than one inch on average.

The leaves are light green, and since the foliage starts at about the middle of the tree, the trunk, for the most part, looks bare from the middle to the ground. Sometimes the young leaves will have a purple color which makes them shimmer in the sun. But they will turn light green as the leaves reach their full length.

The blooms of the hickory wattle are usually creamy yellow. They take a perfect spherical shape and grow in clusters covering the branches with their woolly texture in large clusters. As long as they’re blooming, the tree is enveloped in a strong and intoxicating fragrance that you can smell a few houses down.

The seed pods of the hickory wattle grow to reach about 10 inches in length and about a quarter-inch wide. Since they’re brittle, they break easily, producing a lot of dust. That dust can be a health hazard if inhaled in large quantities. So you should avoid getting close to the tree or even being downwind from a hickory wattle when the seed pods are mature.

Acacia Growing Problems And How To Solve Them