Q. I opened a can of evaporated milk because I needed a little bit for a recipe I was making. I didn’t use the whole can, and now I’m not sure what to do with the rest of it. It’s not an ingredient that I use frequently, and I don’t think my kids will drink it if I mix it up with water. I would like to be able to store it until I need some of it again for another recipe. The problem is that I probably won’t need it again until after the best before date has passed. I’m curious to know, can you freeze evaporated milk? 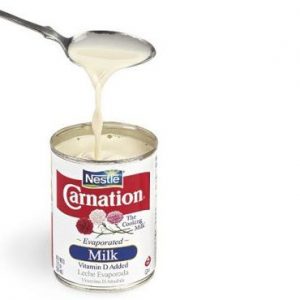 How to Freeze Evaporated Milk?

To freeze mixed evaporated milk is trickier. Evaporated milk has a tendency to change consistency after being frozen and then thawed. The water separates, leaving the mixture grainy. Unlike other types of milk, it is very difficult to reincorporate the milk back to its original state. It will not be suitable to use as milk to drink, but it may still be used with success in certain recipes. The less time that evaporated milk stays frozen, the less the quality disintegrates.

How to Thaw Evaporated Milk?

To thaw frozen evaporated milk, remove the milk from the freezer and allow it to thaw in the fridge overnight. Then, whisk or vigorously shake or stir the milk to reincorporate it as much as possible. It can then be added to recipes that will be cooked, such as baked goods or casseroles. Use thawed evaporated milk within 24 hours for best results, and never refreeze previously frozen evaporated milk.

How to Store Breast Milk: Tips and Tricks to Keep the Milk for Longer

Can You Freeze Condensed Milk? Here’s How You Can Do This