The tropical Calathea is an exquisite plant that you can grow both indoors and outdoors. However, indoors, either as an office plant or in your house, it seems to do much better than if you grow it in the garden. Apart from their ornamental values, Calathea plants do a great job cleaning up the air, absorbing carbon dioxide, and trapping the dust with their large waxy leaves. They also improve the humidity in the place protecting you and your family against dry skin and respiratory diseases. 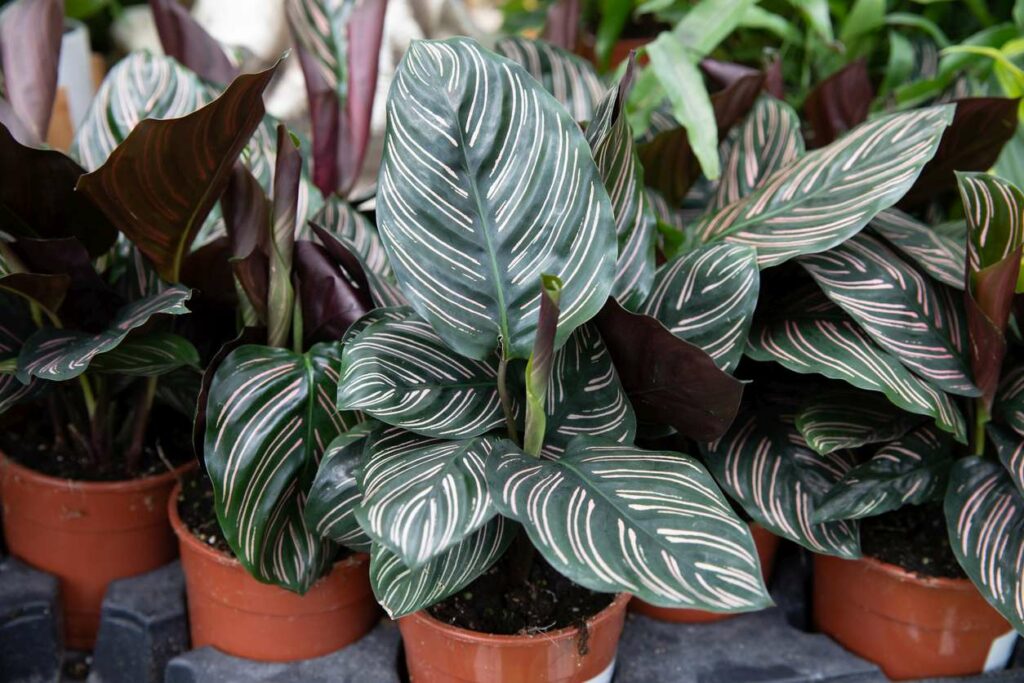 The Calathea is one of those plants that when you take care of them, they pay you back dividends. So let’s see how you can grow and care for the Calathea.

Calathea Plant at a Glance

The oblong leaves of the Calathea are probably the first thing that gets your attention. The markings on the dark green leaves are almost hypnotic. It’s no wonder the Calathea is a popular plant around offices and in many living rooms. It comes in different colors and has a calming effect that fits in many settings.

A native of the tropical forests of South America, the Calathea is a perennial plant known by many other names. Among them, the rattlesnake plant, zebra plant, and peacock plant are the most common. Fully mature, the plant reaches about 3 feet in height and 2 feet in width. This means you can practically place them on a window sill if you like or even as the centerpiece on a table in the living room.

Calathea plants can grow outdoors if you have the right weather conditions. In Hawaii and the Florida Panhandle, people often grow it in pots in their garden without any issues. When the weather gets cold, they move them indoors.

Naturally, you’d always want to have a different Calathea than the one your neighbor has in their house or the one your coworker grows in their office. The good news is you have over 300 species of Calathea plants to choose from. Each has its own set of patterns, markings, and color schemes. However, not all those varieties are available in your local nursery or even online. Some are rare species that only grow in special horticultural labs. Here are the common ones.

How to Grow Calathea Plant

So far we have talked about the benefits of growing the Calathea as a houseplant or one that adorns your office. But did you know that you could also plant it in your garden? Here we’ll cover both indoor and outdoor growing of the Calathea plant.

This is the most convenient way to grow Calathea since you have more control over the weather, light, and humidity levels. The steps are rather simple.

Calathea in the Garden

Even though the process is almost identical, growing Calathea outdoors means you have to pay attention to the weather and things like shade and whether the sun will cover the plant or not.

Calathea care is a little bit more complex than growing it. That’s understandable. So let’s get to the maintenance part and see how you can take care of the Calathea plant and keep it growing successfully.

The best type of light for this tropical plant is a filtered one. Direct sunlight hurts the leaves while dim light doesn’t encourage its growth either. If you place it on a window sill that gets a lot of sunlight, consider using a thin curtain to shield the plant from the glare. If you grow it outdoors, then in the shade of a tree sounds like the right spot for your Calathea.

How much water your Calathea needs depend on whether you grow it indoors or outdoors and what time of the year it is. Indoors, where the temperature is mostly stable and controlled, you won’t need to water it more than once a week during the summer and even less when the weather gets cooler. Outdoors, it’s a different story. The summer heat makes the soil go dry faster and the Calathea plant is a thirsty plant. So try to keep the soil moist but not wet. Wait for it to go dry before you water it again. But don’t let it go dry for long otherwise the leaves will droop and wilt away.

Warmth and humidity are key factors in the success of the Calathea. As natives of Brazil and the Amazon Rainforest, they’re used to high levels of moisture in the air and warm temperature. It’s one of the reasons that growing the Calathea indoors is often preferred over planting it in the garden. However, if the plant is near a heat vent and you feel there’s not enough humidity in the room or office, you can mist it with a spray bottle once every couple of days. Make sure to spray it in the morning so that the water will have time to evaporate without causing problems such as fungal infestation.

Luckily, the waxy leaves of the Calathea attract dust and absorb carbon dioxide but that’s all they attract. Pests and bugs don’t find the thick leaves particularly juicy so they leave it alone. The usual aphids and mealybugs stay clear. Except for the fungus gnats. These tiny bugs can make a really big mess and cause serious damage to the otherwise healthy leaves. They are attracted to the wet soil. So hold the watering and spraying for a while until the soil goes dry.

The other issue you might have is the brown leaf tips disease. It’s often caused by low levels of humidity. Spray the plant more often with water making sure it goes dry during the day and not pile up on the leaves and cause a fungal infestation.

Calathea Types: 7 Varieties of the Calathea Plant for Your Home